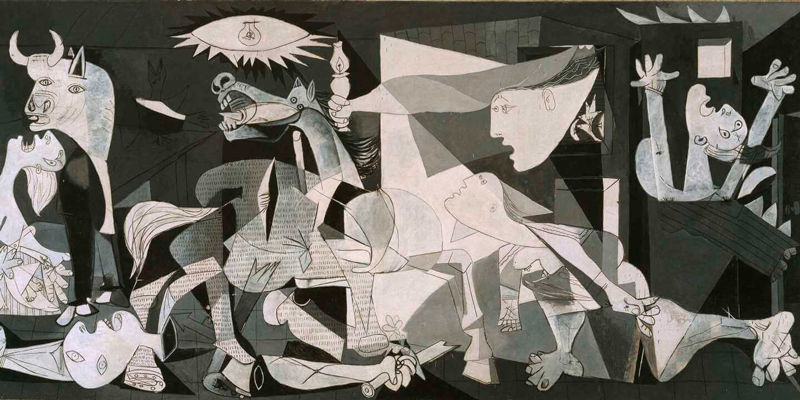 War crimes investigators in Ukraine say violations of international laws and conventions by invading Russian soldiers are so grievous and widespread that they have had to limit their focus to only the worst cases.

Investigators from the non-governmental organization Truth Hounds have been documenting war crimes in the country since 2014, when Moscow annexed the Crimean Peninsula and non-uniformed Russian troops began fighting alongside Russian-speaking separatists in the Donbas region of eastern Ukraine.

They say the rate of violations has increased precipitously since more than 150,000 Russian troops began crossing into Ukraine on Feb. 24.

Fear was widespread that the Russians would commit war crimes, said the NGO’s Ukrainian executive director, Roman Avramenko, in an interview with Legion Magazine.

“But we didn’t expect that the number and range of crimes would be so high,” he said. “We’re well-acquainted with [the situation]. Despite this fact, we are shocked by the brutality and the scale of the crimes Russians are conducting during this invasion. It is clear to us that war crime is the way of warfare for Russia.” 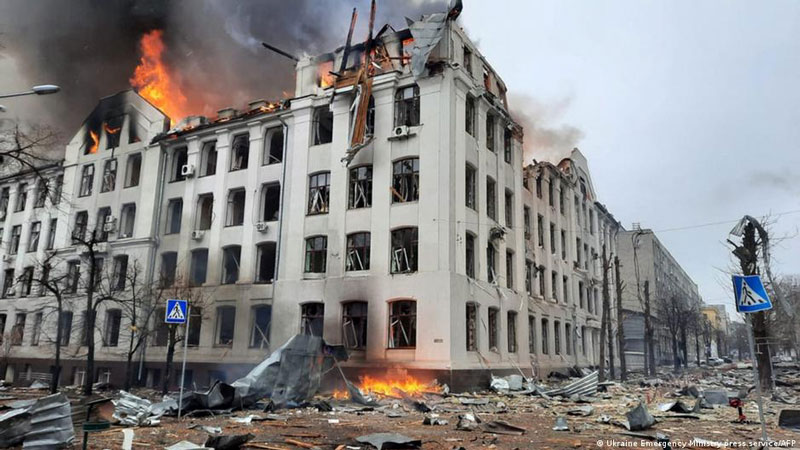 Kharkiv’s police building lies in ruin after Russian shelling. War crimes investigators say they’re shocked by the scale of Russian war crimes in Ukraine.
Ukraine Emergency Ministry Press Service
As of April 6, the United Nations human rights office said it had verified 1,480 civilian deaths in Ukraine since the war started; another 2,115 civilians were confirmed wounded. The actual numbers could be much higher.

Ukrainian Deputy Prime Minister Iryna Vereshchuk said on March 28 that Russian troops had moved 40,000 residents out of the country. A Mariupol refugee said from Russia: “All of us were taken forcibly.”

“The number of those crimes…just exploded.”

Avramenko said in some cases passports and other documents were seized and the residents shipped off by train to remote regions of Russia. “We’re not sure how these people will be able to come back without documents.”

“We tried to document each and every war crime that was committed by Russians,” said Koval. “But after the first week, it became impossible for us to document, to report on every crime. The number of those crimes…just exploded.” 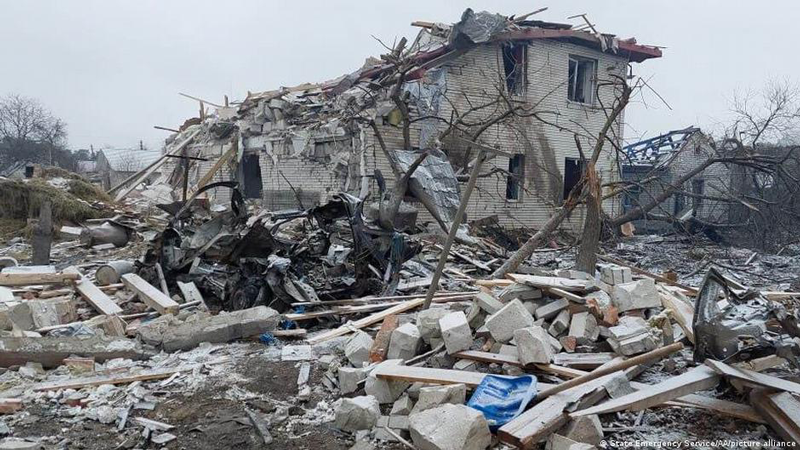 The group decided to focus on high-casualty incidents and those involving significant damage to civilian infrastructure, along with cases where large numbers of people were put at risk as human shields and or due to environmental abuses.

Koval said the fact that Russia, with its superior numbers and equipment, has so far been unable to achieve its objectives in Ukraine has “influenced the number of crimes they are committing.”

“There is basis to believe that Russia uses starvation as a method of warfare,” said Avramenko, who has conducted more than 60 field monitoring missions in Ukraine and other conflict zones. 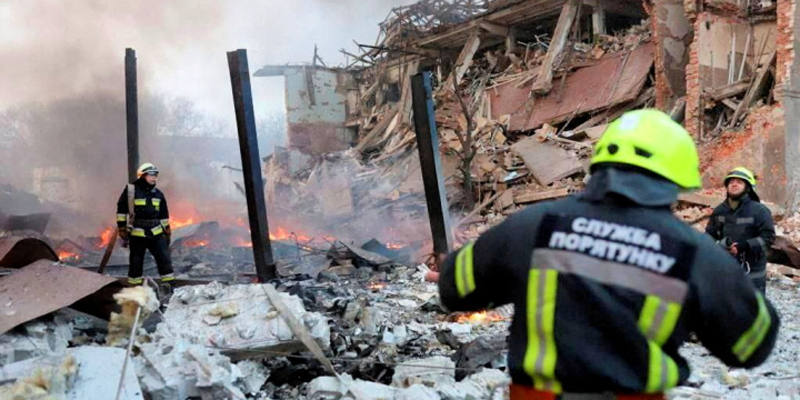 Rescue workers in the Ukrainian city of Dnipro search for survivors in the rubble of an apartment building hit by a Russian airstrike.
State Emergency Service of Ukraine
Hundreds of bodies were found over the April 1 weekend in the Kyiv suburb of Bucha, some with their hands bound behind their backs. Ukrainian President Volodymyr Zelenskyy labelled Russian troops “murderers, torturers and rapists” and referred to the killings as “genocide.”

“Those responsible for these egregious and appalling attacks will be brought to justice,” he said.

Avramenko said house-to-house searches and illegal detentions of civilians, including activists and elected officials, are widespread. Additionally, he suggested widely disseminated videos showing Russian tanks firing on civilian vehicles are not isolated incidents, nor are they cases of collateral damage or mistaken identity.

In some areas, “they shoot at everything that moves,” he said, noting that holes concentrated in the driver’s-side windows of vehicles prove they were targeted.

“They were aiming through the windshield at the seat of the driver,” said Avramenko. “There are many, many photos available of bullet holes, so you can clearly see this was not shelling of the territory and this can’t be counted as collateral damage, for sure.

“They saw it was a civilian car and they aimed at a civilian car with the purpose to kill civilians. Many children, many women died in these incidents across the country.”

War crimes are not necessarily as cut-and-dried as they might appear.

Distinguishing between targeted civilian infrastructure and collateral damage, however, can be difficult, though Koval said it becomes evident a hospital is being targeted when it’s hit several times. The entire city of Mariupol in eastern Ukraine has been virtually flattened.

“They continue using the same tactics, the same targeting of densely populated areas and cities,” he said. “It shows that there is a pattern of absolute ignorance of the laws and customs of war.

“These patterns and the types of weapons that are used help us to conclude that sometimes we are really speaking about war crimes.”

Still, war crimes are not necessarily as cut-and-dried as they might appear. The crimes may be evident, but tying them to a specific unit or person, much less President Vladimir Putin, and holding them to account is challenging and requires painstaking investigation and substantial evidence.

Truth Hounds is already working on a submission to the International Criminal Court in The Hague, the chief arbiter of war crimes cases to which 124 countries, including Canada, are party.

They will also make submissions to Ukraine’s national prosecution service and third-party countries who may claim universal jurisdiction over crimes committed in Ukraine. The principle provides authority to national courts to investigate and prosecute international crimes committed on foreign territory by foreign nationals.

“There are signs and signals from several jurisdictions that they are ready to pursue these types of cases,” said Koval, citing the Czech Republic, Poland, France, Switzerland and several Baltic states.

The lack of concrete action has only encouraged the Russian invasion.

No indictments have yet been handed down over the fighting in Ukraine, despite the fact it has continued for eight years. The ICC’s preliminary investigation into Russian-backed fighting in eastern Ukraine’s Donbas region took six years.

Avramenko said the lack of concrete action has only encouraged the Russian invasion and the increasing number of war crimes it has spawned.

If the international community doesn’t act now, he said, “it would be the most discouraging thing in our work.” 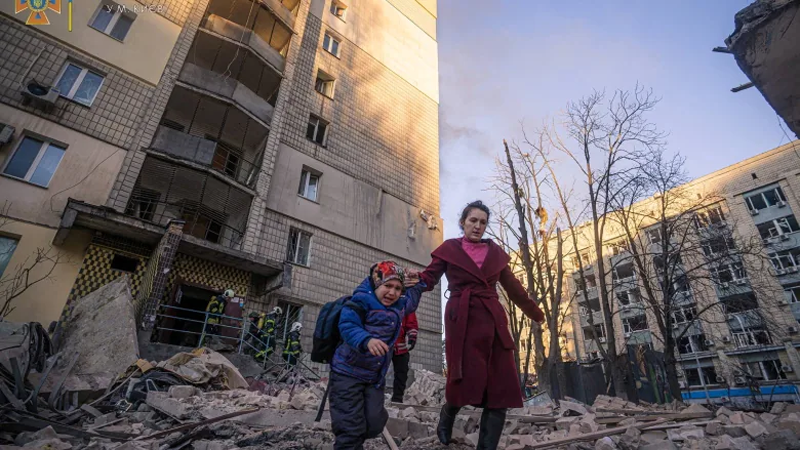 A woman and child evacuate from a residential building damaged by shelling from Russian forces in March 2022.
State Emergency Service of Ukraine
“It would tell us: ‘Guys, this eight years of your life, you put your efforts and your health, you have been under the shelling and you have been many times in the scope of the snipers, you’ve travelled thousands of kilometres across Ukraine in hot sun and freezing winter [documenting war crimes], this was all just for nothing.’”

Truth Hounds is always in need of money, investigators and equipment but, critically, Avramenko said, “we need the reaction, the strong reaction, and we need strong democracy efforts toward these issues that we document and investigate.”

That, he says, requires communications support to get their message out to decision-makers and others.

Koval is from western Ukraine; Avramenko is from the east. Both worry for relatives in occupied areas. During the interview, Avramenko was sitting in his car outside a distribution point, waiting to collect first-aid kits for his brother on the front line—and figuring out the safest route to get there.

“The human being is a beast that can accommodate any circumstances,” he said. “It takes very much of our inner resources. I am so much worried about [family] because they could be shot or the women could be raped.

“No one is talking about diapers anymore. They lack food to eat.”

Said Koval: “The work helps us distance ourselves from the reality and concentrate on the part that we can change.”

An award-winning journalist, editor and photographer. He has reported on the downfall of South African apartheid and from war fronts in Kosovo and Afghanistan.
All Posts
PrevPrevious ArticleTheir own medicine: Ill-equipped Russians betrayed by old ally
Next Article‘Why not?’ A Canadian sniper in UkraineNext