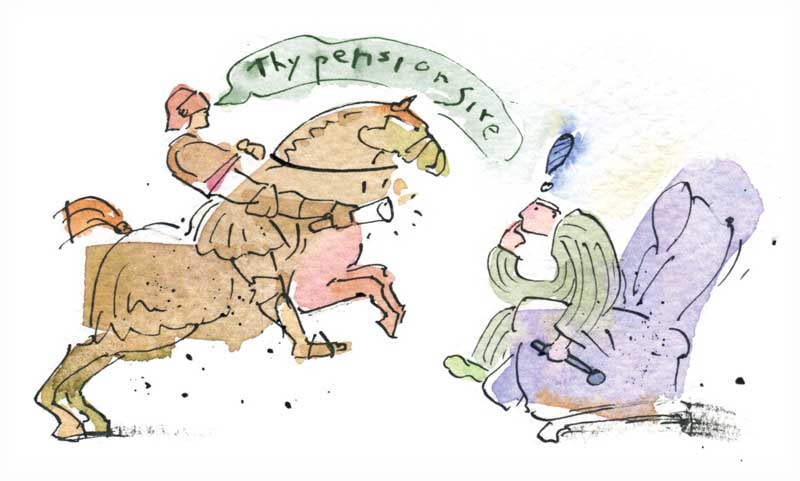 Lieutenant-Colonel Robert Maclaren of the British army thought he had hit it big.

When he retired in 2001, Maclaren received a letter from the Ministry of Defence detailing his pension benefits and the tax-free lump sum to which he was entitled. The ministry noted that he had been commissioned a second lieutenant on Feb. 1, 1366, and his payout, based on years of service, would total 68,500 pounds.

Maclaren, considering the 635 years of service the ministry had credited to him, did his own calculations and replied to say his benefit should actually be 6,427,586,619.47 pounds and that he was awaiting the cheque.

In due course, the ministry followed up to say its records showed him to be the surviving officer of a number of campaigns, including the Wars of the Roses and the Napoleonic, Crimean and Boer wars, as well as the battles of Bosworth Field, Waterloo and the Charge of the Light Brigade.

“We would, therefore, wish to know what happened to the following, which do not appear to have been returned to Stores by you on completion of operations.” The letter listed, among other missing items, 9,765 cannons, 127,345 rifles with bayonets, 28,987 horses and three complete marching bands with instruments.

“We have, therefore, subtracted this sum from your lump sum, leaving a residual amount of £68,500, for which you will receive a cheque in due course.”

Retired sergeant Billy Neville of the 3rd Battalion, Royal Canadian Regiment passed along a tale from his NATO days in Germany.

His company was on a week-long patrol exercise that left the troops tired and, after five days without showering, odourous. Early Friday morning, they were waiting for the bus that would return them to Canadian Forces Base Baden-Soellingen.

The warrant officer heard a bus coming up the highway and jumped onto the road waving his rifle. The vehicle stopped and the men piled in. As he boarded, Neville thought the driver looked nervous, but he ignored it, thinking of the weekend ahead.

At the time, German bus drivers typically sold snacks and soft drinks for a little extra cash. This driver didn’t speak English, but the troops used gestures to ask for chips and pop. Oddly, he didn’t charge them.

An hour later, the bus arrived at the base and the troops went off to return weapons and clean their kits.

“All of a sudden,” noted Neville, “the German police and MPs show up.”

It turned out that the bus they had flagged down at gunpoint was not their ride. It had been on its way to pick up children for school.

“When asked by the German police why he didn’t say anything,” reported Neville, “he responded that ‘when I see people waving guns in the middle of the road for me to stop, I stop and take them where they want to go.’”

The incident made the TV news in Germany—and left the participants with a great story.

Richard Jones was with the Royal Canadian Dragoons in Germany in 1977. During one exercise, he and his fellow soldiers went days without really washing, until the regimental sergeant major found a small soccer field that included a clubhouse with change rooms and showers. He arranged for the Canadians to bathe, shave and generally spruce up.

Jones walked out of his shower and asked his buddies if there were more sinks to shave at. One fellow pointed to a door. Jones, naked, grabbed a shaving kit in one hand and towel in the other and went through the door right into the clubhouse…bar. In front of him sat four women, obviously intrigued by this surprising development. An embarrassed Jones managed a quick about-face and marched back into the change room to the laughter of his comrades.

There are oddities in military ranks. Why does a lieutenant-general outrank a major-general? Why are there rear-admirals but no front-admirals? There are actually logical explanations.

At one time, the highest ranking military leaders were known as captain-generals. They were assisted by lieutenant-generals. The next rank down was sergeant-major-general. Over the years, captain was dropped from the top rank and sergeant was dropped from the next. And brigadiers are either the lowest rank of general or a sort of very senior colonel, depending on the army.

As for the navy, the top position was admiral, which was assisted by a vice-admiral (like a vice-president). In the days of sail, warships fought in long lines, with orders being passed on by signal flags. Because the ships at the back of the line might have trouble seeing the communications, they got their own admiral—a rear-admiral.