Researcher finds much to study in Invictus Games 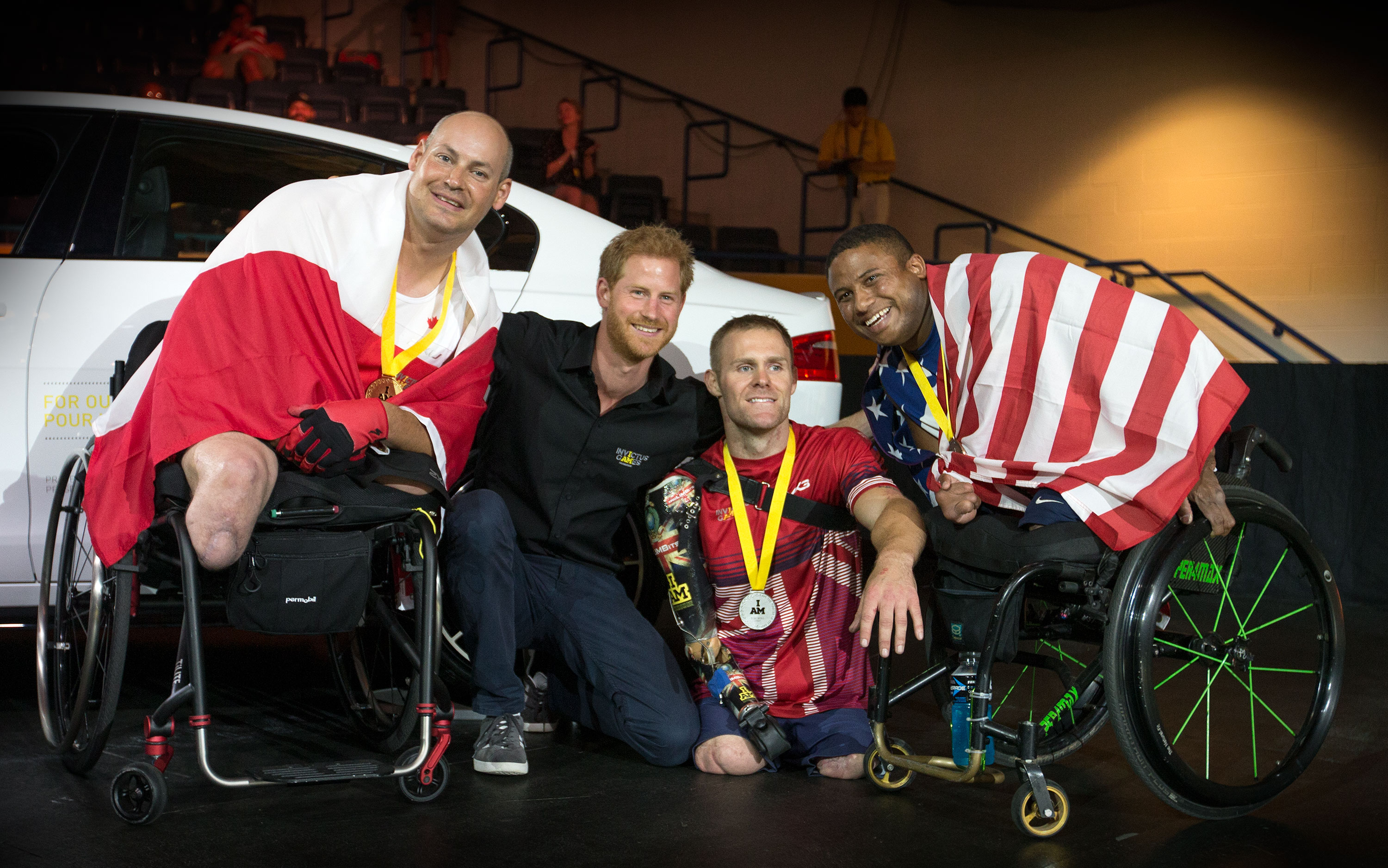 Nevertheless, the most important element of Celina Shirazipour’s work may come down the road, when she determines and likely influences the long-term benefits of participation in the Invictus Games.

Delivered at a conference on military health issues held in conjunction with the Games in Toronto, her research acknowledges that it’s a well-established fact that adaptive sport has multiple short-term physical, psychological and social benefits. 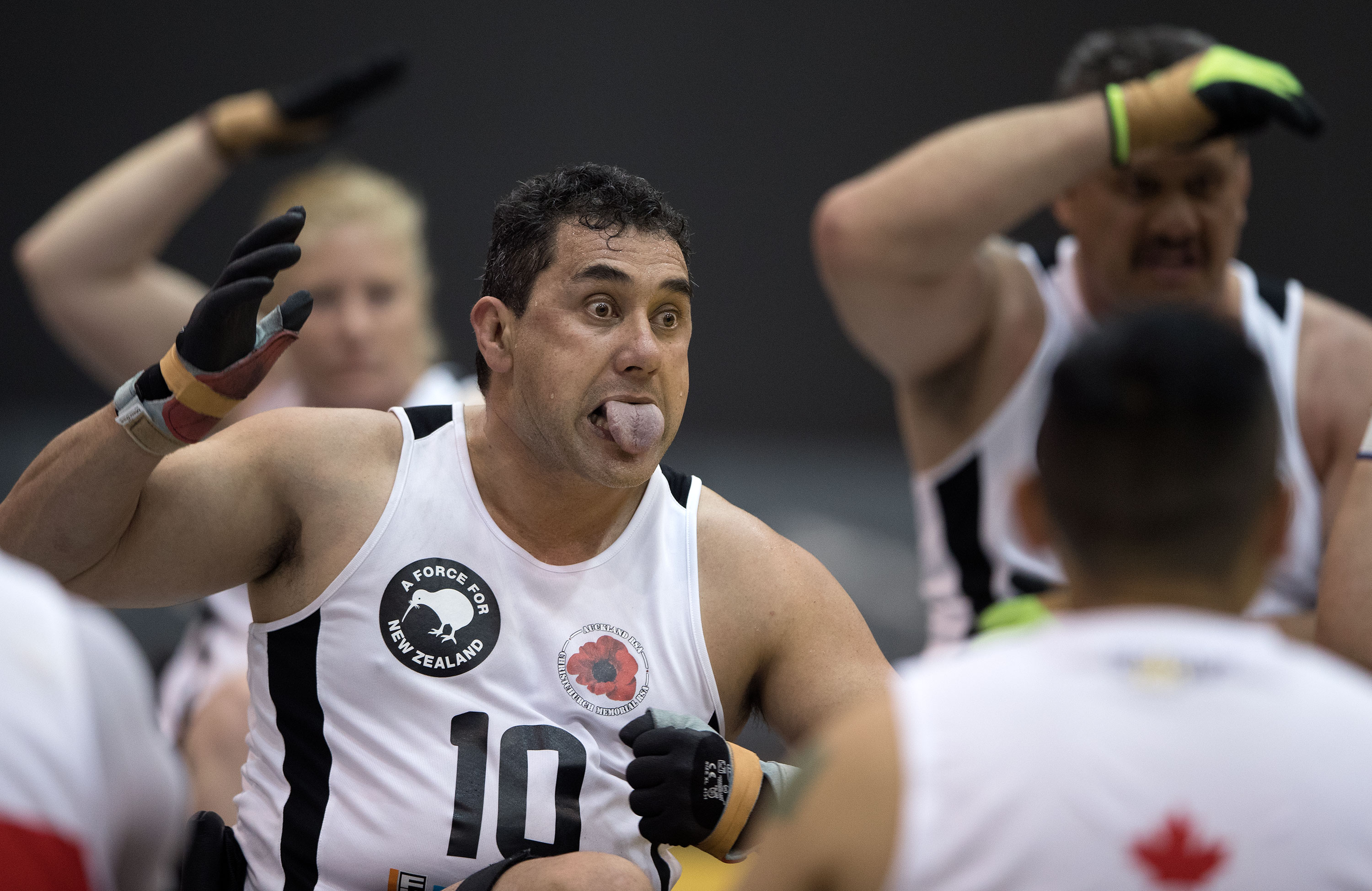 Jason Pore and the rest of New Zealand’s wheelchair rugby team perform the haka for their Canadian opponents prior to their match at the 2017 Invictus Games in Toronto. New Zealand won 22-7.
Stephen J. Thorne/Legion Magazine
Yet past studies haven’t delved into the long-term impact of sport, how benefits are achieved, how they affect families and how participation, particularly in an event like the Games, can shape public opinion of service members and veterans.

“Above all, there has yet to be a comprehensive study of a competitive sport event developed specifically for service members and veterans, such as the Invictus Games,” says a summary of Shirazipour’s preliminary findings. 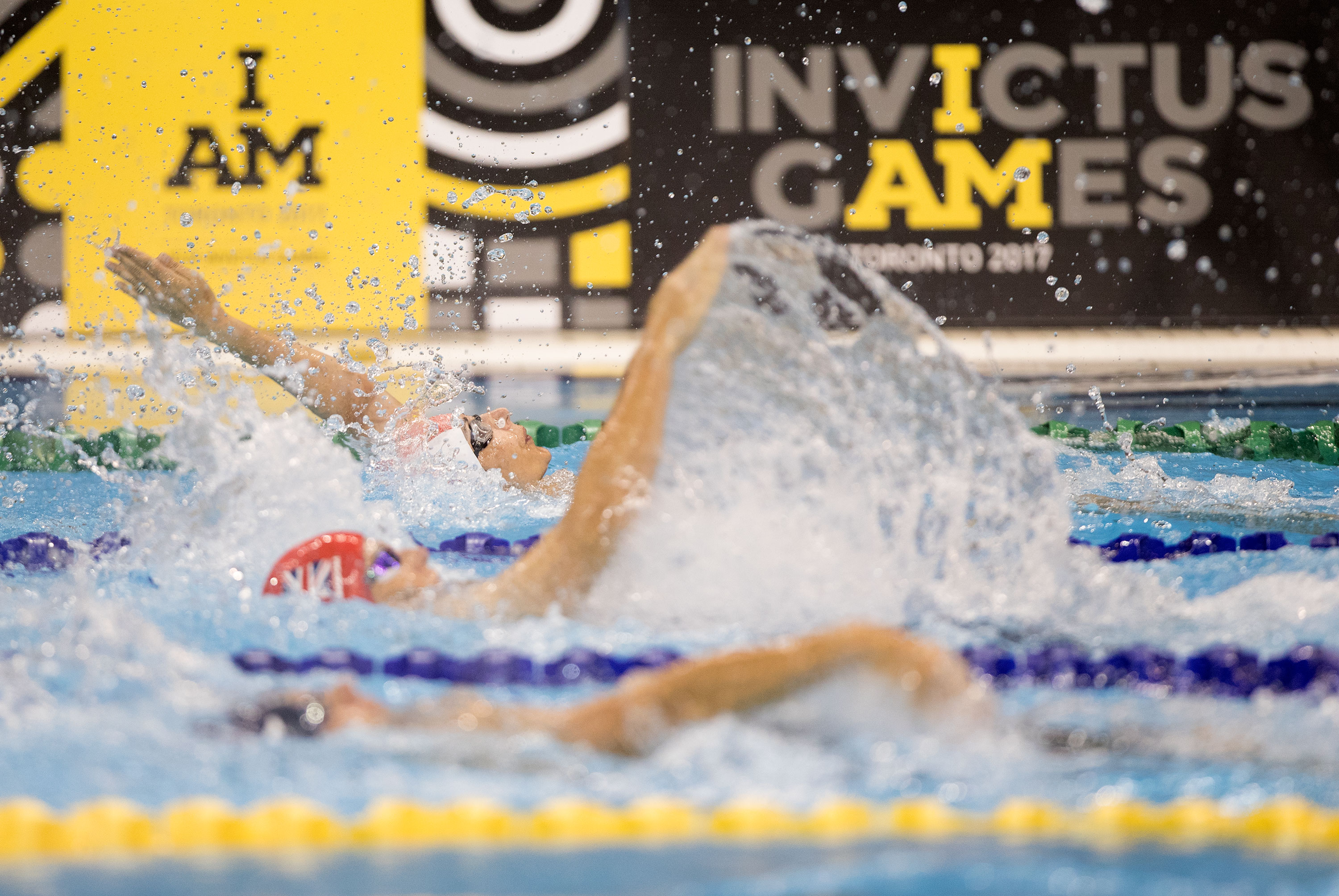 Canadian Isabelle Boutin (far lane) competes in the women’s ISC 50-metre backstroke at the 2017 Invictus Games in Toronto.
Stephen J. Thorne/Legion Magazine
The Dalhousie University faculty of health researcher interviewed 25 former Invictus athletes who competed in London, England, and Orlando, Florida, and 15 more who were in Toronto—28 men and 12 women from seven countries.

Her long-term findings could be key to future Invictus-related programming.

While the earlier competitors participated in one interview apiece, the Toronto participants were to do two further interviews—one after the Games, and one three months down the road.

“This study will determine whether competitors have quality sport experiences, and provide evidence highlighting how sport participation may support short- and long-term well-being,” says the document. 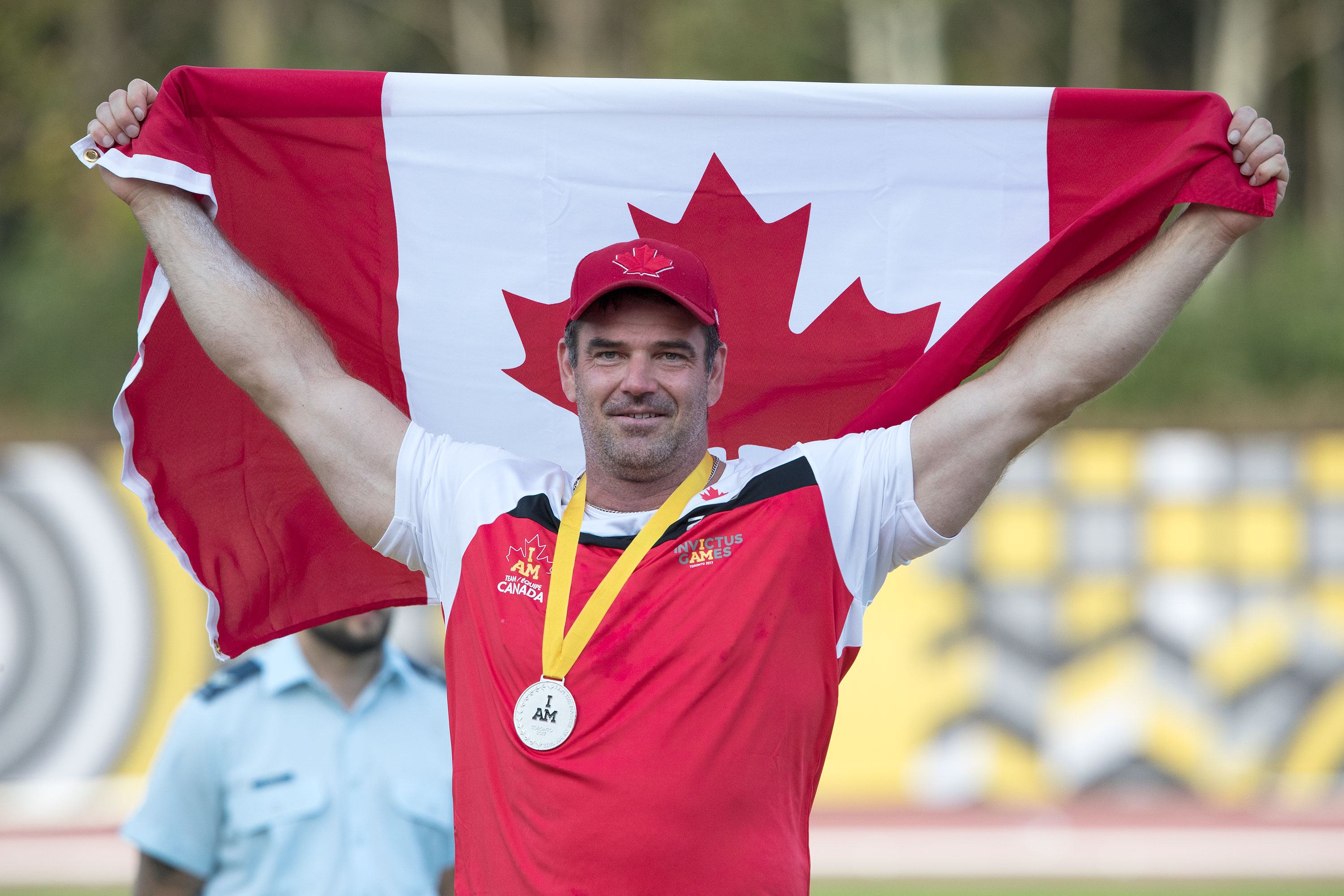 Bruce Matthews, a retired corporal from Innisfil, Ont., won two gold medals at indoor rowing and silver medals in shotput and discus.
Stephen J. Thorne/Legion Magazine
“Findings will also provide information about participants’ thoughts at each stage of participation: during training, during competition, and in the time after the Games.”

Not surprisingly, Shirazipour reports an overwhelming appreciation for the Games. Several participants described them as a gift from the heavens. “Most notably, one Toronto 2017 competitor noted that he believes that training for Toronto 2017 had stopped him from committing suicide.”

Shirazipour found many Invictus athletes struggled with life after illness and injury. Isolated and depressed, they looked to the Games as a way to change their lives. 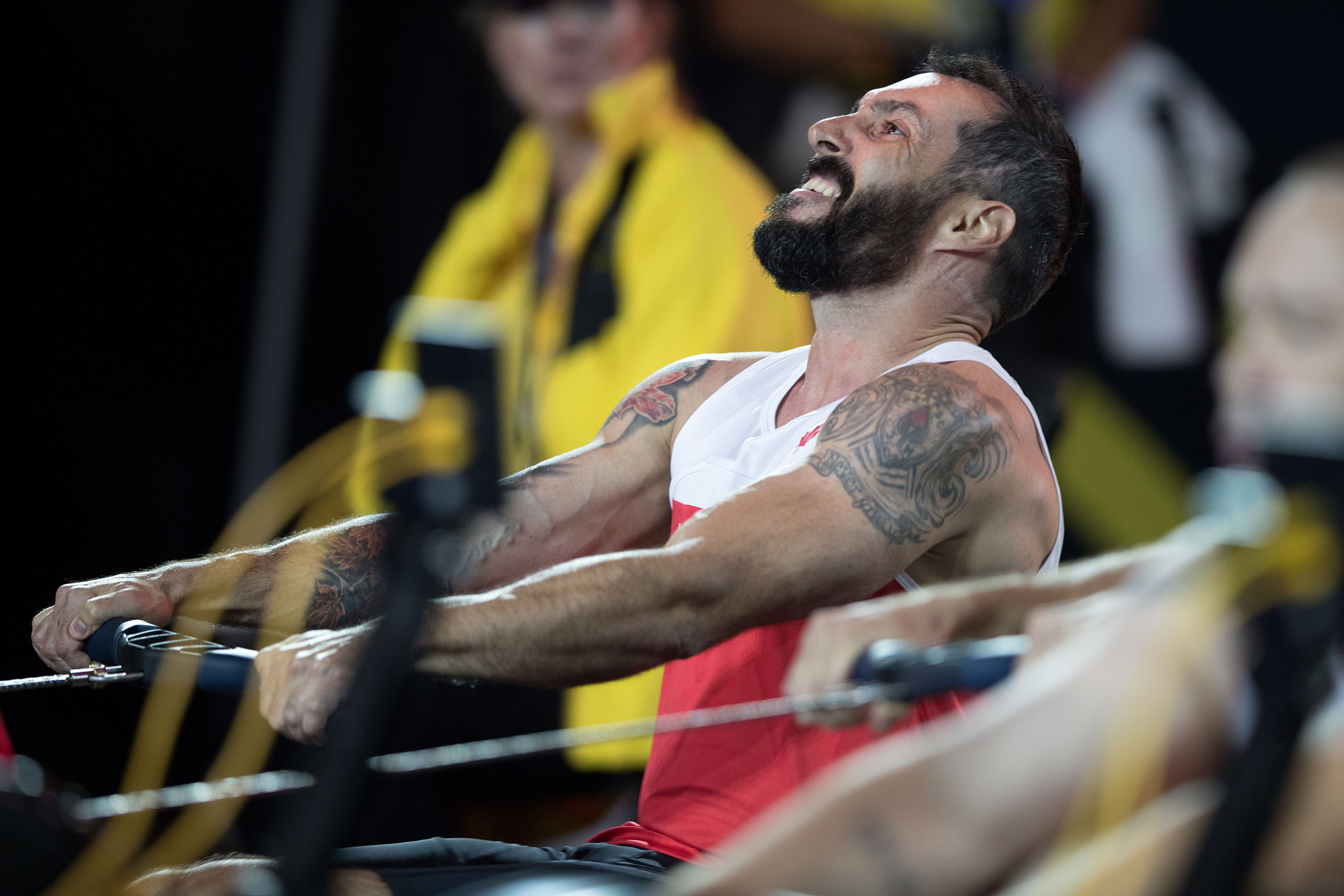 Andre Girard, a Vandoos corporal, now retired, who survived a sniper’s bullet through the forehead in Afghanistan in 2007, competes in indoor rowing at the 2017 Invictus Games.
Stephen J. Thorne/Legion Magazine
They were attracted by the fact that the Games are different—both skill-wise and in that they offer the chance to compete and socialize with “their military family.”

As their training progressed, their physical and mental health improved. The camaraderie, representing their country and feeling public appreciation and recognition first-hand eased anxieties and boosted confidence and self-esteem.

The latter were particularly valued by veterans who couldn’t leave the service on their own terms. 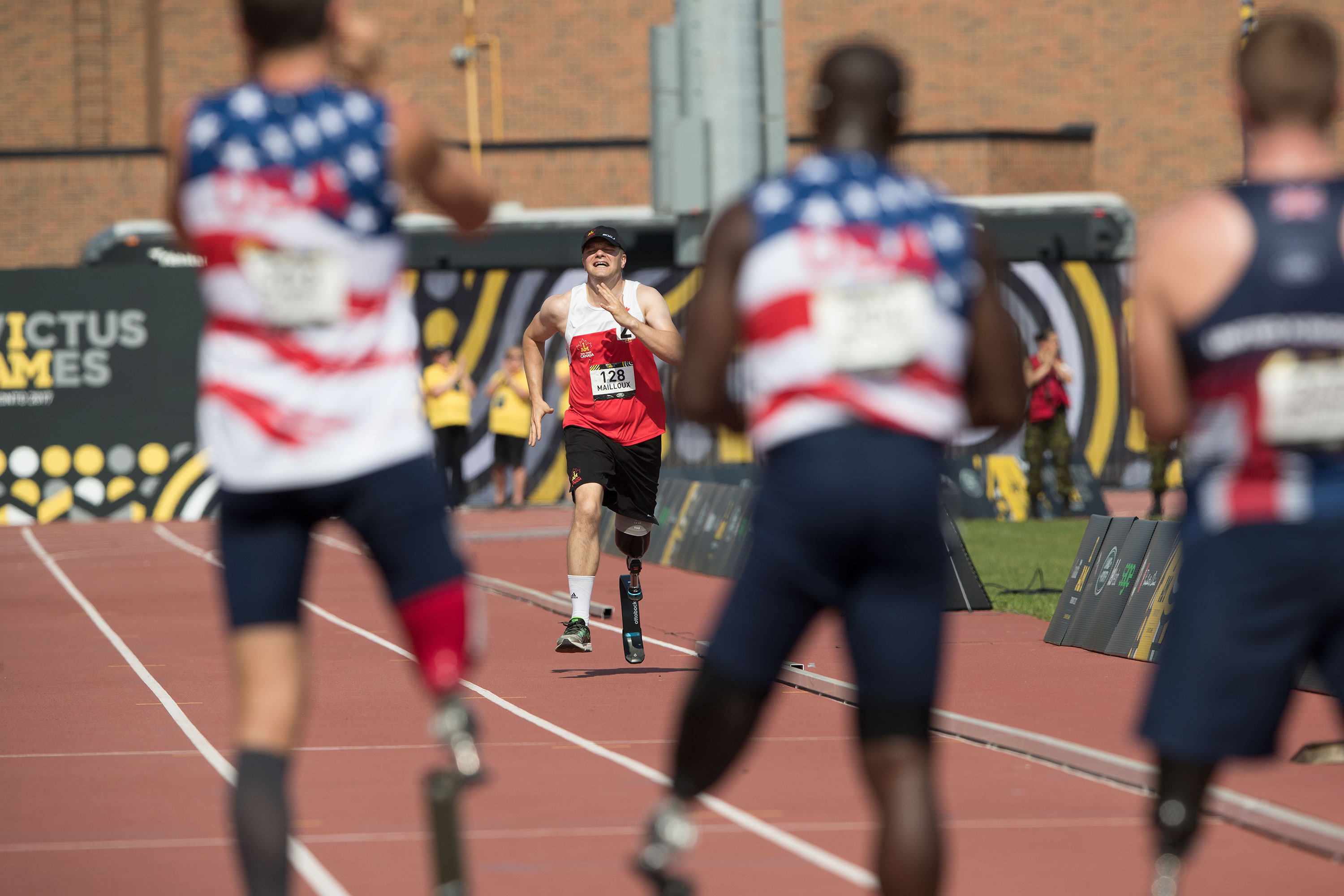 In true Invictus spirit, competitors wait at the finish line to encourage Canadian team co-captain Simon Mailloux as he runs the final stretch in the men’s IT2 1,500-metre race.
Stephen J. Thorne/Legion Magazine
“These factors, and knowledge that they had succeeded in training for and competing in the Games, led to a desire to take on new opportunities such as employment and education,” says the summary. 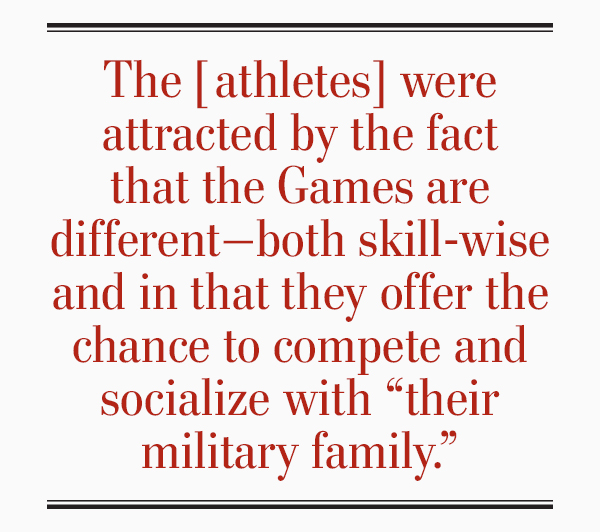 Participants from the earlier Games also felt Invictus provided a “platform and momentum, which they could use to be ambassadors and share their experiences and the message of the Games with the public.

“Thus, the majority of competitors described a complete transformation from their pre-Invictus struggles with isolation and depression.” 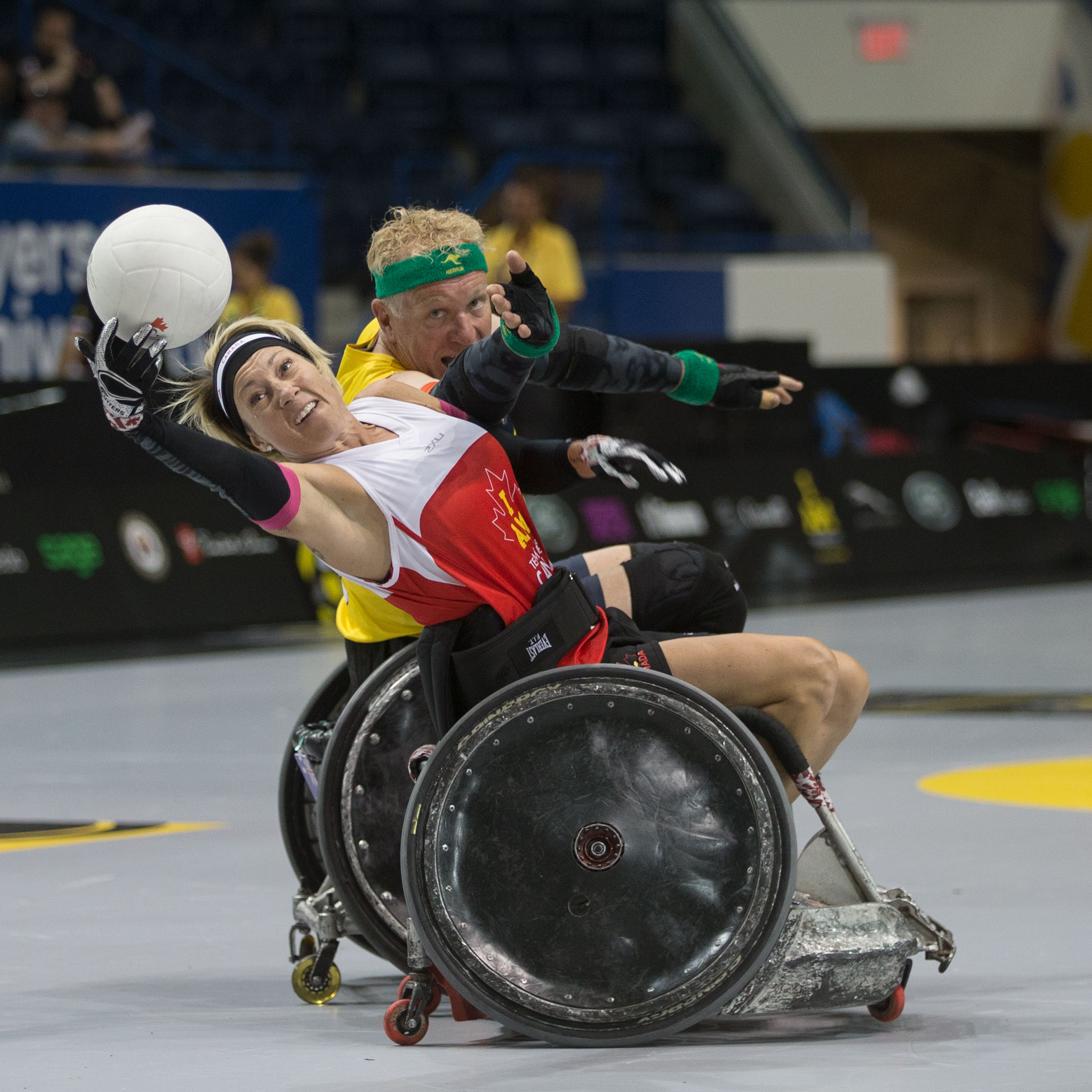 Hélène Le Scelleur competes in a wheelchair rugby match against Australia.
Stephen J. Thorne/Legion Magazine
In the first weeks after the Games, however, many of those who participated in London and Orlando said they went into a post-competition slump, especially the ones who had not been supported in developing post-Invictus goals.

The founder of the Invictus program, Prince Harry, addressed this issue in his speech at the closing ceremonies, where he encouraged participants to take on new Invictus challenges. 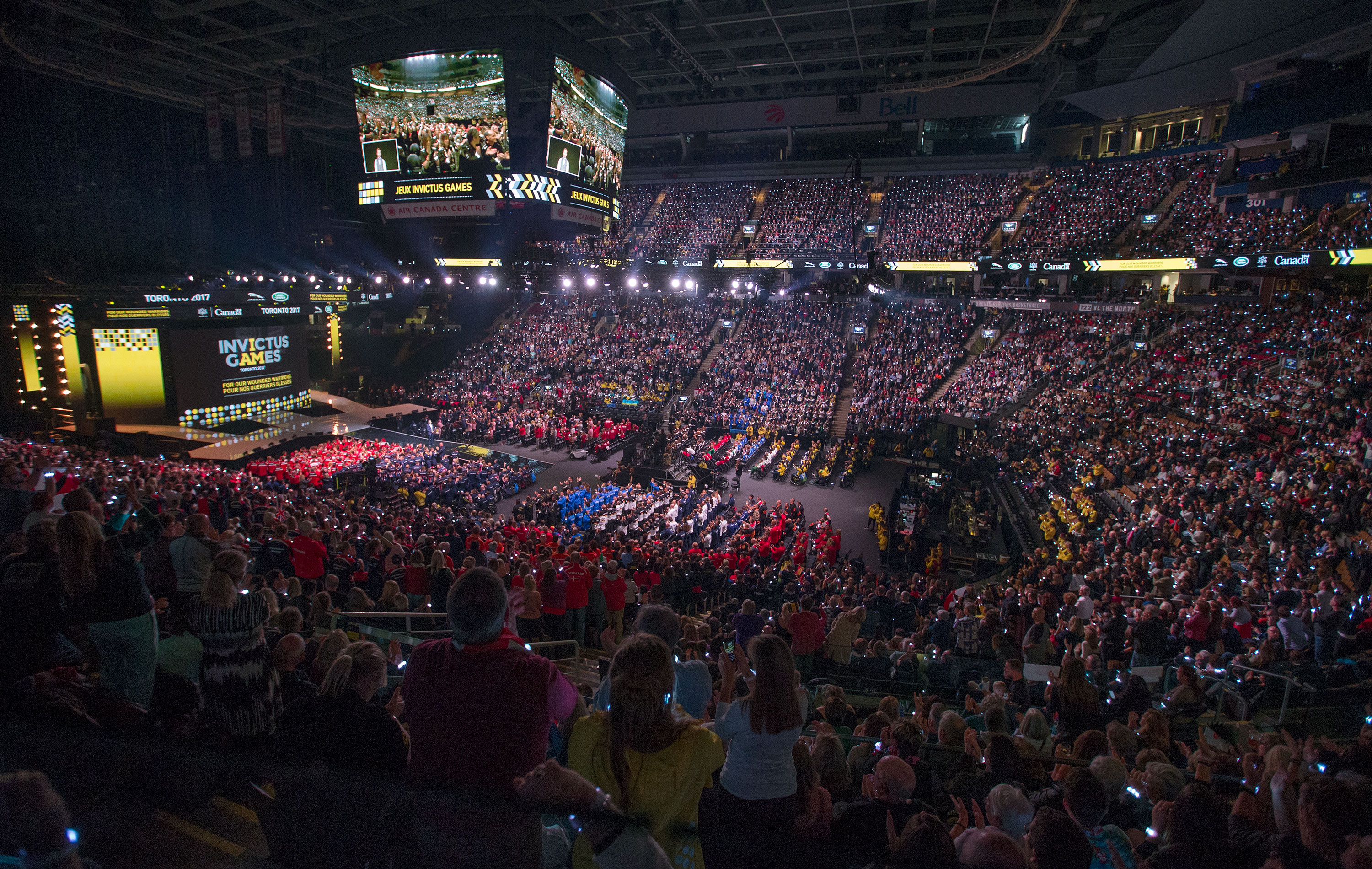 Closing ceremonies for the 2017 Invictus Games were held at Toronto’s Air Canada Centre.
Stephen J. Thorne/Legion Magazine
“Going home, it might be tough as the excitement fades,” he said. “But you have faced so many great challenges before, it’ll be a breeze.

“As I’ve said many times: Once you’ve served, you are always serving. And on your return home, I want you to set a new Invictus goal. Make a plan about how you’re going to use the experience of this week to help lift up all those around you.”

It may be something big, he said, like creating opportunities for young people or something small, like reconnecting with an old friend. “It doesn’t matter how big or small your step is, just take it.” 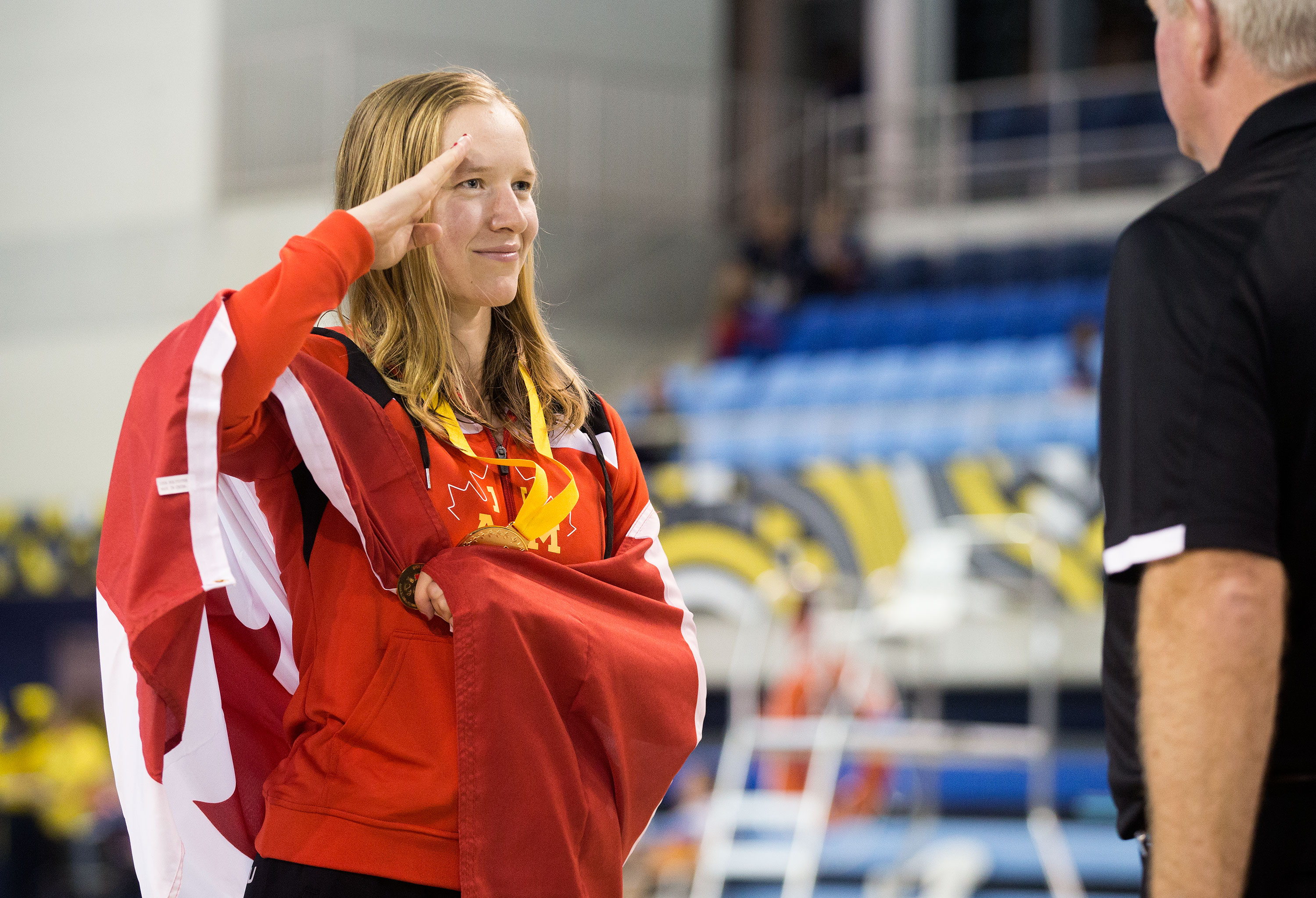 Corporal Kelly Scanlan salutes the former chief of the defence staff, retired general Rick Hillier, after he presented her with the gold medal in the women’s ISD 50-metre breaststroke.
Stephen J. Thorne/Legion Magazine
Without exception, Shirazipour wrote, all those she interviewed believed Invictus was “a pivotal and meaningful moment of their recovery journey.”

“The Games are one step on the Invictus journey,” she emphasized.

“Competitors may see more benefits when the focus is not specifically on the actual Games but on providing them with support and programming from training through to life after the Games,” she said.

“This further programming will aid competitors in harnessing the momentum from the Games, and maintaining benefits. Competitors will value the opportunity to maintain their connection to the Games, and thus their identity as a member of the Invictus family.”