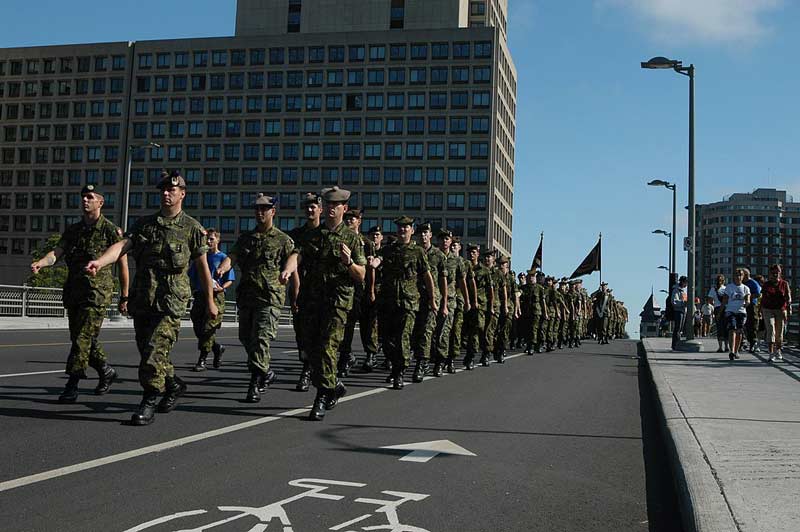 Members of The Cameron Highlanders of Ottawa, an infantry regiment of the Primary Reserve, march through Ottawa, Ontario
Wikipedia

We’re here to defend our way of life, now and into the future,” said the chief of the defence staff, General Wayne Eyre in mid-October 2022. “So we need a whole-of-society effort to help us bring the Armed Forces back to where it needs to be for the dangerous world ahead.”

No argument with that here. But, Eyre’s bosses in the federal government aren’t living up to numerous promises made years ago to ensure that the Canadian Armed Forces are Strong, Secure, Engaged as it titled its 2017 defence policy document.

To be clear, this isn’t a case for bolstering national defence. Nor is it a partisan attack. It’s meant to be a plain and simple accounting of pledges made and their delivery. There are problems. They didn’t just emerge.

Let’s start with peacekeeping, a role the country has long prided itself on as an international commitment that, theoretically, provided it with a cachet in global safety, security and diplomacy. Canada had just 59 personnel on UN missions according to its latest data.

Still, at a 2017 UN peacekeeping conference in Vancouver, Prime Minister Justin Trudeau promised Canada would “make a range of specialized capabilities available to the UN.” These included a 200-troop quick reaction force (QRF) and related equipment; an aviation task force of armed helicopters; and tactical airlift support to get troops and supplies to missions.

While it could be argued the country delivered on the latter two promises—it deployed one helicopter unit to Mali in 2018-19 and provided a single transport plane to UN missions in Africa—the QRF hadn’t materialized by its original March 2022 deadline. Cabinet subsequently extended that time frame to this coming March. Keep your eyes peeled.

Meanwhile, as noted in this space last issue, CAF members continue to face a significant housing shortage—early last fall, 4,500 service members and their families were on a forces’ housing agency waiting list. Five years ago, that federal body proposed the construction of 1,300 new units over a decade, along with alternative options such as leases and public-private partnerships to cover the remainder of the accommodation shortfall. Since then, 132 units have been built—10 per cent of the proposed goal.

Today, there are about 6,000 fewer regular CAF members than five years ago.

Then there’s the much-reported recruitment shortfall—now, realistically, a crisis. In 2017, the CAF committed to increase the size of the regular force by 3,500, to 71,500, and the reserves by 1,500, to 30,000. Today, there are about 6,000 fewer regular CAF members than five years ago, while the number of reservists has remained stagnant. Plus, the goal of having women represent 25 per cent of the forces by 2026 is woefully off pace. The latest data indicate it’s just 16 per cent.

Of course, add to these the perennial procurement problems (fighter jets, pistols and new special forces vehicles, for instance), delivery delays on new naval vessels and the decade-long postponement of the opening of the Nanisivik Naval Facility (originally slated for 2013, now scheduled for this year) as just some examples, and a clear pattern emerges.

Change may by on the horizon, however. The federal government’s 2022 budget announced a new defence policy review to update Strong, Secure, Engaged, noting that “recent events require the government to reassess Canada’s role, priorities, and needs in the face of a changing world.”