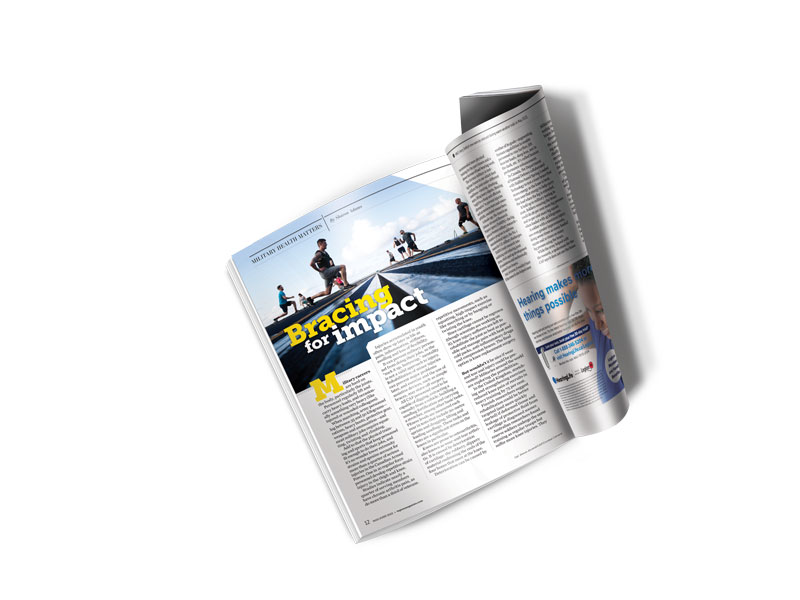 I just read the article “Bracing for impact” (Military Health Matters, May/June) and, as a currently suffering veteran with knee and back problems, I enjoyed it. Many of my fellow members who suffered from these issues during service were continually “shoved under the carpet,” so to speak. We were basically told our injuries were our own fault and not because of the continued toll our bodies took from everyday deployment.

Some of these members had surgeries, were mustered out to other trades or pushed out completely to live as best they could. At the time, it was just another way of shelving the problems by the powers that be, rather than really looking into the causes of repetitive workloads on our bodies.

My late father was one of the Canadians who stayed in Holland after the war (“We are grateful to them, but let them go home,” May/June). He returned home in April of 1946. He exchanged Christmas cards with the people he was billeted with until the day he died. He and my mother were fortunate enough to go over there for a visit in the 1980s. He never mentioned the overstaying their welcome part of his time there. A very interesting article.

Too often the public associates serving in the military as a combat fighting role, even though many Canadians have seen forces personnel assisting in natural disasters during the last few years.

If the Department of National Defence and the Canadian Armed Forces expanded and enhanced the capabilities and capacity of the Disaster Assistance Response Team (DART) and increased roles in urban search and rescue to include canine units, the recruitment and retention in the CAF would soar (“Crisis management,” May/June). It would also create a diverse capacity in all elements of the forces.

Canada needs be one of the first on the ground to a natural disaster or humanitarian crisis. This must include airborne/airmobile immediate response units that are ready to deploy at any moment to any place on the planet, including at home. This would give Canada a reputation as a world leader in disaster and humanitarian response, as well as in urban search and rescue. When Canadians are seeking a career after high school or university, they would be able to view the CAF as not only a military force, but a force for helping people.

We need to keep this conversation going until we are there.

Thank you for another excellent publication (May/June). It was well balanced and informative. The stories highlighting the dependence of Canadians on our military during peace and war was timely. In addition, the “Face to face” article and others provided readers with thoughtful reports and analyses.

Woes of a war hero

Private Jess Larochelle is quoted saying, “I have no regrets” at the end of the March/April article, “Danger Close.” I, and many other Canadians, would say that we have regrets regarding his suffering and the treatment he has received since returning from Afghanistan. This story shows what a first-class hero Larochelle was in the skirmish with the Taliban. It is easy to see how his actions saved himself and his colleagues from further casualties.

To have to take two civilian flights to get home after the wounds he suffered is unconscionable. He deserved much better treatment and support both in Afghanistan and in Canada. This is no way to treat our soldiers who do their jobs superbly.

If Canada does the buy of the F-35 (“Down to two,” March/April), that decision will be one of the greatest and costliest mistakes of our time. The U.S. air force found the F-25 too expensive to fly and maintain. There continues to be many serious issues with parts availability and quality. The stealth coating bubbles and peels off if the jet stays supersonic for any length of time, which can cause serious non-repairable structural issues. And it’s barely serviceable. Plus, it doesn’t respond well to cold weather. Canada is being sold an unaffordable pig. You can put lipstick on it, but it’s still a pig.