Cadets injured in a grenade accident at a 1974 cadet summer camp at Canadian Forces Base Valcartier, Que., were treated callously during the investigation and unfairly afterwards, says a scathing report by the military ombudsman.

Six cadets were killed when a cadet pulled the pin on a live grenade during a safety course; 62 cadets and three military members were injured (“Grenade accident remembered 40 years later,” November/December 2014). Many of the 137 cadets present subsequently developed mental health issues.

Although Canadian Armed Forces members received long-term care and benefits, injured cadets were not helped, aside from immediate medical care. No compensation was offered by the Department of National Defence or the Canadian Armed Forces, nor were parents informed of remedies and avenues of recourse.

Former cadets interviewed at a reunion in 2014 marking the 40th anniversary of the event reported they still suffer from shrapnel wounds. Some have post-traumatic stress disorder and some spent decades wondering why their lives spiraled down from a once-promising future to fear, failure and despair. Several committed suicide.

The “obvious lack of consideration for the youth under their care is inexcusable,” said the report by DND/CF Ombudsman Gary Walbourne, who recommended assessing cadets’ physical and mental health, funding a care program and providing compensation. 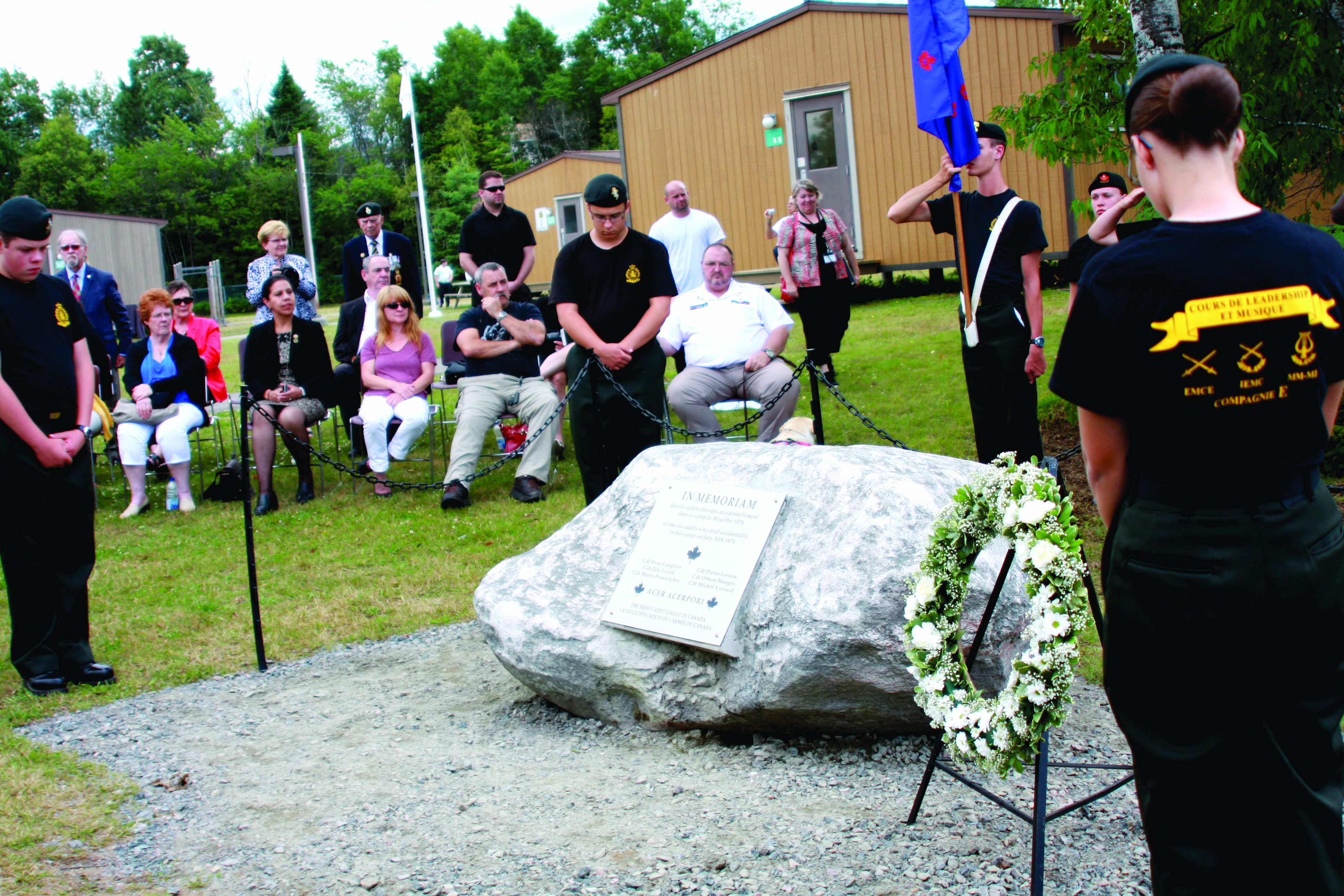 Wreaths are placed near a memorial rock where a plaque names the cadets who died in the 1974 explosion.
Sharon Adams

“On behalf of the Government of Canada, I regret the effect this event has had on the victims and their families,” said Defence Minister Jason Kenney. “I regret that it took 41 years to formally recognize and fully address this tragedy.” He said the government will act on the report’s recommendations. Information is available at 1-844-800-8566 or [email protected]

But survivors say the tragedy has not been fully addressed. “The most important thing is that the boys are taken care of,” said former cadet instructor Gerry Fostaty. The cadets, now in their 50s, await an apology. “The word ‘regret’ is not an apology.”

“The best apology would be through just and swift actions…to end our 41-year struggle,” said survivor Paul Wheeler. “We are now part of another lengthy process.” The report recommends financial compensation in line with jurisprudence in similar situations. “Can someone please tell me about these other ‘similar situations?’ I don’t know of any. This process for medical and financial redress should not be allowed to fall into the normal frustrating bureaucratic abyss which is often the case with military claims.”

The incident resulted in changes to the cadet program, said Vice-Chief of the Defence Staff, Lieutenant-General Guy Thibault. “We take the responsibility to protect the young people in our care very seriously.”

After the explosion in 1974, the CAF held a Military Board of Inquiry at which boys were treated as adult members of the military, escorted into a bunker by armed guards and grilled about which cadet might have brought a live grenade into the classroom. They were instructed not to divulge or discuss their testimony.

Police determined the live olive-green grenade had been mixed with blue inert grenades in a box brought to class by the instructor or his assistant. The military police and Board of Inquiry reports were classified confidential. The instructor was found not guilty of criminal negligence in Quebec court in 1977. After the trial, cadets and their families were left to their own devices.

The ombudsman launched an investigation after receiving 52 complaints in 2013. Many were sparked by social media reports that CAF members not present during the explosion had received compensation and benefits. Complainants wanted treatment, compensation—and an apology.

The ombudsman delved into the 1974 reports. The Board of Inquiry had concluded “the incident was the result of minor negligence,” and apportioned blame among the instructor, his assistant and civilian employees. Army staff recommended that after the insurance process, the Department of Veterans Affairs should determine if compensation was adequate and petition the government if it was not.  The ombudsman found no documents to confirm, nor person who remembers, whether the CAF, the Army Cadet League and Veterans Affairs followed up on these recommendations.

DND  paid cadets’ funeral expenses, but chose “to compensate only those who made claims against the Crown,” said the report. The 14 known suits resulted in a median settlement of $11,601 ($58,143 in today’s dollars). By contrast, five of the six CAF members who applied for compensation under the New Veterans Charter after 2007 received settlements of $85,000 or more, plus ongoing medical benefits. Compensating CAF members, but not the boys under their care, “goes against the principle of fairness,” said the report.

Cadets are not members of the CAF or civilian DND employees, thus not eligible for care and benefits provided to military members or veterans.

“To this day,” said the report “claims against the Crown…remain the only mechanism by which cadets can seek benefits in similar situations.” The ombudsman intends to conduct an independent review of the cadet program, which serves more than 50,000 army, sea and air cadets.