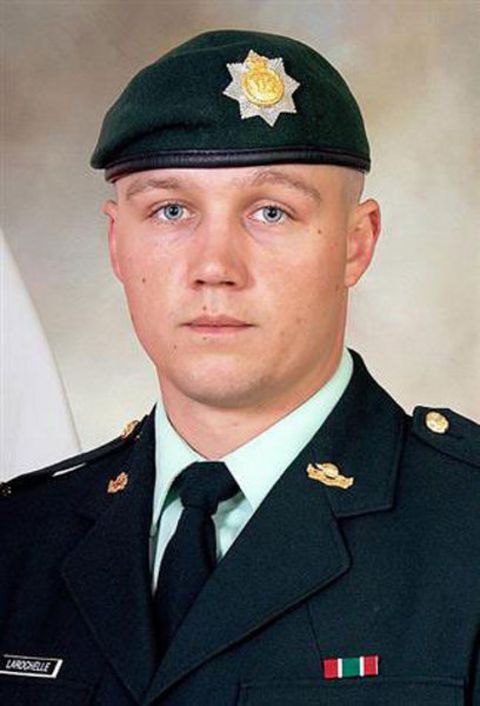 Private Jess Randall Larochelle of the Royal Canadian Regiment was in an observation post when it was destroyed by a rocket-propelled grenade during an enemy attack on the position in Pashmul, Afghanistan. It was Oct. 14, 2006.

Manning a C6 machine gun—known as “the bullet magnet” because the enemy always looks to disable it first—Larochelle was knocked unconscious by the blast. Two members of his section were killed and three others wounded.

Some time later, Larochelle came to and quickly realized his unit’s position was about to be overrun. He didn’t know it yet, but his back was broken. Bloodied and battered, his ears ringing from the concussive blast, his years of training took over.

Larochelle crawled back to the machine gun to defend his position, only to find the weapon had been destroyed.

Larochelle’s actions saved the lives of the remainder of his section.

“Beside him are 15 unused M72 rocket launchers,” wrote his comrade in arms, retired corporal Bruce Moncur. “Think about how fortunate he was that none of them detonated, and how dangerous it could have been to fire them if they had been bent or damaged.”

Oblivious to the risk, the Callander, Ont., native started pulling off the rubber stoppers on the 15 single-shot rocket launchers, extending the disposable tubes and taking aim.

The weapon was devastatingly effective. Taliban fighters were blown to pieces with each shot, their body parts flying in all directions. Other enemy fighters were unnerved by the sights and sounds around them and they began a scattered retreat.

Larochelle’s actions saved the lives of the remainder of his section. He was awarded the Star of Military Valour.

“Although he was alone, severely injured, and under sustained enemy fire in his exposed position at the ruined observation post, he aggressively provided covering fire over the otherwise undefended flank of his company’s position,” said his citation. “Private Larochelle’s heroic actions permitted the remainder of the company to defend their battle positions and to successfully fend off the sustained attack of more than 20 insurgents.

“His valiant conduct saved the lives of many members of his company.” 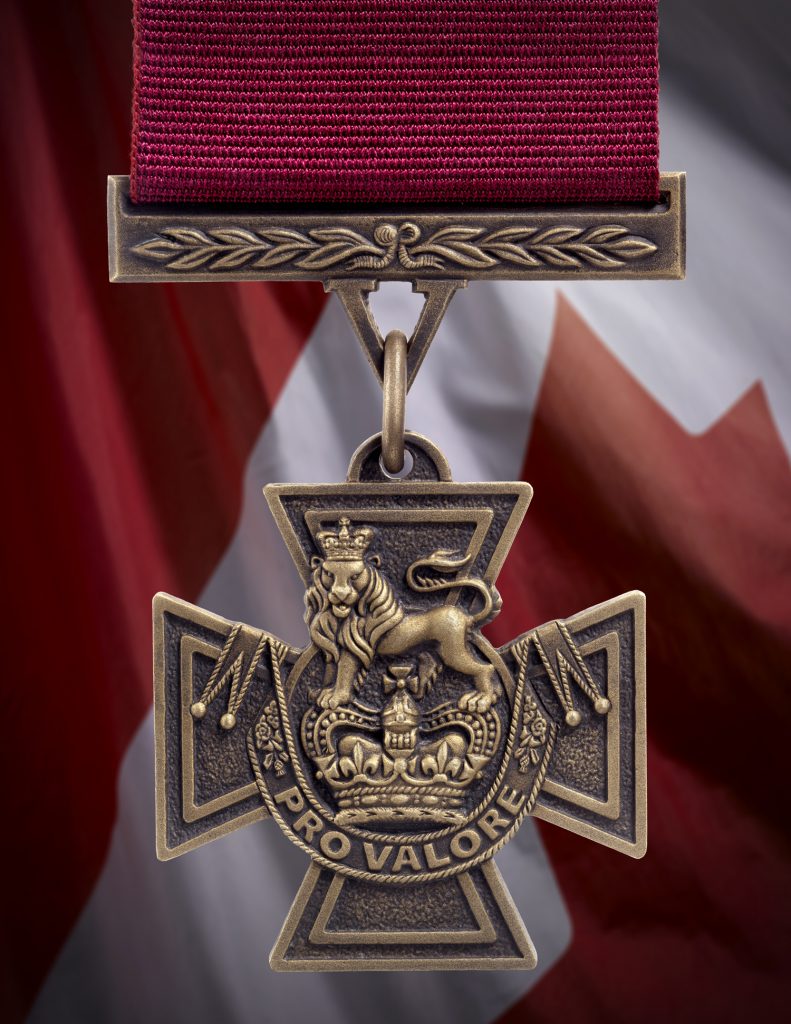 The Canadian Victoria Cross medal
David Ash/Natural Resources Canada
Ninety-eight Canadians are among the 1,358 British Empire and Commonwealth soldiers, sailors and aircrew to have earned the original Victoria Cross.

The last Canadian recipient was Lieutenant Robert Hampton Gray, whose posthumous award came for actions on Aug. 9, 1945, when, under heavy fire, he led a Corsair attack on a Japanese destroyer and sank it with a direct hit even as his aircraft burned.

Canada has not seen fit to recognize any of its soldiers with the new award.

In February 1993, Canada followed Australia’s precedent and established its own VC, its distinctive cross impressed with the Latin motto “Pro Valore” instead of “For Valour,” thus avoiding the need to squeeze Canada’s two official languages onto the scroll that bears it. New Zealand followed suit with its own medal in 1999.

But while Australia has awarded four of its own VCs and New Zealand one, Canada has not seen fit to recognize any of its soldiers with the new award.

Two critical criteria for the awarding of a VC are lacking in all of the 109 total actions honoured with intermediate gallantry awards in Afghanistan, including the 20 Stars of Military Valour (SMVs), Lieutenant-Colonel Carl Gauthier, the military’s director of honours and recognition, told Legion Magazine in a 2018 interview.

“One is when somebody voluntarily or knowingly draws the enemy’s fire upon them in order to relieve the pressure on somebody else,” Gauthier explained. “Or somebody just gets up and charges the enemy against overwhelming odds.

The Department of National Defence even initiated a review of all 20 SMV actions after some veterans suggested the award had become more generous as Canada’s participation in the Afghanistan war was ending in 2014.

Now a group of Afghanistan veterans spearheaded by Moncur and supported by retired general Rick Hillier are challenging that assertion.

Calling themselves Valour in the Presence of the Enemy, they have compiled lists of potential VC recipients, both modern-day and historical, which they intend to detail in a pair of documentaries they hope to air in a future remembrance period. Backed by new evidence, Larochelle stands at the top of that list.

His citation did not mention the fact his unit was already undermanned before the attack. Moncur said a section was at a nearby forward operating base getting checked after two were killed in an ambush that morning, including the section commander, Sergeant Darcy Tedford. Four others were wounded.

Furthermore, cannons aboard the two light-armoured vehicles facing the enemy went down during the battle, leaving Larochelle and his cache of M72s their only defence until the cannons could be cleared. 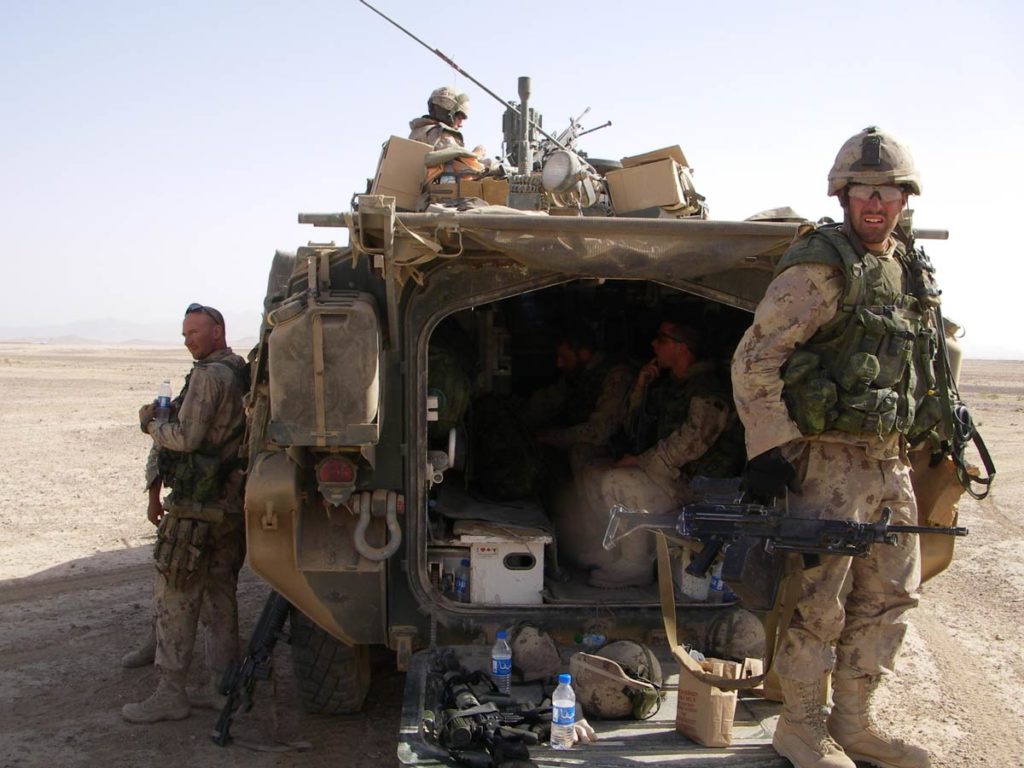 Corporal Bruce Moncur (right) carries a C9 machine gun in Afghanistan in 2006.
Bruce Moncur
Later the following day, Larochelle—his back injury still undiagnosed—was among eight soldiers to carry a friend’s casket during a ramp ceremony. Only afterwards did the private come forward to seek medical attention. The doctors discovered he had a fractured vertebra.

His injuries were so severe he was released from the military, receiving the Star of Valour and his release papers the same day. He has struggled mightily since, says his brother, Andrew.

“He has almost died a number of times due to physical medical complications because of that day, so many that I have lost count,” he wrote in a December 2020 Facebook post supporting the call to award his brother the VC.

“It would be great to see this awarded to him before he succumbs to his injuries.”

The award process is long and complex. Any witness can nominate a VC candidate, but it has to be signed off by the nominee’s unit commander and is subject to multiple reviews and revisions before it reaches the honours and recognition panel for a decision. Thus, Gauthier didn’t know at the time of his interview if any new VCs were ever nominated.

Among his committee’s criteria are numerical limits on the number of gallantry awards that can be given—one nomination for every 250 people under command for each six-month period of war; mentions in dispatches are at one in 100.

The rate of Victoria Crosses awarded in the First World War stood at about one per 7,400 combatants. Translating that to the 40,000 Canadians who rotated through Afghanistan, five VCs could technically have been awarded and still been historically consistent, though the introduction of intermediate awards for gallantry over the years has changed the landscape considerably.

No less than 24 VCs were awarded in just one day at the Relief of Lucknow during the Indian Rebellion, also known as the Indian Mutiny, of 1857.

Eleven were handed out after the two-day Battle of Rorke’s Drift during the 1879 Anglo-Zulu War, when 137 British troops held off thousands of Zulu warriors.

There were 628 VCs awarded during the First World War (Canadians got six at the Battle of Hill 70), only 182 during the Second, and just 16 since.

Racism, classism and politics—even British reluctance to recognize their colonials—have all figured in past nomination processes and, as with any judgment-driven awards, there have been many cases where VCs were awarded or denied for reasons unsupported by the evidence.

Moncur believes Larochelle was denied the supreme award simply because the action occurred too early in the war. The mucky-mucks back in Ottawa had no way of knowing then if someone else would set a new standard later on. No one did.

“By the time the war moved on, the story became ‘how do you give somebody the VC over what those guys at the beginning did?’ They set the standard so high, it became almost impossible to get the VC.

It adds to the conversation that we are the forgotten war.

“They second-guessed themselves and basically said ‘no, we’re just going to stick to the Star.’ I think it cost us the Victoria Cross and, I’m telling you right now, there are 40,000 pissed off [soldiers] that the VC didn’t get put out.”

Like the Korean War, in which no Canadian received a VC, Moncur says the lack of recognition has only contributed to the feeling among a significant number of Afghanistan veterans that their service somehow didn’t measure up.

“It adds to the conversation that we are the forgotten war, that we don’t get the respect that the other wars get. It does cause a bit of animosity, especially when you have Afghanistan veterans who feel like they’ve fallen between the cracks.”

In these pandemic times, when morale across the country tends to be at a low ebb, Moncur says a VC would inspire soldiers and their compatriots, giving Canadians someone or something to look up to, rally around, and be motivated by.

“How many people know Jess Larochelle? I’ve got soldiers, even, who don’t know these stories. We, as Canadians, fail to brag about some of these people and what they’ve done. It’s in our nature.”