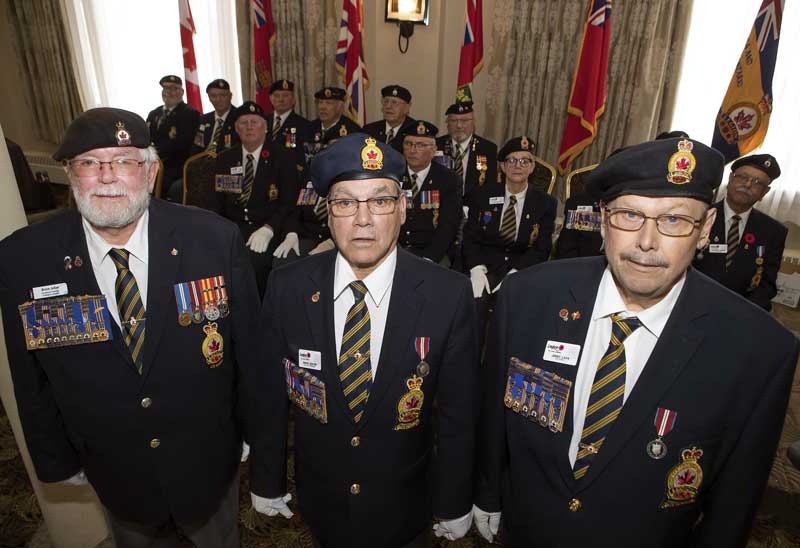 Now, newly acclaimed command President Ernie Tester of Gladstone, Man., Branch—a 47-year member—is looking to make friends and recruit members, all while keeping the Legion focused on the people who matter most, veterans.

“We’ve got to support the young veterans; we’ve got to keep them involved,” Tester declared in an interview with Legion Magazine at the command’s 50th convention in Thunder Bay, Ont., in June.

“It means so much,” he said. “We’ve got to look after them. You know, the veterans gave us [young, non-veterans] a chance 45 years ago to get involved in this Legion and we’re very fortunate they [did].

“Membership at that time was starting to decline and they opened it up to associate members and affiliate voting and non-voting members.”

Tester inherits an impressively healthy organization from his predecessor, Jerry Lava of Kenora, Ont., Branch. Last year’s convention was postponed due to COVID-19, and branches had been ordered closed or restricted to limited activities for most of the preceding two-and-a-half years.

Ukrainian Canadian Veterans Branch in Winnipeg closed its doors, but did not surrender its charter and was temporarily operating out of other branches.

Tester, now semi-retired from the hotel and grocery businesses, was mentored by Second World War army veteran and former command president Joe Fraser, who died in 2016 at age 89. “It seems like I went to about 20 conventions with him,” said Tester. 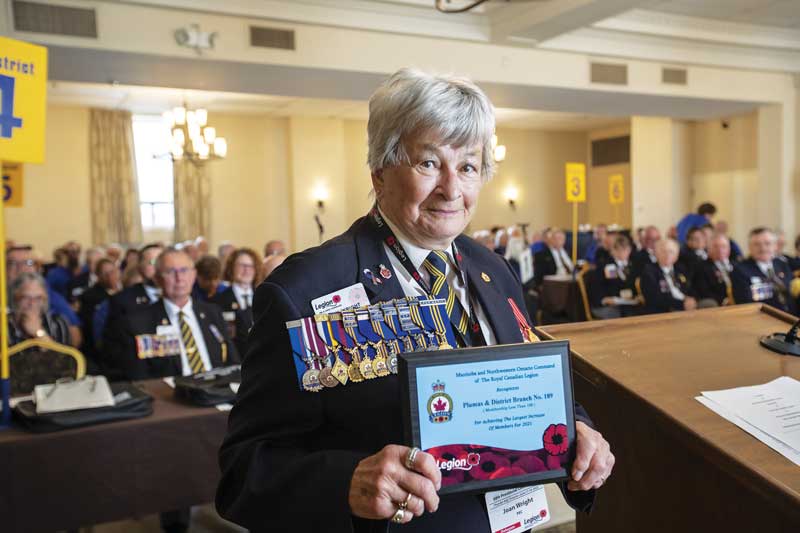 Joan Wright accepts the provincial award for best recruitment by a branch with membership of less than 100 on behalf of Plumas, Man., Branch.
Stephen J. Thorne/LM

“We have to work together. And respect one another,” he said. “Respect is so important.”

Indeed, respect was the order of the day at the convention, where nary an angry word was uttered during two days of meetings involving 150 proxies and 92 on-site delegates, including some 20 veterans.

The sessions were held in the same Prince Arthur Waterfront Hotel & Suites conference room where the Great War Veterans’ Association, precursor to the Canadian Legion (later designated “Royal”), ratified adoption of the poppy as the national symbol of remembrance in 1921.

Delegates to the 2022 convention raised more than $15,000 for the Royal Commonwealth Ex-Services League, which administers veterans’ programs in Africa and the Caribbean.

Peter Martin of Transcona Branch in Winnipeg delivered a moving report about his 2019 pilgrimage to France and Belgium, incorporating his own family history in a poignant account of his travels to the battlefields and cemeteries of both world wars.

And outgoing president Jerry Lava described how “everything
changed” as Legions across the country entered the “uncharted waters” of the pandemic. “Zoom” became part of the lexicon as national, regional and local officials began an uncertain journey.

“None of us anticipated what was about to transpire,” said Lava, acknowledging key financial assistance from national headquarters and the federal government.

“Branches did an excellent job trying to think outside the box. There were many creative approaches,” he added, describing how Charleswood Branch sold poppies during peak social distancing in Winnipeg by setting up a drive-thru and pinning the commemorative flowers and collection baskets on the ends of curling brushes. 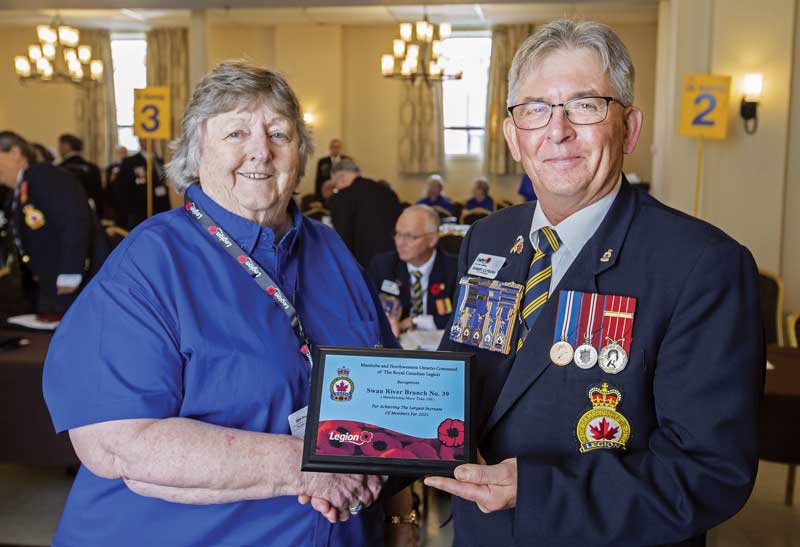 Many branches used YouTube or Facebook to stream remembrance ceremonies, demonstrating what Lava described as “the resilience
of you, as members, to come up with so many ideas throughout this pandemic to continue on with the support that we provide to the community and what we represent.”

Dominion President Bruce Julien thanked those who put so much effort into maintaining Legion branches and veterans’ support programs through such challenging times.

He came with good news, too: Legion membership is growing
for the first time in more than 30 years—a “phenomenal” eight per cent, year-over-year. “It looks like we may have turned the corner,” said Julien, “and all the processes we put in are starting to pay off.”

Now, he added, the challenge is to keep the new members.

“Like it or not—agree with it or not—the decision to not remain a member directly relates to the experience and reception that new members receive within their local branches. We’ve got to do better at keeping these members when they sign up. We’ve got to make new members feel welcome, and we’ve got to keep them.

“It is they who are our future.”

An award-winning journalist, editor and photographer. He has reported on the downfall of South African apartheid and from war fronts in Kosovo and Afghanistan.
All Posts
PrevPrevious ArticlePlans for helping homeless veterans and changes to track and field highlight
Next ArticleDelegates elect first female presidentNext