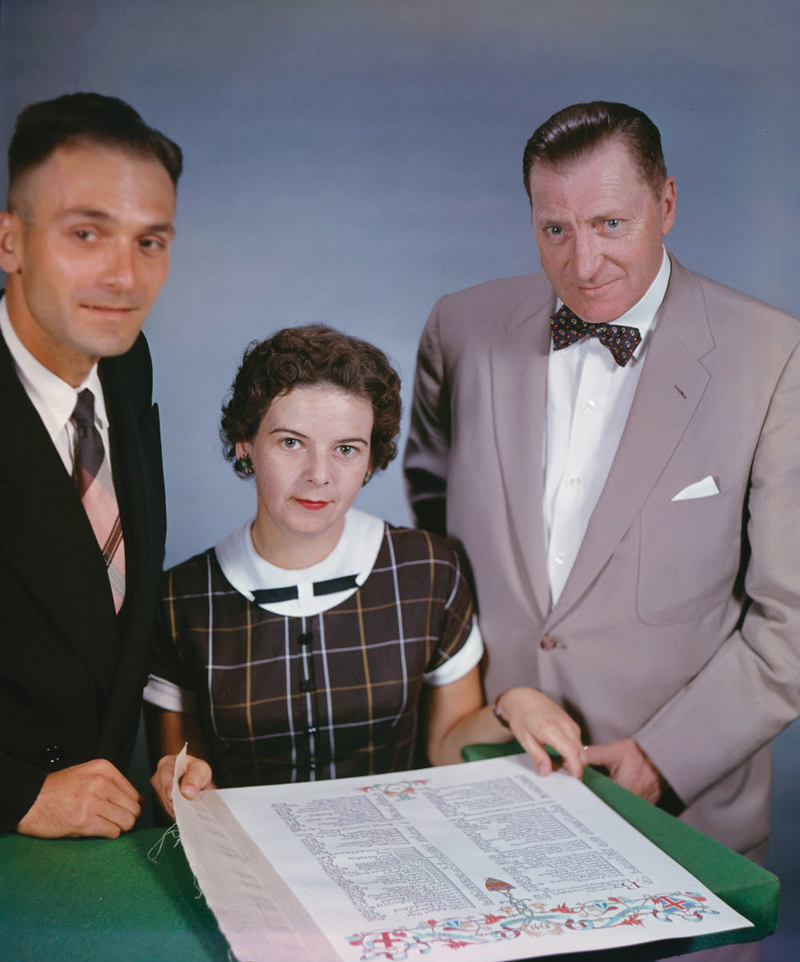 Numerous artists, including Alan Beddoe worked on the tomes.
DND/LAC/4234243

During restoration of the Centre Block on Parliament Hill, the Books of Remembrance have been moved from the Peace Tower’s Memorial Chamber to a temporary space under the starry ceiling in the Room of Remembrance in Parliament’s Visitor Welcome Centre.

The eight tomes are national treasures containing the names of more than 120,000 Canadians who died in service of the country. A page of each book is turned every day in a ceremony at 11 a.m. so that every name sees the light of day at least once a year.

Artist James Purves was hired in 1931 to produce it. The work was expected to take five years, but it wasn’t finished when he died in 1940. His assistant Alan Beddoe completed the work in 1942, assisted by six artists and illustrators. That first book is perhaps the jewel of the collection. The dedication pages, in English and French, resemble illuminated manuscripts of medieval times. 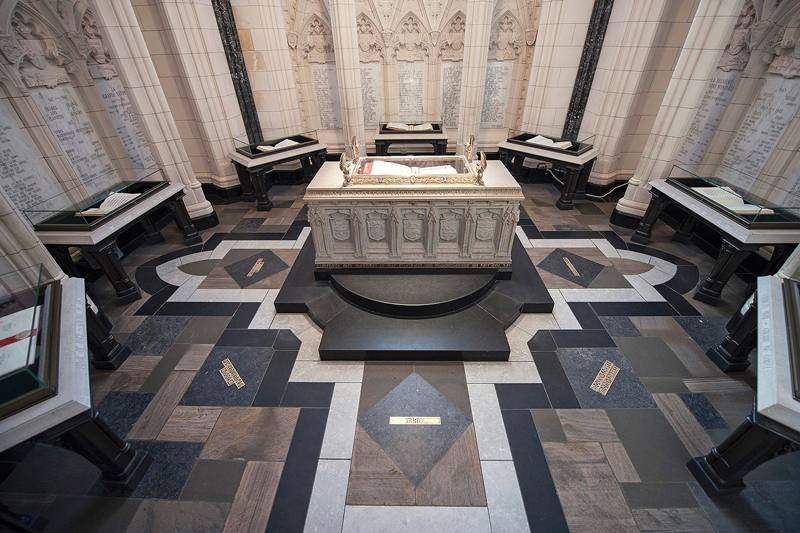 The Books of Remembrance have historically been housed in the Memorial Chamber on Parliament Hill.
VAC

In total, 66,655 names were inscribed, alphabetically by year of death, by calligrapher William Baldwin. Richly coloured illustrations in heraldic style decorate the page tops, bottoms and margins. A bookmark inlaid with gold and silver sat between the book’s open pages. The volume had more than 600 calf-skin vellum pages, weighed nearly 31 kilos and was almost 25 centimetres thick. It was rebound in two volumes in 1959 when the original binding was replaced.

“By recalling the dead by name it will enhance the atmosphere of solemnity and induce an attitude of reverence in all beholders.”

Although the Great War was touted as the war to end all wars, such was not the case. In all, 44,893 Canadians are commemorated in the Second World War Book of Remembrance. It was unveiled on Remembrance Day in 1957.

The 516 names in the Korean War Book of Remembrance are recorded on gold-edged vellum pages and are accompanied by a dedication page and another illustrating the shields of the 17 countries of the United Nations forces.

The South African War/Nile Expedition Book of Remembrance contains 267 names of those who perished in what is known as the 1899-1902 Boer War, as well as a special section dedicated to the 16 killed during the 1884-1885 Nile Expedition, the first overseas conflict Canada participated in.

The 211-page Newfoundland Book of Remembrance contains the names of the dominion’s 2,363 war dead from 1914 to 1949, before the province joined Confederation. It was placed in the Memorial Chamber in 1973 and a replica is displayed in the Confederation Building in St. John’s, N.L.

Dedicated in 1993,
the Merchant Navy Book of Remembrance memorializes 2,212 mariners lost during the First and Second world wars.

A total of 1,653 soldiers, sailors and Indigenous allies killed in Canada when the country was a colony of Great Britain are commemorated in the War of 1812 Book of Remembrance. It was unveiled in 2019 on the 200th anniversary of the treaty that ended the conflict.

And the first volume of the In the Service of Canada Book of Remembrance memorializes 1,912 Canadian Armed Forces members who have died since 1947, excluding those recognized in the Korea book. Dedicated in 2005, it contains the names of the dead from the war in Afghanistan, as well as peacekeeping and NATO missions. A second volume now includes the names of 81 killed in action since 2015. 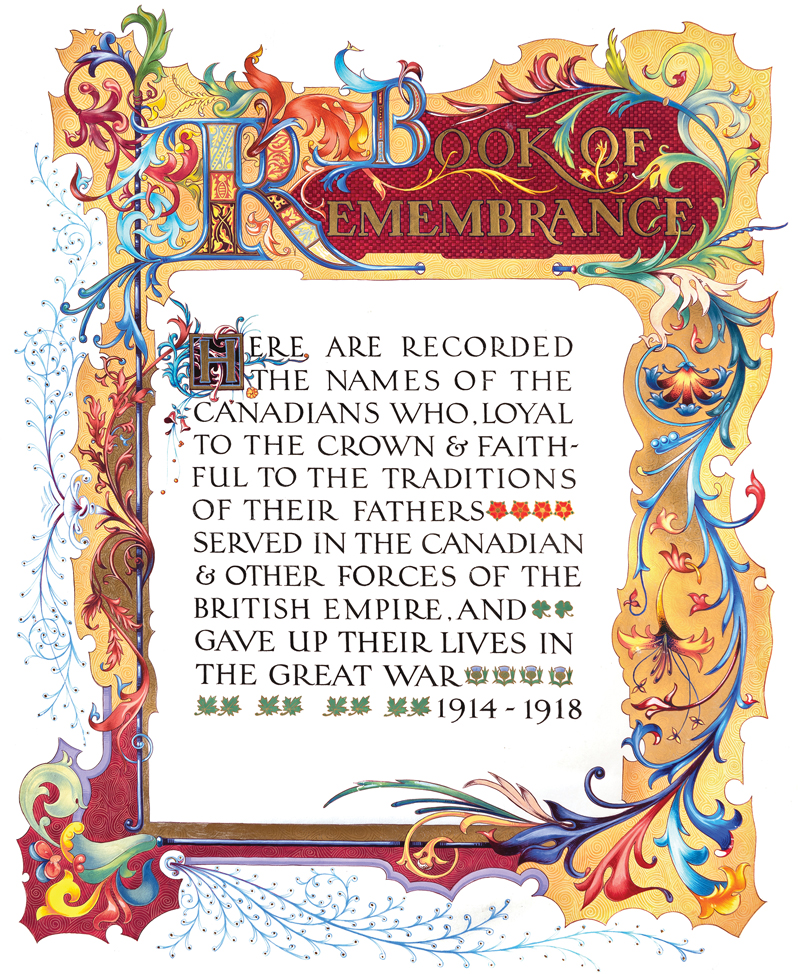 11 Number of years it took to complete the first book. 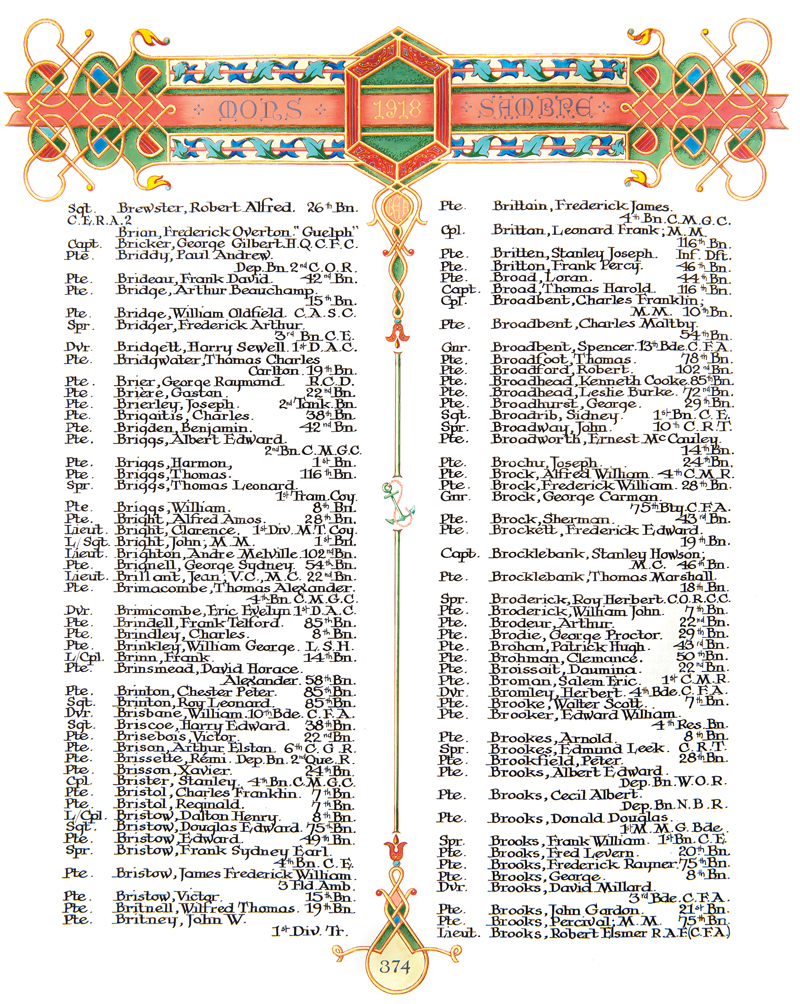