Even at the best of times, Christmas can be a confusing, bittersweet morass of nostalgia, loneliness and longing. Nowhere is this more evident than a Christmas at war.

Whether it be soldiers at the front living in filth, airmen flying flak-filled missions over Germany, or sailors running the U-boat gauntlet in the North Atlantic, a Second World War Christmas was a time of camaraderie, care packages and stinging reminders of all they were missing—and all they had missed.

For some folks back home, the season could remain a lifelong reminder of a lost loved one. 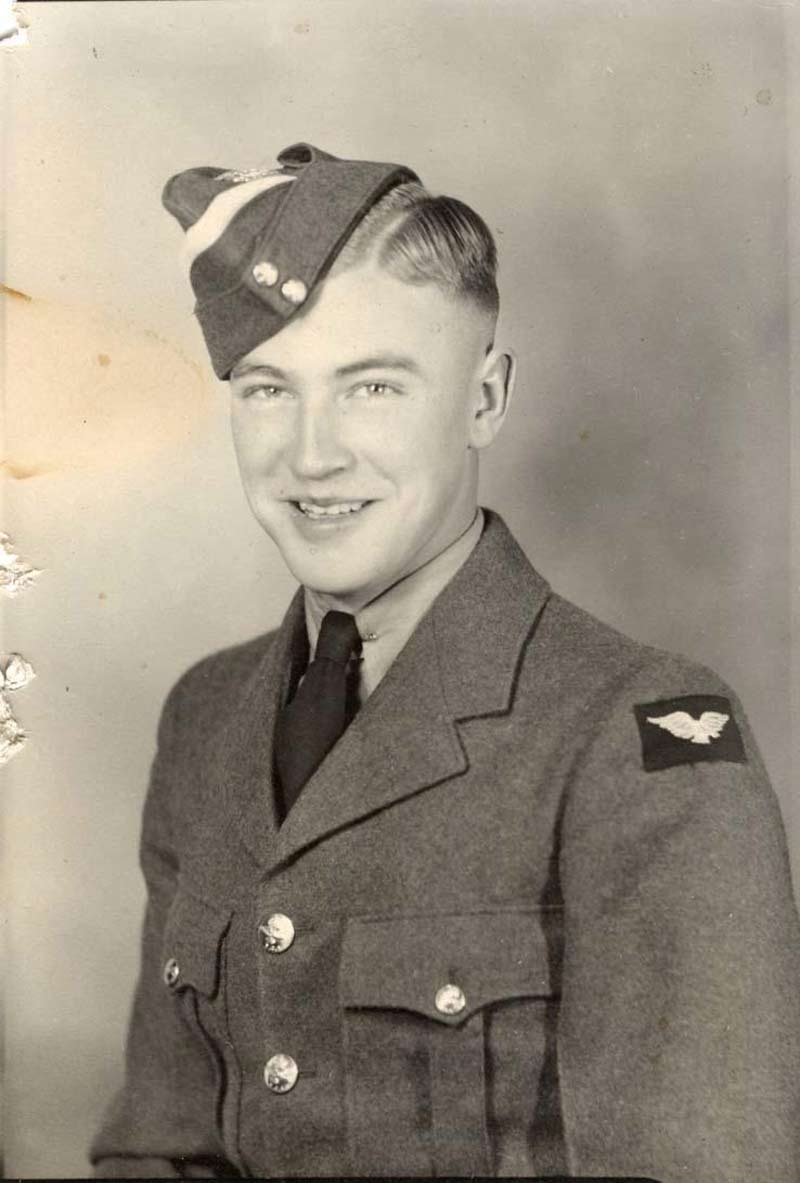 He wrote three letters through December 1944. The parcels had already started arriving by Dec. 5.

“Now that the cold weather, and I do mean cold, is here, those eats are going to go down pretty good in the huts at night,” he wrote.

“As you know I only fly with strange crews whose bomb aimer is sick or gets a piece of flak up his kilt,” he said. “So far I have been lucky enough to get in two trips and believe I’ll get a tour (30 missions) finished with yet.

“We did jobs on Hagen and Karlsrube and the latter was really a good prang-bags of fires and all that, a marvelous sight, only from 18000 (feet) [5,500 metres].”

He had received more parcels by Dec. 18, including his mother’s chicken. Though he hadn’t unpacked it yet, he noted the bird “looks well.” 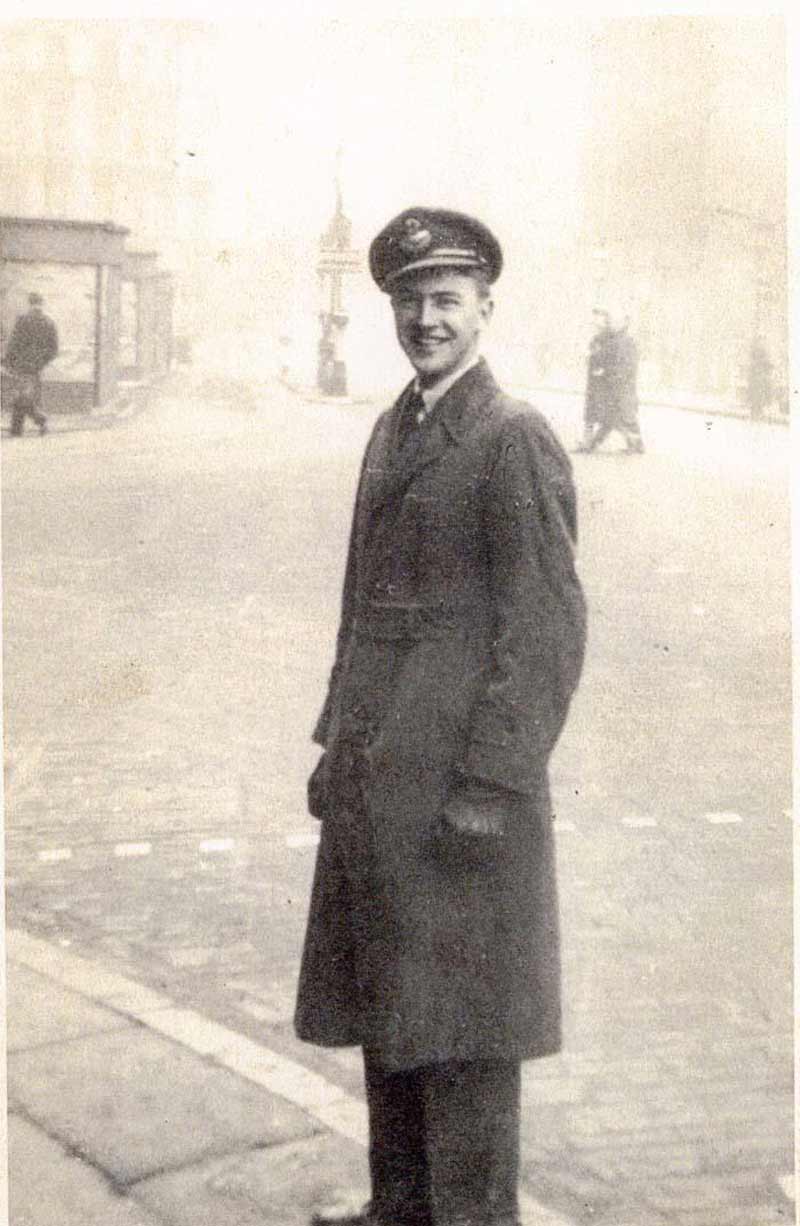 The Canadian Letters and images Project
“The station is throwing a party for the city of York orphans and we are all giving bars, candy, etc. towards it,” he said. “I can see where there will be a lot of sick children as they have a terrific supply right now.”

“Everybody is hugging the fireplace these days. I’ll certainly be glad to have Sask weather again even if it is 60 below.”

Returning from a mission on Dec. 23, he and his crew were forced to land in the south of England, spending four days far from their base, “so our Xmas was kind of spoiled,” he wrote on New Year’s Eve. “We went to a couple of dances—flying boots and all, and didn’t have too bad a time considering.”

He had received cartons of precious cigarettes from his parents, grandparents and others.

“We’ve been having the pants flown off us while weather permitted,” he wrote. “I’ve got 13 [missions] in now and about 17 more to go, so with any luck at all, another three months should see me through.”

George Creswell was killed on a raid over Germany less than two months later, on Feb. 21, 1945. Buried at Durnbach War Cemetery in Germany, he was 20 years old. 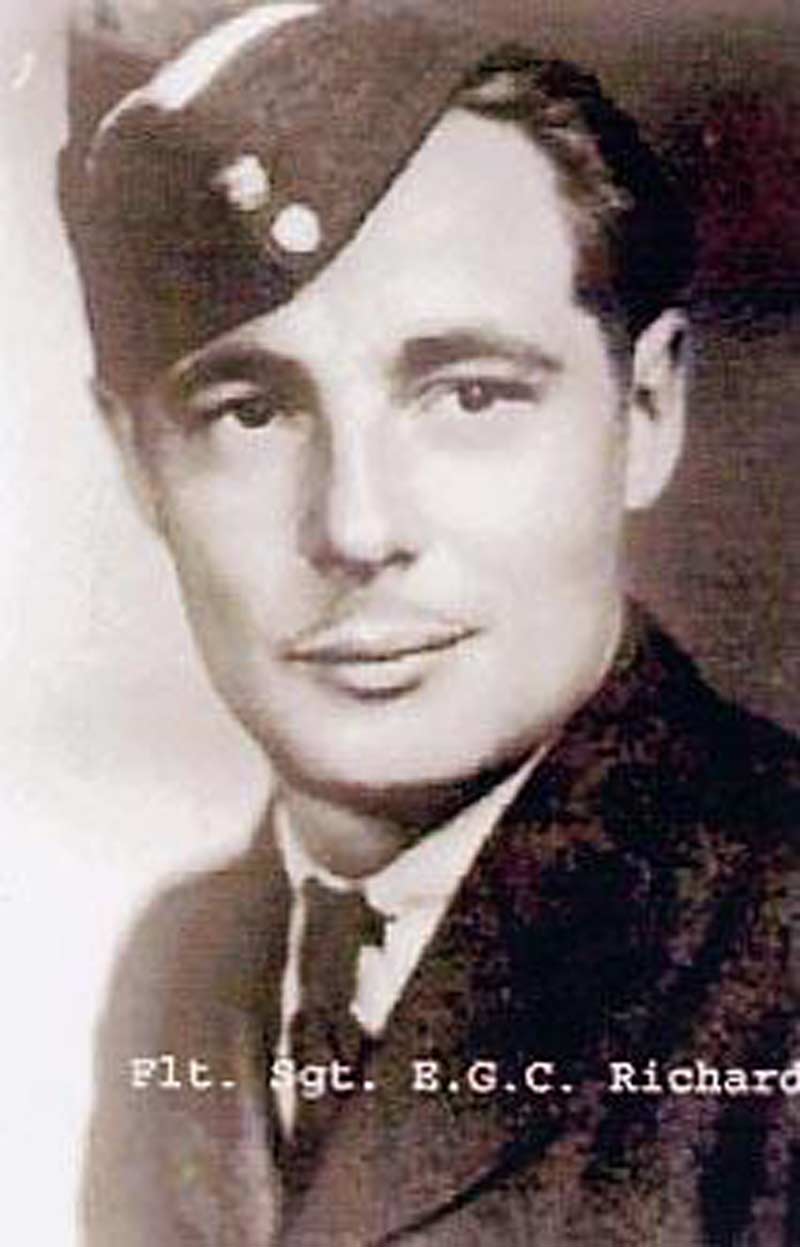 The Canadian Letters and images Project
Flight Sergeant Edward (Ted) Richards of Whitehorse was a gunner with 49 Squadron, Royal Air Force. He wrote his last Christmas letter home on Dec. 21, 1944, a four-paragraph note apologizing to his parents for rushing.

“The parcel arrived—I believe I mentioned it in my last letter,” he said. “I sure was glad to get it. On Christmas day we are going to have a big party in the mess, for a lot of little orphans who live near the station.”

The bombing campaign was in full swing—Americans during the day; RAF and Commonwealth forces at night.

“I should be finished in about five more months,” he wrote. “That’s a long time, isn’t it, but it will soon be over, and I’ll be walking in on you one of these days.

“The weather is foggy and wet. I’ve been cold ever since I came over. It would be lovely to see a little Vancouver fog for a change. I’ve seen plenty of countries from the air since I started. I’d like to see them all in peace time, but it would cost a fortune. I must close, but I’ll write more next time.”

Richards’ Lancaster was shot down on March 15, 1945, over Berlin. He left behind a wife and an infant daughter he had apparently never met.

The Canadian Letters and images Project
Flying Officer Donald Sinclair Jamieson of Winnipeg, had an eventful stint as a mid-upper gunner with 426 Squadron, RCAF.

In a Christmas letter written on Dec. 16, 1943, he describes his improbable survival after his Halifax bomber crashed upon its return to England after a raid over Germany.

“I kind of got an airoplane [sic] wraped around my neck since last I wrote you, or heard from you, so it leaves me with a little bit of news,” he wrote from the RAF hospital at Northallerton near York.

“We were just over our own country coming back from Berlin. We decided to come down through the clouds to see what good Old England looked like so we did. The clouds were on the deck instead of in the air and we hit the deck at a hundred and ninety miles an hour.

“We spread our kite out over a stretch of 200 yds [180 metres] and out of the seven of us five were killed and one broke his back. I only got 10 stitches in my head.”

What upset him most, it seems, was that he had hoped to get drunk at Christmas and finish his tour by New Year’s.

The following June, while returning from a raid on the Metz marshalling yards in France, Jamieson’s plane was shot down. All seven crew bailed out successfully over France and were sheltered by residents of the French village of Honguemare.

Jamieson and another crew member were captured on July 14. They were taken out of the prison on the night of Aug. 21, 1944, and executed. Their bodies were never found. Don Jamieson was 20 years old. 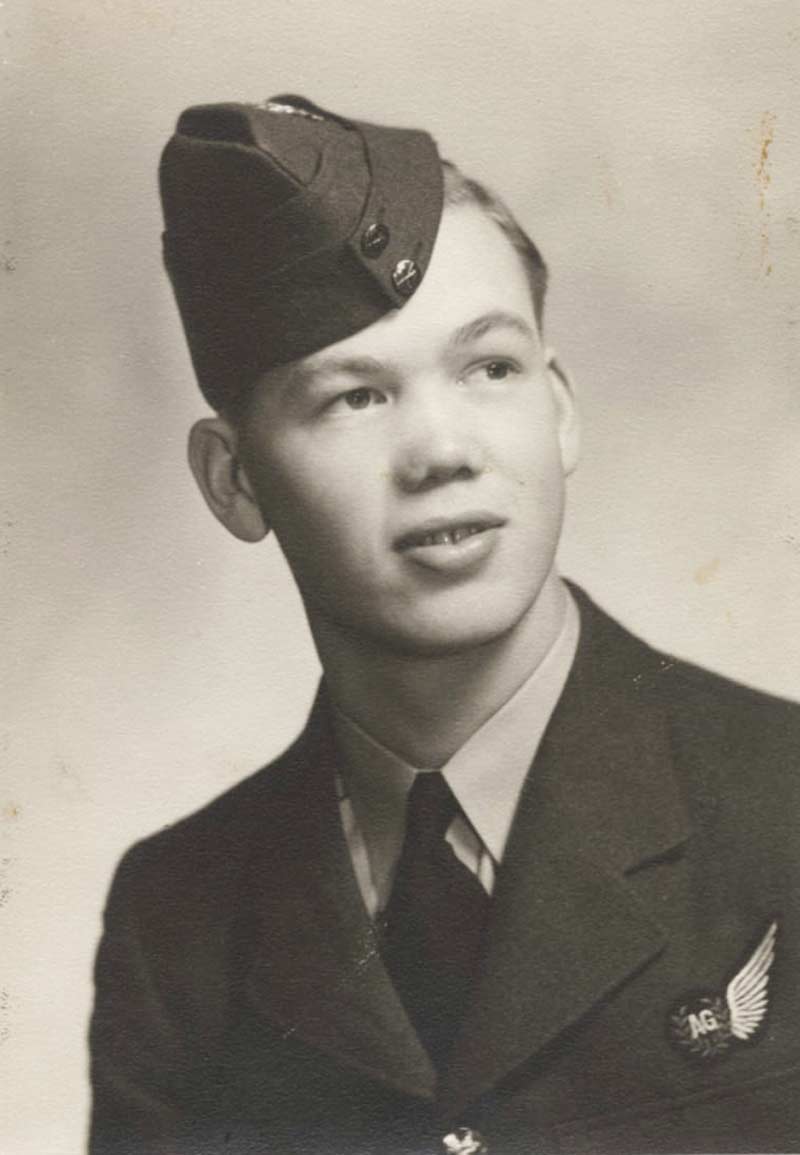 In his last Christmas letter, written on Dec. 29, 1941, he talks of homesickness.

“I received your lovely Christmas parcel and it was swell,” he wrote his parents, jeweller John Balfour Sr. and wife Wilhelmina. “Gee it was so nice having everything all wrapped up like Christmas—it sure is tough being so far away from home but it must be I guess.”

He thanked them for the pajamas, a scarf and a shirt, which he wore for the first time to the Christmas dinner and stated, “as I have a new uniform looked pretty good.”

“The dinner was good but not as good as the one I would have liked to be at (Guess where?). We had roast turkey, dressing, vegetables, mince pie etc. Harry and I invited a nice young girl to have dinner with us…. It sure didn’t seem like Christmas but it was O.K…. I feel a little sorry that I was unable to send anything home but my love.”

Two months later, on Feb. 27, 1942, Gray and three crewmates were killed while returning from night operations over Germany when their bomber crashed in Yorkshire, England. Gray, 21, was buried at the Doncaster (Rose Hill) Cemetery. 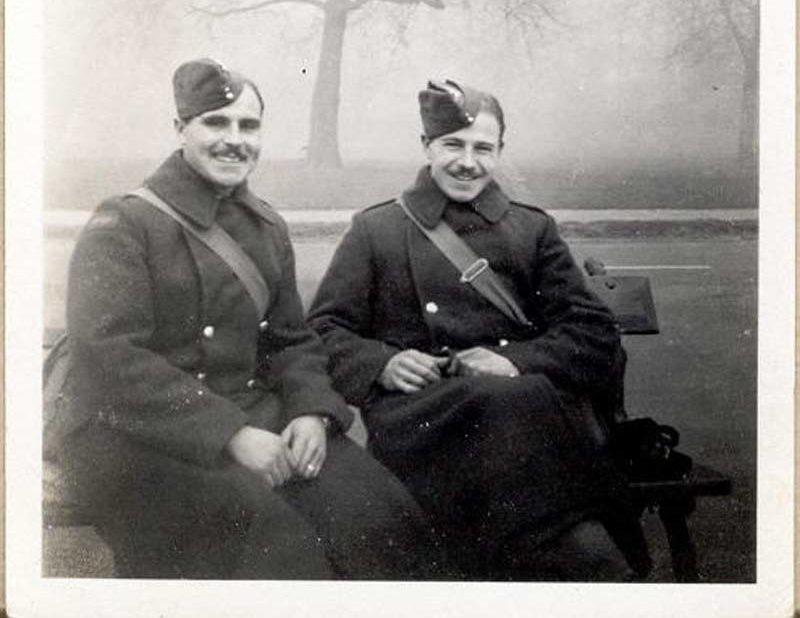 The Canadian Letters and images Project
Ernie Underwood of Winnipeg and his brother Leslie were members of the first Canadian anti-aircraft gun crew to down an enemy plane—a German Junkers 88 on the night of Aug. 6-7, 1941.

Both brothers took part in the disastrous Dieppe Raid of August 1942, during which Ernie was wounded on the beach and one of 1,946 Allied troops—most of them Canadian—taken prisoner.

On Dec. 29, 1942, he wrote a letter to a friend. He was in good spirits—two days before Christmas he and others had been transferred to an aircrew transit camp, from which they expected to move on to better conditions than the one they left.

“Well Bus old boy, how goes the battle & when are you coming over to get us?? Ha Ha,” he wrote from what was known as a Dulag Luft, likely near Frankfurt. “Things have changed a bit since I wrote last. It seems Ack Ack comes under the air force over here, so we have been moved to an R.A.F. camp.

“They are thought a little more of than the army & treated a little better, so we are quite pleased to be with them as you can imagine.”

Underwood was hoping he would land in a camp with other battery mates captured at Dieppe. “The rest will follow, I hope. Glad so many boys got back.”

He ended the war in Stalag Luft VI, was released, and returned to his adopted home of Victoria in 1945.

An award-winning journalist, editor and photographer. He has reported on the downfall of South African apartheid and from war fronts in Kosovo and Afghanistan.
All Posts
PrevPrevious ArticleWar Santa and the Ukrainian wish list
Next ArticleNazi treasure: The ever-elusive mythNext