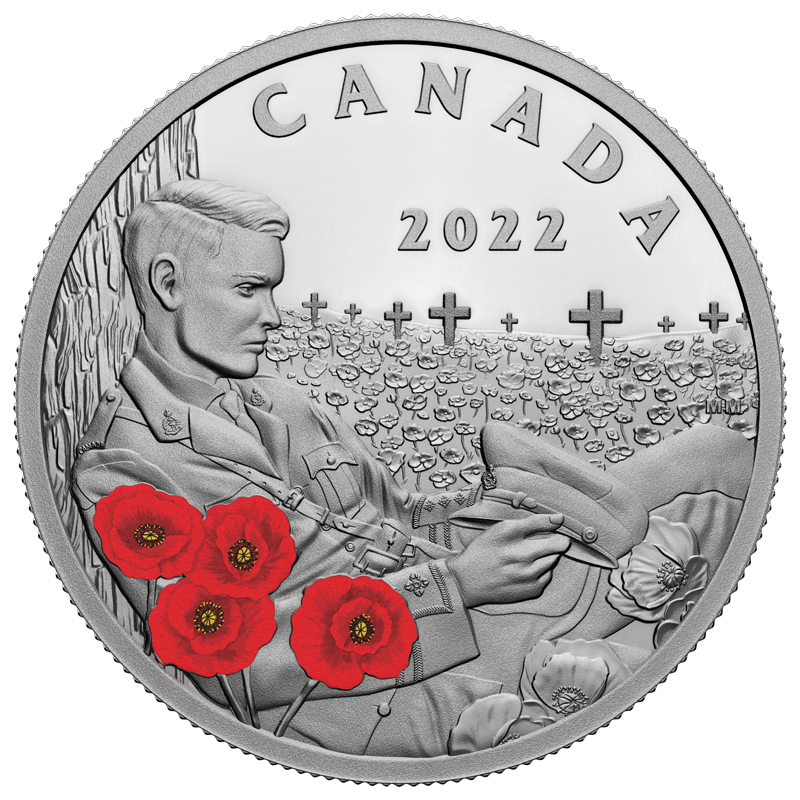 This Remembrance Day, the Royal Canadian Mint commemorates the sacrifices of soldiers and the emotional impact of war with a new $20 silver coin, inspired by John McCrae’s poem “In Flanders Fields” and First World War officers. The coin costs about $100.

The one-ounce coin, which became available on Sept. 6, depicts a weary First World War officer, inspecting his trench cap while lying against a tree in a field of blooming poppies. Grave markers, a reminder of his fallen comrades, line the background. Four bright red poppies with black centres overlay him.

There have been many Flanders Field-themed coins before. The image, dating back to the First World War, is synonymous with sacrifice and the horrors of war.

These non-circulation collector coins play an important role in educating Canadians. “We are here to tell Canadian stories,” said Suzanne Kasnakian, product manager for the Mint. She believes the story of Flanders Fields still resonates with Canadians and can be a “learning experience.”

The goal is to “bring you back to the scene of the Second Battle of Ypres in West Flanders, Belgium, where you see a medical officer after the battle, having gone through that experience,” said Kasnakian.

The coin has been in the works for at least a year, and involved numerous drafts and consultations with military experts, veterans and historians. Coin designs are usually not contentious, however, the officer’s insignias, crosses and uniform and other details were painstakingly verified.

This commemorative coin began with the idea of “focusing on the origins of the poppy and how it became a symbol for service and sacrifice,” said Kasnakian.

To guide the artist, Kasnakian wrote a brief that explained what she wanted the coin to depict. She described how the officer should be dressed, how the poppies should look and even what facial expression should be shown. Pictures were also used for extra clarity.

After the details were approved, the briefs were sent to three potential artists who were given two weeks to submit a draft. The chosen artist then worked with the Mint to create the perfect image.

“It really starts with product management, and a vision of what they want to see in the coin, and giving the artist enough to bring that to life,” explained Kasnakian.

The Mint has produced all of Canada’s circulation coins since its inception in 1908, but commemorative coins are much newer, having been around only since the 1950s. One of the first celebrated the 100th anniversary of the discovery of a process for extracting nickel from ore in 1951.

Collector coins help keep the Mint operating. “The commercial success of our current coin program is instrumental because it supports the viability of the Mint as a whole,” said Alex Reeves, the Mint’s senior manager of public affairs. “So, you have to make money, so you can make money.”

Since the Mint can put only so many new coins into circulation each year, it is limited in how many commemorative coins it can make. That’s why non-circulation collector coins are important. They can produce as many as they want, usually making over 125 different designs each year.

This coin will have a mintage of 8,500, up 1,000 from last year’s version. Remembrance-themed coins are very popular and sell easily—a sign of their value to Canadians.

“We have the potential to reach millions of Canadians to raise awareness of something that is important,” said Reeves. “It’s a very special opportunity that we have to tell some interesting and compelling stories that really remind Canadians what we’re all about as a nation.”