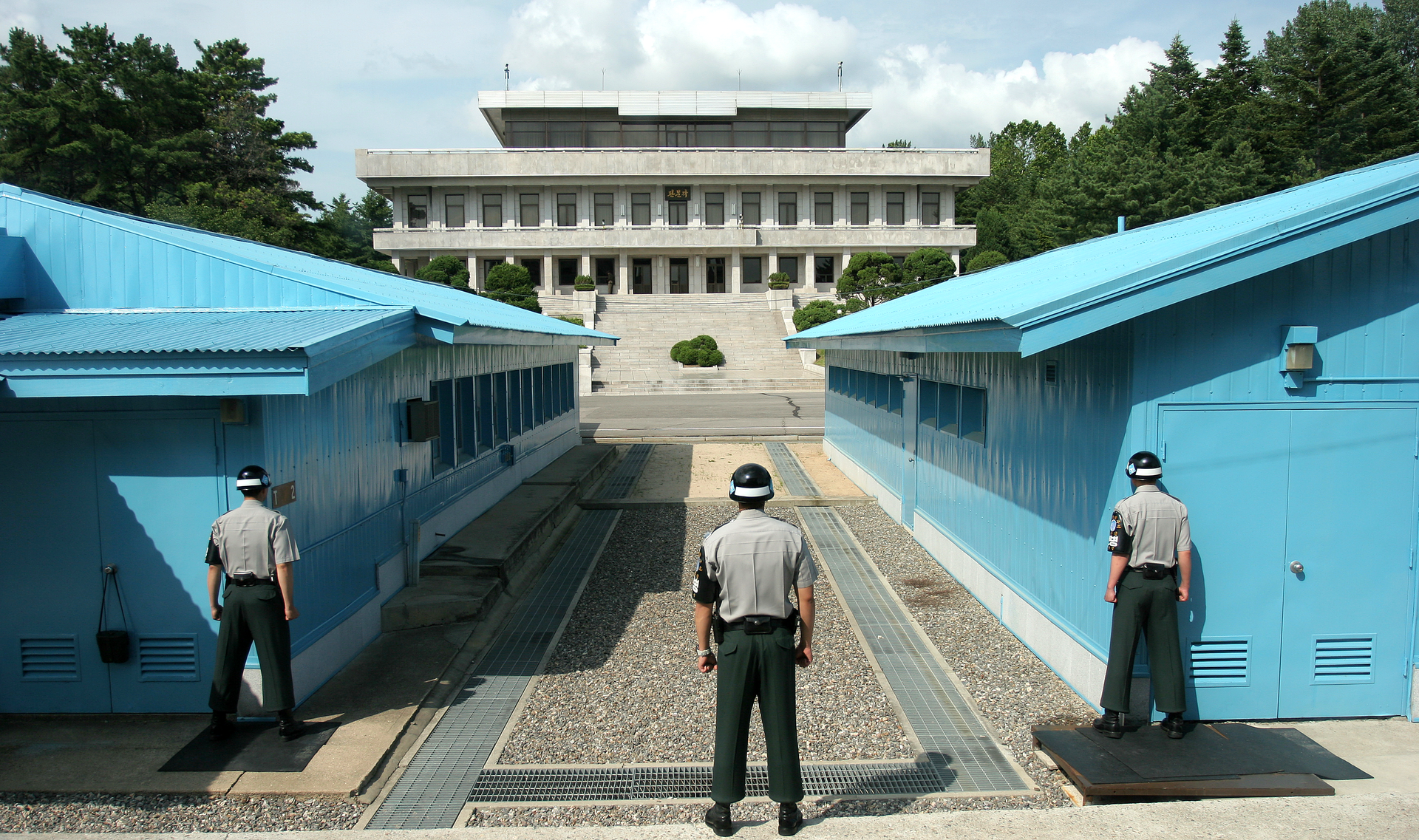 South Korean soldiers standing guard at the Joint Security Arm in Panmunjom.
Wikimedia/Henrik Ishihara Globaljuggler
When senior officials from the two Koreas met for the first time in more than two years on Jan. 9, they did not do it in just any old place. They chose Panmunjom, a bizarre village that contrasts armed military standoff with tourist attraction.

Known as the truce (or peace) village, Panmunjom is where the Korean Armistice Agreement was signed in 1953, putting on hold three years of hostilities between North Korea (Democratic People’s Republic of Korea) and South Korea (Republic of Korea).

Being an armistice, of course, it only stopped the fighting. The war has never ended. And Panmunjom, known to visitors as Panju, has become a focal point of the underlying tension between the two countries in the ensuing 65 years.

It is here in this demilitarized zone where opposing soldiers stare at each other through sunglasses across courtyards and through panes of glass while tourists wander about what is known as the Joint Security Area, the only point along the demilitarized zone at which the two sides come face-to-face.

“There were no nasty surprises of the hot metal at high speed variety,” wrote traveller Tim C from Hong Kong. “ROK guards in sunglasses and with a taekwondo attack posture seemed rather more fearsome than the lone DPRK sentry way up on the balcony of the North’s own guest house. Our young U.S. Army guide was quite informative, but obviously had to adhere to his script. It all lasted barely 15 minutes before we were ushered back to the bus and the JSA gift shop.” 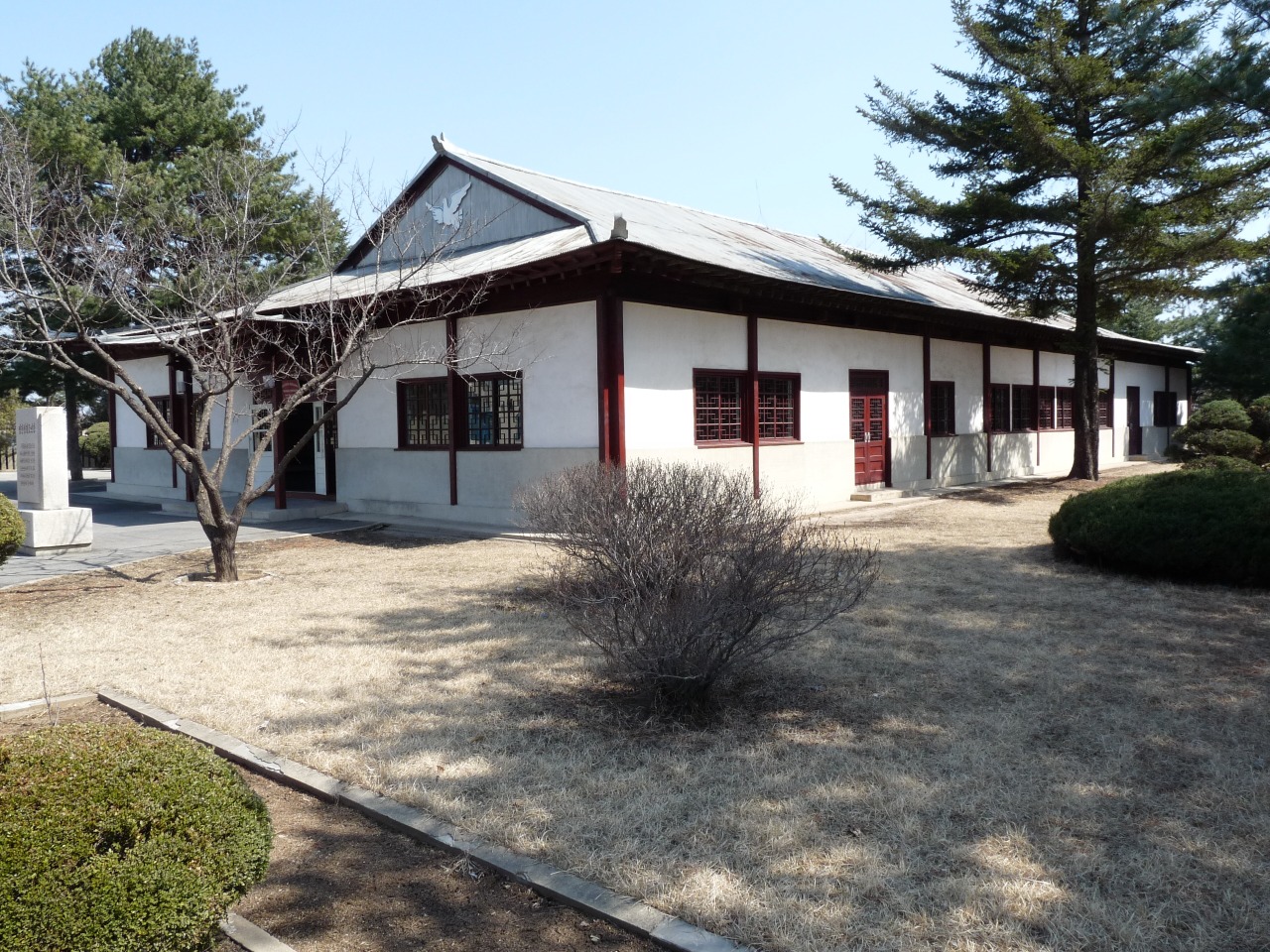 The North Korea Peace Museum.
Wikimedia
There are five buildings onsite, three in United Nations blue, one housing the Military Armistice Commission Conference Room where delegates meet over a conference table bisected by the line dividing the two countries.

South Korean soldiers who open those meeting-room doors to the North are always held by one of their comrades to prevent them from being grabbed by their North Korean counterparts. Such abduction attempts have been made in the past.

Tour groups from both sides regularly visit the area. Oddly, the North Korean tour has a reputation for being the more relaxed.

Tourists from the North can be seen “shuffling around in sloppy vacation wear, taking jokey selfies with DPRK soldiers,” The National Post reports, while in the South, visitors are subject to a strict dress code, including bans on jeans and shorts.

This is because North Korean soldiers in Panmunjom have been given to unpredictable bursts of violence.

In 1976, North Korea and the United States almost went to war over an incident spawned by a tree at Panmunjom. The 25-metre-tall Normandy poplar was obstructing the view from a vital checkpoint at the approaches to the Bridge of No Return, which crosses the Military Demarcation Line between the two sides.

Prisoner exchanges had been conducted on the crossing when hostilities ceased.

A South Korean work party, accompanied by UN troops, was dispatched to trim the tree when a North Korean officer arrived and told them to stop “because Kim Il-Sung personally planted it and nourished it and it’s growing under his supervision.”

The U.S. captain leading the operation, Arthur G. Bonifas, ignored him. Soon after, a truckload of North Korean troops wielding clubs and pipes arrived and, when Boniface ignored their commander’s order a second time, they swarmed the party.

Bonifas and another American were killed by North Koreans flailing axes the South Koreans had dropped.

There have been several defections from North Korea in recent months, the most notable coming in November when a North Korean soldier was shot multiple times as he dashed across the border at Panmunjom. He made it, and survived.

Such dramatics notwithstanding, a traveller from Bangor, England, called the place a “contrived tourist trap.”

“So this place is supposed to be ‘tense’ and stuff,” he wrote, “but honestly, to me the whole thing felt contrived and staged.” He reported one redeeming quality of his visit: the alcohol prices were a third better than at the airport.

A Dutch visitor, on the other hand, called Panmunjom “a very exciting must-see.”

“You can actually feel the tension when you enter the small blue barracks in which South and North Koreans meet each other.”

Panmunjom has been described as a rite of passage for visiting politicians, including Australian Prime Minister Tony Abbott and former U.S. presidential candidate and secretary of state Hillary Clinton.

The building in which the armistice was signed is now a peace museum on the North Korean side of the line. Inside, tourists report that signs tout the site as the place where U.S. “imperialists” were forced into an ignominious surrender by the glorious Democratic People’s Republic of Korea.

The Post reports that a complex psychological game has developed between the two sides at Panmunjom. South Korean guards are all unusually tall, while their North counterparts tend to be stunted by years of famine.

Then there was the “battle of the flags.” A nearby village erected a large flagpole in the 1980s. The North subsequently installed a bigger one nearby.

None of this seemed particularly present when five officials from each of the two sides met on Jan. 9. Nor did recent nuclear tensions between President Donald Trump and his adversary, Kim Jong-Un.

Officials emerged from the meeting announcing that the North would send a delegation to the Winter Olympics in Pyeongchang, South Korea, come February, that the South would consider temporarily lifting some sanctions to accommodate them, and that some long-dormant lines of communication between them would be restored.

CLICK HERE to get the hardcover edition of Korea: Canada’s forgotten war!