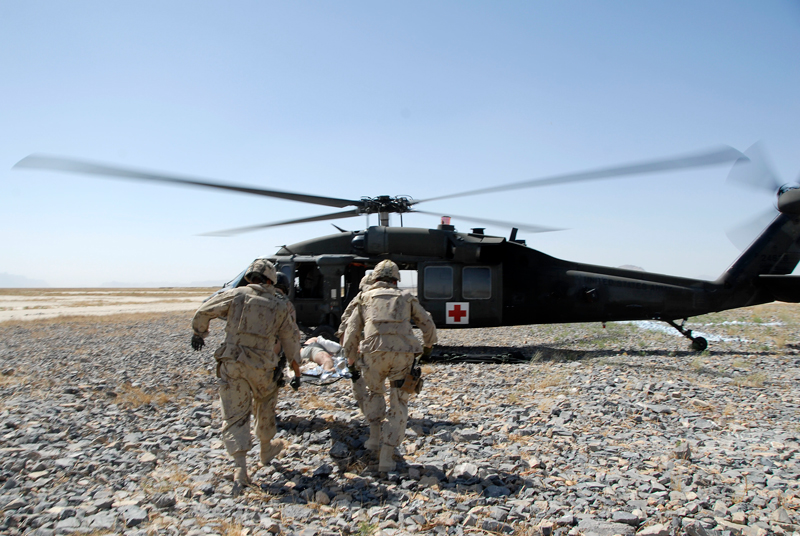 The challenges of battlefield medicine are about to change for Western allied nations, now that the focus of threats has migrated to China, Russia, Iran and North Korea.

Unlike counterterrorism operations, future battlefields are likely to have larger fronts, see more use of long-range ballistic and cruise missile strikes, and produce more blast and burn casualties.

The United States military is looking for solutions to gaps it sees in providing medical care in future multi-domain operations, which now include space and cyberspace along with land, air and sea theatres.

It anticipates fighting may be dispersed on multiple, perhaps larger and simultaneous, fronts. Personnel could face combat in large cities and remote and hostile environments that are difficult to reach.

The U.S. military also realizes it will not always have air superiority in every situation—and that has medical consequences.

Air superiority in recent conflicts reduced the time to evacuate wounded from battlefield to hospital to between 45 and 90 minutes, said retired Colonel Will Schiek, former brigade commander of the Walter Reed Army Medical Center, in a seminar for the Association of Military Surgeons of the United States titled “Future Readiness: Medical Battlefield Operations and the U.S. Army.” During the Vietnam War, evacuation took anywhere from four to 12 hours, he said, and in the Second World War, often more than 24 hours.

Loss of air superiority means future medical personnel could be spread thin and medical resupply sketchy. For the wounded, it means longer waits for evacuation, longer waits to get to sophisticated medical care and a lower survival rate.

“Force health protection and health services support to the warfighter will be challenging,” said Gary R. Gilbert, medical intelligent systems manager at the Telemedicine and Advanced Technology Research Center (TATRC), in an article on the U.S. army’s website.

Unmanned automated equipment is high on the list of desired support technology for a combat environment, as tasks like delivering essential supplies and transporting wounded can be done in areas far too dangerous for human pilots.

Robots could be deployed to pick up the wounded in dangerous situations and, after treatment by a medic, an unmanned aircraft could carry the wounded to a field hospital. But work is needed on the human-computer interface so medics in the field can easily operate this equipment.

To ensure availability of supplies, the U.S. is considering reinstituting a practice from the Cold War, when medical material was pre-positioned in order to be quickly available if needed.

Attacks could come with limited warning and on a larger scale, making it important that “critical medical supplies are in place before the first wave of combat casualties requires treatment,” said Brent Thomas in an article titled “The Future of Combat Casualty Care: Is the Military Health System Ready?” and published by RAND Corp.

Medical stations may be targeted, interrupting the flow of patients from front lines to field hospital to theatre hospital to safe territory. Even if there is a cache of supplies nearby, field hospitals may suddenly need more beds, operating rooms, critical care wards and staff. The military is looking for innovative ways to provide what’s needed if it can’t be delivered by traditional aircraft.

Since most combat deaths in the field are caused by blood loss and airway obstructions, new methods are needed to slow or stop hemorrhage and support breathing. Front-line troops need to be trained in their use as well as other life-saving interventions that have, until now, been administered by medics or farther from the front.

Canada has mobile surgical resuscitation teams to provide advanced care closer to the front, and they can be seeing to patients within an hour of arrival. In a 2015 article in the Journal of Military, Veteran and Family Health, their biggest logistical concern was cold chain storage for blood products.

Also on the wish list is a small, hand-held device loaded with medical information that can be used in the field to guide people at the front through life-saving medical procedures.

If casualties need to be held longer near the battle zone, innovative ways to fight infection will also need to be developed.

If wounded need longer for evacuation, they must also be concealed from enemy eyes and ears, both close to the front lines and in field hospitals. The U.S. army is investigating ways for mobile hospital units to move more frequently.

And a final jarring note for
families: in case of death, it may not be possible to evacuate remains, requiring a return to burying personnel in theatre and registering their graves for later recovery.

We all have to wrap our heads around what new and different warfare might bring.