For many years our school just outside Regina was blessed with a Remembrance Day speaker who served during the Second World War. His name is Dennis Chisholm, a giant of a man with a booming voice that draws you immediately into his presence.

Dennis has lived more than 80 years, but he still has that zesty passion for life—the same kind you experience when you are young and looking forward to a long and meaningful life.

A few years back, I found myself hanging on to each word Dennis spoke because it was to be one of his last visits to our school. Looking back, I’m ashamed to admit that I was too distracted by other business, including the completion of student report cards, to really listen to what he had to say during previous visits.

“We’re all dying off and need you guys to pick up the torch and keep it going,” he told the students and teachers. Those words have remained with me, but when I first heard them I asked myself: How could somebody like me help carry the torch? After all, I’ve never experienced what Dennis did fighting for our country. What did I have to offer that would actually grab people’s attention? It occurred to me that I could carry the torch through my passion for writing. When I approached him about writing his story, a great smile lit up his face. 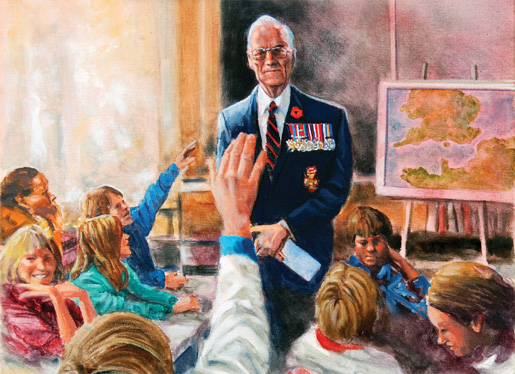 In 1939—shortly after the Second World War broke out—Dennis tried to enlist. He was 16 years old, attending high school in Prince Albert, Sask. Initially, he was denied at the recruiting office because of his young age. However, he could play the bugle and the army was in dire need of buglers. So it wasn’t long before they called him back.

He told me he will always admire his father who served in the First World War. He said he remembers sitting at the dining-room table, listening as his father told him he would never have to go to war because “we fought the most terrible war man has ever known. It was so terrible and so many people died that the world will never forget….”

But in the short span of 21 years the world did forget, and Dennis soon joined hundreds of men from the Prince Albert area who volunteered to serve their country. At the time of writing this story, there are less than 20 of these men left. “What’s remarkable was that Canada was the only country at the start of both world wars to field a total army, navy and air force of volunteers,” he said. “In those days there was a lot more patriotism than you see today. There are a lot of children today who don’t know the words to our national anthem or Canada’s part in fighting the Boer War, World War One, World War Two or the Korean War.”

Dennis spoke about his memories of people getting together to help each other during tough times—when “they had very little—making the best with what they had.” Today, he sees a lot of people wanting more and more, and taking for granted what they already have.

I asked Dennis why—when it comes to remembering military history—Canada seems lackadaisical when compared to the Netherlands, and the ongoing efforts there to remember their Canadian liberators. In Holland, schoolchildren tend to the graves of Canadian soldiers and also participate in commemorations. Without hesitation, Dennis had this to say: “Because Canada was never occupied. Canadians didn’t suffer like the Dutch people did. That suffering makes the difference even in today’s Dutch youth born so many years after the war….”

Dennis’s words made me feel proud of my Dutch lineage. When I spoke to my father about Dennis’s experiences, it unlocked his memories, too. He told me stories about growing up in Holland and what he experienced during the war. He remembers nights when he and his brother were out in the field of their father’s farm, oblivious to the danger while watching bombers fly past, and listening to explosions in the distance. He told me about people trekking out from the city to the farm, where they begged for food, and how his father always spared a tin can of grain.

He said these people would spend the night at the farm on account of the curfew. “Your grandfather never turned anyone away,” he told me. It was right then that we both sensed the presence of his father in the room—summoned back by the memories. I had never met my grandfather—he died when my father was just a teenager—but it really did feel like three generations were together for the first time.

I have Dennis to thank for this. By sharing his story with me, he caused me to think more about what he and so many others did during the war. So I would like to thank him and Canada’s other war veterans whose shared memories help link us to the past, to the importance of service and sacrifice, and to the need for younger generations to carry the torch.