The Canadian doctor who penned the poem “In Flanders Fields” in the midst of one of the bitterest battles of the First World War has been commemorated in Ottawa with a statue. 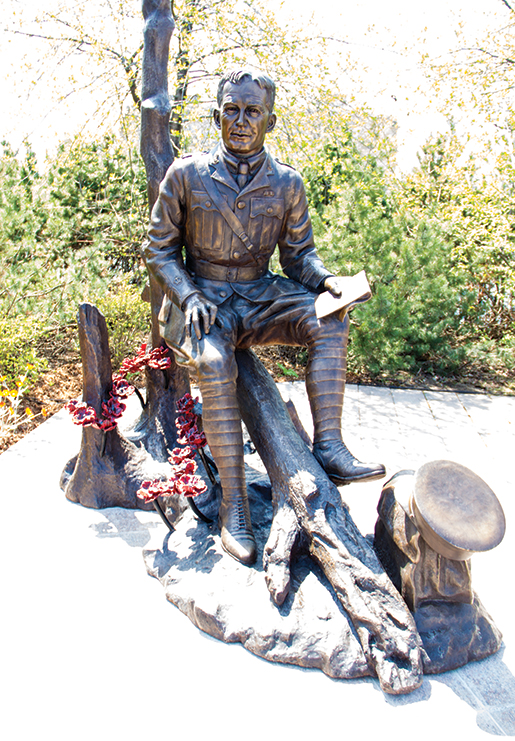 Ruth Abernethy’s statue portrays John McCrae in army uniform, writing his poem with poppies at his feet.
TOM MacGREGOR
The statue of Lieutenant-Colonel John McCrae was unveiled May 3 during a ceremony in Green Island Park to mark the centennials of the writing of the poem, the Second Battle of Ypres and the gas attacks at St. Julien in Belgium.

Employment and Social Development Minister Pierre Poilievre, the regional minister for Ottawa, reviewed an honour guard consisting of members of the Royal Regiment of Canadian Artillery and the Royal Canadian Medical Service. The RCA Band provided music and the Army Voices choir sang an arrangement of “In Flanders Fields” and a medley of First World War songs. Attending were a number of McCrae’s relatives, including Geills Turner, accompanied by her husband, former prime minister John Turner.

After a short remembrance ceremony, Poilievre assisted in the unveiling.

The statue was a way for the RCA to honour one of its own. McCrae had served in the Canadian Field Artillery in Guelph, Ont., and was commissioned a second lieutenant in 1893. In 1899, he left his medical studies to volunteer for the South African War.

He maintained his ties to the artillery as he became a respected researcher, doctor and teacher in Montreal. When the First World War broke out, he contacted his friend William Morrison, then the director of artillery, to offer his services as a gunner. Doctors were in greater demand at the time, so McCrae went overseas as the surgeon to the 1st Brigade, Canadian Field Artillery.

McCrae was with the Canadian forces when they first saw action during the Second Battle of Ypres. It was here on April 22, 1915, that German forces unleashed chlorine gas. The gas was used first against the Algerians in the French portion of the lines. When the French line broke, it left a gap in the Allies’ salient that the enemy was ready to exploit.

Yet the Canadians launched a series of counterattacks and closed the line. On April 24, gas was used again. This time it was aimed at the Canadian lines around St. Julien. Again the Canadians withstood the attack.

But the losses were terrible. The Canadians suffered more than 2,000 dead and another 4,000 wounded or missing. McCrae dealt with much of the carnage in his makeshift dressing station in a bunker at Essex Farm.

Exhausted by the work and haunted by the death of his friend Lieutenant Alexis Helmer, for whom he had conducted the funeral service, McCrae wrote his famous poem.

Although it was rejected by the first publisher McCrae approached, it was published by Punch magazine on Dec. 8, 1915. The poem became instantly popular among the Canadian troops and their allies.

The statue was co-commissioned by the RCA, the Canadian Army and the Royal Canadian Medical Service. Contributors included Veterans Affairs Canada, the government of Flanders and Dominion Command of The Royal Canadian Legion, which holds the poppy as a trademark.

The larger-than-life bronze statue, situated beside the National Artillery Memorial along the Ottawa River, was created by sculptor Ruth Abernethy, who also designed the statues of Oscar Peterson at the National Arts Centre in Ottawa and Glenn Gould at the CBC building in Toronto.

It features McCrae sitting, writing the poem, with poppies at his feet. “His iconic poem truly honours the service of all Canada’s veterans and preserves their legacy for future generations,” said Poilievre. “Canadians now have the opportunity to enjoy this statue and honour John McCrae’s contribution to our shared history.”

was with Legion Magazine since 1989 and served as staff writer, assistant editor and news editor. Before joining the magazine, he worked for The Huntsville Forester, The Edmonton Sun and Maclean’s. He is also the author of plays, four books of poetry and “Canada and the Victoria Cross” in the Canada’s Ultimate Story series.
All Posts
PrevPrevious ArticleOur readers speak An 88 per cent approval rating, according to readership survey
Next ArticleCoast-to-coast camaraderie at cribbage championshipsNext