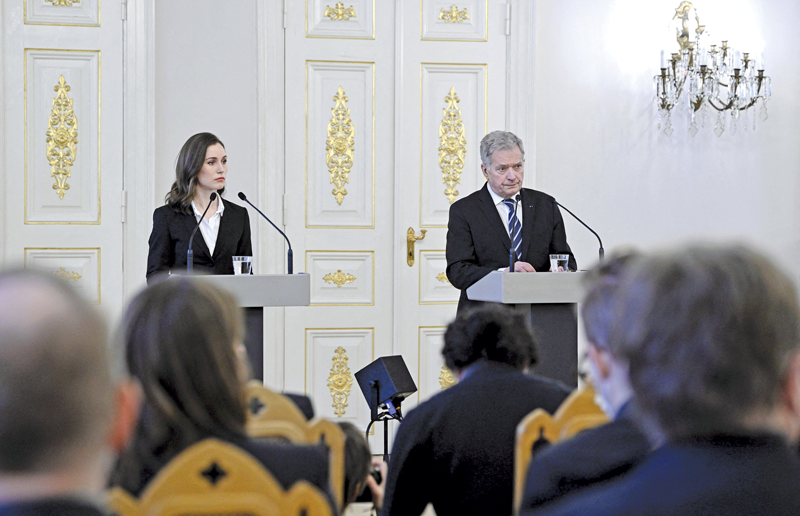 The Russian invasion of Ukraine in late February has shaken the world and Western democracies in particular. It is likely that many members of the North Atlantic Treaty Organization, possibly including Canada, will begin to increase defence spending and the size of their military forces as a result.

There are two neutral Nordic nations near Russia that may react similarly, especially given concerns that Moscow’s attention might soon focus on them—Finland and Sweden.

Finland was invaded by the Soviet Union in 1939. It put up an extraordinary defence that inflicted significant losses on the Red Army—between 321,000 and 381,000 casualties—but in the end, Finland relinquished nine per cent of its territory in a peace treaty.

When Germany invaded the USSR in 1941, the Finns joined in. After the war, Stalin essentially forced the Finns to become a neutral power, giving rise
to the term “Finlandization” to describe the country’s tendency to avoid opposition to Russian foreign policy.

Finland was strictly neutral during the Cold War, largely a result of its 1948 Agreement of Friendship, Cooperation, and Mutual Assistance with the Soviet Union, when tensions between Moscow and the West were near their peak. The treaty ensured Finland would not face a Soviet invasion but, in return, it agreed to stay out of a Western alliance and allowed the neighbouring superpower to exercise significant influence over its domestic and foreign policy.

In the three-quarters of a century since the end of the Second World War, Finland has become a prosperous nation, much more Westernized than it was, and its leaders have declared that their sovereign country can do what it chooses. If the Finns want to join NATO, and if NATO will have them, then no one else has any right to object.

Both President Sauli Niinistö and Prime Minister Sanna Marin have been clear on that stance, the former saying, “Let it be stated once again: Finland’s room to manoeuvre and freedom of choice also includes the possibility of military alignment and of applying for NATO membership, should we ourselves so decide.”

Marin, who had been reluctant to consider joining NATO, changed course after the attack on Ukraine, saying: “Finland is ready to apply for NATO membership if the issue of national security becomes acute.”

Having bolstered its military co-operation with NATO and increasing its defence budget by 35 per cent in 2021 to 1.99 per cent of its gross domestic product (GDP), most Finns once decidedly against entering the Western alliance are now in favour. In a late February 2022 public-opinion poll commissioned by Finnish public broadcaster Yle, 58 per cent of respondents said Finland should join NATO. Given Russian President Vladimir Putin’s strong warnings against the organization’s further expansion, Finns ought to be leery of membership. Russia’s war against Ukraine has changed minds.

“Finland is ready to apply for NATO membership if the issue of national security becomes acute.

Then there is Sweden, the largest and richest of the Nordic countries.

Sweden was neutral in both world wars, but it had little option other than to sell raw materials to the Germans during both conflicts. It was either that or be invaded. As the Cold War progressed, meanwhile, Sweden maintained its neutrality, but Stockholm was forced to rethink its policy when two Russian warships entered Swedish waters in September 2020.

Sweden had abandoned mandatory military service after the end of the Cold War but reinstated it in 2018 after Russia began military exercises in the Baltic and seized Crimea in 2014. Although Sweden also co-operates militarily with NATO (and sent troops to Afghanistan), its defence spending remains low (1.2 per cent of GDP in 2020, not far off Canada’s 1.4 per cent). To join the alliance, Stockholm would need to pledge to reach NATO’s two per cent goal.

Public opinion on the issue remains divided in Sweden. But after the war in Ukraine began, 51 per cent of respondents to an early-March survey conducted by Swedish tabloid Aftonbladet were in favour of NATO membership and only 27 per cent were against it. In another post-invasion poll, by Ipsos-Novus, 75 per cent also indicated they are afraid of Russia as a superpower. In the Swedish legislature, most of the parties favour an option of joining NATO.

Both countries can likely expect a fierce Russian response if they do seek to join NATO. Neither seems likely to be intimidated, however.

Moscow’s biggest concern would be if NATO stations troops and advanced weaponry in Sweden or Finland. Neither country’s armed forces are large enough to threaten Russia, but NATO troops or weapons there might. Or not. The relatively small NATO forces in Lithuania, Estonia and Latvia, where Canada leads the NATO tripwire units meant to deter aggression, have not led to an increase in Russian threats against these former states of the USSR.

Putin may have counted on his large and fast-moving assault on Ukraine to scare the West. Instead, NATO seems freshly unified in imposing heavy sanctions on Moscow, Putin’s cronies, banks, pipelines and trade. These will hurt. But so, too, would two neutral states clamouring to join NATO.

Public opinion in Russia is not as insulated from the West as it was a few decades ago. The sanctions are biting, and if Sweden and Finland move toward the Western alliance, Putin’s grasp on power might begin to waver.