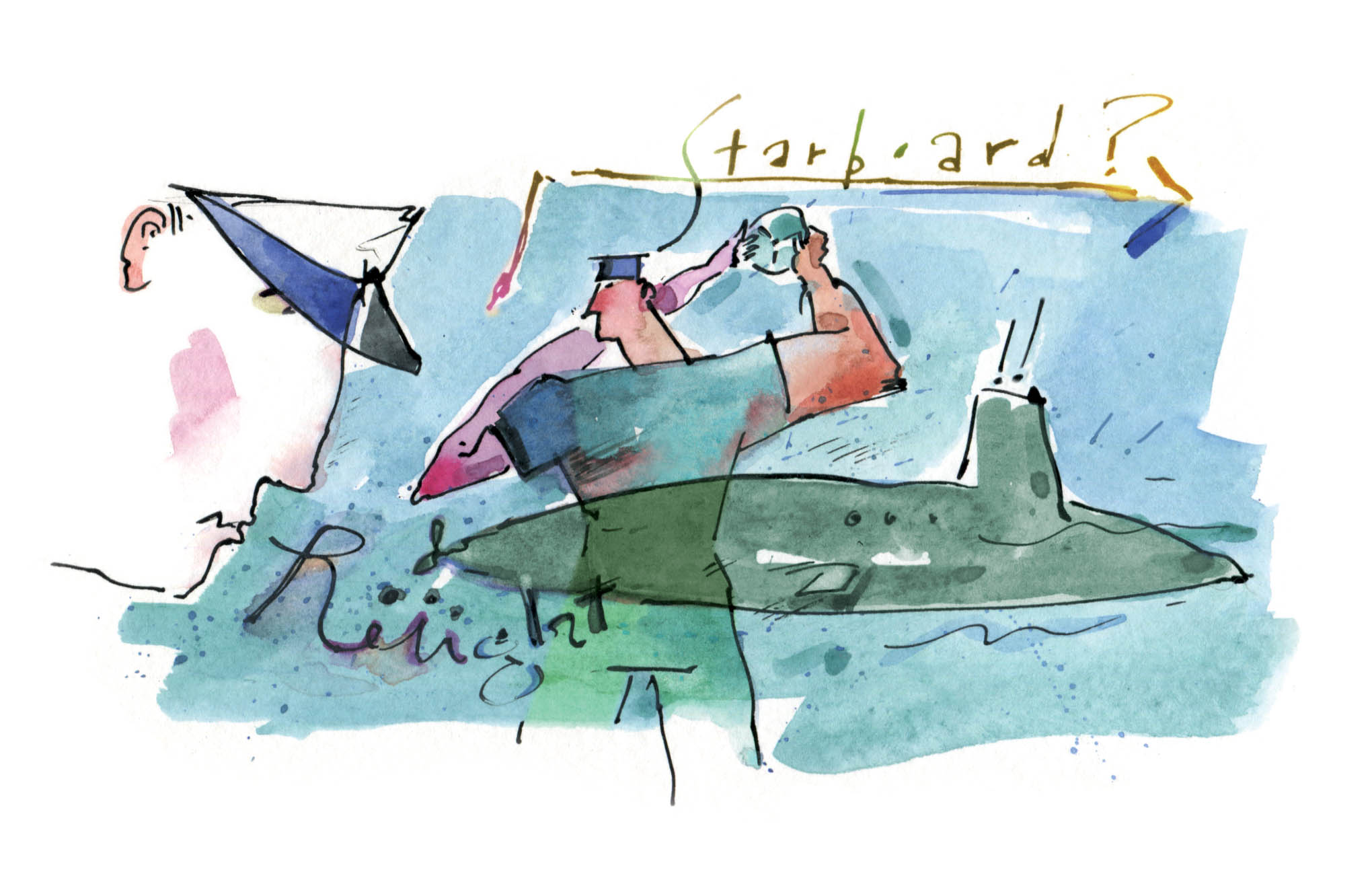 As a naval reservist, Fraser McKee of Toronto completed a long anti-submarine specialist course in the 1950s and ’60s. He knew how to hunt subs, but knew very little about subs. So he applied for submarines and served in the Royal Navy’s HMS Astute (P447) when it was based in Halifax and aboard HMCS Rainbow (SS75) on the West Coast.

Rainbow was a former American boat, so helm and engine orders were couched in U.S. terms (right standard rudder, port back one third, etc.). Fraser had been aboard a week when his commander asked if he felt up to diving the boat. Fraser said yes and the CO went below, saying “When I click on the voice loudspeaker, you dive the boat.”

The clicks came and Fraser gave the order. Two lookouts dropped into the sub. Fraser followed, pulling down the hatch. Since this was supposed to mimic an emergency, procedure called for a quick course change.

As Fraser reached the control room, the helmsman looked over his shoulder and said, quietly: “You mean right 20 degrees rudder, don’t you, sir?”

Fraser’s reaction as he recalls the dive? “AARRGH. Of course, American boat.”

All was well, however.

“Fortunately, all our RCN crew in those days had started in the surface navy themselves. No one else said anything. A most understanding lot.”

Retired squadron leader Norm Hull of Ottawa remembers a deployment of his fighter squadron in 1957 to Cagliari, Sardinia, for air-to-air gunnery practice over the sea.

When the deployment ended, a group of pilots ventured out for a real Italian meal but found the restaurant’s Italian menu incomprehensible. They used sign language to say they would have whatever the Italian diners at the table beside them ordered.

The waiter gave both tables a large, shallow bowl filled with red sauce. The rim of the bowl was lined with small, plucked birds hanging head down toward the sauce. What to do? “No sweat, just do what the next table does.”

What they did was take the birds by the feet, dip them in the sauce and swallow them whole.

Norm decided to lead the way and gulped down a couple as his squadron mates watched aghast. No one followed his lead.

“About three in the morning, I was in such excruciating internal pain that the flight surgeon was summoned. He immediately made arrangements for me to be transferred to a hospital in Cagliari.”

When Norm awoke the next day, the squadron had flown and he was alone in a large room in a Sardinian hospital.

“To my dismay, numerous women would enter my room, stand at the foot of my bed, stare at me a while and then leave.”

Eventually a nurse came in and explained in broken English that she had been studying English on phonograph records and asked if she could practice speaking with him. Norm was fine with that, but asked, “Why do all these women come into my room and just stare at me?”

“Because,” she said, “you are the first
man patient we’ve ever had in this mater-nity hospital.”

• Never tell a sergeant you have nothing to do.

In July 1943, Major-General Christopher Vokes was commanding the 2nd Brigade of the 1st Canadian Infantry Division in Sicily. In his memoirs, he tells a story about setting off one day to find the Van Doos (which were part of another brigade). Vokes, his driver and his batman drove down a dusty road late one afternoon. As they rounded a bend, they came across a soldier “dirty and disheveled, wearing a khaki drill uniform, but no hat.”

The jeep stopped and the soldier walked over, stuck his gun in Vokes’s ribs “and shouted words I did not understand.” Vokes assumed the man was speaking Quebec joual and grew angry.

“Stand to attention,” he shouted. “And take that goddamn gun out of my ribs.”

The soldier pulled himself up and stood weaving. Vokes decided the man was drunk and ordered his driver to move on, leaving the soldier to stare after them.

A few hundred metres down the road, a motorcycle dispatch rider caught up with Vokes and asked if he had been stopped by a soldier back down the road.

Vokes said yes, there was a drunken French-Canadian on the road.

Hah, said the dispatch rider. “He was drunk, all right, but he was a German. I just had to run over the bastard.”

Vokes decided he was well off course and past the front lines. They turned back and found the Van Doos right where they were supposed to be on the map.

“So much for my map reading ability that night,” Vokes wrote.

> Do you have a funny and true tale from Canada’s military culture? Send your story to [email protected]