Researchers have long known that constantly challenging the brain through things like learning a new language or taking up a musical instrument helps keep the brain sharper as we age. Now we can add playing video games to that list.

Researchers at the University of Illinois have found the mental workout of a video game requiring strategy improves cognitive skills for everyday life. Adults in their 60s and 70s trained to play the strategy game, Rise of Nations, showed improvement in verbal recall, ability to switch between tasks, working memory and reasoning ability, among other things. The object of the game is global domination; to win, players need a variety of skills to build virtual cities, operate armies, manage economies, feed and employ populations, and create a civilization.

Chief researcher Dr. Arthur Kramer also discovered the more the seniors played, the bigger the improvements, leading him to report in the journal Psychology and Aging that video gaming is one way for people to keep mentally fit as they age. He also said exercise, socializing and eating well are important for cognitive function in later years.

“Video games have been used since 2005 to help patients at the Toronto Memory Program,” says director Dr. Sharon Cohen, a behavioural neurologist and professor at the University of Toronto. But anyone worried about their brain health can benefit from video games that offer a mental challenge, she said in an interview with Legion Magazine. Such play “fortifies connections” between nerve cells in the brain, producing a ‘cognitive reserve’ that can delay onset of problems. She echoes the experience of the U.S. researchers in that “there is carryover” from game playing to increased mental capacity for everyday life skills.

“People with memory problems still can learn,” she says. A good mental workout strengthens areas of the brain involved with planning and being able to shift from one idea to another. “Certain skills can be improved even in older people and those with memory problems.” She also praises games that allow competition with others for providing social stimulation—especially with grandchildren.

A medical diagnosis late in life that calls for a change in diet can be overwhelming for seniors who fear they’ll not only have to change the shopping and cooking habits of a lifetime, but also have to give up the foods they love.

Not necessarily so, says Registered Dietitian Cara Rosenbloom, director of clinical nutrition at MDDirect in Toronto. By using the nutrition fact panels on packaged foods, consumers can find products that help them meet the requirements of their new diets without giving up everything they love.

Nutrition labels are one way baby boomers can cope with the need to change their diets due to medical problems like diabetes and heart disease, the risk of which increases with age. Nearly 18 per cent of Canadians over retirement age, and 28 per cent of those over 80, are living with heart disease. As well, diabetes rates have skyrocketed over the past decade; 2.4 million Canadians are diabetic, and it’s estimated six million more have “pre-diabetes”—rising blood sugar levels and insulin resistance that signal development of Type II diabetes.

Cutting fat, sugar and salt are frequent dietary recommendations for those newly diagnosed with heart disease or diabetes, says Rosenbloom, and nutrition labels make it easy to choose the best products for your health needs.

A key skill while grocery shopping is to “know how to compare two products by looking at the nutrition fact panels side by side,” she says. Yet a survey by the Canadian Council of Food and Nutrition found only 57 per cent of Canadians regularly read food labels.

For those who don’t yet know how to read the labels, Rosenbloom points out  that many grocery stores now offer free tours by dietitians who walk customers through the store, showing them how to use nutrition labels for comparative shopping. If your local grocery doesn’t offer the service, she advises calling the local public health unit to arrange a free tour.

Or use our handy guide to practise. 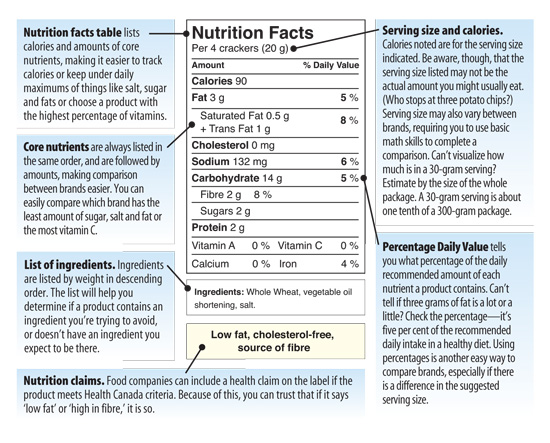