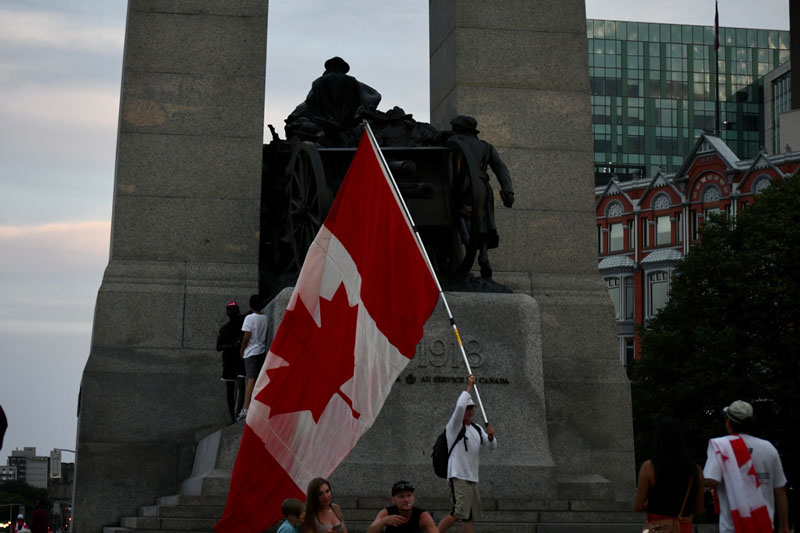 This past winter’s COVID-19 protest-turned-occupation of the nation’s capital amounted to an extremist attempt to take over the government, the prime minister’s top security adviser told a conference in March.

“The occupation of Ottawa was dug in, they had supply chains, they had organization, they had funding coming in from across Canada, but also other countries,” Jody Thomas told the 2022 Ottawa Conference on Security and Defence.

“There’s no doubt they came to overthrow the government.”

What began as a protest by truckers over pandemic-related border restrictions turned into a full-blown occupation financed and driven by right-wing extremists whose agenda went well beyond the issue of vaccine mandates.

The Canadian Trucking Alliance distanced itself from the January-February protest, saying that, while protesters clogged downtown Ottawa streets, shut down businesses and harassed local residents, 85 per cent of the alliance’s member truckers were fully vaccinated.

The mandate the “freedom convoy” was originally protesting was invoked by the administrations in both Ottawa and Washington. Nevertheless, the movement gained worldwide attention and inspired similar protests in several countries, including the United States. It cost the City of Ottawa some $800,000 a day in policing.

Police brought the loud, three-week occupation to an end on Feb. 20 after a three-day operation in which they dispersed crowds with pepper spray, horses and stun grenades, towed more than 70 vehicles, and arrested 191 people—including four key organizers whose connections to the trucking industry were tenuous at best. Some 389 charges were initially laid against 103 participants.

The operation involving Ottawa cops, the Royal Canadian Mounted Police, Ontario and Quebec provincial police—along with other forces—came days after a similar protest blocking the Ambassador Bridge linking Windsor, Ont., and Detroit was broken up. That week-long blockade cost about C$350 million a day in cross-border trade and forced some industrial plant operations to scale back
production and dismiss workers because of supply issues. About 30 of the protesters were arrested.

Some convoy supporters signed a memorandum of understanding (MOU) issued by Canada Unity, a convoy organizer. The document urged governments to dispense with the “unconstitutional, discriminatory and segregating actions and human rights violations” that the vaccine requirements and passport systems represented.

It demanded that the Senate of Canada and the Governor General end all COVID-19 related mandates, reinstate those who lost their jobs by opposing health measures and form a new branch of government, of which Canada Unity would have partial control. Had the Senate or Governor General denied these demands, the MOU demanded they “resign their lawful positions of authority immediately.”

Canada Unity’s website claimed 250,000 supporters signed the MOU before it was taken down.

The mandate the “freedom convoy” was originally protesting was invoked by the administrations in both Ottawa and Washington.

The police action in the capital was aided by the Emergencies Act, controversially invoked by Prime Minister Justin Trudeau, which some Opposition MPs described as a “massive overreach.”

Thomas defended the short-lived measure, saying the occupation met the standard of extreme situation for which the act was intended. She explained it gave Ottawa the temporary powers it needed to “galvanize law enforcement, security agencies and financial measures in a way that we would have not otherwise been able to do.”

GoFundMe had suspended Lich’s $10-million-plus fundraising account after receiving police reports of protest violence and other unlawful activity. It said at the time it would return the money to donors.

Four protest supporters subsequently launched a new funding page on the cryptocurrency fundraising site Tallycoin. The “HonkHonk Hodl” account, believed to be tied to alt-right groups, raised more than $500,000 in Bitcoin before police blocked it and other protest-related crypto wallets from further transactions.

In February, a group of Ottawa residents won a class-action lawsuit to freeze 146 cryptocurrency wallets associated with the protesters. It was the first time a Canadian court had issued the so-called Mareva injunction against cryptocurrency.

The crackdowns were welcomed by security experts.

“I think domestic ideologically motivated extremism is here and it’s here to stay,” Thomas told the annual gathering organized by the Conference of Defence Associations Institute (CDAI), a think tank and lobby group.

“We have lived in the splendid, naive superiority that this was not our problem in Canada. That this was a south-of-the-border problem, that it existed in other countries, but not in Canada and that’s simply not true,” continued Thomas. “I am concerned about it.”

She said 26 Canadians have been killed and 40 injured since 2016 by ideologically motivated violence.

In an interview on the CDAI website, Bàrbara Molas, an expert on right-wing extremism, said she wouldn’t consider the movement that inspired the occupation to be extremist. By doing so, she said, people tend to “dismiss what are legitimate concerns.”

“Radicalism,” she explained, “always begins with legitimate concerns—‘Do I have a future? Am I going to get a job? Is the government protecting me?’

“Classifying the whole thing as extremism means dismissing those scattered, vague, but legitimate concerns that I think point to some of the perceived or actual shortcomings of the liberal democratic response to the pandemic.”

She said social isolation and an associated increase in internet exposure have contributed to an increase in rightward radicalization.

“There is a possibility that lockdowns pushed those already on the brink of extremism to engage more profoundly with online narratives that tend to favour the radical-right, xenophobia, protectionism, nationalism and white supremacy,” said Molas.

“I think this has caused a lot of anxiety and distrust towards the institutions that, traditionally, have been responsible for protecting and informing us—there has been a loss of faith in the social contract.”