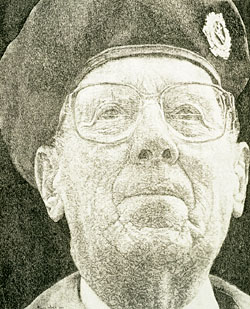 In the mid-1990s, Elaine Goble created a portrait of six veterans at a Remembrance Day ceremony. A few years later she drew her eight-year-old daughter listening to an elderly woman tell stories about her experiences during and after World War II. Goble noticed that while her daughter was trying to be polite, she was wriggling with inattention. The artist knew then she needed to search out and depict these survivors of war. “I spent the first 35 years of my life trying to figure out how to give back and I thought this is the launching point,” she said.

That process produced 14 black and white drawings on paper and archival matt board. Today, these works of art hang in the new Canadian War Museum in Ottawa. The drawings include WW II veterans, Holocaust survivors and children who were hidden from the Nazis during the war.

Some of the drawings are deeply personal, all are well composed. The graphite is stark and meticulous, with no colour to distract the viewer from the hard reality facing each subject. Quite often Goble brings the viewer in uncomfortably close to her subject. Her focus may be on a missing limb or a veteran’s medals and photos. Or it could be on the bifocal lines of an old man’s glasses. Each portrait is scrupulously drawn and loaded with emotion.

After completing the first 14 drawings, Goble put the series aside and began to explore other areas of her life. However, she is continually drawn back to the war theme. She tells me, “I have started again. I went to the Canadian War Museum and looked at what I have done and said that was a nice start. You have to raise the bar on yourself. Now I want to take it into darker themes of dementia and deterioration.” The artist knows that every day more of her subjects are dying and that time is running out for her to draw them. “At least four (of my subjects) have died and some are in poor health. I am really up against time,” Goble said.

Born in 1956 at St. Thomas, Ont., she studied at York University in Toronto and at the University of Western Ontario. She resides in Ottawa and has added a new dimension to the body of Canadian war art: the physical and mental price paid by individual men and women who survived war. It can be as graphic as a missing leg or as elusive as loneliness. As she says, “They need their story told as much as I need to tell it.” It is a good match.