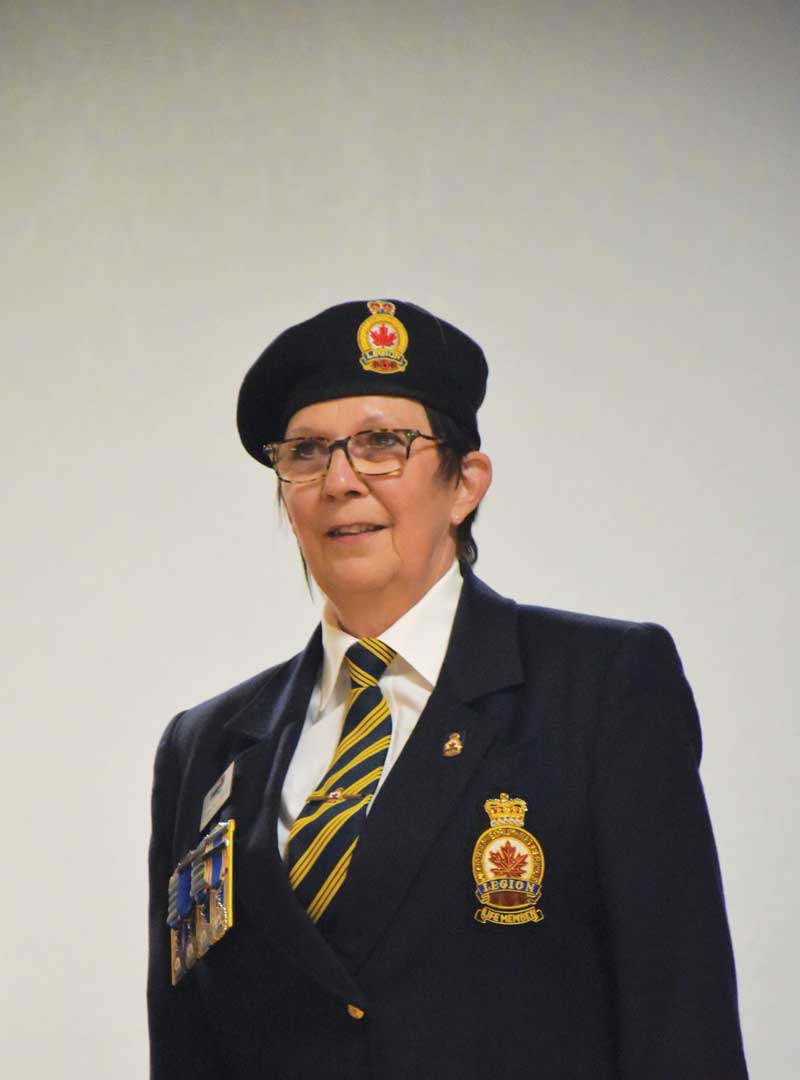 Rosaline LaRose (opposite) is the new president of Alberta-Northwest Territories Command.
Sharon Adams/LM

Not one branch had to close because of the pandemic. That good news kicked off the 52nd convention of Alberta-Northwest Territories Command, held May 6-8 in Red Deer, Alta.

When the pandemic began, “we expected to lose 19 of our 165 branches,” said President John Mahon. “We lost absolutely none to COVID,” though one branch—Rycroft—closed for unrelated reasons.

The event kicked off with many of the 199 delegates parading outside the Cambridge Hotel and Conference Centre. The parade was followed by a short ceremony during which Dominion Past President Tom Irvine and Second World War veteran Arnold Fisher were among those placing wreaths.

Fisher, who served in the Battle of the Netherlands and in Germany, declared the convention officially open.

The business session began with a debate about the need for restructuring the command, starting with cutting one vice-president position.

“We have not made any changes in command structure since 1982,” said Mahon, noting that, at that time, there were 60,000 members, 185 branches and nine districts. There are currently fewer than 35,000 members and 165 branches. “Council is too big,” he said.

“To continue on the road we’re going, we will have to raise the per capita tax,” said Mahon. A motion was made to reduce the number of vice-presidents from three to two, in what Mahon described as the first step in a gradual change to the executive. A small minority opposed the motion, but it was ultimately approved by delegates.

Irvine presented news from Dominion Command, noting the Legion has had to adapt over the past couple of tough years. “Your hard work has ensured that veterans were cared for and that branches survived this historic pandemic,” he said.

“The events you organize keep our branches healthy and alive, the welcoming atmosphere you provide to those who visit ensures they want to come back,” said Irvine.

Work at the national level, meanwhile, has resulted in a new digital membership card, the introduction of biodegradable poppies and wreaths and the growth of the poster and literary contests.

Dominion Command also successfully lobbied the federal government to provide $14 million to support branches across the country during the pandemic, said Irvine. It was later reported that Alberta-N.W.T. Command dispersed more than a million dollars of this funding to provincial branches.

Irvine lauded the work of winners of the Legion’s $30,000 Masters Scholarship in Veteran Health Research who “are doing amazing work under our name.” The most recent recipient is researching chronic pain among CAF members affected by traumatic brain injury. “Ultimately it’s about providing better health outcomes,” he said. “This is life-changing stuff.”

Also life-changing is the support the Legion provides for the Royal Commonwealth Ex-Services League (RCEL) to veterans and widows in the Caribbean. “In the past year we supported close to 120 veterans and widows,” for basic needs such as food and housing repairs, said Irvine. 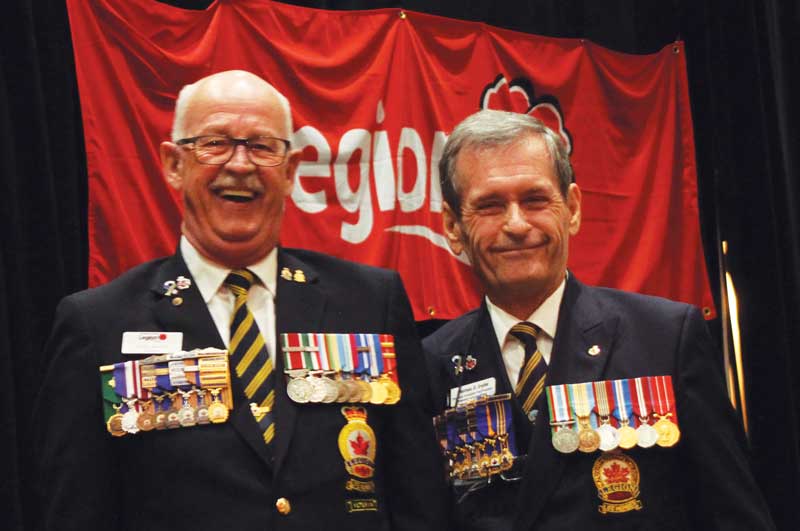 During the convention, delegates donated $12,000 to the RCEL; $42,500 to the Command Poppy Fund; $2,000 to the bursary fund; and $1,888.80 to command’s Polio Foundation, which has some 100 clients who are periodically provided with new equipment, such as wheelchairs. Six of those clients receive small stipends to make ends meet.

Delegates did not hear a full financial report at convention.

“A year-end review identified concerning data which triggered an in-depth review of the four-year financials,” reported Treasurer Chris Strong. In turn, that resulted in the auditors being unable to finish their work prior to the convention.

“We have completed the general budgeting for the year and the rest will be completed after the convention and the finalization of the audited statements,” he said in his report, which was passed with no discussion.

With the provincial sports fund boasting a healthy balance and earning interest, delegates voted to take the $1 per year per member that command had been putting into this fund and redirect it to general revenue. “Adding $32,000 per year to the general fund will make sure there are no lapses in any programs,” said Strong.

Since the 2019 convention, provincial service officers have processed 1,332 first applications for VAC benefits, resulting in the awarding of more than $64 million in disability payments, $115,000 in increased pensions and $1.8 million in pension back pay.

Director Suzette Brémault-Phillips of the University of Alberta’s Heroes in Mind, Advocacy and Research Consortium (HiMARC) reported on the program, which has, to date, received donations of more than $646,000 from Alberta-N.W.T. Command and provincial branches. In 2018, the command contributed to the funding of HiMARC’s early research in multi-modal, motion-assisted, memory desensitization and reconsolidation therapy, known simply as 3MDR, which uses virtual reality to treat chronic post-traumatic stress disorder (PTSD).

HiMARC “has grown exponentially,” said Brémault-Phillips. “We started out with $70,000 in funding for two projects—family resilience and 3MDR. As of eight months ago, we’re up to $9 million” in grant funding and dozens of projects.

Most veterans no longer meet the diagnostic criteria for PTSD after receiving 3MDR treatment. The results have been so promising that HiMARC has become internationally renowned for its research in the therapy.

HiMARC is also seeking veterans to participate in two other projects. 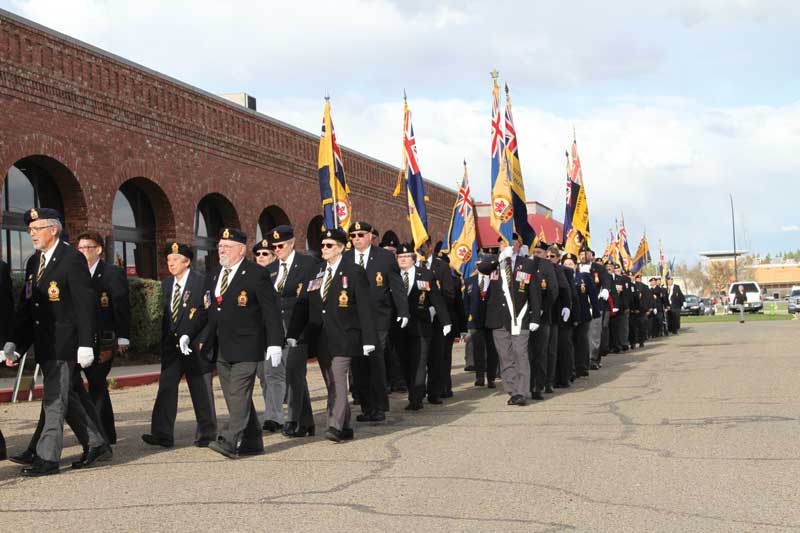 Delegates parade before getting down to business.
Sharon Adams/LM

Although there are reports that cannabis helps relieve some PTSD symptoms, alleviate pain and promote better sleep, “there is not enough research yet,” noted Brémault-Phillips. “It’s a very complex substance, and we are working to identify what works for whom, when, where, why and how…so veterans can make informed decisions.”

And HiMARC is looking for veterans who received psycho-therapy in virtual sessions to participate in a study on the effectiveness of therapy delivered that way.

History was made in the elections when Rosalind LaRose of Stettler Branch became Alberta-N.W.T. Command’s first female president. Unable to attend the convention due to the death of her husband Steve, LaRose sent a message that was read by Executive Director Tammy Wheeler.

“Comrades, we have a journey ahead of us. I have many goals to reach. We have work to do and as a united body we will reach these goals, bringing our command and Legion into the future.”

Velichko of Joe Wynne Branch was elected First Vice, defeating Vice-President Gord Morrison of Stony Plain Branch. Morrison was subsequently elected to one of the two vice-president positions, along with Kelly Lindbeck of Worthington Branch in Wainwright. Mac Torrie of Kingsway Branch in Edmonton was defeated; Kevin Holt of Grimshaw Branch declined nomination.

Strong of Innisfail Branch was re-elected treasurer over Bill Hart of Camrose Branch. Scott Sadler of Onoway Branch was acclaimed chairman, continuing in the role he has held since 2017.

The convention ended with the installation of new officers.