Widow of an Indian Chief Watching The Arms of her Deceas’d Husband.
ILLUSTRATION: RIVERBRINK ART MUSEUM

The War of 1812 was the first and last time our southern neighbour invaded the territory that is now Canada. But it wasn’t just the British and Canadians at war with the Americans. Even before war was declared in June 1812, aboriginal nations pledged allegiance to Britain and they too fought and died in the conflict.

As tensions heated up in North America, romanticism—the emotional art movement of the 18th and 19th centuries—was in its prime in Europe. Artists were painting canvases that idealized man’s relationship with the natural world, and the aboriginal people were perfect subjects for these expressive paintings. Printmaking was also becoming more popular and John Raphael Smith was one of the finest mezzotint engravers of his day.

Born in Derby, England, in 1751, Smith was the son of a landscape painter and by age 20 had become a professional printmaker, reproducing works from leading artists. Mezzotints are created by roughening a metal plate with thousands of tiny dots and then burnishing off those areas that should be lighter or white in the final print. Smith was masterful at creating tone and graduations in the prints. One dramatic mezzotint was titled Widow of an Indian Chief Watching The Arms of her Deceas`d Husband, based on an oil painting by Joseph Wright.

Wright described his work as “founded in a custom…where the widow of an eminent warrior is used to sit the whole day, during the first moon after his death, under a…tree lopped and painted; on which the weapons of the dead are suspended. She remains in this situation without shelter, and perseveres in her mournful duty…“ 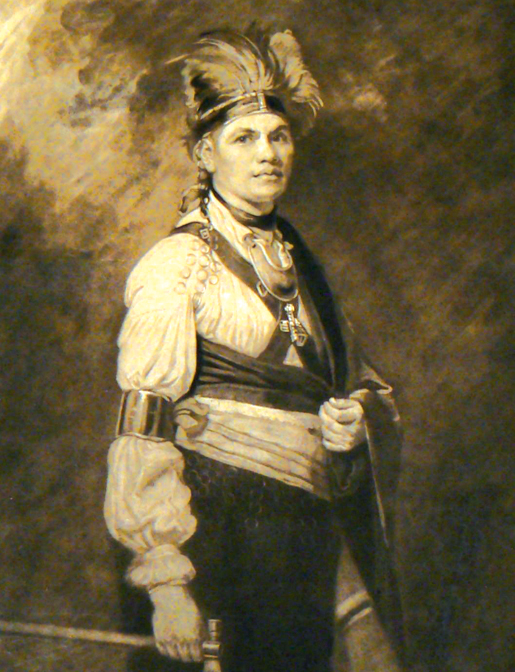 Light silhouettes her lonely figure as it streams through an opening in the storm clouds, waves crash on the beach below and mountains rise in the distance. It is a very dramatic image and a good example of romanticism.

Ironically, this same subject attracted Smith at the beginning of his career, when he produced a mezzotint of Joseph Brant from a portrait by the artist George Romney. Brant, a Mohawk leader, might have been the best known American Indian of his time. Even though his efforts to unite his people were unsuccessful, his cause was taken up a generation later by the Shawnee leader Tecumseh who would figure so prominently in the War of 1812.

These beautiful examples of mezzotint engravings are both delicate and detailed. Smith created the Widow in London on March 2, 1812, just three months before war was declared. He died later that same year.

Smith’s mezzotints are on display until Oct. 30, 2012, in the exhibition titled RiverBrink’s War of 1812 at the RiverBrink Art Museum, Queenston, Niagara-on-the-Lake, Ont. The exhibition includes artworks, archival material and objects from the permanent collection at RiverBrink along with loans from a private collection.  The exhibition showcases the international context of the war through the perspective of British, American, Canadian and First Nations participants.

The museum is located at 116 Queenston Street, Queenston, Niagara-on-the-Lake, Ont.