Canada is a true friend of Kuwait. Your country did not hesitate to answer the call,” Kuwait’s Ambassador to Canada Ebdulhamid Alfailakawi told Canadian Armed Forces members and veterans at a ceremony in Ottawa commemorating the 25th anniversary of the liberation of Kuwait.

The Feb. 27 ceremony was one of several celebrations held across the country, including those at the navy ports of Halifax and Esquimalt, B.C., marking the anniversary of the end of the Persian Gulf War. 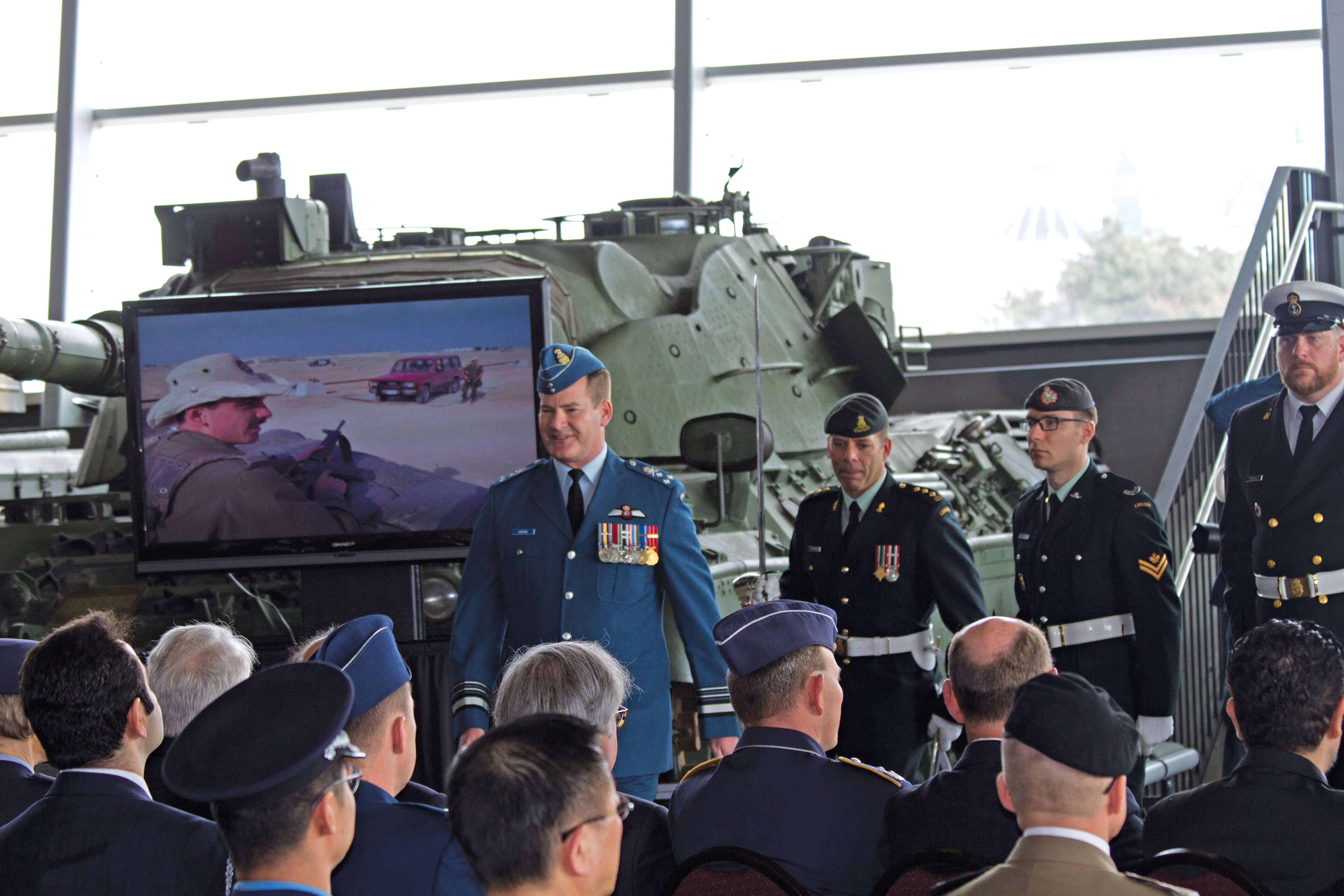 The ceremony in Ottawa was held in the LeBreton Gallery at the Canadian War Museum. A quarter guard of members representing all three elements of the service was on hand and inspected by Lieutenant-General Michael Hood, commander of the Royal Canadian Air Force.

In addition to the veterans, several veterans’ organizations were represented at the event, including The Royal Canadian Legion.

A perspective of the short war was given by Gulf War veterans Lieutenant-Commander John Williston and Major Ivan Dellaire in English and in French, respectively.

The United Nations passed a series of resolutions, including one demanding Iraq withdraw all its forces by Jan. 15, 1991.

Canada responded by supporting an embargo on Iraq and sending three navy ships to the Persian Gulf, the destroyers HMCS Athabaskan and Terra Nova and the armed oiler-replenisher, HMCS Protecteur.

An air task force of CF-18 fighter jets, from CFB Baden-Soellingen in Germany were also dispatched. The members of 409 (Tiger) Squadron and 416 (Lynx) Squadron became known as the Desert Cats because of their badges. They were given partial credit for destroying an Iraqi patrol boat and completed 56 bombing sorties against Iraqi forces.

Air Command also supplied a transport group with 27 CC-130 Hercules and five CC-137 Boeing 707, one of which was used to provide air-to-air refueling for coalition forces. One CC-144 Challenger was also provided for command and liaison duties.

Canadian medical personal served on board the U.S. hospital ship Mercy and with 1 Canadian Field Hospital from CFB Petawawa in Ontario, set up in the Saudi Arabian desert.

Also providing a perspective was Captain Saleem Abu-Ghosh, who was born and raised in Kuwait and is now a member of the RCAF. “Kuwait was a peaceful country where shopkeepers could leave their shops unattended to go to prayer,” he said. “We never knew what it was like to be occupied.”

“Twenty-five years ago today,
Canadian Armed Forces personnel
were engaged in operations
to liberate Kuwait.
Victory was only hours away.”

As a member of Kuwait’s air force, Abu-Ghosh was on high alert as Iraqi troops began massing on the border. “The alert was called off when Kuwait was assured that Iraq would never invade. It was then we were attacked and occupied. The air force managed to get all our planes, except one, out of the country and [we] stopped wearing our uniforms.”

Hood was among those serving in Canada’s air force. At the time, he was a CC-130 Hercules navigator in 425 Squadron. He, too, offered an overview of the operation.

“Twenty-five years ago today, Canadian Armed Forces personnel were engaged in operations to liberate Kuwait. Victory was only hours away,” he said.

The Iraqi forces had been under constant bombardment for a month before the ground war began on Feb. 24. On Feb. 28, 1991, Bush declared a unilateral ceasefire. Iraq agreed to abide by the UN resolutions and an official ceasefire began on April 6.

“The Gulf War ushered in a new era of Canadian operational missions, and we continue to use and build upon the lessons we learned from the war to this very day, in places around the globe and—most recently—in the Gulf region again,” said Hood.

Hood went on to talk about the impact of the war on families at home. “You must remember that although Operation Friction was only 25 years ago, it was a different world. No Internet. No e-mail. Few cellphones. I think I made three phone calls home over the duration of my deployment,” he said. “I remember speaking to my mother who was telling me she’d put a yellow ribbon around the tree outside of our house….It was the origins of an outpouring of relief by Canadian citizens and respect for the Canadian Armed Forces.

“Although our people did not sustain combat casualties, some returned home suffering from lasting medical conditions. Their care, and the care of all our veterans and serving personnel, continues to be of paramount importance,” he added.

Finally, the ambassador gave his speech, thanking Canada and assuring Canadians that they will always have an ally in the Middle East because of what they accomplished in the liberation 25 years ago.

PrevPrevious ArticlePensions, awards rise by 1.2 per cent
Next ArticleMilitary Moments: Battle of Beaumont-HamelNext