Home » Blog » Canada and the Holocaust

Canada and the Holocaust

Many young Canadians may be unaware Canada has any connection to the Holocaust, the Nazi extermination program that claimed six million Jewish people and millions of others during the Second World War.

That is about to change as Canada assumes chairmanship of the International Holocaust Remembrance Alliance . In his speech at the hand-over ceremony in Berlin, new Chairman Dr. Mario Silva said that in addition to international work, Canada plans a number of national initiatives to increase understanding at home of the Holocaust.

Canadians liberated Kamp Westerbork in Holland in April, 1945. This is where a few weeks before the end of the war young diarist Anne Frank boarded a train for Bergen-Belsen and her death. Canadian units  integrated into the British Army helped liberate Bergen-Belsen. 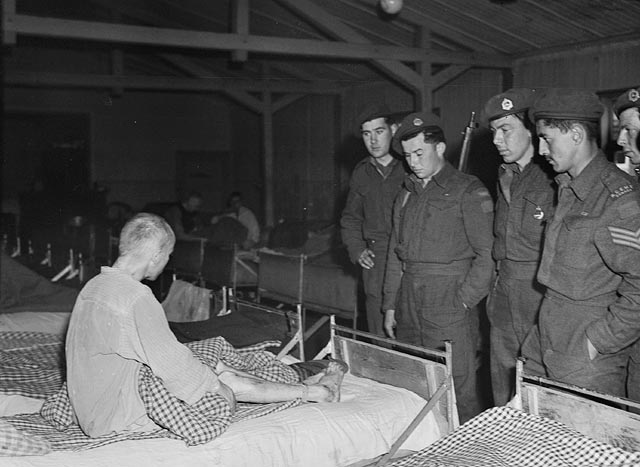 In this photo, members of the 3rd Canadian Division liberate prisoners near Weener, Germany, near the Netherlands border.

More than 40,000 survivors of the Holocaust settled in Canada after the Second World War—but prior to the war, few Jewish refuges found sanctuary in Canada.

Although Canada was home to more than 100,000 Jewish people at the beginning of the First World War, immigration dried up from a trickle to a drop due to a shortage of jobs, coupled with policies fuelled by anti-Semitism. Prime Minister Mackenzie King wrote in his diary March 29, 1938 that “I fear we would have riots if we agreed to a policy that admitted numbers of Jews.” Frederick Charles Blair, director of the Immigration Branch of the Department of Mines and Resources said, “No country could open its doors wide enough to take in the hundreds of thousands Jewish people who want to leave Europe: the line must be drawn somewhere.” Canada was among the nations refusing entry to the more than 900 Jewish refugee passengers of the MS St. Louis in 1939.

Silva, who will chair the Alliance for a year, said a national project has been launched to preserve more testimony of Holocaust survivors in Canada.  You can follow the links  here to read some survivors’ stories.

In addition, a national award will be presented to an educator demonstrating the best practices in Holocaust education. The Neuberger Centre and the University of Toronto will  host an international conference ; and Library and Archives Canada will develop a research guide to their Holocaust-era records.

Travelling exhibits will familiarize Canadians with the internment of Jewish refugees during the Second World War as well as the story of the MS St. Louis.

Do you have a story to share about the liberation of concentration camp prisoners?
International Holocaust remembrance alliance survivor testimony/