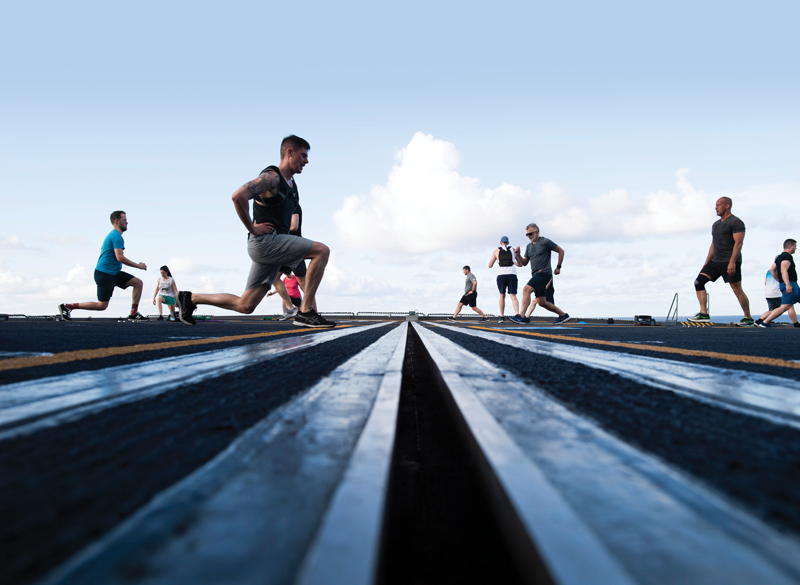 Military careers are hard on the body, particularly the joints.

Add to that the physical training and sports that keep personnel fit enough to do their jobs, and it’s no wonder lower extremity strains and sprains account for more than a quarter of serious injuries in the Canadian Armed Forces. One in 10 regular force personnel develop repetitive strain injury in the thigh and knee.

Studies indicate nearly a
quarter of serving members have chronic arthritis pain, as do more than a third of veterans.

Injuries accumulated in youth often show up later in life as pain, inflammation, stiffness, swelling and loss of flexibility.

It can prevent military personnel from doing their jobs, so the “suck it up, buttercup,” mentality is not a valid approach to injury. Rehabilitation of minor injuries can prevent major problems later, and exercise and the use of assistive devices, such as simple braces, may stave off surgery.

All CAF personnel need to be capable of digging, extracting a
casualty from a vehicle, building a sandbag fortification and carrying a stretcher, among other basic tasks. Fitness levels are measured each year in tests that include 20-metre sprints and dragging, lifting and loading sandbags. These tasks and tests are a significant stress on the knees in particular.

Knees are prone to osteoarthritis, also known as wear-and-tear arthritis. It is caused by deterioration of cartilage: the rubbery, slippery material cushioning the ends of the four bones that meet at the knee.

Deterioration can be caused by repetitive movements, such as squatting, high-impact exercise like marching or by banging or twisting the knee.

Since cartilage cannot be regrown (though scientists are working on it), knee injury sufferers are left to rehabilitate the joint as best as possible and manage pain with heat and cold packs, anti-inflammatory drugs and compression braces. The final option is knee-replacement surgery.

But wouldn’t it be nice if wear and tear and injury could be prevented? Militaries around the world are exploring the possibilities.

In the United Kingdom, stretching and strengthening exercises reduced knee pain of recruits in heavy training by 75 per cent.

Finnish researchers suggest rehabilitation could be better targeted (and more quickly started) if deformed tissue and leakage of protective fluid from cartilage is diagnosed sooner.

The German military is testing knee braces to see which best stabilizes the joint under different conditions—running, climbing stairs, lifting heavy objects. Bracing “might be a cheap and efficient alternative” to prevent injuries such as meniscus tears and osteoarthritis, concluded researchers.

A decade ago, the American Defense Advanced Research Projects Agency (DARPA)—the big guns in Western military research—created a program to address musculoskeletal injury, the No. 1 reason for U.S. military discharges.

DARPA funds research into stabilizing and reducing joint stress, which sped up development of exoskeletons and mechanically assisted knee braces.

And, of course, it wouldn’t hurt if this research also helped meet another of its goals—augmenting human capabilities to enable personnel to run further, lift heavier loads, sleep less, see in the dark, etc. It’s called human performance enhancement.

In Canada, the Department of National Defence collaborated with Halifax-based Spring Loaded Technology to test a knee brace that stores energy as the knee is bent, then uses that energy to help carry the load when the leg is extended.

A soldier with a meniscus injury saw even greater improvements, doing seven times as many loaded squats and 10 times as many leg presses using the brace.

While the army helped with the research, a spokesman for the CAF says it does not use the brace. Militaries around the world are testing various power-assist knee braces but uptake has been slow.

Dozens of companies around the world have begun marketing so-called bionic knee braces, chiefly to consumers, at prices starting at about $1,500 and rocketing upward, depending on the degree of physical assistance provided and technology used.

These braces could save a lot of pain for people with sore knees and ailing health-care budgets alike.

But health-care budgets, like those of the military, have many demands so it will likely be a while before we regularly see bionic knee braces on our family, friends and defenders of the country.