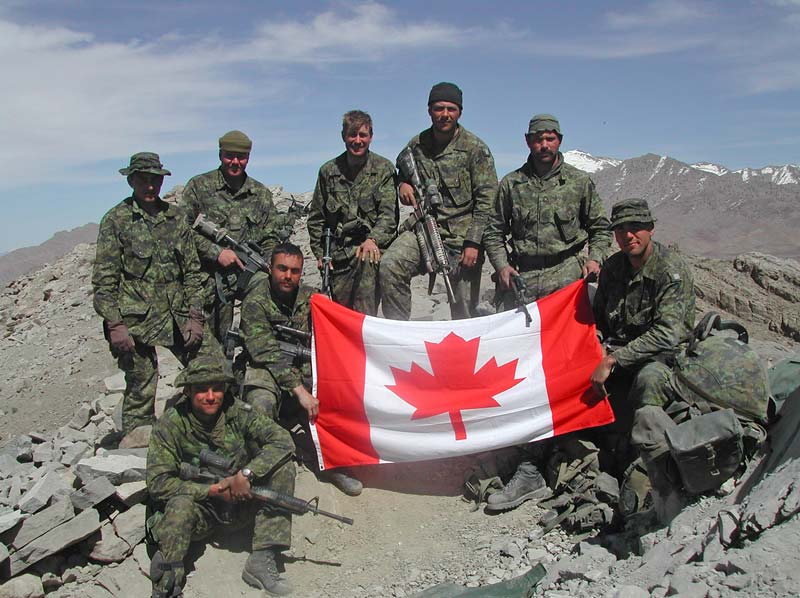 Osama bin Laden had more in mind than inflicting incidental death and mayhem when he dispatched 19 al-Qaida terrorists to strike at the heart of American economic and military might two decades ago.

With hatred rooted in real and perceived abuse and exploitation, he aimed to lure the West, specifically the United States, into a protracted and costly war of attrition on home soil, where devout jihadists would be motivated and readily available.

Bin Laden spoke of “bleeding America to the point of bankruptcy.”

By doing so, the son of a Saudi construction magnate believed he could engineer the moral and economic collapse of his enemies by bleeding them dry, both in human lives and treasure. The strategy is detailed in al-Qaida manuals and a 2004 al Jazeera broadcast in which bin Laden spoke of “bleeding America to the point of bankruptcy.”

Now a report by the Costs of War Project, released as U.S. involvement in Afghanistan drew to a close, tallies those costs, and the ledger bears some earth-shaking numbers.

While no country has declared bankruptcy as a result of the wars on terror, the economic costs as tallied by the Brown University endeavour are staggering: successive administrations in Washington alone have spent about US$6.4 trillion on overseas wars since three airliners hit the World Trade Center and Pentagon. 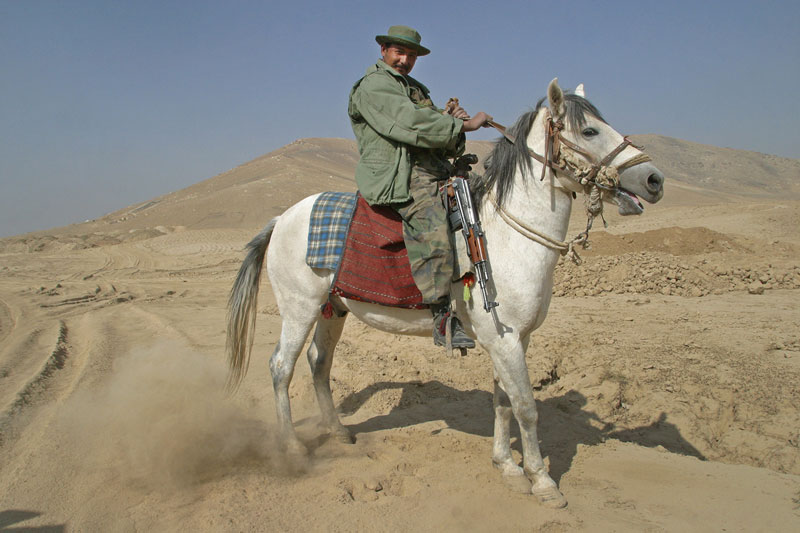 A mounted militia fighter stops to check out a 3RCR patrol south of Kabul on Nov. 3, 2003.
Stephen J. Thorne
While nearly 3,000 people died in those attacks and a thwarted fourth attack that ended in a farmer’s field in Pennsylvania, at least 801,000 have been killed in related overseas wars, said the report, assembled by Brown’s Watson Institute for International and Public Affairs in Providence, R.I.

“Many times more have died indirectly in these wars, due to ripple effects like malnutrition, damaged infrastructure, and environmental degradation,” said the report, a summary of investigations by a project team of 35 scholars, legal experts, human-rights advocates and physicians who began their work in 2011.

The tally of the dead includes 892 aid workers in a half-dozen countries, along with 680 journalists and other media workers.

9/11 was not an outlier; al-Qaida’s reach was long and game-changing. Its attacks dotted the globe.

As a result, some 37 million people have been displaced by subsequent wars in Afghanistan, Iraq, Pakistan, Syria, Yemen, Libya, the Philippines and Somalia, said the project. 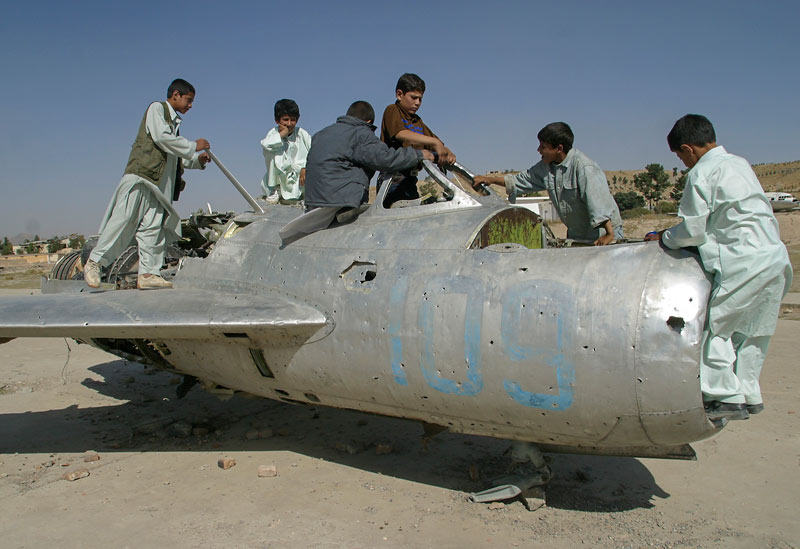 Children play on the remains of a Soviet MiG fighter jet in Kabul in October 2003.
Stephen J. Thorne
The U.S. government is conducting counterterror activities in 85 countries, vastly expanding the war across continents, it said. Its estimates do not include borrowing costs or veterans’ care, the latter to total $2.2 trillion over 30 years.

Bin Laden believed that all citizens of democracies like Canada and the U.S. bear responsibility for their government’s actions and are therefore fair game, whether military, political or otherwise.

Attention immediately turned to Afghanistan, where the perpetrators of history’s worst terrorist attack had been trained. It was the first time the NATO credo of collective defence—an attack on one being an attack on all—was instituted, and Canada didn’t hesitate. 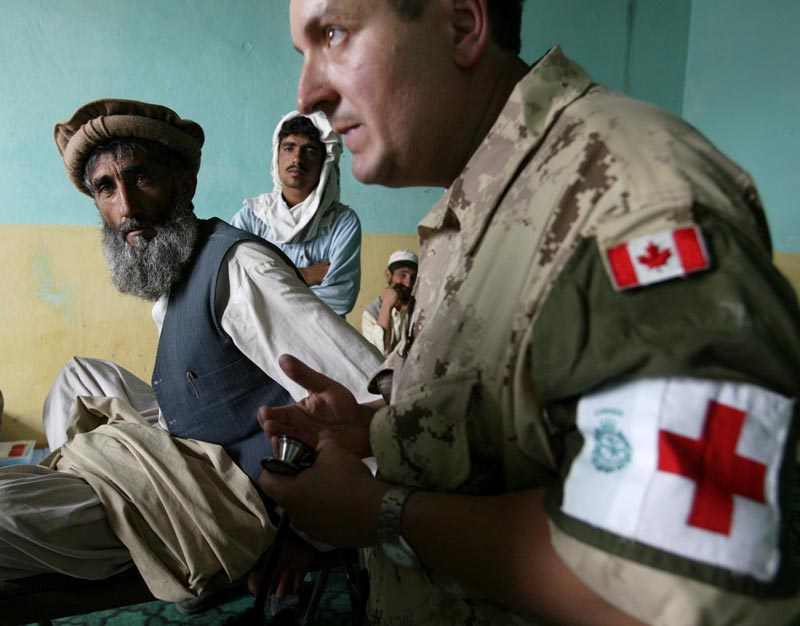 Capt. Americo Rodrigues, a doctor with the 3R22R Battle Group, conducts a clinic in the mountains northeast of Kabul on May 20, 2004.
Stephen J. Thorne
Joint Task Force 2 commandos were operating in-country by early December 2001 and, over the course of the next 12-plus years, some 40,000 Canadian troops served in Afghanistan. At least 158 were killed; thousands more were wounded.

In 2011, after Canadians stopped fighting and turned to training Afghan defence forces, the Rideau Institute reported that Ottawa had devoted C$92 billion to national security spending, over and above what it would have spent had budgets remained consistent with pre-9/11 levels—more than doubling its anticipated expenditure. 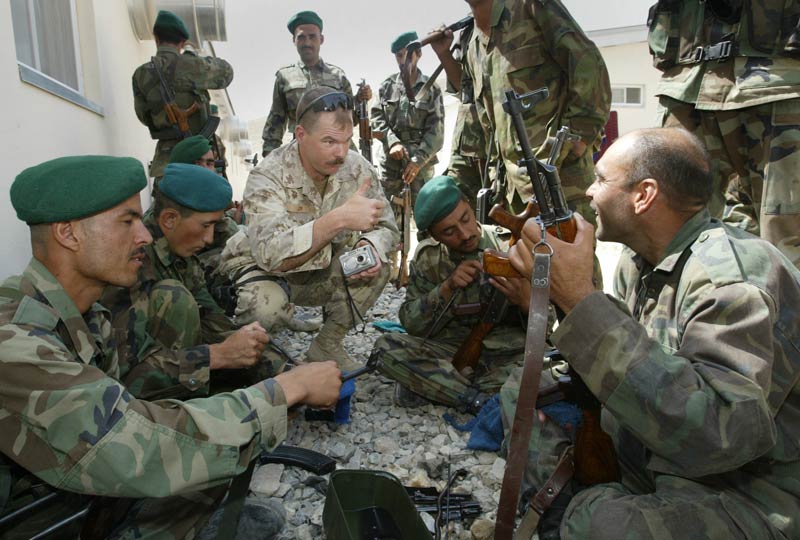 A Canadian trainer instructs Afghan National Army recruits in Kabul on Aug. 12, 2004.
STEPHEN J. THORNE/CP
The events affected Canada and others in ways that many in the West could not have imagined in 2001.

Canadian exports to the States declined, largely due to heightened border security. The ripple effects on the Canadian and American economies included shutdowns, job losses and interest rate increases.

“Data from the U.S. Department of Transportation shows the volume of passenger vehicles crossing into the U.S. never returned to its pre-2001 peak—it was still 27 per cent lower [in 2019] than in 2000,” Alexander Panetta wrote for the CBC.

And that was before the coronavirus pandemic shut down the border.

Canada instituted a raft of legislation, including the Anti-terrorism Act, the Public Safety Act, the Combating Terrorism Act and more. 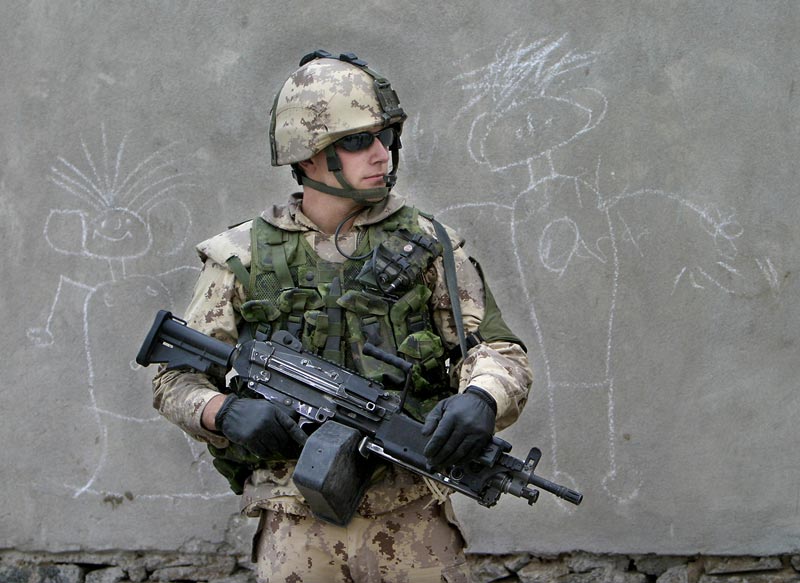 A member of the 3R22R Battle Group on patrol in Kabul on May 30, 2004.
Stephen J. Thorne
Democracy suffered as the shifting emphasis on security eroded civil liberties and human rights in North America and abroad, said the Costs of War. The measures have increased and intensified divides at home.

Right-wing extremism has grown in North America and Europe, where an influx of refugees from Afghanistan, Syria and elsewhere has fueled xenophobia. Hate crimes against Muslims increased around the world. Canada alone experienced a 16-fold rise in anti-Muslim attacks in the year following 9/11.

“America’s involvement in the War on Terror…resulted in a dramatic change in our nation’s attitudes and concerns about safety, vigilance and privacy,” journalist Matthew Green wrote in September 2020 for San Francisco public radio.

“It ushered in a new generation of policies like the USA Patriot Act, prioritizing national security and defense, often at the expense of civil liberties.

“These changes continue to have ripple effects across the globe, particularly in the Middle East, where American-led military operations helped foment rebellions and ongoing warfare throughout the region.” 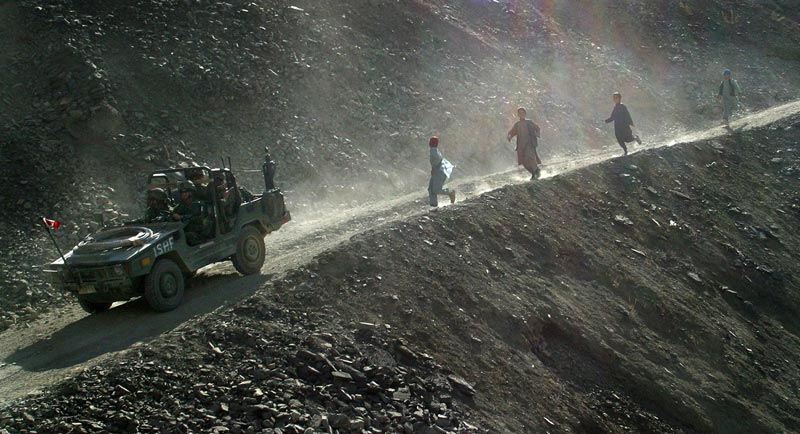 Afghan children chase an Iltis jeep loaded with Canadian paratroopers down a hillside outside of Kabul on Oct. 16, 2003.
Stephen J. Thorne
On the 15th anniversary of 9/11, journalist Terry Davidson wrote in the Toronto Sun that the attacks “changed everything.”

“From that point on,” wrote Davidson, “the everyday lives and daily comings and goings of Canadians, Americans, and people around the globe were forever altered by what one scholar calls a historical ‘game changer’ akin to that of the attack on Pearl Harbor.”

The expanding conflicts have given rise to discontent and new threats like those posed by the Islamic State, an avowed enemy of the Taliban which launched a deadly attack on the Kabul airport Aug. 26.

The West’s war in Afghanistan is over—for now, at least—but the war on terror, and its costs, continue to exact a toll

The story of a forgotten airplane Remembering the chaos of liberated Europe Deadly tech: the rapid advance of First World War weaponry The sinking of U-94

PrevPrevious ArticleThe graveyard of empires
Next ArticleAfghanistan goes to the TalibanNext