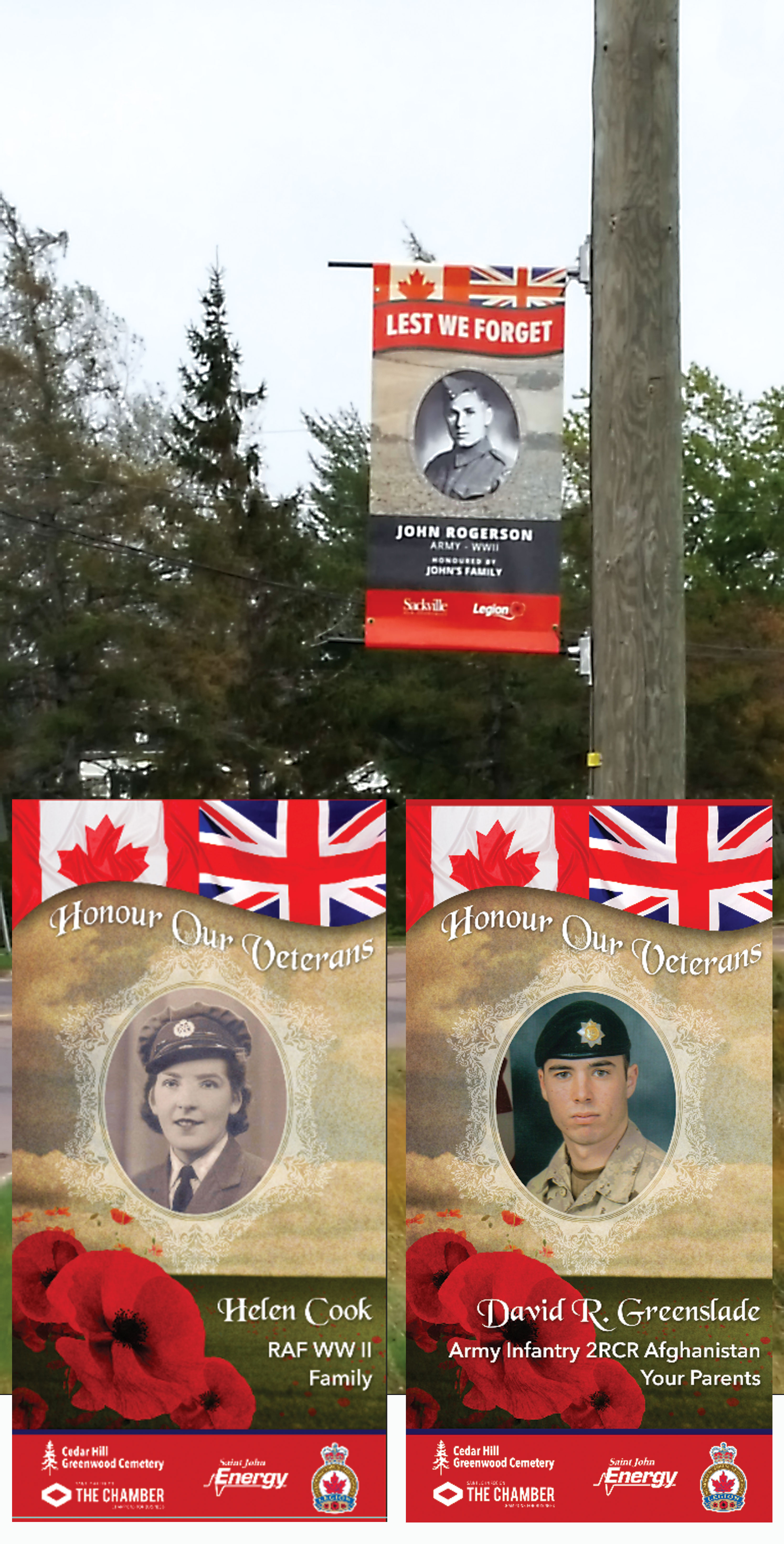 Since 2016, Sackville, N.B., Branch has found a special way to pay tribute to the town’s veterans. Inspired by what he saw in Saint John, N.B., Garth Zwicker decided to commemorate local veterans through a memorial banner project.

Zwicker’s father, a Korean War veteran, lives in a veterans’ facility in Saint John, where Lancaster Branch members visit and look after the residents. While visiting his father one day, Zwicker heard about a banner project organized by the branch. The banners, which are sponsored by veterans’ families, residents and businesses, commemorate local veterans and are hung along the main streets of the town in the weeks leading up to Remembrance Day.

“We went to the unveiling of the branch’s first banners and I was just blown away,” said Zwicker. “I thought there’s no reason in the world why we can’t do this in Sackville.”

Zwicker proposed the idea to his branch, which overwhelmingly supported it. He then approached the town council.

“[Sackville] jumped on the bandwagon right away,” said Zwicker. “They said we love what you’re doing, and not only that, but we will supply the hardware and hang them for you.”

Zwicker initially expected to put up 10 banners, but he received enough of a response to have 16 banners in 2016, followed by an additional 22 in 2017. The branch and the town now have a five-year plan to bring the total to 100 banners by 2020.

Sackville Branch is not the only branch to catch banner fever. It is uncertain where the idea originated, but Legion branches across Canada have begun to take on banner projects. “I’ve had some inquiries from Ontario and the western provinces,” said Zwicker.

Each branch runs the project somewhat differently, but the main elements remain the same. Banners are usually 0.6 metres wide by 1.2 metres high and cost from $150 to $250. They are installed sometime in September and usually remain until just after Remembrance Day. 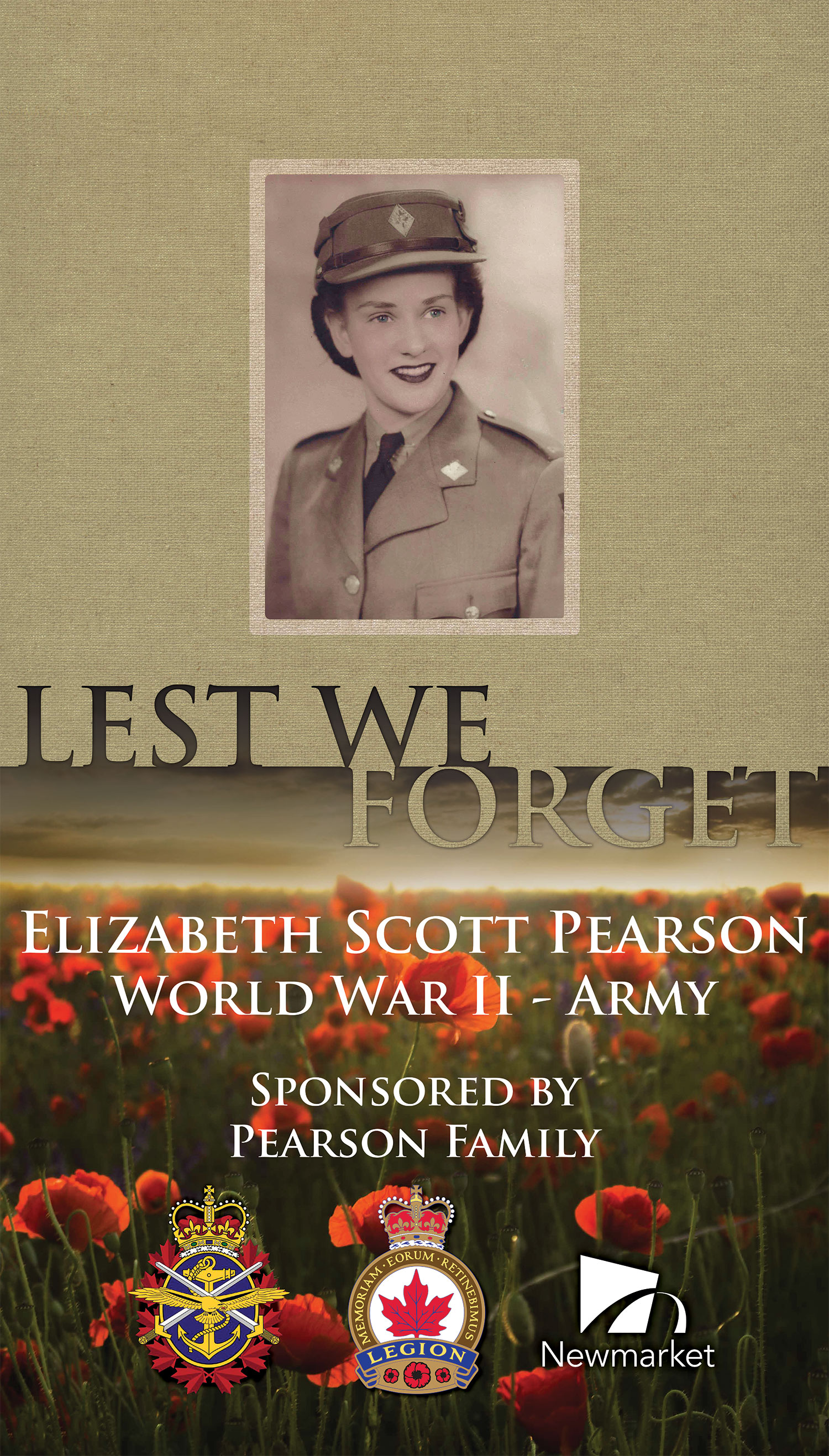 Each banner has a photo of a veteran, which is supplied by the sponsor, along with the units and dates of service, followed by the name of the sponsor. Some banners include the veteran’s rank.

For most banners, a graphic of the Maple Leaf and Union Jack flags appears at the top. The Union Jack was added because most of the veterans “would not have fought under the Canadian flag as we know it today,” said Zwicker.

Towns and businesses often assist the branches with the installation of the banners, using hydro poles and taking care of the paperwork associated with the program.

Milton Wesley Branch in Newmarket, Ont., began its banner program in 2017, said Crystal Cook, the branch’s banner co-ordinator. “The response from the public and the community has been overwhelming. We sold 28 [banners] the first year, and three more have come forward since Remembrance Day.”

Veterans from the First World War to Afghanistan appear on the banners, said Lancaster Branch President Larry Lynch, who has organized the project since 2015. Any veteran qualifies for a banner. “You don’t have to be deceased to be on a banner,” he added. “We also had RCMP officers: they’re veterans as well. 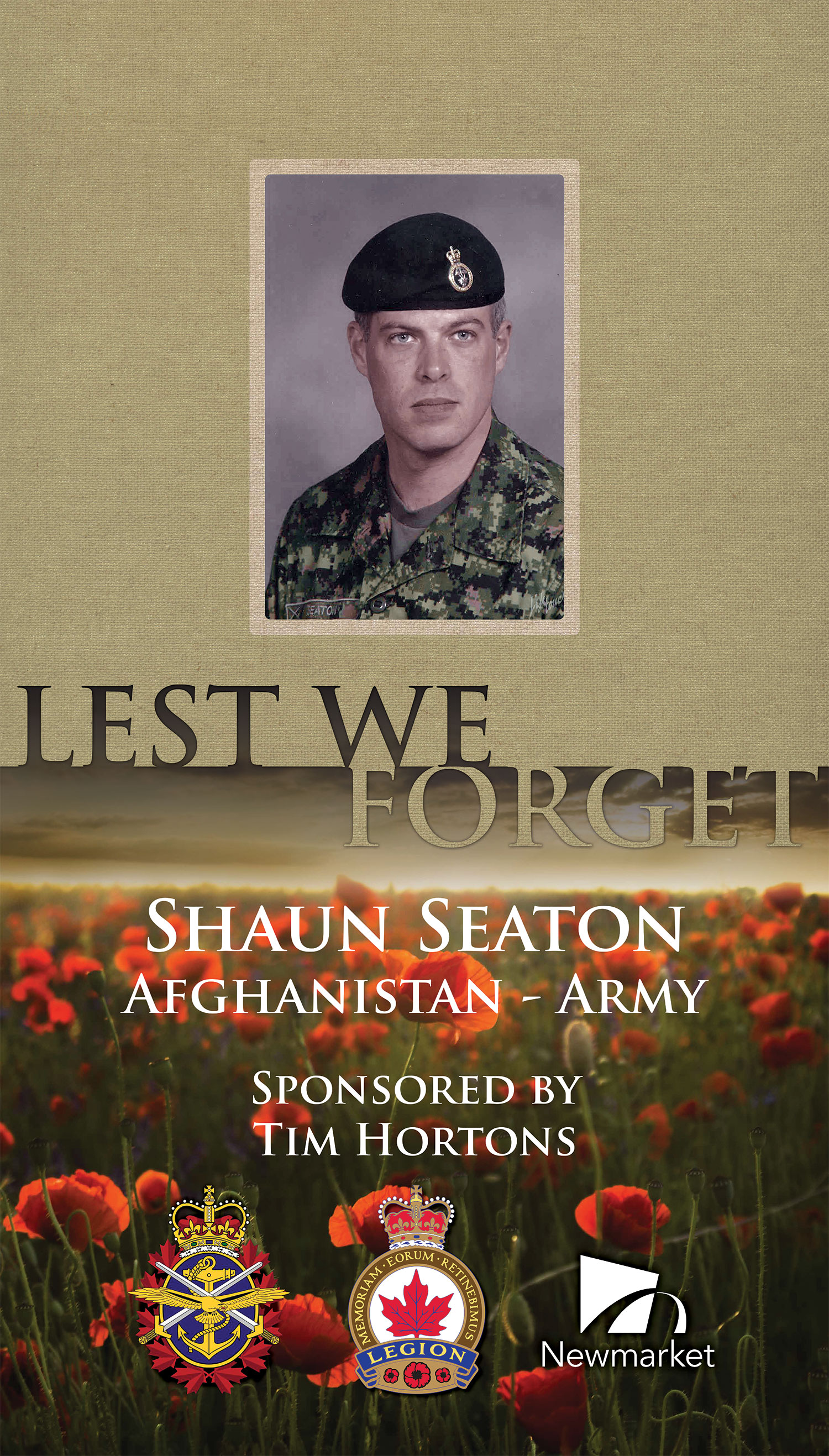 “The first year we put out a call, we ended up with 35 banners,” said Lynch. The project was so popular that a waiting list was needed. “So in 2016 we moved forward and added 58 banners…and in 2017 another 43 banners were added.”

The banners remain part of the program from two to five years, after which they are usually given as keepsakes to those who sponsored them. “If [the sponsors] want to have another one after that, we will start the process over again,” said Cook.

Town residents have been especially receptive to the project, said Cook. “People who didn’t normally frequent our main street were going down because they heard the banners were there.”

“Last year, [we had banners for] two citizens of Sackville who were captured on Christmas Day and became prisoners of war in the Second World War. We [also] had the brother of one of them on another banner,” said Zwicker. “These guys went to war…and then they came back and did a lot of things in their community. So there’s more than just their war service.

“I’d love to see the banner projects expand across the country,” said Zwicker.

PrevPrevious Article2018 Readership Survey: Our readers respond
Next ArticleChoose the next cover of Canada’s Ultimate Story!Next