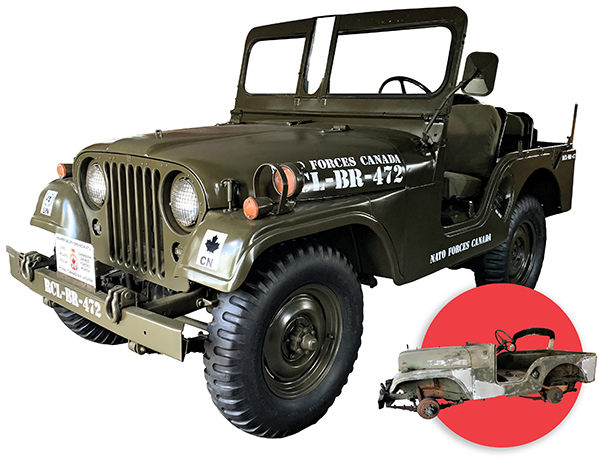 The Willys jeep was stripped and sanded (inset) before painstaking restoration returned it to its original beauty.
Jack Hume/Save the Jeep
The jeeps Canadian troops used in the Korean War were all-round workhorses.

The four-wheel-drive utility vehicles carried commanders, military police and signal corps dispatch riders, and were used as ambulances, for reconnaissance and for carrying light cargo. Waterproof electrical systems allowed them to cross shallow rivers even when their engines were submerged. They could be hoisted by a helicopter.

They towed anti-aircraft and anti-tank weapons and could be fitted with 106-millimetre recoilless rifles. In a pinch, their hoods stood in for desktops or dining tables.

The Willys M38 was succeeded by the M38-A1, one of which, after two years of painstaking restoration, is again on display outside Georges Vanier Branch of The Royal Canadian Legion in Hawkesbury, Ont.

Weathering with the seasons, its paint flaking, rust holes dotting the body, the canopy in tatters, the jeep had sat outside the branch for years. Jack Hume, now the branch’s first vice-president, volunteered to head its Save the Jeep restoration project.

The jeep saw duty at a base where troops were trained for service overseas, but it is the same model that was sent to the Korean War, said Hume, who spent about 200 hours restoring the vehicle in his home body shop.

Local businesses chipped in, one donating a windshield, others providing parts and materials at a discount. “It was almost scrap,” Hume told Legion Magazine. “Another couple of years and it would have been completely rusted out.”

It now looks practically new but although it has tires, it won’t be going anywhere—the power train was not touched. The jeep has resumed its watch outside the branch, an invaluable reminder of service long past.

“It means a lot to the Legion to have a military vehicle parked in front,” said Hume. 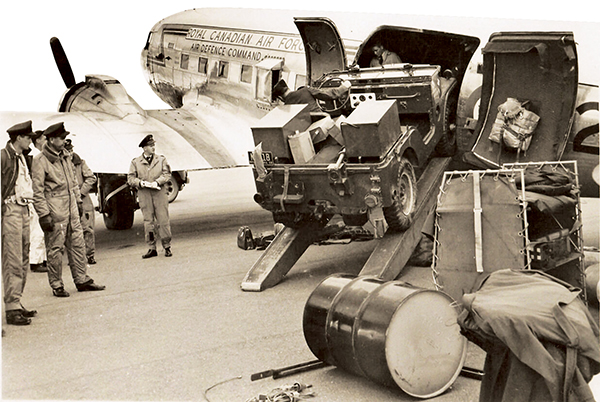 A Willys M38-A1 is loaded into an RCAF C-47 Dakota. The jeep was designed to be light enough to be lifted by a helicopter.
Comox Air Force Museum
In 2019, a restored Korean-era Willys Jeep sold for $67,000 at auction, but during the Korean War, one could be had pretty cheaply—with the right currency. Ron Bourgon asked an American engineering group for help with his jeep. They pronounced it dead and told him he’d have to hitchhike back to his unit. When he said he couldn’t do that, the American sergeant asked what he was carrying.

“I says, ‘Whisky.’ Is it possible to sell us a bottle? Well, I says, ‘Fix my jeep and I’ll give you a bottle.’” They fetched another jeep and painted Canadian numbers on it. “He gave me a brand new jeep for a bottle of Canadian Club.”