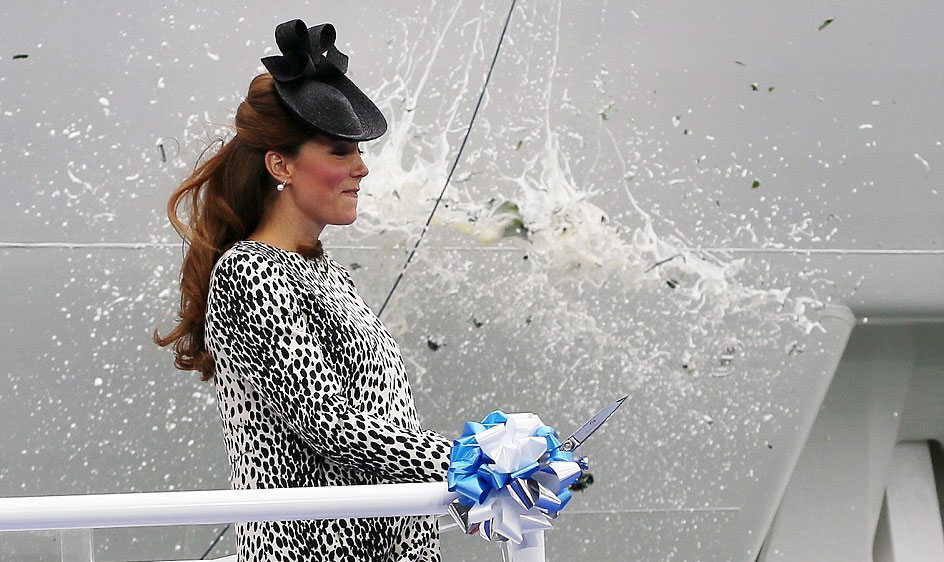 There was a bit of a row across the pond recently after the Scottish Maritime Museum decided to adopt gender-neutral signage for its vessels.

Museum director David Mann told The Guardian newspaper the decision to drop “she” for “it” when referencing ships was made after two signs were vandalized, presumably by folks opposed to the feminization of inanimate objects, a practice also applied to man’s other favourite toys: planes, trains and automobiles.

“The debate around gender and ships is wide-ranging, pitting tradition against the modern world,” Mann said. “But I think that we have to move with the times.”

Not so, the Royal Navy, which said it has no plans to abandon its longstanding tradition of referring to its ships as “she.”

Nor does the Royal Canadian Navy which, like its sister service, has no formal policy on the matter to abandon—only tradition, with which it intends to stick, said one officer, “until we are told otherwise.”

The closest one could come to formal navy policy on the issue is at commissioning, when what is most often a woman declares “God bless this ship, and all who sail in her” before smashing a bottle of cheap bubbly on her bow.

The tradition transcends the navy. Just last month, Princess Anne christened a new fishing trawler with the words “I name this ship Kirkella. And may God bless her and all who sail in her.”

The 285-year-old bible of international shipping, Lloyd’s List, “moved with the times” 17 years ago, abandoning centuries of seafaring tradition by announcing it would henceforth be calling all vessels “it.”

The now-weekly online journal, which describes itself as the world’s oldest continuously published newspaper, said at the time it was moving “into line with most other reputable international business titles.”

“The shipping industry does need to move forward if it is not to risk becoming a backwater of international business,” wrote Julian Bray, editor of what until six years ago was a daily print publication. “I decided that it was time to catch up with the rest of the world, and most other news organizations refer to ships as neutral.

“They are maritime real estate. The world moves on. I can see why ‘she’ would suit a magnificent cruise liner but to a rusting old hulk it could be rather offensive.”

Bray said he found nothing wrong with calling ships ‘she’ in conversation: “It’s a respectable maritime tradition.”

And the paper’s columnists were allowed to make their own determination according to their personal preference—which this old school writer seized upon in arguing for the right to shirk Legion Magazine’s ‘it’ policy for the purposes of this column. Successfully, I might add.

“Lloyd’s List can do what it wants,” a Royal Navy spokesperson said at the time. “The Royal Navy will continue to call its ships ‘she’ as we always have done. It’s historic and traditional. Ships have a soul.”

Said a spokesperson: “Our owners have always referred to them as ‘she’ and will continue to do so because, to many, they are part of the family.”

The man-o’-war notwithstanding, the tradition of calling ships ‘she’ dates from at least the 14th century, according to The Oxford English Dictionary. The reasons range from historical to, well, hysterical. 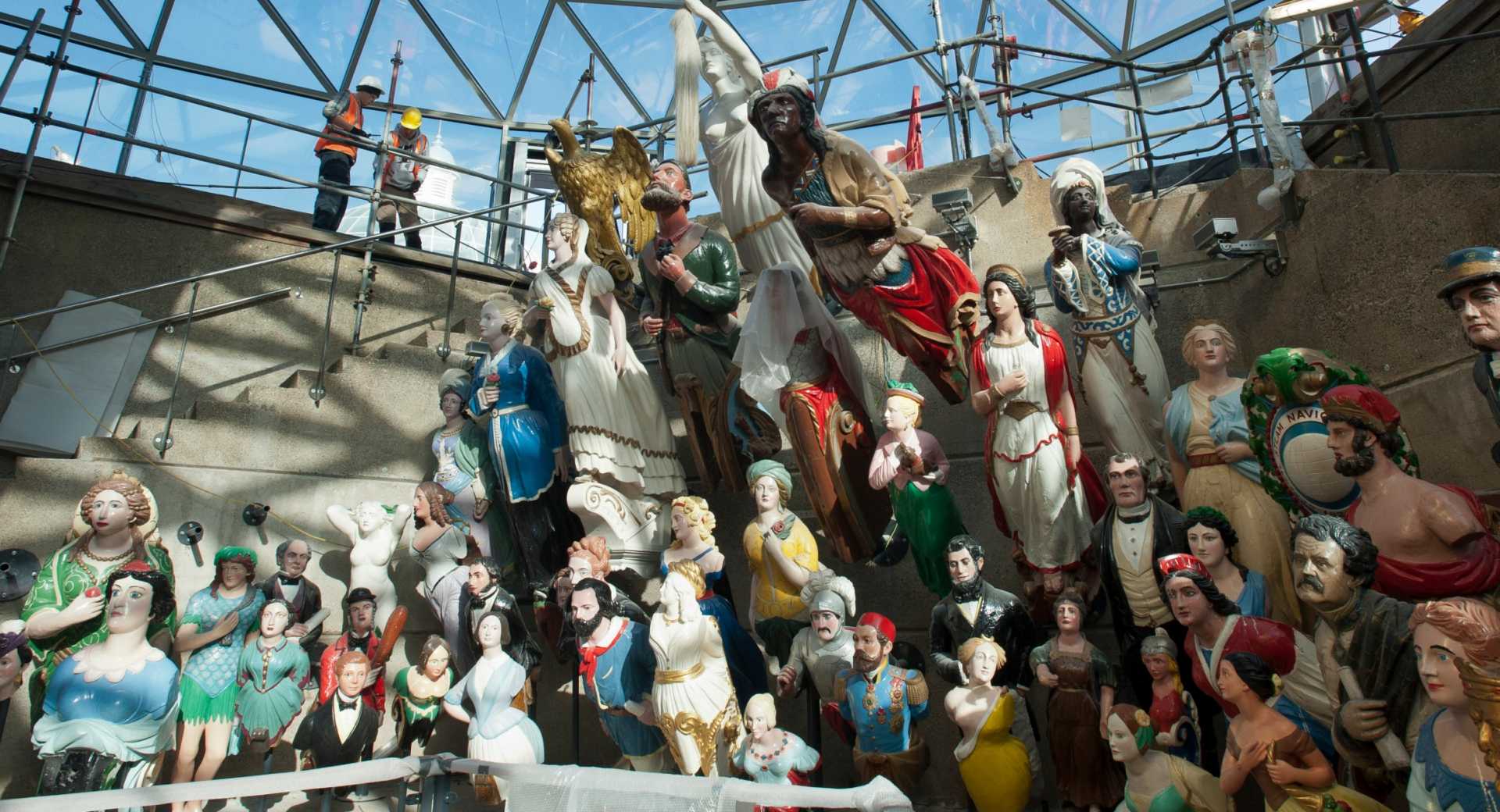 Ships’ figureheads in the collection of the National Maritime Museum at Greenwich, England. Most are female.
ROYAL MUSEUMS GREENWICH
Historically, the gender of the Latin word for ‘ship’ (navis) is feminine. Ships have always been regarded as motherly, womb-like, life-sustaining vessels, protecting and nurturing their crews through good times and bad.

Ships were once dedicated to goddesses and, later, to mortal women of note. Doing so bestowed a benevolent feminine spirit on them as they carried seafarers across treacherous seas.

Figureheads on the prows of ships often depicted female namesakes, denoting the ship’s moniker for the illiterates who made up maritime populations.

The simple and more romantic explanation for many is that assigning ships a feminine gender stems from the tradition of typically male boat-owners naming their vessels after the women in their lives—wives, sweethearts and mothers.

Then there’s the less serious.

For better or worse, the wardrooms of many a U.S. Navy vessel long carried a plaque declaring the following:

“A ship is called a she because there is always a great deal of bustle around her; there is usually a gang of men about; she has a waist and stays; it takes a lot of paint to keep her good-looking; it is not the initial expense that breaks you, it is the upkeep; she can be all decked out; it takes an experienced man to handle her correctly; and without a man at the helm, she is absolutely uncontrollable. She shows her topsides, hides her bottom and, when coming into port, always heads for the buoys.”

Retired American rear-admiral Francis D. Foley wrote in 1998 that men especially love a ship “if she is slim-waisted, well-stacked, and has an inviting superstructure.” 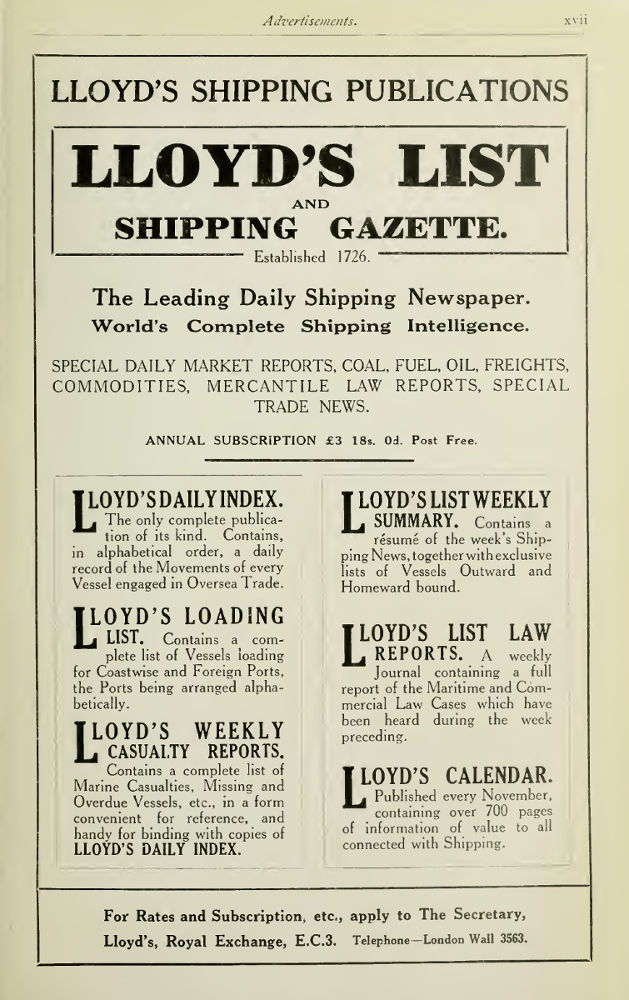 Lloyd’s List, here advertised in a period poster, is generally considered the oldest continuously published newspaper in the world. It stopped referencing ships as ‘she’ 17 years ago.

An aircraft carrier, he wrote, will “wave you off if she feels you are sinking too low or a little too high, day or night. She will not hangar around with duds, but will light you off and launch you into the wild blue yonder when you muster a full head of steam.”

Some ships “have a cute fantail, others are heavy in the stern, but all have double-bottoms which demand attention…

“If she does not remain on an even keel, let things ride, feel your way, and do not cross the line until you determine ‘weather’ the ‘do’ point is right for a prolonged blast. Get the feel of the helm, stay on the right ‘tact,’ keep her so, and she will pay off handsomely. If she is in the roaring forties, however, you may be in the dangerous semi-circle, so do not expect much ‘luff,’ especially under bare poles.”

The Chicago Manual of Style as well as the style guides for The Associated Press, The Canadian Press and the New York Times all recommend treating ships as neutral. Applying gender to inanimate objects is generally considered outdated or poetic in English and discouraged in official documents and the like.

Yet it persists and, while it may offend some, others such as Lissy Lovett, editor of the British-based online feminist magazine The F-Word, considers the debate a tempest in a teapot.

“At a time when transphobic rhetoric is being repeated in mainstream newspapers,” she said, “when people in Northern Ireland still don’t have access to safe, free abortions and when the majority of people living in poverty around the world are women, I just can’t see this as that big a deal.”

An award-winning journalist, editor and photographer. He has reported on the downfall of South African apartheid and from war fronts in Kosovo and Afghanistan.
All Posts
PrevPrevious ArticleA feather in your cap
Next ArticleFor whom the ship’s bell tollsNext