Co-operation may serve the aims of the two powers 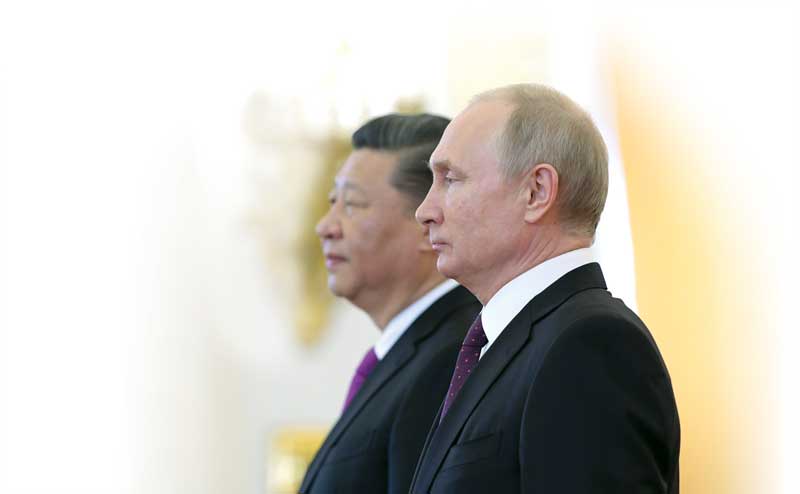 Yogi Berra, the late, great New York Yankees catcher who had a wonderful gift for malapropisms, had it right: “It’s tough to make predictions,” he once said, “especially about the future.”

Indeed it is, and not least about the world’s great powers and their intentions. Consider China and Russia, the primary antagonists of the democratic countries in the new cold war era. These superpowers have their own national interests, but also some common aims.

One of their key goals is to weaken the reigning superpower, the United States, and lessen its will and ability to project power. That’s a natural concern for Canada given our long-standing collaboration with the U.S. on defence and in supporting democracy around the world. Canada itself is no stranger to serious difficulties with the two countries, given recent efforts by Russia to conquer Ukraine and militarize the Arctic and major strains in Sino-Canadian diplomacy.

In undermining Western power, China is focused on regional supremacy and the strategic importance of Taiwan, southeast Asia and the Indo-Pacific. Russia, meanwhile, is worried about the strengthening relationships of eastern European nations and the European Union, and the possible
(if now very unlikely) expansion of NATO into Ukraine. The Russian invasion of Ukraine on Feb. 24 was allegedly to prevent that—and to stamp out the “Nazification” of the country.

But will China and Russia become genuine partners, collaborating in their diplomacy and war plans? At the Winter Olympics in Beijing in early February, presidents Xi Jinping and Vladimir Putin agreed to co-operate closely; their partnership had “no limits,” a communiqué stated.

The two powers share many attributes that should make them natural comrades: both are run by autocrats who have effectively made themselves rulers for life; both nations have similar systems of government, pervasive secret police presences, tight controls on freedom of speech and the internet, and a penchant for military and industrial espionage; their militaries have been conducting joint military exercises; they have interfered in the elections of their adversaries (the Chinese in the 2021 Canadian election, as they tried, with some success, to defeat some Conservative candidates of Chinese descent); and both are unduly persecuting minority Muslim populations—Russia having recently introduced laws outlining acceptable forms of Islam and China notably having detained more than one million Uyghurs in recent years.

Both countries have also increased the modernization of their militaries. Russia has been developing new hypersonic missiles and, after swallowing Crimea in 2014 and sponsoring separatist movements in eastern Ukraine’s Donbas region, invaded their neighbour. That invasion prompted Canada and its allies to send significant military aid to Kyiv. And, as noted, Moscow’s buildup of bases, airfields and missile installations in the Arctic are particularly concerning to Canada, not to mention the U.S. and Nordic nations.

China, meanwhile, has invested heavily in building a navy that is beginning to rival the U.S. In the last decade, its People’s Liberation Army Navy (PLAN) has added aircraft carriers, missile cruisers, submarines and fleets of smaller boats. The PLAN had 355 naval vessels—about 50 more than the U.S.—at the end of 2020 according to a recent U.S. Department of Defense report.

The Chinese have also militarized islands and shoals off the coast and those of their neighbours despite a ruling against its territorial claims in the region by the intergovernmental Permanent Court of Arbitration in The Hague. And it has increased military activity around Taiwan (which it claims as part of its territory), including fighter incursions into the country’s air defence zone.

Now China has a naval base in Djibouti in East Africa and is rumoured to be considering another on the Atlantic coast in Equatorial Guinea. It has also declared itself a near-Arctic power.

China and Russia, however, are not natural partners. Their interests don’t always mesh, and conflicts do emerge along their common border. The Soviets clashed with the Chinese in the northwestern region of Xinjiang, China, in 1934, and there were several months of combat in 1969 on the Ussuri River over territory claimed by both nations. Negotiations culminating in 2008 apparently resolved the territorial issues, but it’s fair to say that Beijing and Moscow both have long memories.

The economies of the two countries are also going in different directions. While China’s has continued to grow since the end of the Cold War, Russia’s has stagnated recently, becoming increasingly dependent on oil and gas exports, medium-term declining assets. The sweeping sanctions imposed by the West after the invasion of Ukraine further weakened the Russian economy and forced Moscow to look to China for help. The extent of that assistance is unclear, but Russia is undoubtedly increasingly dependent on China.

Still, it’s unlikely the two superpowers will forge a genuine military and political alliance. When Russia moved troops into Ukraine in February, China’s response was muted, denouncing the U.S. and NATO, but refraining from outward support of Putin. Chinese Foreign Ministry spokesperson Wang Wenbin said in late February that “all countries’ sovereignty and territorial integrity should be respected and upheld”—China insists Taiwan has always been part of its territory so its claims to the state are, it believes, justified. Russia’s attack on Ukraine, however, flies in the face of China’s line. Putin can’t have been pleased with this stance.

Thus, if China invades Taiwan and Beijing asks Moscow for support, Putin’s response might well be tepid. Russia wants Ukraine and China wants Taiwan, and both powers can use their vetoes at the United Nations Security Council to forestall any collective action against any military acts. That could be the extent of their co-operation.

Ultimately, China and Russia want to weaken American’s influence and interrupt the West’s will to defend democracy and oppose aggression. Let’s hope diplomacy is easier to predict than acts of war.

Enough ships? Afghanistan goes to the Taliban Our Turkish ally Defence on the cheap