“A good way to start off” 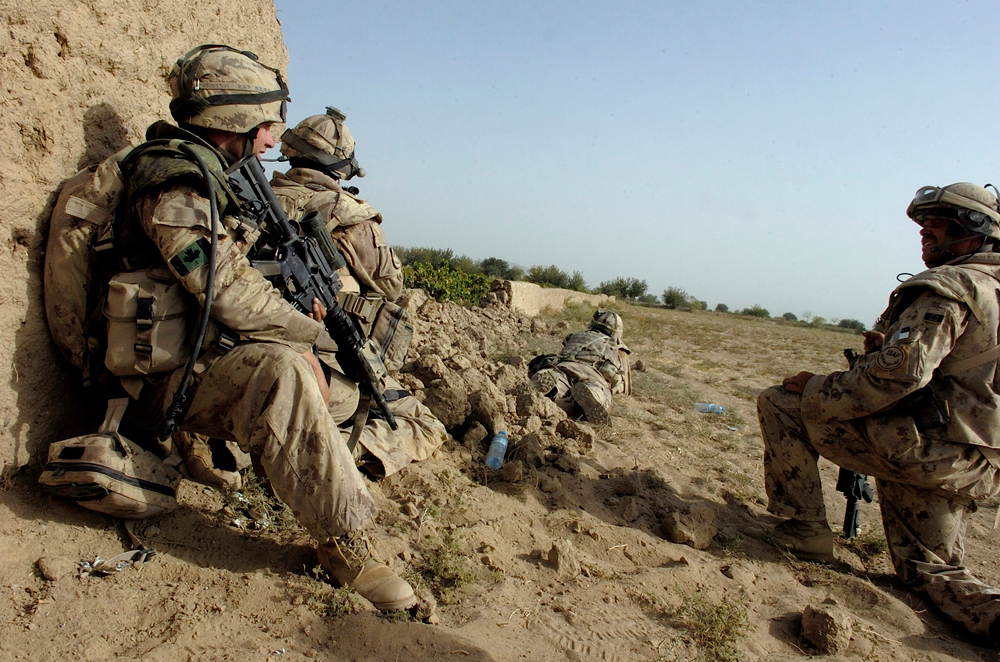 Members of the 1st Battalion, Royal Canadian Regiment, deployed in the second phase of Operation Athena in August 2006.
Combat Camera/AR2006-G007-0071
In Afghanistan in August 2006, the Taliban wanted to take back their spiritual home in a massive attack on the city of Kandahar, but their plans were disrupted by nearby troop movements around a Canadian change of command.

Shrapnel from a mortar shell peppered Lieutenant-Colonel Omer Lavoie’s vehicle during a familiarization tour near Masum Ghar, a peak about 30 kilometres from Kandahar.

On Aug. 19—Afghan Independence Day—Lavoie took command and set out to locate and eliminate the mortar that had been harassing Canadian troops and Afghan security forces. He sent Major Mike Wright, in command of five LAVs and an assortment of utility vehicles, to locate and neutralize the mortar on Masum Ghar.

“The Taliban, seeing our vehicles up on our hill and not liking the idea, decided to launch a fairly significant attack,” Lavoie said in the September 2007 issue of Legion Magazine.

He received a message that 300 to 500 insurgents were attacking. Masum Ghar was the prized high ground during a prolonged firefight.

“My LAV gunner was firing at a rock formation where we could see a guy skirting back and forth where the police had been,” said Wright in Murray Brewster’s The Savage War: The Untold Battles of Afghanistan. The gunner saw “Taliban in waves trying to get up to the top of Masum Ghar.”

“I heard a ‘whoosh.’ I looked up and I could actually see the RPG flying by,” Wright is quoted in In Their Own Words: Canadian Stories of Valour and Bravery from Afghanistan, 2001-2007. It was coming from an area that was supposed to be an Afghan police observation post.

Wright had expected only to be giving support to Afghan troops and police. Now he found himself in a firefight with a superior force of Taliban fighters. He sent Captain Mike Reekie’s LAV crew to cover the south. Reekie went farther than expected in order to see over a rise in the road, from where, said Wright “he was able to stop the main wave of the attack.”

“The Taliban were coming from our south and they were sweeping up the mountain on our flank, putting themselves in a position higher than our forces,” said Reekie. He moved to cut off their access up the mountain. “Yes, there were six of us and we would be put in greater danger. But there were 45 soldiers on the other side of the hill that would be in much greater danger.”

So his crew turned back to back, and began firing at the Taliban surrounding them. “We were in a situation where we were fighting 360 degrees…. I did not honestly think that we would come out of that situation alive and it was only due to the skill of our crew that we did.”

Hampered by an equipment malfunction, LAV driver Corporal Chad Chevrefils opened the hatch and stuck out his head, “exposing himself to fire to let the guys know who to aim for!” said Wright.

As the Canadians waited for the dawn, the Taliban melted away in the night.

“In the end we killed about 100 Taliban and took no friendly casualties, so it was a good way to start off,” said Lavoie.

Wright, Reekie and Chevrefils received the Medal of Military Valour.

The fighting after Hill 70 All for one: how unification shook up the military Homesick, seasick and lovesick Operation Moshtarak