A Fighter Pilot on Earth: General Tom Lawson Has The Controls 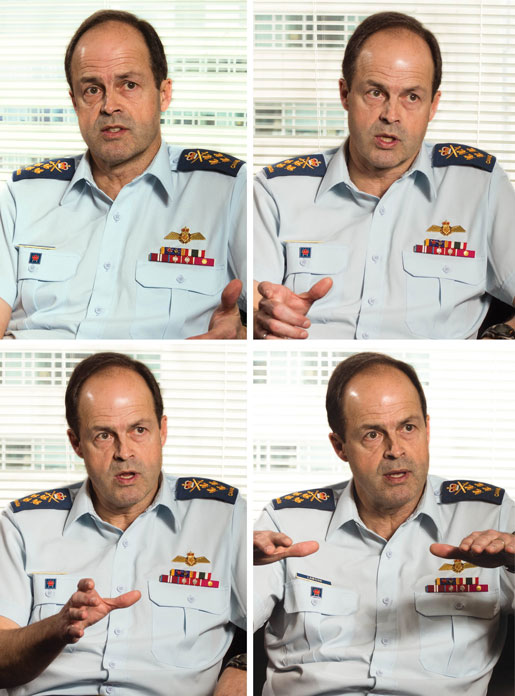 Around the nation’s capital, the new Chief of Defence Staff, General Tom Lawson, is considered a bit of an enigma.

He’s a fighter pilot who has learned to conceal the traditional fighter pilot swagger. He’s an officer who rose to the top of the military without ever being deployed to Afghanistan. He’s a man who came out of seemingly nowhere—he was a lieutenant-colonel when the Afghan war started—to take the helm of Canada’s armed forces.

In person at his corner office at the National Defence Headquarters highrise in downtown Ottawa, Lawson comes across as a calm, congenial man in his mid-fifties. With his reserved, almost lawyerly demeanour, Lawson breaks the mould for recent Canadian chiefs, exhibiting neither the bullish warrior presence of his predecessor Walter Natynczyk, nor the brassy tenacity of that most famous of Canadian generals, Rick Hillier.

Then what to make of the man? How to explain his rise to the top of Canada’s military?

Lawson’s most recent trial by fire was as spokesman for the successful mission to bomb Moammar Gadhafi from power in Libya. Before that, he flew CF-18s in Germany, taught electrical engineering at the Royal Military College in Kingston and was deputy commander at Norad in Colorado.

In discussion, it doesn’t take long for Lawson’s areas of expertise to reveal themselves. For example, if you were to ask him about the impact of the longest conflict in Canadian history, about what effect the Afghan mission had on the Canadian military, his answer would be: “You know, when we are in harm’s way we get really serious about what we do. The air force would say that the air force is always in harm’s way because the air force fights the elements—and we’ve lost more crews to bad weather and tough elements than we have to enemy fire since the Second World War. So the air force would say that they are, they have always been extremely serious about every mission because it presents similar levels of risk. That’s not the case with army, which has now trimmed everything they do in a way that is combat efficient. The army and the air force have fought so well together in Afghanistan that we’re going to be living off that experience and that doctrine for decades, and if we just move a little bit from Afghanistan and into Libya, the navy and the air force have been working very closely, too. So in combat in the last decade, I think what it served to do is it served to really develop our doctrine, nationally and internationally with our allies.”

That answer might actually reveal a lot about Lawson and how he came to be chief of the defence staff. Canada’s political leadership has been increasingly averse to pretty much anything Afghan-related and Lawson’s selection as chief came during a period where it seemed much of the top army brass was being selected for their distance from that conflict. While Lawson explicitly denies there has been a purge of Afghan-tainted military leaders, he does step forward to accept the heat personally on that score.

“I think what you can do is point to me and say that though I’ve been into Afghanistan several times,” he noted, “that I’m the guy who wasn’t in Afghanistan, but I’m surrounded by those who, and all the way down, many of our senior NCOs and troop leaders are of course well steeped in the doctrine that we pulled out of Afghanistan.”

On that note, Lawson is somewhat cagey on the subject of the Canadian legacy in Afghanistan, arguing it will take “decades” to know whether the mission was a success or not.

“No matter how you feel about the mission as a Canadian soldier, as a Canadian civilian, there is room for hope in a nation that had very little when this whole thing started 10 years and more ago. We see an Afghan national security force of number that are up to what we had aimed at in the mid-2000s, and we see Afghans leading 80 per cent of missions, we see Afghans actually taking on 80 per cent of their own training at this point, we see a government that has been advised on processes that are based in western experience, and we see women and children in schools that had never seen schools before. All of that is a little fragile, and I think that that in itself is testament to enormous effort, allied effort.”

To be sure, the war in Afghanistan, while fading from the public’s view, is still a very big deal in military circles. In the United States, being a general has not been so easy recently. Over the last decade, as the various conflicts in the Muslim world have smoldered and flared and persisted, there has been increased scrutiny of the military’s generalship and a strong new sense of their accountability.

In a widely cited article in the Armed Forces Journal, U.S. Lieutenant-Colonel Paul Yingling wrote of generals at war: “To prevail, generals must provide policymakers and the public with a correct estimation of strategic probabilities… If the policymaker desires ends for which the means he provides are insufficient, the general is responsible for advising the statesman of this incongruence. The statesman must then scale back the ends of policy or mobilize popular passions to provide greater means. If the general remains silent while the statesman commits a nation to war with insufficient means, he shares culpability for the results.”

The key issue, as Lawson is well aware, is that generals are under the control of their civilian masters, but yet cannot follow their wishes unquestioningly. Whether in war or during peacetime, a military leader must be willing to advise civilian leadership if, or when, their orders are unworkable.

“I think good generalship is good balance, cogent decision-making in the face of significant stresses,” said Lawson. “It’s largely made up of [different] sets of loyalties and challenges. And the overriding one, the compelling one, is loyalty upward. Everybody has a boss, and my boss is the government of Canada through the minister and the prime minister. And Canadians would want it that way. Every western nation wants their military to be well led and wants them to follow the wishes of the government. So that’s one part, we all understand our boss. Looking downwards, the part that’s really simple for military leaders is loyalty down to those who you look after, make sure that they understand the mission they’re about to go in, that they’re well trained for it, that they’re well supported during the mission, when they come back from the mission that they’re looked after.”

In Canada, now in relative peace, good generalship is about handling two vastly difficult issues, both related to the end of Canada’s Afghan war—operational stress injuries and a comprehensive budget crunch.

As to the issue of stress injuries, Lawson is candid: “I don’t think I could categorically say that we are ever doing enough but we have been seized of the issue for enough years now that we’ve done a lot to recognize the onset, the likelihood of onset of operational stress injuries, to lower the stigma. And we also recognize that members aren’t alone in this, the families suffer alongside these individuals. And so are we doing enough? I don’t know.”

Lawson then goes on to note that incidents of stress injuries are bound to rise in the coming years, as more and more veterans begin to feel the effects. However, “we won’t kick anyone out for an operational stress injury,” he said.

While this claim may be technically true, it’s not exactly correct in spirit. Many service members do end up being released for the drinking and behavioural problems that frequently accompany a stress injury.

Meanwhile, another pressing problem is the major reduction in funding for the military. As Lawson tells it, at the change of command ceremony Prime Minister Stephen Harper told him he would have to increase efficiencies while keeping the same number of personnel and not reducing readiness for conflict, wherever that may occur.

“We’re being cut in a way that will require us to do things differently,” said Lawson.” We see a balance across everything we do, the four pillars that hold up the whole thing: that’s personnel—we’ve been told not to cut that; equipment—we have to maintain all of our capabilities; infrastructure—we’ve got a lot of that, so we’re going to have to do some trimming there; and then readiness.

“So readiness is a very interesting thing, we’ve got to be very ready to protect Canadian interests, especially here in Canada, continentally, and then overseas as well. How do we keep that—the prime minister uses the term tooth to tail—how do we privilege that while keeping the pillars balanced? That requires us to be very careful about what we do.”

There will be no easy answers. In the end, Lawson himself is also, well, careful. One of the funnier moments of the interview concerned the troubled acquisition of new fighter jets for the air force. With the proposed F-35 not only way over budget, but also fraught with technical and performance difficulties, even formerly staunch supporters of the jet purchase are now being careful about their position.

Regardless of which fighter jet is eventually purchased, it seems Canada’s military is in the hands of a prudent and cautious steward. Certainly, it seems unlikely that Lawson will ever take bold public stands like former CDS Hillier. Time will tell whether that’s a good or bad thing.

PrevPrevious ArticleCollateral Damage: Families In The Wake Of War
Next ArticleEye On Defence: September/October 2013Next