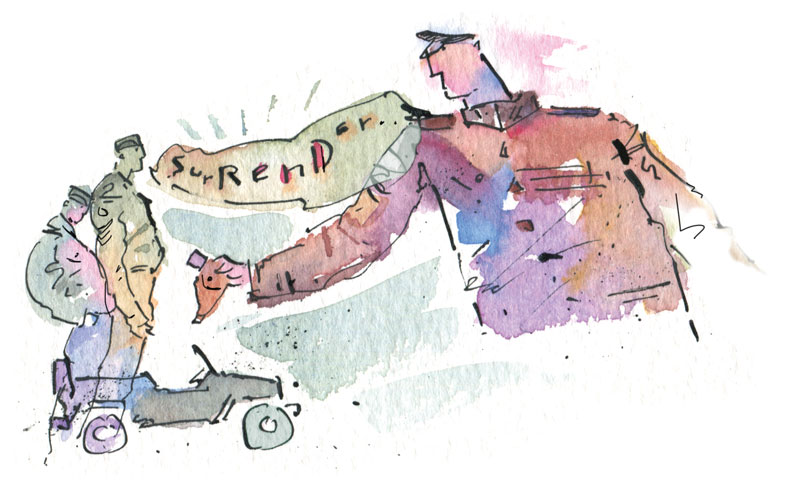 Kathy Beaupre of Geraldton, Ont., sent along a copy of an article published, probably in the 1960s, in the Fort William Daily Times Journal (long ago absorbed into the Thunder Bay Chronicle-Journal). The article recounts a wartime exploit of her uncle, Chris Walterson.

The column is attributed to an unidentified source, but it has the distinct flavour of a yarn passed on across the bar after a few beers.

Walterson was a sergeant with the Lake Superior Regiment in the last days of the Second World War. The regiment had helped spearhead a drive into northwestern Germany in early May 1945; on May 4, it was ordered to stop in place and be prepared to cease fire the next morning.

Chris decided to see what was going on and, with a Private Thompson as his driver, took a carrier (a small tracked utility vehicle) up the road toward the German lines.

The duo eventually rumbled into Wilhelmshaven, a port city that was home to much of what was left of the German navy. The Canadians were soon surrounded by German soldiers, who demanded to know their business. Chris decided to bluff it out and explained that they had come to accept the surrender of the northern German army. It was clearly a time of confusion, fear and uncertainty for the German military. Hitler was dead, the Russians had occupied the eastern half of the country and the western allies were obviously on the doorstep. The local garrison commander, a general, had clearly had enough. He unbuckled his gun belt and handed his pistol to Chris.

Walterson and Thompson headed back to camp, with the general following in his staff car. Their arrival caused consternation and prompted a volley of signals up and down the chain of command. The upshot was that senior officers were preparing to receive surrenders and had no intention of having their thunder stolen by a sergeant. The general was to be sent back, with suitable apologies, to await the morning. The powers that be, unmollified by the catch-and-release of the general, ordered that Walterson be reduced to private for ignoring the stop order. Regiment duly sent a signal to division recording the loss of his stripes. A second order (which did not go to division) made him a sergeant again.

Kathy Beaupre says the story fits her uncle’s character to a T.

“The quartermaster provided him with enough Scotch whisky for an entire company.”

Scrounging has been a valued talent in the military since the days when Centurion Publius sent Legionary Marcus to find better wine than the issue stuff. A soldier who can go off and rustle up anything from gasoline to a kitchen stove, no questions asked, is an asset to any outfit.

Perhaps the best scrounger I ever knew, though, was a civilian: a lanky, bearded fellow named Bill Boss. He was a legendary war correspondent for The Canadian Press in the Second World War and Korea. The latter conflict was where Boss pulled off his greatest caper.

He landed at Busan, South Korea, with Princess Patricia’s Canadian Light Infantry, but he wanted to be free to go where he wanted, without military supervision. For that, he needed wheels. He pondered the problem and BANG; the light bulb went off.

He went to the quartermaster and said he needed enough Scotch for “the CP.” He failed to specify that it was The Canadian Press—not the command post—that wanted the booze.

The quartermaster provided him with enough Scotch whisky for an entire company, or about 120 men. Boss then embarked on a marathon scrounge, much of it at the expense of alcohol-starved American units. He traded scotch for a tent, a generator, a trailer and a jeep, which was immortalized in wire service lore as “The CP Jeep.”

During the Second World War, Boss did a stint in the army as a public relations officer. He was extracted from the military by Gillis Purcell, the equally legendary head of CP. Purcell never explained what strings he pulled to make Boss a civvy and a CP correspondent. Boss himself never knew—or never told, at least.

Boss used to say that first thing he did upon leaving the military was grow a beard.

Some rules for NCOs:

2. Make sure there is extra ammo and coffee.

4. Count all the other ranks twice.

5.Do not listen to officers. They can get you killed.

Thoughts from Rudyard Kipling, who knew and admired soldiers:

“In times of war and not before, God and the soldier we adore.

But in times of peace and all things righted, God is forgotten and the soldier slighted.”