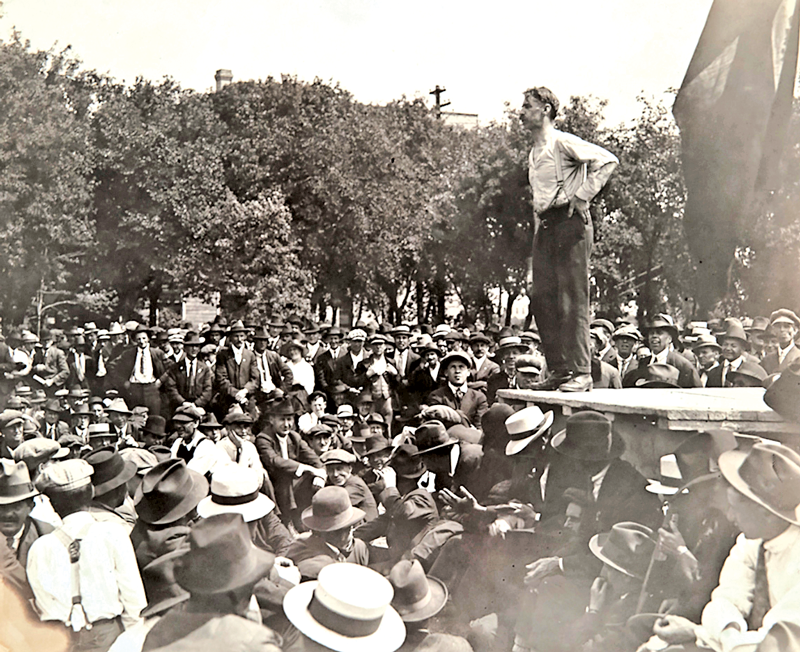 The largest strike in Canadian history started with metal and building workers seeking better wages and working conditions. Labourers had been pushing for similar changes for decades at that point, and the First World War helped bring these demands to the forefront.

Soldiers returned to find jobs scarce, wages low, housing in short supply and rents exorbitant. Meanwhile, many businesses—manufacturers in particular—had profited from the war. Men returned wounded or traumatized and found the better world they had fought for hadn’t materialized on the home front.

“In Germany I fed on grass and rats,” one veteran wrote in Winnipeg’s Western Labor News. “I would prefer going back to eating grass than give up the freedom for which I fought so hard and suffered so much.”

Some 30,000 Winnipeggers joined a general strike on May 15, 1919. The city ground to a virtual standstill as workers from a wide range of occupations all walked off their jobs.

They were condemned as revolutionists, “alien scum” and Bolsheviks by the government and business leaders. James Woodsworth, a Winnipeg preacher, defended the strike. “These men did their fair share,” he said. “Now the rich should pay theirs!”

The workers formed a Central Strike Committee. But those in charge refused to meet with them. Instead, Parliament quickly amended the Immigration Act so that foreign-born strikers—even the British—could be deported. The country that many of the protesters had fought for was turning on them.

Not all veterans, however, were in favour of the strike. Some felt that foreign-born
workers were taking the jobs of returning vets. The country had come together for the war effort and now fresh divisions were emerging.

Men who had fought alongside one another only a year earlier were now on opposite sides.

Tensions continued to mount, culminating in “Bloody Saturday” on June 21. A crowd of about 6,000 strikers marched to Winnipeg’s city hall. Then-mayor Charles Gray read them the Riot Act to little avail.

The Royal North-West Mounted Police were waiting nearby. They were joined by a special militia that had been formed to replace striking policemen. Many of the “specials” were veterans, as were many of the strikers. Men who had fought alongside one another only a year earlier were now on opposite sides.

After the strikers set a streetcar on fire, the Mounties, revolvers drawn, charged down Main Street into the mass of protesters. The specials joined the police, patrolling the streets with clubs in hand. At the end of the clashes, two strikers were dead, dozens wounded and 94 were arrested. Workers returned to their jobs five days later. The Winnipeg General Strike was over.

Woodsworth was charged with seditious libel, though the case was later dropped. He and other labour organizers formed the Co-operative Commonwealth Federation, a socialist political group that evolved into the New Democratic Party in 1932. Woodsworth was elected to Parliament in 1921 and continued to fight for employee rights as an MP until his death in 1942.

While the strike was convincingly crushed, it paved the way for labour reform, and served to unite workers across the country.