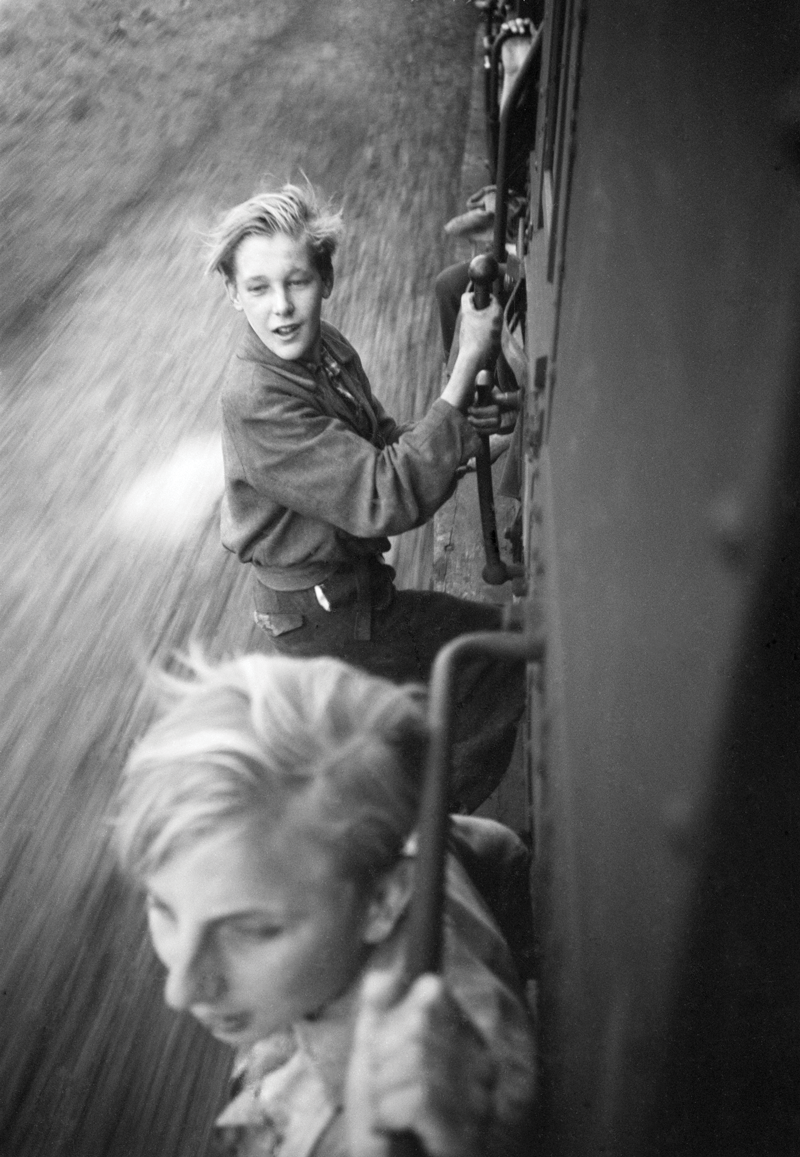 Feted with parades and banquets, flowers and wine, the Canadian liberation of the Netherlands was a joyous time—though not far from the shadow of war

Beginning in September 1944, Canadian troops fought their way across the Netherlands, canal by canal, village by village, to end a brutal five-year occupation by the forces of Nazi Germany. By April 1945, weeks before the war in Europe was over, the country had been liberated.

More than 7,600 Canadian soldiers were killed during the eight-month campaign, but the cause was just: nearly 206,000 Dutch men, women and children had died of war-related causes. They included three-quarters of the Dutch Jewish population—over 100,000 people—who had been murdered in Nazi concentration and extermination camps. It was the Holocaust’s highest toll in Western Europe.

About 20,000 Dutch citizens starved to death and many more suffered bitterly during the “Hunger Winter” of 1944-45, a famine caused by a German-imposed embargo and compounded by priorities given to Wehrmacht food supply. 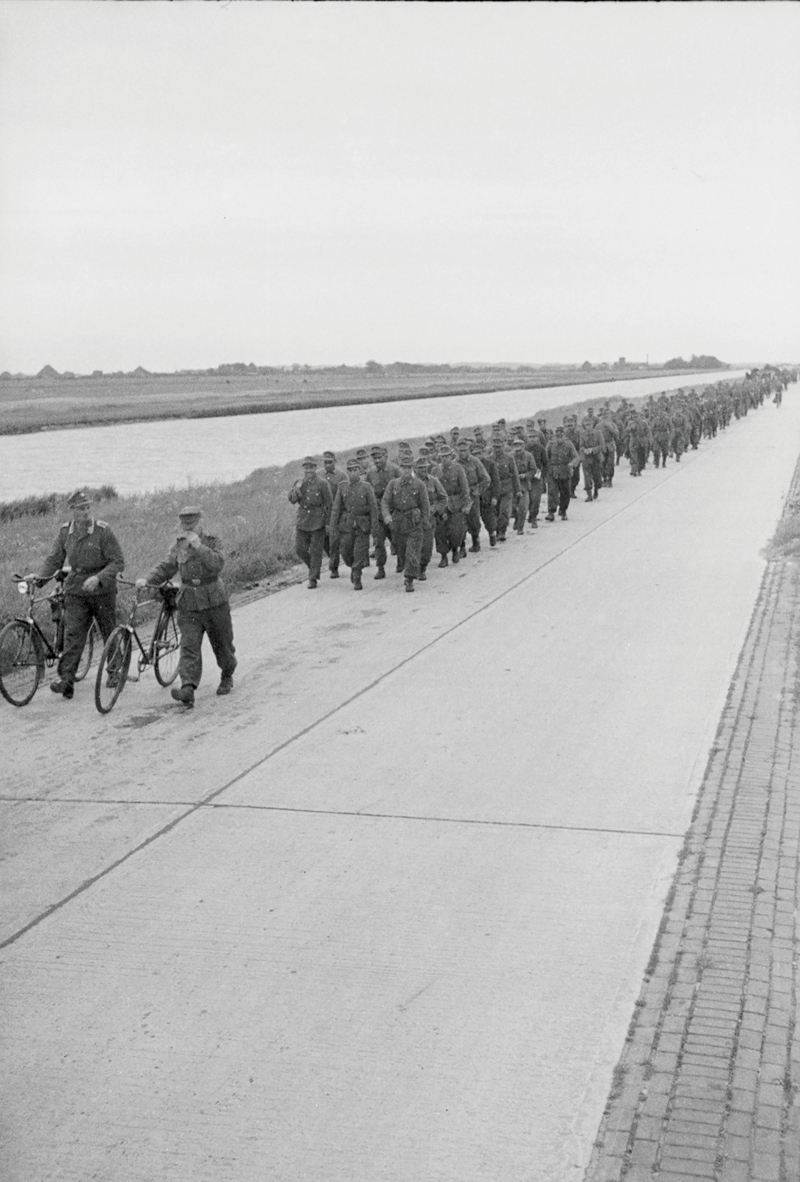 Defeated German troops march out of the Netherlands in May 1945.
Holocaust and Genocide Studies/217015/Wikimedia; Kryn Taconis/LAC/3239063

The liberators brought with them food relief—and freedom. They were feted with parades and banquets, flowers, wine and jenever, a juniper-flavored gin considered the Netherlands’ traditional drink.

But behind the smiling faces and joyous photographs were a grateful people tired and hurting. The ravages of war had exacted a toll. Homes had been destroyed; businesses and industry wiped out; survivors lost friends and family members, neighbours and colleagues. In some cases, Dutch had turned against Dutch in their quest to live.

As in France and elsewhere in Europe, informants and enemy collaborators were treated harshly. Liberating forces turned a blind eye as partisans beat and executed traitors. Locals tarred and shaved the heads of women who had fraternized with occupation troops.

The liberation and the wartime sanctuary Canada provided to members of the Dutch royal family forged a lasting friendship between the two countries, marked by annual pilgrimages, flower ceremonies at war graves tended by Dutch schoolchildren and Ottawa’s annual Canadian Tulip Festival, its spring blossoms a reminder of the hope and promise of that “Canadian summer” of 1945. 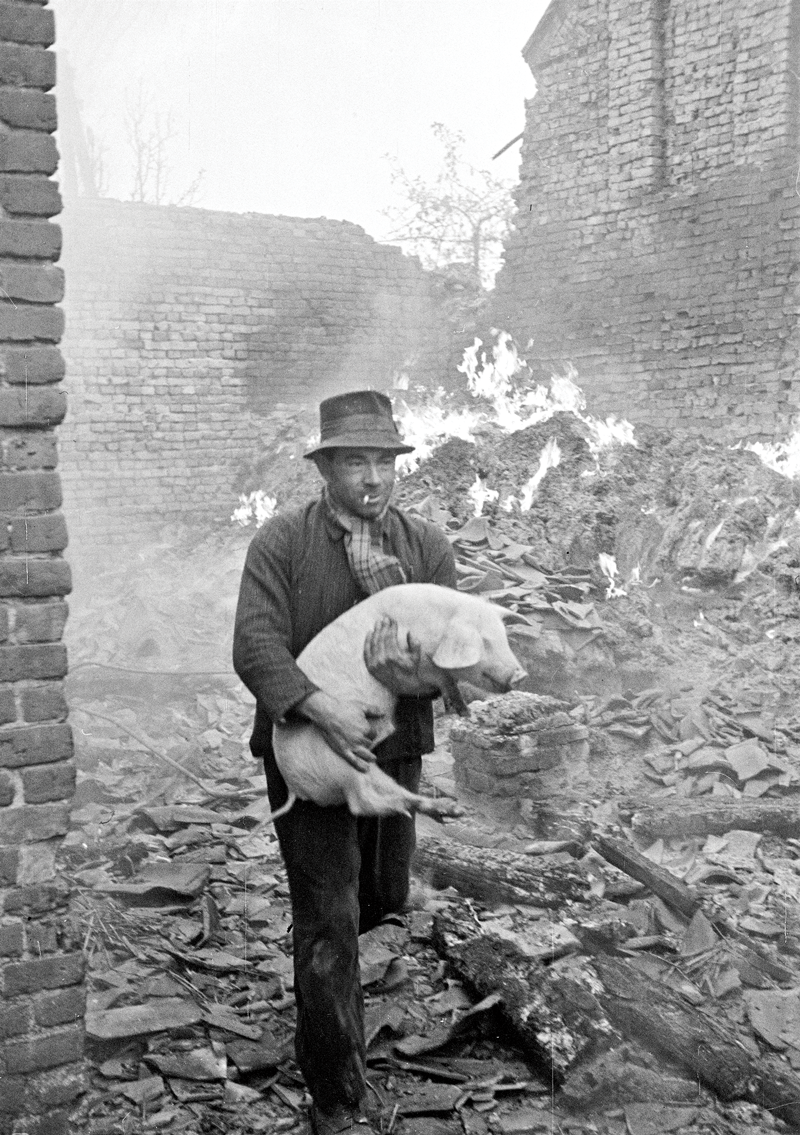 A Dutch farmer rescues a pig from a burning farmhouse in January 1945.
Sgt. Bert Hardy/No. 2 Army Film and Photo Section/IWM/BU1565 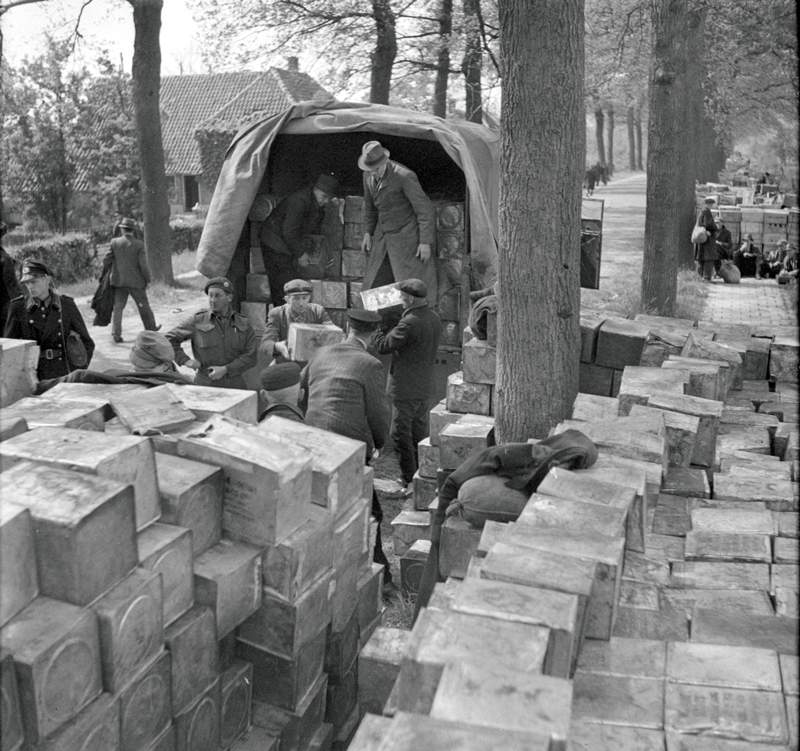 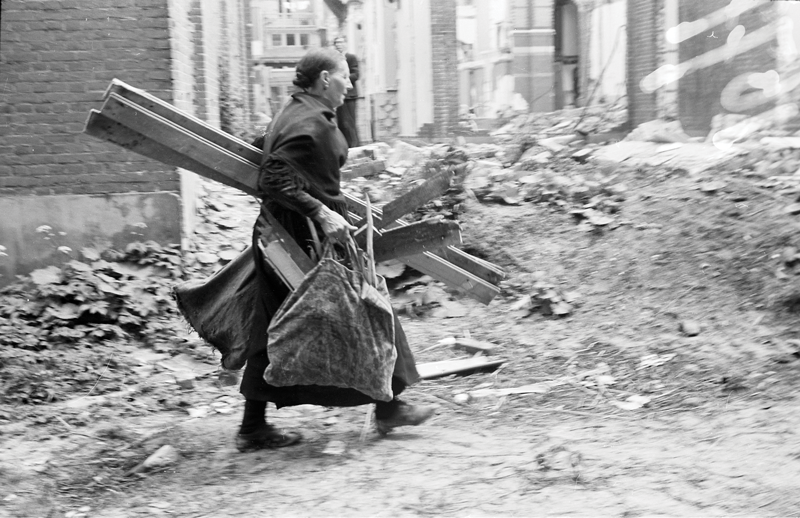 A woman carries firewood from a destroyed building in The Hague in 1944
Menno Huizinga/Ondergedoken
Camera/NIOD Institute for War, Holocaust and Genocide Studies/216913/Wikimedia 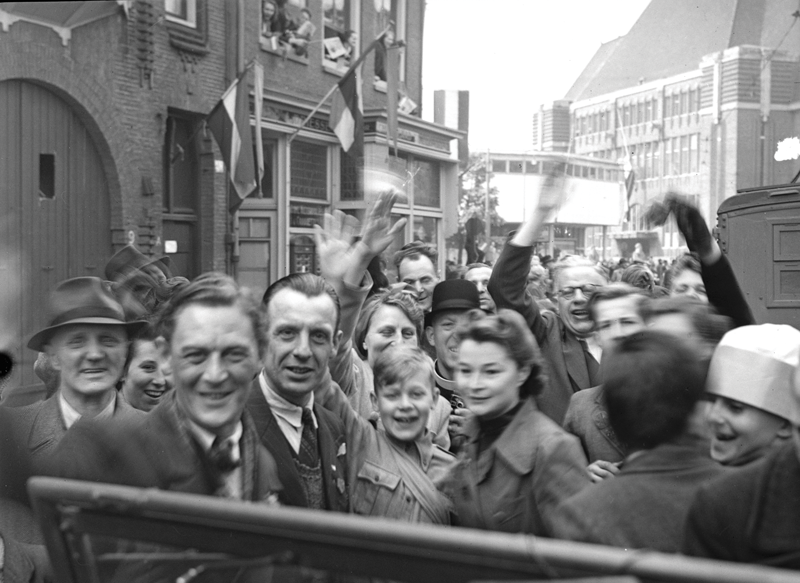 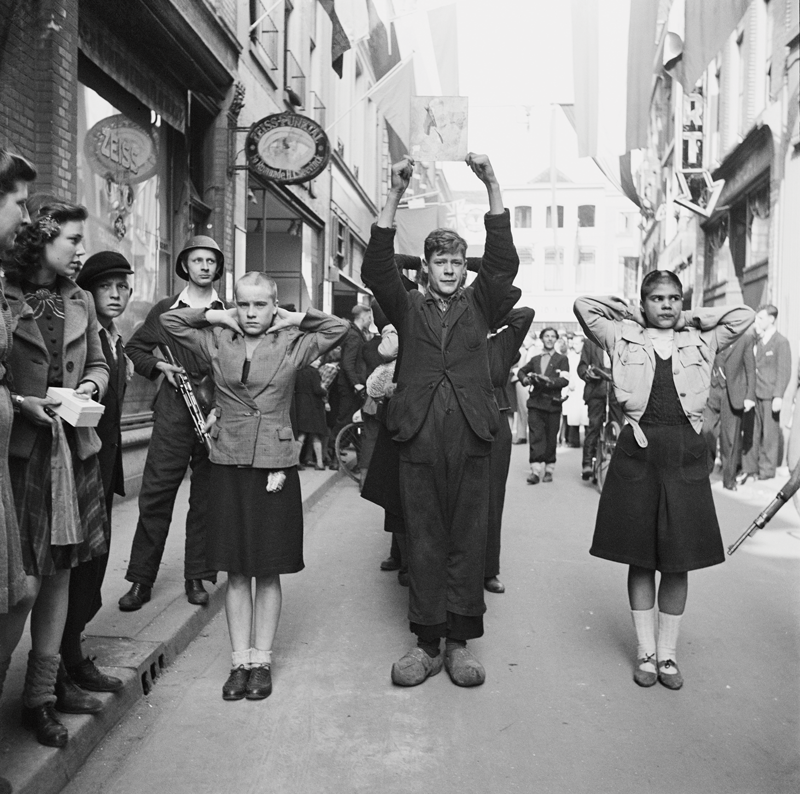 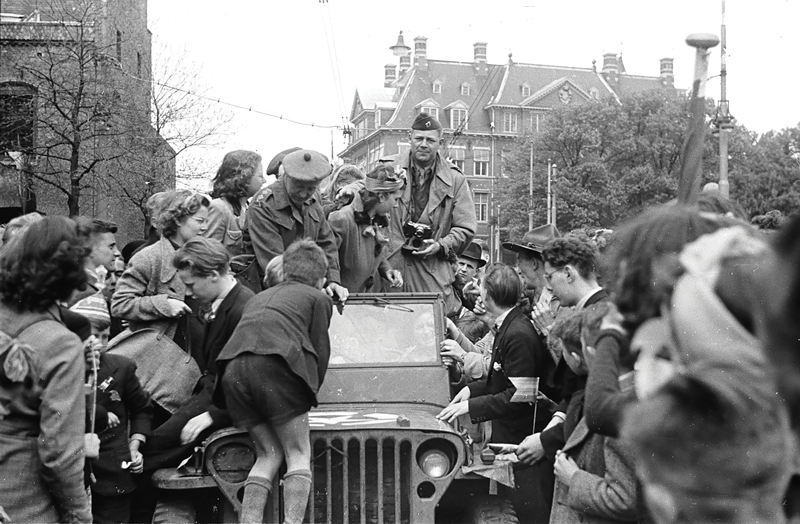 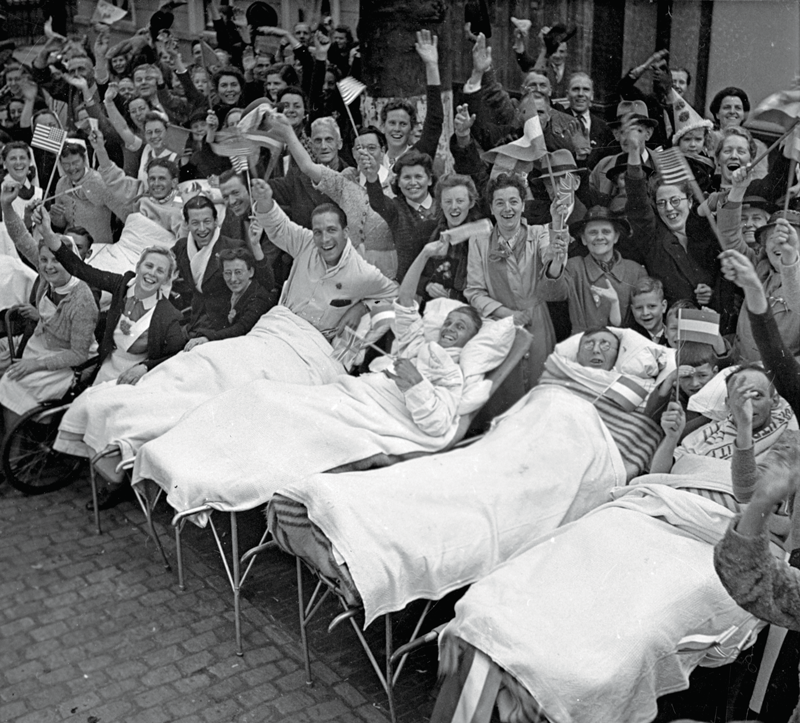 Joyous Dutch, including nurses and hospital patients, celebrate in the streets of Utrecht
LAC/51662-2 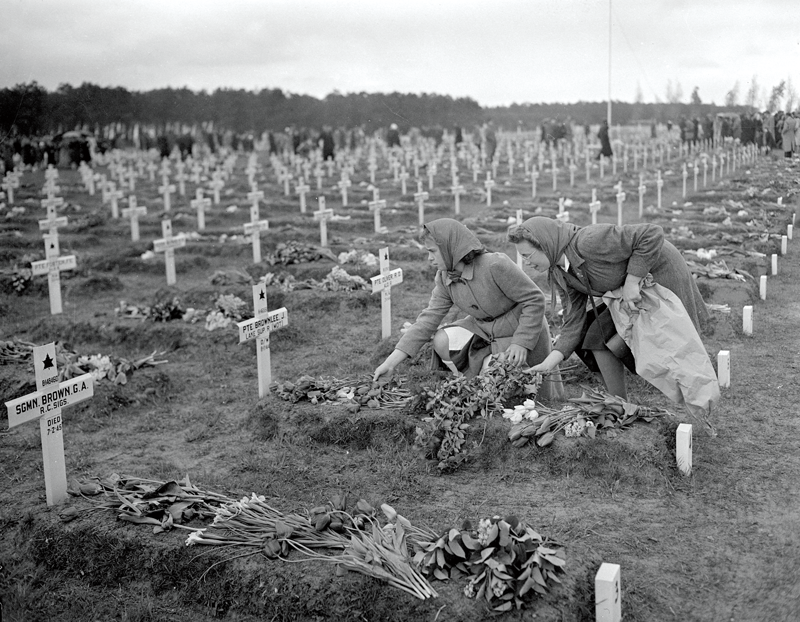 PrevPrevious ArticleFlight of Pathfinders
Next ArticleHMCS Uganda: the ship that voted its way homeNext