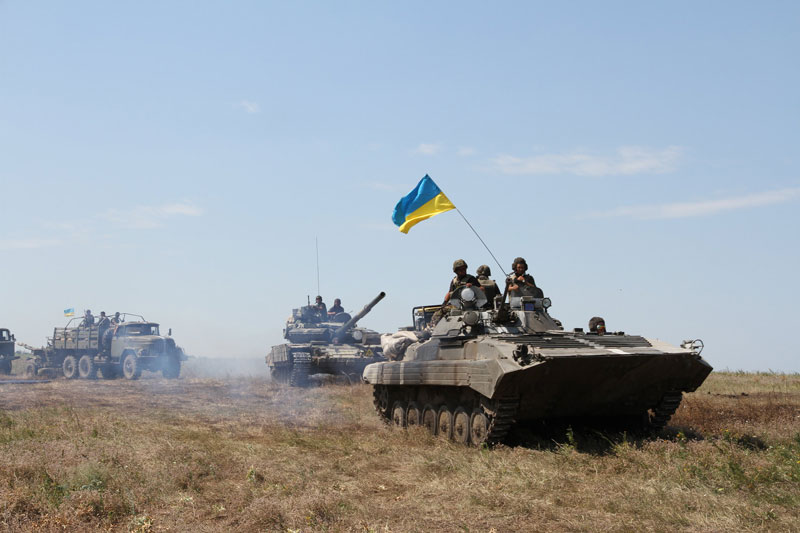 Ukrainian armoured troops on operations.
Ministry of Defense of Ukraine/flicker.com

Corporal Brian Tite, a Canadian signals specialist, served two tours training Ukrainian soldiers in the kind of technologies that are now contributing to their stout defence against invading forces from Russia.

The International Peacekeeping and Security Centre near the western city of Lviv was his home and office for more than a year in 2019 and 2021. It was destroyed March 13 by Russian cruise missiles; 35 people were killed and 134 wounded.

“It’s very sad because we probably knew some friends who were still working there,” Tite said in an interview with Legion Magazine. “We hope everybody’s OK over there but, yes, the base we were working on…was hit.”

Ottawa pulled about 260 Canadian troops out of Ukraine less than two weeks before Russian forces invaded on Feb. 24. The decision came after Britain and the United States ordered their own soldiers out, effectively suspending Operation Unifier, a training mission begun in 2015 after Russia annexed Crimea. 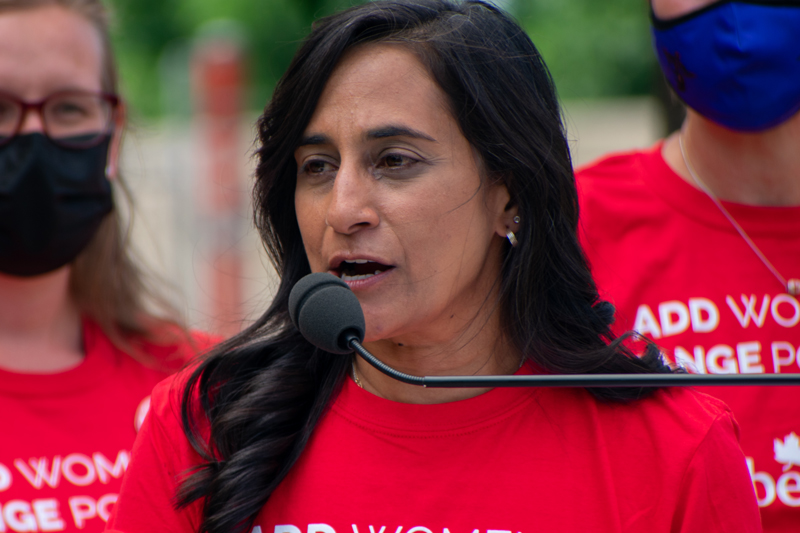 Defence Minister Anita Anand says Canadian troops are currently in a third country training Ukrainian soldiers on howitzers Canada has contributed to their defence against the Russian invasion.
Wikimedia
The $890-million project trained more than 30,000 Ukrainian defence and security personnel at the centre in Yavoriv, near the Polish border about 50 kilometres west of Lviv, and in a dozen other locations throughout the country.

In a tweet, Defence Minister Anita Anand described the withdrawal as a “temporary measure.” A Defence Department statement suggested the decision did not signal the end of the commitment.

“Force protection is the top priority for our training mission, of which operational security is a key component,” it said. “Thus, while we can confirm we have relocated some of our forces outside of Ukraine, we will not discuss numbers, locations or future intentions.”

Tite, 24, a native of Lachute, Que., spent his days around computers. He ate and slept at the centre where he worked and occasionally ventured into the city by chartered bus along with American, British and Swedish colleagues and their Ukrainian trainees. They also played football and Frisbee during off-hours.

[Putin] claimed the West was “preparing for the invasion of our land, including Crimea.”

He said the Ukrainians were engaged, quick learners. “Right now, I’m pretty sure they’re using [the skills they learned] on the front lines.”

“We don’t know what would have happened if we didn’t do that, but I’m pretty sure we made a difference,” he said. “They were very receptive and really appreciated the training we gave them.”

If anything, the invasion has exposed humiliating shortcomings in Russian military technology and the quality of its forces, their structure and command.

More than 180,000 Russian troops poured across the borders of Ukraine in February. They were immediately mired in supply-chain issues and soon started encountering heavy losses at the hands of Ukrainian defenders armed with drones, missiles and other technologies, much of it supplied by NATO members.

The security of Russian communications has been woeful. Ukrainian intelligence has routinely intercepted unencrypted radio, telephone and other chatter between enemy soldiers, revealing critical morale issues among the rank and file.

According to what Ukrainian intelligence claims is an intercepted call made recently by a Russian soldier, 25,900 invading troops have been killed in the fighting. Ukraine authorities had put the figure at 22,800; Britain estimated 15,000.

The New York Times reported Washington had provided intelligence that a dozen Russian generals have died. An investigation of public records by the independent Russian newspaper Mediazona claimed Russia has lost more than 300 officers, almost a third of them among senior ranks of major and above. 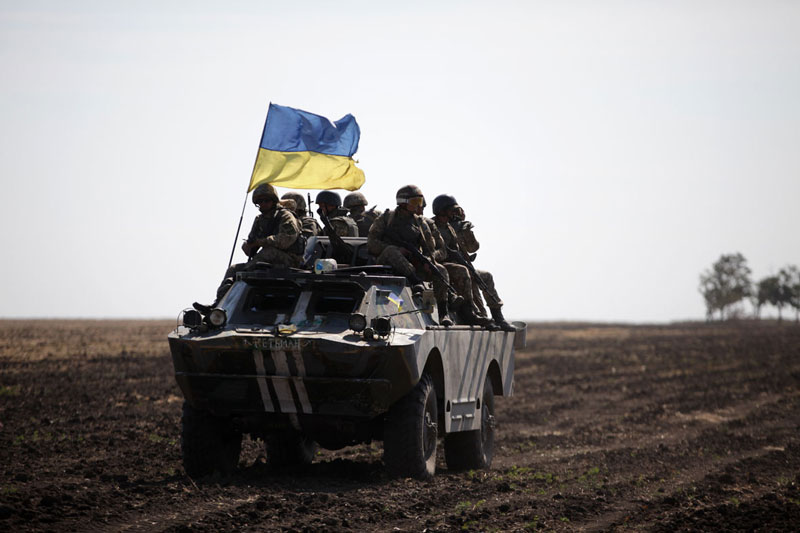 No single incident highlighted the challenges Russia is encountering more than the April 14 sinking of the missile cruiser Moskva, flagship of its Black Sea fleet. As many as 250 of the ship’s 560-member crew are believed to have been killed after it was struck by two Ukrainian Neptune missiles.

After his army’s attempts to take the capital of Kyiv were turned back, Russian President Vladimir Putin shifted the focus of Moscow’s “special military operation” to the strategic east, where his forces have been engaged in grinding battles in and around the industrial hub of Mariupol in Ukraine’s contested Donbas region.

The Russian offensive has been marked by what appear to be gross violations of international war crimes law, including the indiscriminate use of heavy weapons, looting, rape and executions of hundreds of Ukrainian civilians in occupied areas.

In a speech at the May 9 parade celebrating the Soviet Union’s Second World War victory over Nazi Germany, the Russian president claimed the West was “preparing for the invasion of our land, including Crimea.”

“Defending the Motherland when its fate is being decided has always been sacred,” he said in an 11-minute address, delivered 75 days into an invasion that was expected to last a few days. “Today you are fighting for our people in Donbas, for the security of Russia, our homeland.

“The death of every soldier and officer is painful for us. The state will do everything to take care of these families.”

NATO-led training appears to be influencing the course of the conflict.

The parade reportedly involved 11,000 troops, half the number who marched at the 75th anniversary celebration two years ago. The number of vehicles involved was a fraction of the usual.

A seated Putin watched the march past in 9 C weather with his legs under a heavy blanket. His health, both mental and physical, has been the subject of scrutiny. It’s believed he has Parkinson’s disease and is slated for cancer surgery.

Canada and other NATO countries have avoided direct military involvement in Ukraine, a non-member state which was seeking to join the alliance before Russia invaded. Putin has raised the spectre of nuclear war if NATO entered the arena.

But, along with its NATO allies, Canada has stepped up arms shipments, which have already included artillery pieces and ammunition, light-armoured vehicles, M72 rocket launchers and hand grenades.

During a May 8 visit to Kyiv and environs during which he met with Ukrainian President Volodymyr Zelenskyy, Prime Minister Justin Trudeau said Canada would further boost military assistance, including 18 drone cameras, small arms, ammunition, money for demining and C$15-million worth of satellite imagery.

Canada was also imposing new sanctions on “40 Russian individuals and five entities, oligarchs and close associates of the regime in the defence sector, all of them complicit in Putin’s war.” Trudeau added Canada would reopen its Kyiv embassy.

NATO-led training, much of it designed to distance Ukrainian forces from top-down, Soviet-era military doctrine and put more decision-making power into the hands of junior and non-commissioned officers, appears to be influencing the course of the conflict as Russian forces doggedly stick to old ways. 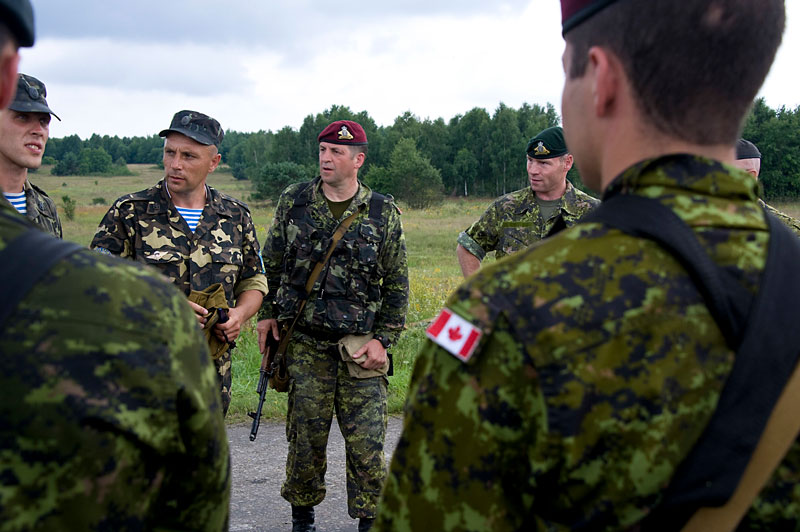 Canadian forces participate in airborne operations during Rapid Trident 2011.
U.S. Army Europe/flickr.com
Tite worked with administrators from multiple organizations to ensure they could perform their increasingly challenging jobs and to do so to NATO standards in a secure environment free of leaks or other compromises.

Tite said many of the Canadians would have preferred to stay and help, but that wasn’t their call. “It happened and we didn’t have any control over it other than we were trying our best to help them.”

A Canadian soldier who identified himself only as Nathan told The Walrus that he and some of his compatriots came into the program with a degree of arrogance, assuming the underfunded Ukrainians wouldn’t know what they were doing.

Starting with a lesson on how to operate a firing range practice, he said it was soon evident the Ukrainians were mostly not keen on rudimentary education; they wanted teachings that applied to the war they had already been fighting for years.

“We kind of realized that, writ large, the Ukrainian army doesn’t need to learn those things,” he told the magazine. “They’re an old army. They’ve got experience in multiple wars. A lot of the soldiers we were training there were at war in 2014, 2015, 2016.”

PrevPrevious ArticleInuit eyes on the North