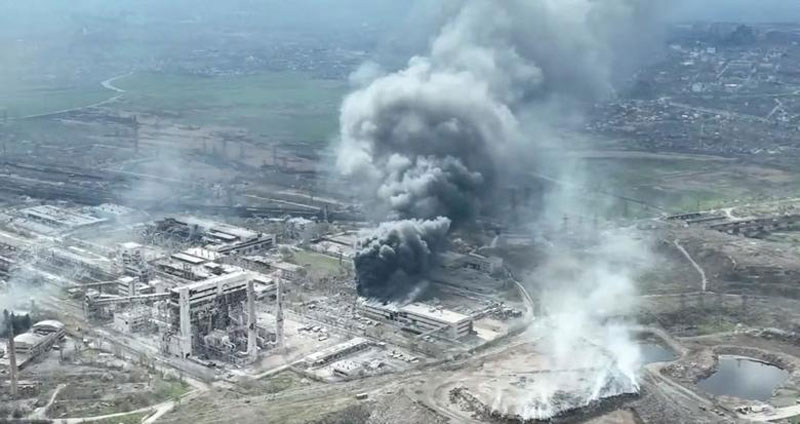 Smoke rises above the Azovstal steel and ironworks in Mariupol.
Mariupol City Council
A desperate band of Ukrainian fighters and more than 1,000 terrified civilians have been holed up beneath a sprawling factory complex for more than seven weeks—the last defenders of the besieged city of Mariupol.

Facing an unrelenting barrage of bunker-busting bombs from the air and missile strikes from the sea, the holdouts were surrounded by Russian troops and in dire need of food, ammunition and medical supplies.

“I always say that as long as we are here, Mariupol remains under control of Ukraine,” Captain Svyatoslav Palamar, leader of the controversial Azov Regiment, told the BBC from its stronghold under the ruins of the Azovstal steel plant.

“We’re surrounded; they’re bombing us with everything they can.”

The 24-kilometre maze of tunnels and workshops forms an intricate network beneath one of Europe’s largest metalworks. The Soviet-era complex, covering 10 square kilometres, produced more than four million tonnes of steel annually.

Its underground warren was littered with the dead and dying, including 500 seriously wounded fighters, some requiring major surgery. “After 52 days of blockade and heavy fighting we are running out of medicines,” Palamar said.

The city in Ukraine’s long-contested Donbas region has been a key Putin objective since he launched the invasion on Feb. 24. Its fall would deprive Ukraine of a major port and coveted industrial assets and provide the invaders with a land corridor from the Russian border to the Crimean Peninsula, annexed by Moscow in 2014.

The [Soviet] plant was a primary objective of Wehrmacht forces when the five-month Battle of Stalingrad began.

“We’re surrounded; they’re bombing us with everything they can,” a Ukrainian soldier named Gasim told The New York Times. “Our only plan is for the blockade to be broken by our forces so that we can get out of here.”

Claiming control over the city, Russian President Vladimir Putin called off a bloody assault on the plant and ordered his forces to seal off the complex instead. “Block off this industrial area so that a fly cannot pass through,” he told them. The siege and its accompanying photographs of ruined industrial buildings stirred vivid reminders of one of the most epic battles of the Second World War, in which Nazi Germany’s invading Sixth Army met the Soviet 62nd Army in the southern Russian industrial and transportation hub of Stalingrad (now Volgograd).

A turning point in Hitler’s bid to conquer the vast Soviet Union, the 1942-1943 Battle of Stalingrad was the deadliest confrontation of the 1939-1945 war and remains one of the bloodiest battles ever, with some two million casualties.

Designed by American architect Albert Kahn, the Stalingrad Tractor Factory was built in the 1920s during Soviet modernization and converted to a military plant during the war. It manufactured T-34 tanks, Katyusha multiple rocket launchers (known as “pipe organs”) and other fighting hardware.

The plant was a primary objective of Wehrmacht forces when the five-month Battle of Stalingrad began in August 1942.

With much of the city in ruin, fighting shifted to the industrial district in late-September. By early-October, German troops were at the approaches to the three big factories alongside the Volga River: the Red October Steel Factory, the Barrikady Arms Factory and the Stalingrad Tractor Factory.

Cold, hungry and far from home, German troops launched what would come to be considered the most savage assault of the entire battle on Oct. 14, moving in after a withering barrage of air and artillery strikes centred on the tractor factory. 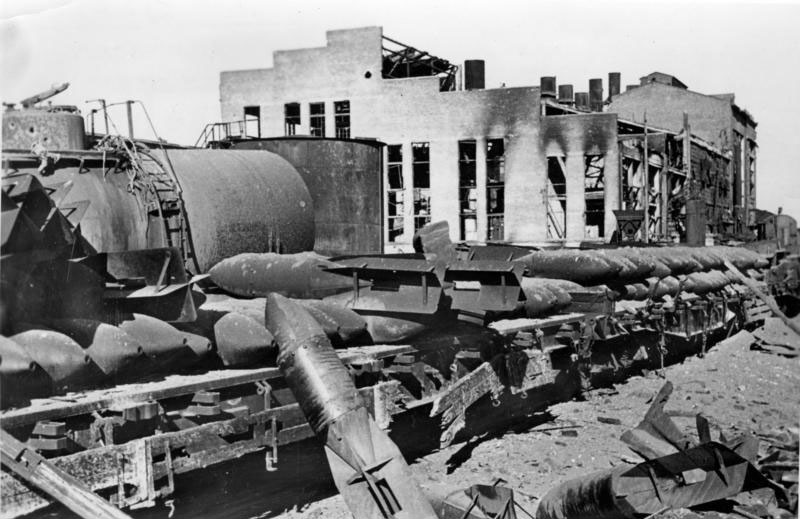 The Stalingrad Tractor Factory lies in ruin circa 1942.
German Federal Archive/Wikimedia
The initial ground attack took German Panzergrenadiers and grenadiers of LI Armeekorps through workers’ houses and apartments, fighting house-to-house, room-to-room through cellars and canals until they reached the steps of the giant tractor building, where the advance was held up by a stalwart Red Army defence, supported by artillery from the opposite riverbank.

The factory battle eventually landed on “Lyudnikov’s Island,” a patch of ground behind the Barrikady Factory where the remnants of Soviet Colonel-General Ivan Lyudnikov’s 138th Rifle Division turned back a series of ferocious German assaults. The division became a symbol of Stalingrad’s courageous stand.

Fighting in the industrial district continued until the battle ended in February 1943. By the time German troops reached the banks of the Volga the previous November, they had taken 90 per cent of what was then a ruined city. Red Army forces had been split and river ice floes were preventing boats from resupplying the defenders.

But the lions of Stalingrad weren’t finished.

“You’d be surprised at how well people can survive big bombs in a facility like that.”

Incredibly, Soviet counteroffensives prevailed, ultimately dealing Hitler’s aspirations in Europe an irreversible blow. It was the beginning of the end for the Nazi reign of terror on the continent and beyond.

Ironically, it was Soviet troops who liberated Mariupol on Sept. 10, 1943, after it had suffered under two-plus years of German occupation marked by widespread destruction and great loss of life. Its Jewish population was nearly wiped out.

In Mariupol last week, the labyrinth of rail systems, buildings, smokestacks, blast furnaces and stacks of steel lay in ruin. Russia’s low-tech bombs, bunker-busters, rockets and artillery had done their work. But, still, the survivors were hanging on.

The complex, built by the USSR in the 1930s and rebuilt after the Second World War, was thought capable of surviving a nuclear war. The underground network is built of thick concrete and heavy steel and is designed to withstand high temperatures.

“You’d be surprised at how well people can survive big bombs in a facility like that.”

Palamar said there could be no question of surrender, suggesting that guarantees from an untrustworthy Russian Federation in exchange for civilian passage out would be worthless. He called for a third country or international body to act as a guarantor for their safety.

Some civilians, many of them women and children, were trapped behind large slabs of heavy concrete that would require heavy equipment to move.

Mayor Vadym Boichenko has said there could be tens of thousands of civilian dead in Mariupol. Several mass gravesites have already been documented by satellite imagery.

Workers assemble farm machinery at the Stalingrad Tractor Factory in the 1930s. The plant was transformed into a military production facility during the Second World War.
Wikimedia
Notably, the Azov Regiment ensconced at the factory complex is a far-right, all-volunteer infantry  unit whose 900 members are ultra-nationalists accused of harbouring, of all things, neo-Nazi and white supremacist ideology.

The unit was formed in 2014 out of the ultra-nationalist Patriot of Ukraine gang and the neo-Nazi Social-National Assembly. Both follow xenophobic and neo-Nazi ideals and have physically assaulted migrants, the Roma community and people opposing their views. 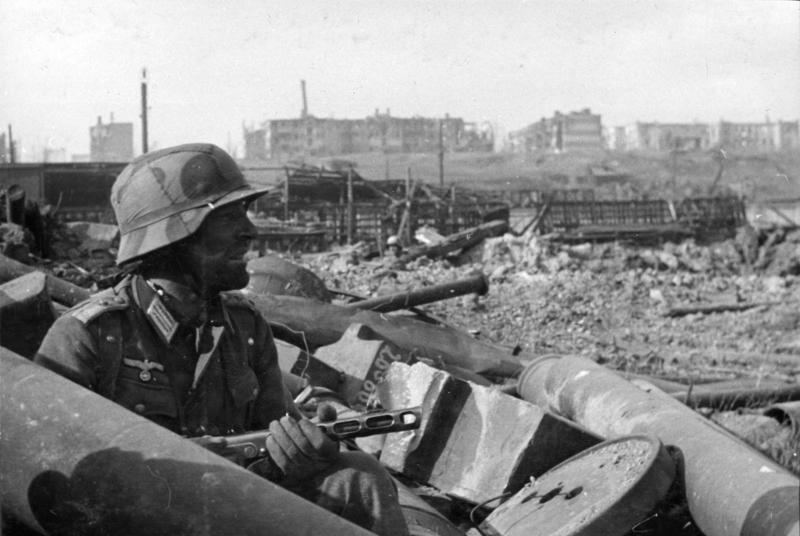 A German soldier with a Soviet PPSh-41 submachine gun in the rubble of Stalingrad’s Barrikady factory in October 1942.
German Federal Archive/Wikimedia
The battalion has fought pro-Russian separatists in Donetsk in eastern Ukraine virtually since it was officially integrated into the National Guard of Ukraine on Nov. 12, 2014. The guard tweeted a video in March of Azov fighters coating bullets in pig fat, ostensibly for use against Muslim Chechens fighting on Putin’s behalf.

The existence of such units was behind at least part of Putin’s rationale for his so-called “special military operation…to demilitarize and de-Nazify Ukraine.”

When the fighting ended in Stalingrad, the industrial complex by the Volga was cleared of shells and debris and restoration work on the tractor factory began immediately. Full-scale production miraculously resumed within months.

The factory was renamed the Volgograd Tractor Plant after the collapse of the Soviet Union in 1991.