Their own medicine: Ill-equipped Russians betrayed by old ally 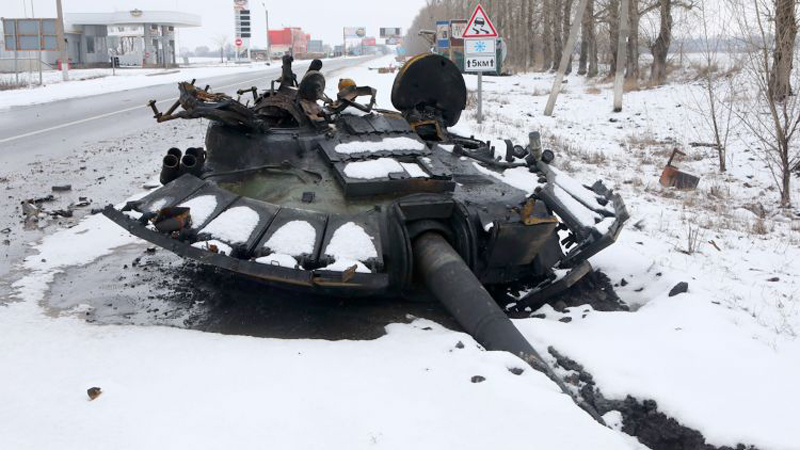 A Russian tank turret lies by the roadside on the outskirt of Kharkiv in northeastern Ukraine, days after Russia launched its invasion of the former Soviet republic.
Ukrinform

The line between disorder and order lies in logistics. —Sun Tzu

Back in early March, with a cold snap coming and the Russian advance stalled outside the Ukrainian capital of Kyiv, military observers warned Vladimir Putin’s invading army could be facing a different sort of trouble.

A column of tanks and heavy weaponry was lined up for 65 kilometres. It was low on food and fuel and already facing sub-zero temperatures after dark.

“A metal tank is just a fridge at night if you are not running the engine,” Glen Grant, a senior expert on defence at the Baltic Security Foundation, told Newsweek.

Grant predicted the young and inexperienced Russian troops wouldn’t wait for even colder weather to set in. “They will get out, start walking to the forest, and give themselves up” to avoid the deadly cold.

A Russian column sits on the border of Ukraine in January 2022.
Russian Ministry Press Service / Handout / Anadolu Agency
“You just can’t sit around and wait because if you are in the vehicle you are waiting to be killed,” he said. “They are not stupid.”

Former British army major Kevin Price told the Daily Mail that the steel tanks would become nothing more than “40-ton freezers” as temperatures dropped, which would demotivate invaders not prepared for warfare in the frigid conditions.

Indeed, faced with temperatures dipping into the –20s C, many Russian troops did give up, some describing the nightmarish plight of an undertrained, ill-equipped and unmotivated army facing a determined and well-calculated resistance.

And, like the doomed French Grande Armée and German Wehrmacht troops who invaded the Russian motherland in centuries past, they were also confronting freezing cold.

Intercepted cellphone and unencrypted radio communications suggest some Russian units have been ravaged by frostbite, even turning on each other out of frustration and desperation.

“Basically, it’s a shit show here,” a Russian soldier near Mykolaiv in southern Ukraine told a colleague in an independently verified recording released by the former Soviet republic’s security service on March 22.

The unidentified soldier told his friend that Ukrainian forces “tore apart” Russian units attached to his own, describing the invading force as surrounded and in complete disarray, with half his unit suffering from frostbitten feet.

“But they don’t plan to treat them in the [field] hospital,” he said, adding their commanding officer had told them the offensive, which began Feb. 24, would be over in “only a few hours.”

The steel tanks would become nothing more than “40-ton freezers” as temperatures dropped.

That Russians, of all armies, would be betrayed by cold weather is perhaps a reflection of the state of Putin’s flawed decision to invade his Ukrainian neighbour. The Kremlin, after all, should know better than anyone how strong an ally—or enemy— the notorious “General Winter” can be.

In 1812, in one of history’s legendary miscalculations, French leader Napoleon Bonaparte led his Grande Armée of almost half-a-million troops on forced marches deep into Russia. Like Putin, he had quick victory on his mind. 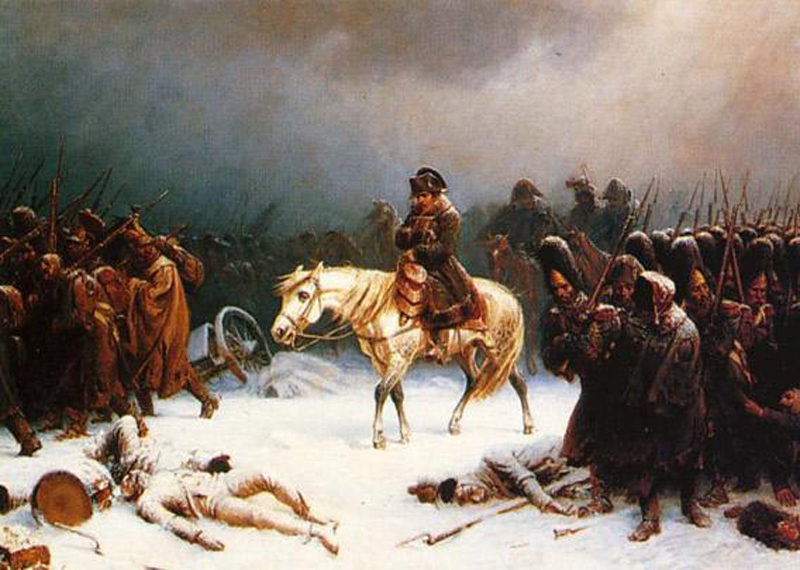 ‘Napoleon’s Retreat from Moscow’ by Adolph Northen.
Adolph Northen / Wikimedia
“I have come once and for all to finish off these barbarians of the North,” he is said to have told his top military advisors. “The sword is now drawn. They must be pushed back into their ice, so that for the next 25 years they no longer come to busy themselves with the affairs of civilized Europe.”

Within six weeks, he’d lost half of his men to extreme weather, disease and hunger. And that was only the beginning.

By September, Napoleon was down to 100,000 men and an early winter was setting in. Their supply chain stretched, they were short of food and cold-weather clothes, had no fodder for the horses and were battling guerilla attacks from Russian peasants and Cossacks.

More than half the remaining French died by the roadside of exhaustion, typhus and formidible weather. Heavy loot was thrown away; artillery was left behind. Still, those who could stand had to fight or face certain death.

By early November, snow was impeding the French retreat and only 49,000 troops were left in fighting condition. Plagued by cold, sickness, hunger and desertion, the Grande Armée had deteriorated into a disorganized mob. Napoleon left his disillusioned troops behind on Dec. 5, returning to Paris amid rumours of a coup.

Within days, 20,000 more French were dead from the bitter cold.

Napoleon’s mistakes were destined to be repeated by Hitler’s Wehrmacht almost 130 years later.

Despite the fact they underscored one of history’s most lethal and most studied military campaigns, Napoleon’s mistakes were destined to be repeated by Hitler’s Wehrmacht almost 130 years later.

In 1941, having failed to break British resolve in 1940, Hitler turned eastward and broke a non-aggression pact with Soviet leader Joseph Stalin by invading his communist state, launching one of the most barbaric and futile campaigns in military history.

Hitler, it seems, was of the mistaken impression the Red Army would collapse under the weight of 3.8 million Axis invaders.

Red Army troops lie dead after a Soviet column is hit during Stalin’s 1939-1940 invasion of Finland.
Reddit
Unprepared for the furious resistance that confronted them, the Germans became bogged down in a war of attrition. Having anticipated quick victory, preparations were not made—including warm clothing and winterization of vehicles and lubricants.

It was a long, cold, lonely winter for the Axis forces, and the Second World War’s deadliest battle lay ahead. Running from August 1942 into February 1943, the Battle of Stalingrad had an estimated two million casualties and, with an Allied Red Army victory, turned the tide of the war in Europe.

By November 1942, cold and starving Axis troops were up against a massive Soviet counteroffensive. Trapped, the Germans quickly ran out of heating fuel and medical supplies, and thousands were dying of frostbite, starvation and disease.

Commanding General Friedrich Paulus finally defied Hitler’s orders to “stand and fight” and gave himself up, along with 22 of his generals. On Feb. 2, 1943, the last of 91,000 frozen, starving soldiers—all that was left of the German Fourth and Sixth armies—surrendered.

The Soviets recovered 250,000 German and Romanian corpses in and around Stalingrad. Total Axis casualties are believed to have exceeded 800,000 Germans, Romanians, Italians and Hungarians.

The Ukraine invasion is not the first time cold weather has caught up with Russian troops.

Of the 91,000 men who surrendered, only 5,000-6,000 ever returned to their homelands. The rest died in Soviet captivity of overwork, starvation and disease.

Said an apoplectic Führer: “Paulus stood at the doorstep of eternal glory but made an about-face.”

Any soldier worth his salt will tell you: the devil is in the details.

Tanks can’t run without fuel. Men can’t fight without ammunition. And they certainly can’t live without food, water and adequate clothing. All have apparently been lacking in the 2022 Russian invasion of Ukraine.

“Even in terms of personal equipment for some of their troops, they’re having trouble and we’ve picked up indications that some troops have suffered and [been] taken out of the fight because of frostbite,” a Pentagon official told reporters on March 22.

The limited number of Russian guided munitions are reportedly failing at rates of 20 to 60 per cent, depending on the weapon and mission, due to the toll transport over rough terrain has taken on their electronics.

NATO officials estimated in mid-March that 7,000 to 15,000 Russian soldiers have been killed in Ukraine and as many as 40,000 in total had been killed, wounded, captured or gone missing. Russia may also have lost 10 per cent or more of its equipment, impairing its ability to maintain its pace of operations. 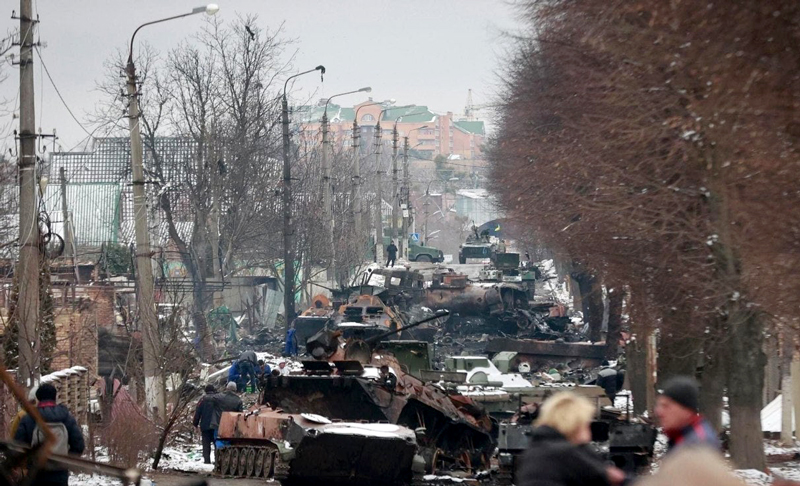 A scorched Russian column lies outside Kyiv on March 2.
Reddit
The website of pro-Kremlin Komsomolskaya Pravda newspaper recently quoted the Russian defence ministry as saying that 9,861 Russian soldiers had been killed and 16,153 wounded in little more than three weeks of fighting. The story was quickly taken down, but it appeared to be the first confirmation from Moscow that losses are much greater than Putin had been prepared to acknowledge.

In spite of its winter-aided victories of the past, the Ukraine invasion is not the first time cold weather has caught up with Russian troops. During the Winter War of 1939-40, when Stalin ordered an invasion of Finland, temperatures dropped to –43 C—bitter even by Russian standards. Finns used the cold, snow, forest and long hours of darkness to their advantage.

Thousands of Soviet soldiers died of frostbite during the two-and-a-half-month Battle of Suomussalmi, which began in November 1939. The Red Army also couldn’t ski so, unlike the Finns, it was restricted to long columns on roads.

They lacked proper winter tents, and troops had to sleep in improvised shelters. Some Red Army units suffered 10 per cent frostbite casualties before they even crossed the Finnish border. Russian military historian Grigoriy F. Krivosheev estimates that at least 61,506 Soviet troops were sick or frostbitten during the war.

Writing on the American online platform Substack last week, Russian journalist Farida Rustamova cited a high-level source in the Russian government who said Kremlin insiders believe the war to be a complete disaster.

“They’re carefully enunciating the word ‘clusterfuck,’’’ wrote Rustamova, who has worked for the BBC.

By late March, a Ukrainian counteroffensive had more than erased Russian gains around Kyiv and officials in Moscow were signalling that Russia was scaling back its ambitions in Ukraine to focus on territory claimed by Russian-backed separatists in the Donbas region to the east.