By the spring of 1945, the Allies had driven German troops into a defensive pocket near Wesel, on the Rhine’s west bank. But there was hard and bitter fighting yet to come before the Allies’ final thrust over the Rhine.

In early March, the Canadians were assigned to take Xanten, established by the Romans in about 15 B.C. and the place from which the German 256th Infantry Division launched its 1940 invasion of the Netherlands.

A Canadian armoured vehicle at Klever Tor, the entrance to Xanten, in March 1945 (left) and the same location in 2004.
© Hans Peter Schaefer, Wikimedia
It began with opening approaches to the town by Les Fusiliers Mont-Royal. Resistance was stiff. On March 3, a direct hit took out the wireless radio set and operator in the lead company.

In a move that would earn him the Military Cross, the signals officer, Lieutenant Bernard Lafleur, lit out for the lead company, carrying a replacement wireless set. Under continuous observation, his movements brought down a hail of heavy artillery and mortar fire. Undaunted, he reached the company, restoring communications “against seemingly unsurmountable odds (and making) a large contribution toward the success of the operation,” reads his citation.

On March 7, the 4th Canadian (Armoured) Division began fighting toward the Dutch town of Veen.

“The percentage of killed to wounded was higher than the battalion has ever experienced,” said the Algonquin Regiment war diary. Two companies suffered 50 per cent casualties achieving their first objectives, and it did not get easier.

All the next day, “our force was completely pinned down by anti-tank fire, snipers and shelling. Jerry sniping was uncanny and every time a head showed it was almost certain to be picked off.”

The town was taken on March 9. The division suffered 443 casualties in just five days, some of whom fell victim to booby traps left behind by retreating Germans. 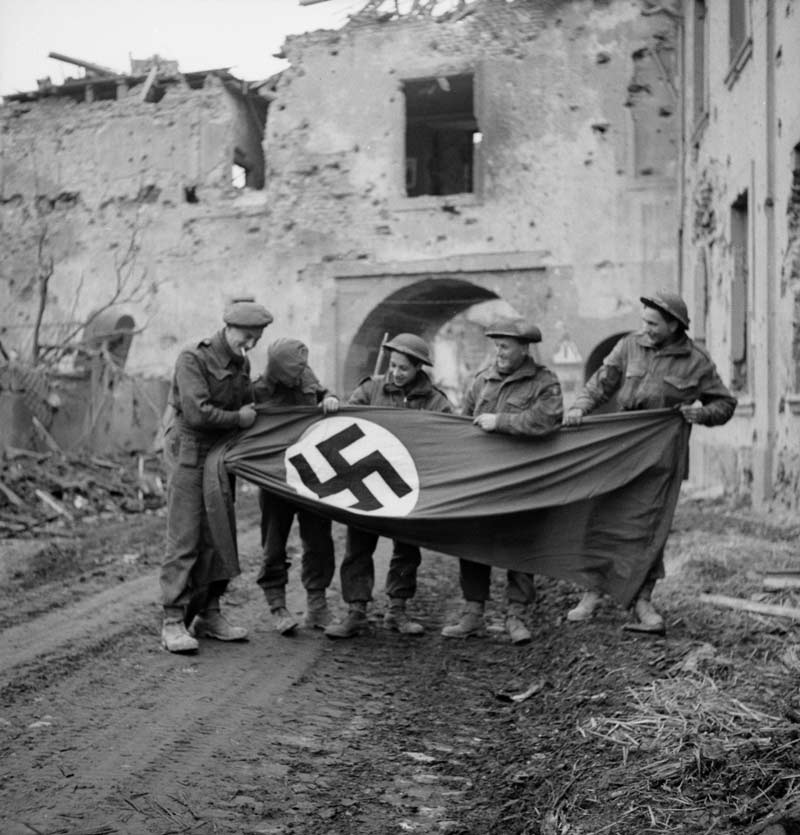 The task of taking Xanten fell to the 2nd Canadian Infantry Division, which had suffered nearly 100 casualties a day in the Battle of the Hochwald (Feb. 26-March 3).

The Germans, threatened with execution and reprisals against their families, fought like fiends. 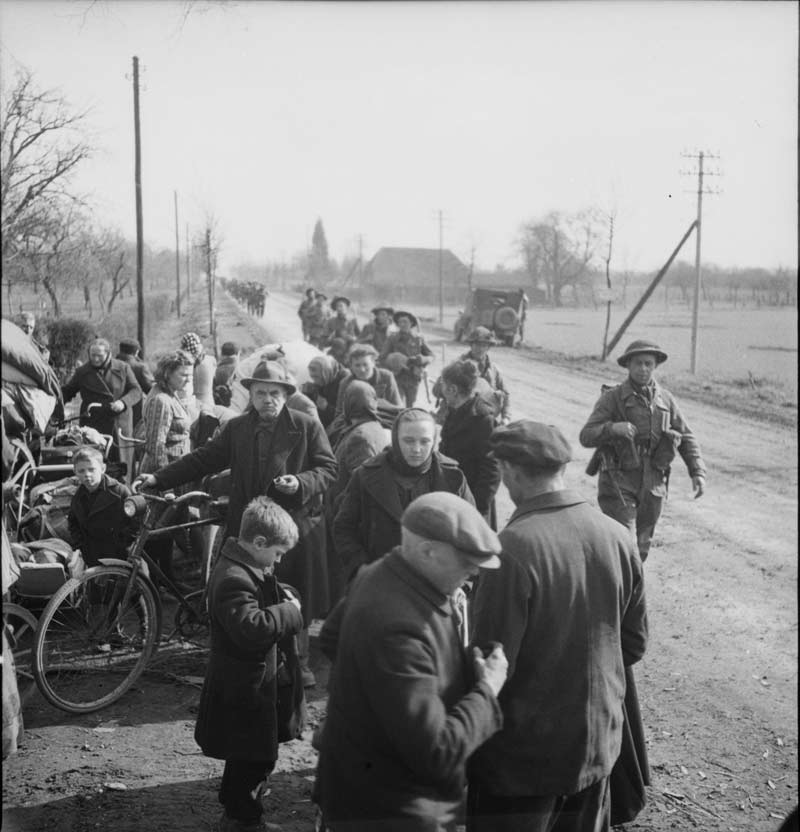 Refugees with their belongings, while members of the 2 Canadian Infantry Division file past in Xanten, Germany, on March 9, 1945.
LAC PA-166719
The advance began March 8. Each brigade was accompanied by two squadrons of flame-throwing tanks. Enemy artillery positions were attacked by air.

The battle began under a cover of smoke. German artillery across the Rhine rained fire on the town and defenders within had been ordered to hold it as long as possible and destroy bridges over the Rhine when they retreated.

The Germans, threatened with execution and reprisals against their families, fought like fiends.

“The enemy’s bridgehead on this side of the Rhine is steadily diminishing although no ground has been yielded willingly,” recorded the division’s intelligence officer. “The enemy fights on stubbornly to hold the bridgehead as long as possible using infantry remnants and light weapons, and support by artillery from the East Bank.”

Although the officer estimated there were about 6,000 enemy troops, “even the most desperate defence cannot postpone collapse for long, since the units in line are obviously inadequate to the task.” More than 900 prisoners were taken.

The Germans evacuated in the middle of the night March 10-11 and blew up bridges behind them.

But the U.S. army had seized the bridge at Remagen and established a bridgehead on the far side of the Rhine.

“A great deal of hard fighting against an obstinate enemy still confronts us,” said a report from Supreme Headquarters Allied Expeditionary Force. “Nevertheless, the enemy is most definitely showing signs of wear and tear which no patching can redress. Hitler and his gang are in a mess.”