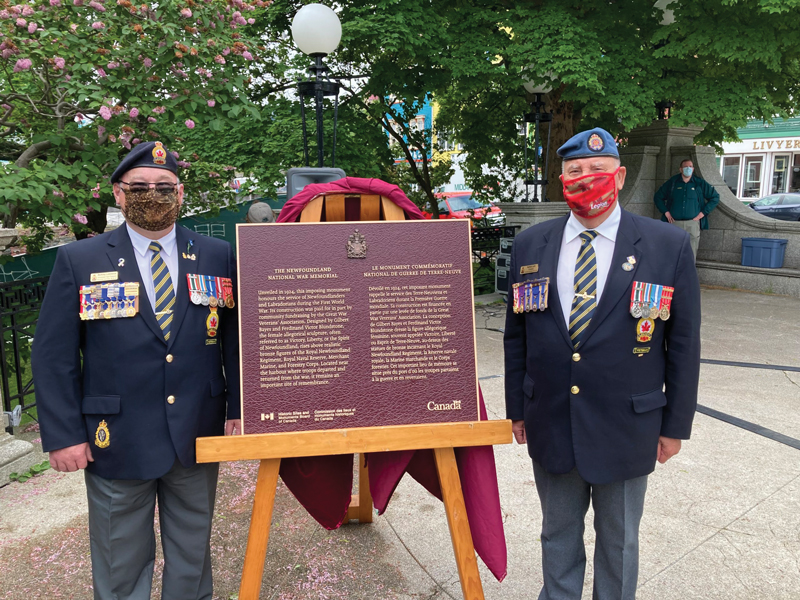 On June 28, 2021, the Newfoundland National War Memorial in St. John’s was acknowledged as a national historic site before a small group of dignitaries and onlookers.

Members of The Royal Canadian Legion’s Newfoundland and Labrador Command were joined by Premier Andrew Furey, St. John’s Mayor Danny Breen and MP Seamus O’Regan, among others, as a commemorative plaque officially acknowledging the memorial was unveiled.

The description on the plaque, developed by the Historic Sites and Monuments Board of Canada (HSMBC), recognizes “the service of Newfoundlanders and Labradorians during the First World War” and discusses the creation, design and impact of the monument.

“It just goes to show the rest of Canada the importance of the efforts made by Newfoundland’s government and the people of Newfoundland in the First World War,” said Dominion Vice-President Berkley Lawrence. “Newfoundland being its own country at the time,
we recognize that we need to
honour those we lost.”

The path to designating the memorial as a historic site was years in the making, after local historians Gary Browne and John FitzGerald penned a nomination letter to the board in 2016.

Unveiled on July 1, 1924, the memorial was developed to commemorate the service and sacrifice of the Dominion of Newfoundland and its people during the Great War.

Standing as a dominion within the British Commonwealth, Newfoundland had sent thousands of its sons to fight on the battlefields of Europe, many of whom would never return.

The greatest loss of life suffered by the dominion came on July 1, 1916, when the Newfoundland Regiment was all but wiped out at Beaumont-Hamel on the first day of the Battle of the Somme. Hundreds of Newfoundlanders lay dead or dying within 30 minutes of their order to charge, and fewer than 70 were able to stand for roll call the next morning.

The losses suffered by the regiment are said to have wiped out a generation of young Newfoundland men, the ripples of which can still be felt today. These losses were one of the key factors in the development of the memorial.

The next milestone for the monument will come in 2024 as it reaches its 100th anniversary. A restoration committee has been put together by the Legion to oversee repairs and detailing. According to Lawrence, who is chairing the committee, a key piece of this will be accessibility repairs, such as the steps and railings. A rededication ceremony is planned for July 1 of that year.

PrevPrevious ArticlePerseverance through uncertainty
Next ArticleCanada ‘falling behind’ on recommendations for veterans, says OmbudspersonNext