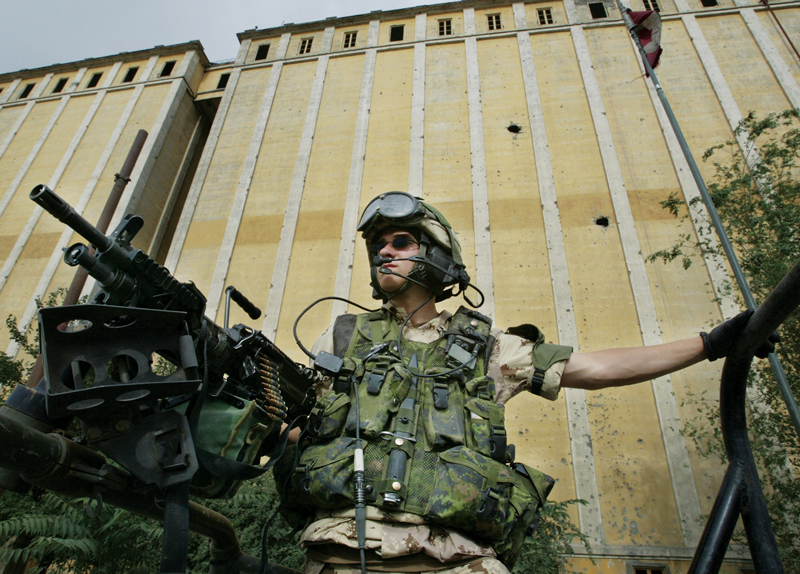 A Canadian soldier on NATO operations alongside the Kabul national bakery, its façade pocked by battle damage.
Stephen J. Thorne

Eighteen years of alliance operations in Afghanistan were doomed by mission creep, as allied nations poured undue effort and resources into helping rebuild the country rather than focusing on their core objective of defeating terrorism, said the head of the North Atlantic Treaty Organization.

Secretary-General Jens Stoltenberg recently said that NATO went into Afghanistan to prevent terrorists from continuing to use the country as an operations and training base. On that score, it succeeded—at least for now.

U.S.-led forces, including Canadians, entered the country within weeks of the 9/11 attacks in 2001, quickly establishing a foothold and driving surviving Taliban and al-Qaida into the mountains of neighbouring Pakistan.

While coalition troops were combating a relentless insurgency, however, they were also helping build and train a national army said to be 300,000-strong. Allied nations were streaming billions of aid dollars into Afghanistan, helping establish democratic institutions and building roads, schools and other infrastructure.

“That broader task proved much more difficult, so we must ensure that our levels of ambition remain realistic,” Stoltenberg said in Latvia on Dec. 1, after chairing a meeting in which foreign ministers discussed a report on lessons learned in Afghanistan.

Afghan army and national police were “hampered by corruption, poor leadership and an inability to sustain their own forces,” he said. “For the future, we must ensure that NATO training efforts create more self-sustaining forces.”

The Afghan National Army quickly collapsed as the final coalition withdrawal approached and Taliban fighters advanced district-by-district, province-by-province last August. Allied nations evacuated more than 120,000 people in the frantic days after the Afghan capital fell, most borne by the Americans.

Canada, which ceased combat operations in 2011 and withdrew its training mission in 2014, got 3,700 people out before the emergency airlift was abandoned. Most were Canadian citizens or special visa holders.

A co-ordinated suicide attack by Islamic State–Khorasan Province (a Taliban enemy also known as IS–KP or ISIS–K) killed at least 182 people, including 169 Afghan civilians and 13 U.S. military personnel, in mid-evacuation at the Kabul airport on Aug. 26. At least 150 others were wounded.

U.S. forces launched an airstrike the next day that they claimed killed three suspected ISIS–K members in Nangarhar Province. On Aug. 29, a second U.S. drone strike took out a suspected ISIS–K vehicle in Kabul. It turned out to be an Afghan aid worker. Ten Afghan civilians were killed, including seven children.

“We should be prepared to look for exit ramps.”

Mission creep is defined as “the unintended but almost inexorable tendency of military actions to broaden beyond their original scope,” according to a paper delivered during a 2020 conference at the University of Windsor in Ontario.

“The road to hell may indeed be paved with good intentions but that hardly means we should give up good intentions,” said “The Problem of Mission Creep: Argumentation Theory Meets Military History,” a paper co-authored by three experts from Oslo and one from Waterville, Maine.

“Rather, it means we should be prepared to look for exit ramps whenever we find ourselves going down that road.”

Questions surrounding the NATO coalition’s escalating involvement in Afghanistan began around a 2006 surge in fighting.

“Has NATO, the world’s most powerful military alliance that saw off the Soviet threat and brought two Balkan wars to an end, bitten off more than it can chew in trying to pacify lawless Afghanistan?” wrote Gareth Harding for United Press International in February 2006.

The somewhat rhetorical question came after the Kabul-based alliance opted to fan out into the unstable south, where U.S.-led forces had their hands full fighting an increasingly aggressive enemy out of Kandahar. The decision boosted NATO’s presence from 9,000 to 15,000.

“A growing number of military experts believe the bloc is sleepwalking to disaster in the mountains of the Hindu Kush,” added Harding.

Details of NATO’s December report on mission creep were not immediately released, although Stoltenberg promised to publicize its main findings.