From Battlefields to Farm Fields

A legion of demobilized servicemen settled in Western Canada after the Armistice.

On the field of battle, they developed alertness and wisdom, and they will return with both shedding from every pore. Action was their byword, and it will stand them in good stead now that the din of battle no longer rings in their ears….” 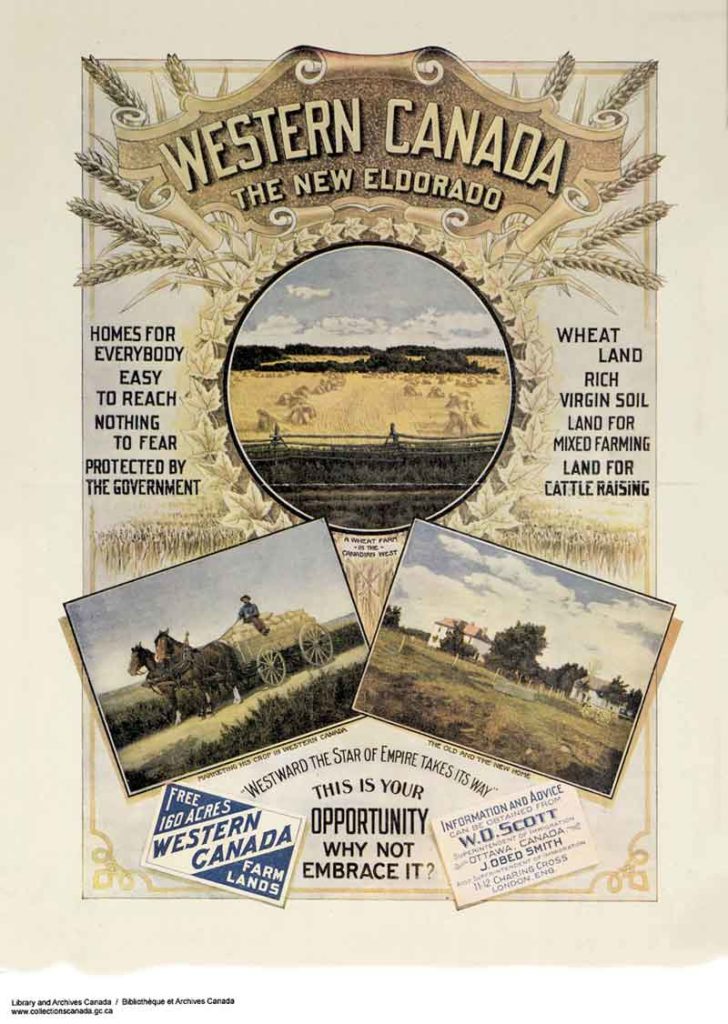 A new kind of recruitment poster declares Western Canada “The New Eldorado.” Glenbow
CU183190; LAC/2945432
So proclaimed the pamphlet Canada West: The Last Best West in 1919. From 1904 to 1930, the annual publication was part of Ottawa’s decades-long drive to attract immigrants to settle and till the soils of the four western provinces. It had traditionally targeted British, Americans and northern and eastern Europeans, but this 1919 issue was aimed squarely at returning Canadian servicemen.

“The Canadian people, under the supreme test of a war such as the world has never seen before, have borne themselves in a way that has made an enduring name for the Dominion.… The end of the war has opened new perspectives…particularly to the Canadian West,” the narrative continued.

Pitched at soldiers who had returned home to find original jobs gone or no longer attractive, it went on to pronounce “farm life will doubtless appeal to them.… By following the pursuit of agriculture, the returned soldier will continue the cause he so greatly advanced when fighting on the field of battle,” referring to the war-shattered nations of Europe that now needed sustenance. 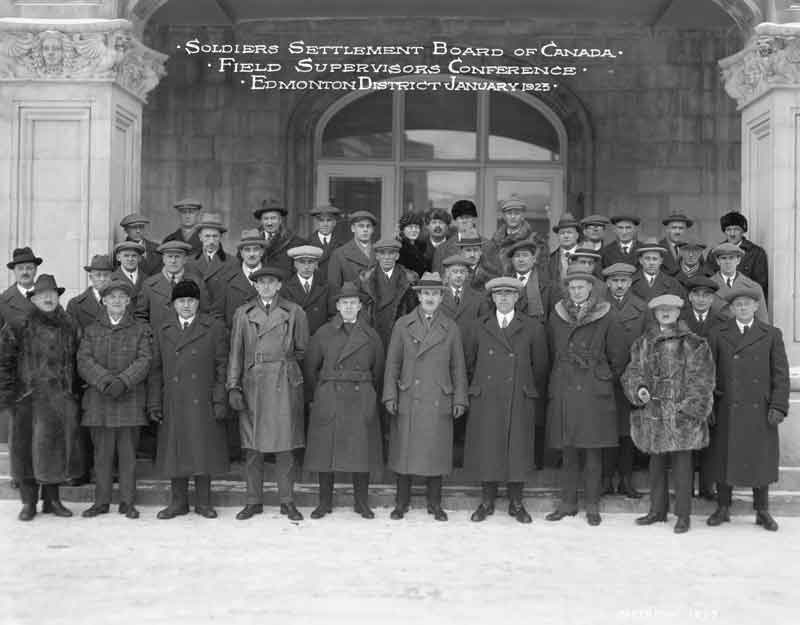 Field supervisors from the Soldiers Settlement Board gather for a 1923 conference in Edmonton.
University of Calgary/Glenbow Museum/CU155386
The journey home was a long one for Canadian war veterans after the Armistice in 1918. After years spent far away under often harsh and deadly conditions, they now faced a difficult return and readjustment to their country and their families.

On the day after the Armistice, some 275,000 active soldiers were still overseas and anxious to get home as quickly as possible. The first task facing the Canadian Corps was to successfully demobilize this massive force of soldiers and non-permanent army personnel.

Since the turn of the century, the federal government had been trying to populate the western provinces with new immigrants willing to put in the work to bring their fields into production and help build a new agriculture-based industry for Canada. Annual immigrations had numbered in the hundreds of thousands, but the war had collapsed that to a trickle. What better way to fill the gap than with thousands of proven and fit young men in their prime who were looking for a new back-to-the-land life after experiencing such unimaginable horrors?

“Bring all the horses you can.”

The Dominion government already had in place free land grants of 160 acres to homesteaders who were required to develop it to federal specifications within three years before being granted legal title.But in anticipation of a rush of demobilized soldiers seeking new lives, it passed the Soldier Settlement Act in 1917 which, among other incentives, offered a loan of $2,500 to help returning soldiers buy and equip a farm. The standard free homestead was still available as well. Later updates raised it to $3,000 for livestock and equipment. Terms were 25 years at five per cent interest. 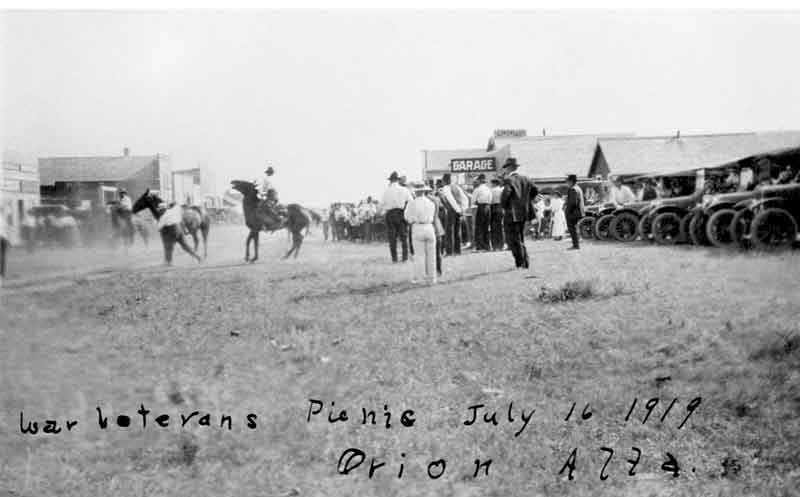 A horse race forms up during a veterans’ picnic in Orion, Alta.
University of Calgary/Glenbow Museum/CU183190
The act, updated in 1919, created a Soldier Settlement Board to oversee all aspects of the western resettlement program. Special committees were formed. One evaluated applicants for suitability and classed each as (1) fit and ready; (2) needing farming training; or (3) definitely unfit.

The board had a field staff of some 150 men, mostly ex-soldiers with farming experience—many with degrees in agriculture—who visited new settlers and offered advice. One of the many policy considerations was “to help the inexperienced or city-bred wife in the development of her home and its economic and social relations.”

The board offered extensive support to those with little or no farming experience. It provided official plans and drawings for house construction, ranging in four types from “A: one man” to “D: man, wife and large family.” The plans allowed for easy expansion to a larger type as a farmer grew from bachelor to family man.

The board also designed and provided plans for an easy-to-build lean-to barn large enough to accommodate four horses and two cattle. Each had divided stalls and mangers. And cost estimates were included.

The T. Eaton Co. Limited spotted an opportunity and spent considerable time designing several optional one-stop, ready-made packages that met the board’s specifications, including everything from precut eight-inch floor joists to roofing. The company’s 1919 brochure invited prospective new farmers to view its range of equipment and implements at display rooms in Winnipeg, Regina and Saskatoon.

“We have opened a Soldiers’ Settlement Department, which will handle all soldiers’ equipment orders,” said the brochure’s text. “You have the privilege of leaving with us the loading of your cars, the packing and shipping of your goods, the careful consideration of all your needs, and the dispatch of the goods on time.” 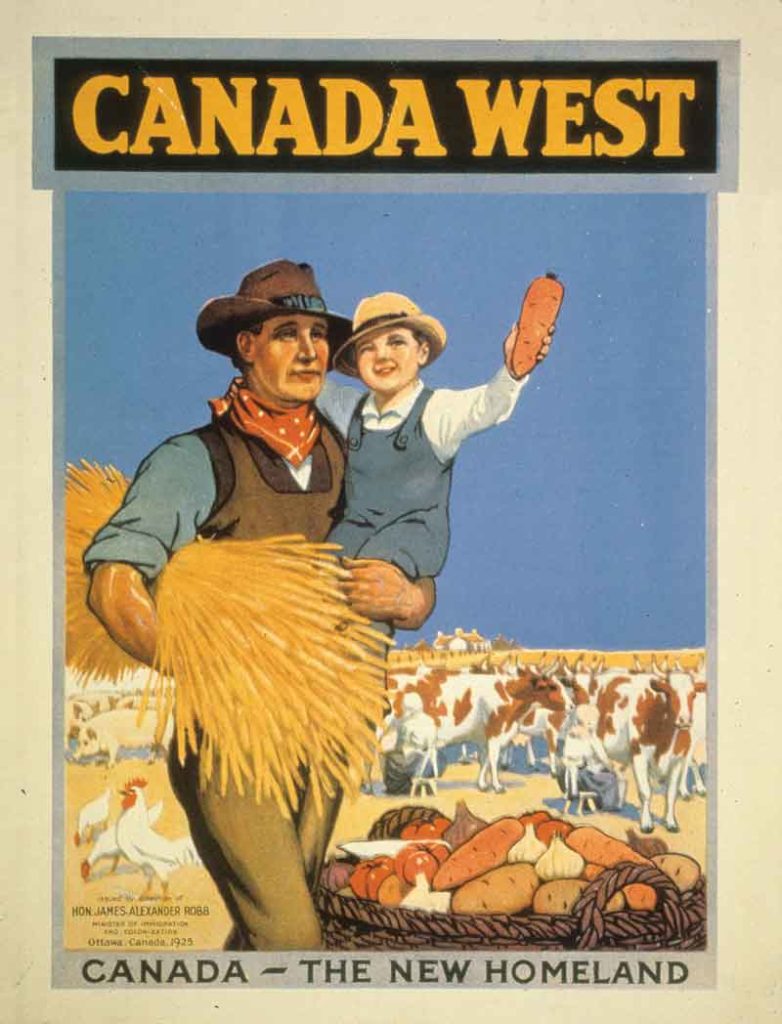 Its pages were packed with advice, regulations and practical information for the prospective pioneer. Hints abounded, from “For the Man Who Has Less than $300” (he’d better work for wages the first year) to “What $1,200 Will Buy” (decent equipment including a $20 stubble plough). And much more: colour maps with township borders showed new farmland available and proximities to rivers, towns, roads and railways—everything needed to entice.

In that 1919 issue, “Valuable Hints for the Man About to Start” included tips for those heading west and bringing their own effects.“Bring all the horses you can. Five big horses can pull a 12-inch gang through the sod but six can do it easier and you can use four on the harrow,” said the article. “The first two years on the new land is hard on horses, and you will need plenty.”

Freight regulations limited livestock to 10 head and lumber to 2,500 feet in total length. To care for livestock on the journey, “one man will be passed free in charge of full carloads of settlers’ effects when containing live stock, to feed, water and care for them in transit.”

The overall pitch was rosy and government efforts were noble, but the Crown lands available to returned soldiers were not all in desirable locations.

Many were far from railways, were heavily forested, or had poor soils—the very reasons why they weren’t already homesteaded or were abandoned by previous homesteaders. The Interlake region of Manitoba, Peace River Country and the arid Palliser Triangle were typical examples.

But there was other excellent land in Western Canada sitting vacant, unused and unproductive and which wasn’t Dominion land. It was the vast acreages held for speculation by the railways, the Hudson’s Bay Company and other companies and individuals. (Most were from historic rights-of-way and fur-trade land grants.)

Indeed, the influential Grain Growers’ Guide estimated that 30,000 acres of good farmland in districts served by rail in the three Prairie provinces were “absolutely idle.” This land was a “national asset,” the guide said, but “a comparatively few men and corporations have hogged it.”

However, little action was taken against land speculators. Instead, the government seemed to favour acquiring valuable Indigenous reserve lands (see below).

Six years after the Armistice, more than 30,000 former soldiers had been settled on 5.8 million acres of former Crown lands in the Prairie provinces. Despite the good life depicted on the cover of Canada West, the program’s success was debatable: by the end of 1924, the board reported, only about a third of those war veterans were “soundly on their feet.” 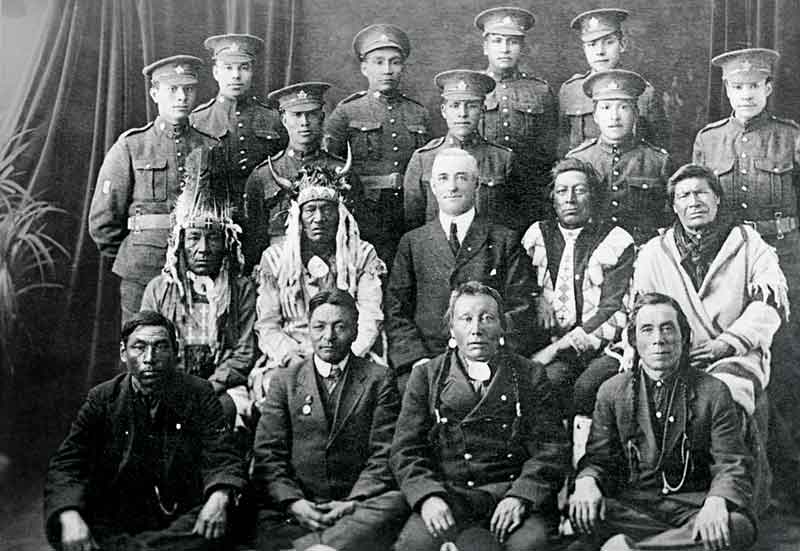 Much of the land offered to returning soldiers had been part of Indian reserves. The Soldiers Settlement Act allowed the government to purchase “any Indian lands which, under the Indian Act, have been validly released or surrendered.”

The Indian Act was amended in 1918 to allow the seizure of Indigenous land without majority consent. Earlier amendments had allowed its sale to the government. In all, 85,000 acres of mostly rich agricultural Indigenous land was purchased and distributed to veterans.

Indigenous veterans received little: of approximately 4,000 applicants, only 224 (six per cent) received loans from the Settlement Board. The average for all veteran applicants was 79 per cent.Because of their patriotism, high enlistment rate and distinguished war record, Indigenous soldiers had received wide attention. Despite this, their rights and land base were both eroded.

“Possibly no race of British people contributed so much toward the winning of the war as did the Canadian Indians,” commented The Farmer’s Sun in 1919. 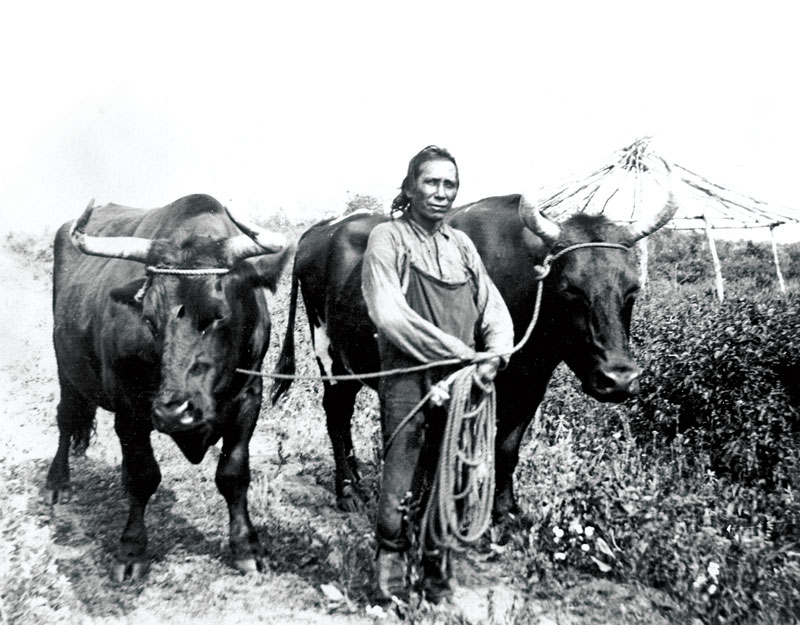 An Indigenous farmer in Manitoba circa 1900.
Archives of Manitoba/P1177