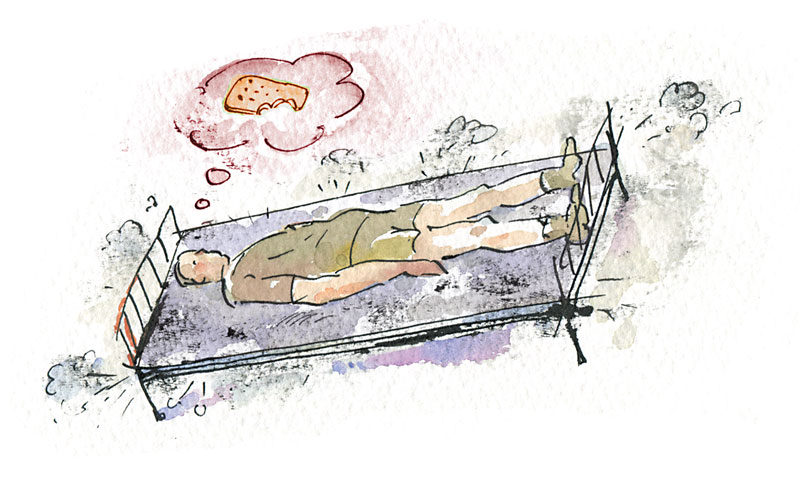 Illustration by Malcolm Jones
Many Canadian soldiers arriving in Britain at the start of the Second World War found themselves billeted at Aldershot, which had been a training ground for more than 80 years. The Canadians were issued mattresses which came in three pieces called biscuits, which they suspected dated back to the opening of the camp. The biscuits were hard and filthy, impregnated with soot from the coal-burning stoves that heated the barracks. The Canadians soon dubbed them “sons of biscuits.”

­­ During the Gulf War, a hotel in Dubai became a home base for a collection of Canadian war correspondents and military personnel, including public affairs officers and staff members. There was no bar, but the hotel did offer a mini bowling alley for entertainment and the Canadians tended to congregate there in the evenings to bowl, spectate or kibitz.

One night a hotel bellman walked in, apparently searching for a guest. “Scott Allerd,” he said tentatively. The Canadians gave no response. “Scott Allerd!” he repeated in a louder voice. Again, no reaction. He became agitated, repeating his mantra of “Scott Allerd!” without eliciting an answer. One of the Canadians walked over. He looked at the anxious bellman and thought for a moment, then his eyes widened.

He grabbed the man by the shoulder. “Scud alert?” he asked. The bellman grinned and nodded enthusiastically. “Scud alert!” the Canadian shouted, ending the bowling and triggering a scramble for the shelter in the hotel basement.

During the war, the Iraqis fired dozens of their modified Scud missiles around the region. That night in Dubai, the Scud alert was a false alarm. It did, however, provoke conversations with the hotel management, which promised to entrust future alerts to staffers more fluent in English. George Zwaagstra of Halifax joined the Royal Canadian Air Force in 1954 and, after training, worked as an electrician posted to the Central Experimental and Proving Establishment at RCAF Station Rockliffe in Ottawa.

One day, he and his fellow electricians were installing 10 gyrocompasses for an airborne experiment. A corporal named Jerry was supervising. Zwaagstra explains the rest: “I was on my back under a bench doing the wiring and Jerry was installing the compasses on the bench, or so I thought. “I said, ‘Jerry, pass me the wrench, please.’ A hand with the pliers, an arm with three golden bands and a head with a cap decorated in gold appeared.” The corporal had left to fetch something.

­­­­“When I came back to the section, our squadron sergeant told me that the squadron leader wanted to see me in his office. I knocked on the door. ‘Come in.’ I opened the door and, to my surprise, there was a wing commander talking to the squadron leader. “They looked very serious. All I could think was, ‘George, you are in deep trouble.’ “The squadron leader looked at me and said: ‘George, I’d like you to meet Jerry’ and to the wing commander he said, ‘Jerry meet George.’ “I apologized. He shook hands with me and smiled.” The trio had a good laugh and a relieved George went back to work.

“All I could think was, George, you are In deep trouble.”

The Canadian Armed Forces is in the process of acquiring a new pistol to replace the Browning Hi-Power. The weapon has been around for a while. It has been used by Canadian forces since 1944, so it’s not unreasonable to be looking for a replacement. The CAF tends to get a lot of service out of their small arms.

The venerable short magazine Lee-Enfield No. 1 Mark III—a bolt-action rifle—was introduced to the British army in 1907. It was officially adopted by Canada in 1916 and remained the standard issue infantry rifle until 1943. The No. 4 Mk I* Lee-Enfield was finally replaced in 1958 by the Belgiandesigned FN rifle, designated in Canada as the C1A1. That was itself replaced by the C7 in the mid-1980s, giving it over 30 years of service by now. None of these are even close to the record for longest service. The British army’s Brown Bess musket was introduced in 1722 and retired in 1851!

And the Browning pistol may be around for a while longer. In July, the procurement process was delayed by a complaint from one of the would-be suppliers, which claims the government specifications favoured a competitor.

In the years leading up to the Second World War, Admiral Percy Nelles was chief of the naval staff and ran the Royal Canadian Navy. He was a dour, diminutive man, although his wife, Helen, was considered much more formidable. One admiral recounted in his memoirs that when naval headquarters went to expand on the outbreak of war, it was thought prudent to look for new quarters off-site rather than ask the Naval Officers Wives organization to vacate the offices they occupied and clash with Mrs. Nelles.