Home » Our Veterans » An unexpected crowd 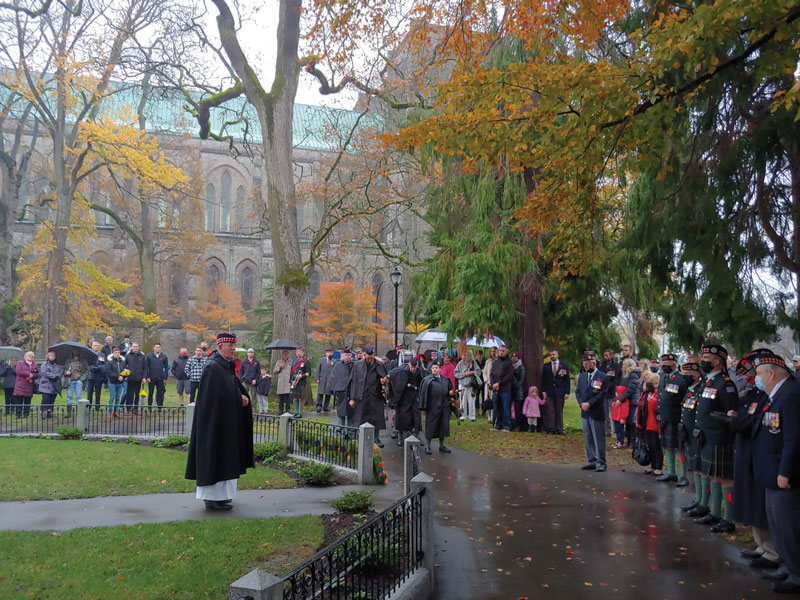 Reverend Andrew Gates looked out over the large crowd gathered around the cenotaph on the grounds of the British Columbia legislature in Victoria. Light drizzle came and went, but the temperature was mild with a little breeze. There was some social distancing, but with more than 3,000 people, the space was crowded.

Remembrance Day is a provincial holiday in B.C., so there were only a couple of small school groups. Instead though, there were many families with children of all ages. The crowd spilled off the legislature grounds, blocked Belleville Street, and extended in a long, broad column up Government Street between the harbour and Fairmont Empress Hotel to the edge of the downtown business district.

The crowd was utterly unexpected, agreed Angus Stanfield, chair of the Victoria Remembrance Day committee poppy fund. Hoping to reduce potential public COVID-19 exposure, the organizers had announced a much-reduced program and asked people to stay home and watch the event on local television instead. “Having not been able to participate in remembrance ceremonies last year due to the pandemic, people were clearly determined to show their respects this time. We respect that,” said Stanfield.

With vaccination rates in Greater Victoria health regions ranging from 88 to 92 per cent, Victorians seemed confident that they could safely attend ceremonies. Certainly, turnout—whether in Esquimalt, Langford, Sidney or elsewhere—exceeded expectations. The ceremony at the Cross of Sacrifice in the Commonwealth War Graves Commission sector in Ross Bay Cemetery usually attracts a few dozen. This year, several hundred turned out. Some said they attended to avoid events where crowds might be larger. 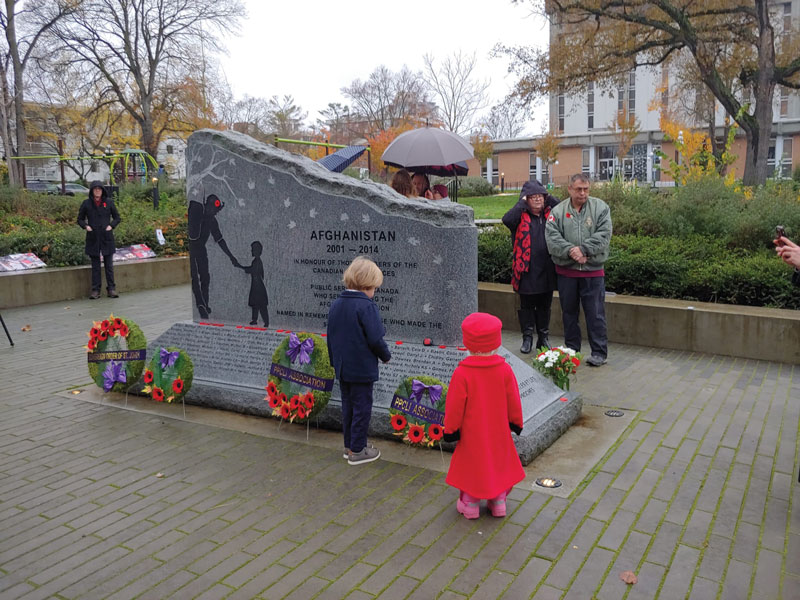 Children place their poppies on the BC Afghanistan Memorial.
Mark Zuehlke

One of the first ceremonies was held at 9:45 a.m. at the BC Afghanistan Memorial behind the provincial courthouse and across from Christ Church Cathedral. A granite memorial with the image of a Canadian soldier and an Afghan child reaching out to each other, the base is inscribed with the names and dates of death of Canadian Armed Forces and public service personnel lost in the Afghanistan war. The image was inspired by a photo taken by Reuters photographer Finbarr O’Reilly of Canadian Lieutenant Michael McCauley in southern Afghanistan on July 13, 2007.

Retired colonel Jamie Hammond, who served more than 18 months in Afghanistan and commanded the Special Operations Task Force in 2002, presided.

“This year the…memorial holds even greater significance than in the past,” he said. “Yes, we will be inspired by the fallens’ commitment to others…. Yet, with the withdrawal of U.S. and coalition military forces from Afghanistan and the re-establishment of Taliban rule, we all have to ask—was it worth it?”

Hammond answered with a resounding “Yes.” He cited 25 million Afghans under age 25 schooled between 2001 and 2014, much improved medical care and “a new generation of young women who are aware of their rights.” There is, he said, no going back to the 1990s and the Taliban knows that. “Canadians gave Afghanistan a new generation. What Afghans do is now up to them.”

Others set their poppies on it—the light grey stone scattered with droplets of red.

Those who died during the war “served without knowing what the final result would be,” said Hammond. “But they gave everything because they believed in intangibles like duty, respect for others and those even more elusive Canadian values. That is what makes real heroes—doing the right thing even when the path is dangerous and difficult, or the goal distant.”

Bing Chow was among the gathered crowd of about 150. He served with the Canadian Provincial Reconstruction Team in 2008. He came to show his respect, Chow said, and for his two daughters—Katie and Ellie—to learn about the war. “They are old enough now to understand.”

When the formal ceremony ended, Chow and his daughters huddled before the memorial as he pointed to names. They then placed a bouquet of flowers before it while others set their poppies on it—the light grey stone scattered with droplets of red.

Most of those at the Afghanistan Memorial walked about 15 minutes through drizzle, arriving at the legislature cenotaph minutes before the ceremony began. Running about 30 minutes—shorter than normal and without the traditional parade from the legislature past a reviewing stand looking out on the harbour—it still encompassed the essentials: “O Canada,” “Last Post,” the silence, “The Lament” and a hymn, a prayer and a blessing.

Referring to the Spanish flu of 1918, Gates said, “O great and mighty One, this pandemic is different, though no less deadly, but not much else has changed over the past 100 years. We still grieve those who are missing…. Even our prayers are much the same, and we say them year after year after year after year. Teach us the love that will make this stop.”

Gates then offered what he called a “paradox blessing” that ended with the hope for people to be blessed “with the foolishness to think that you can make a difference in the world, so that you will do the things which others tell you cannot be done.” 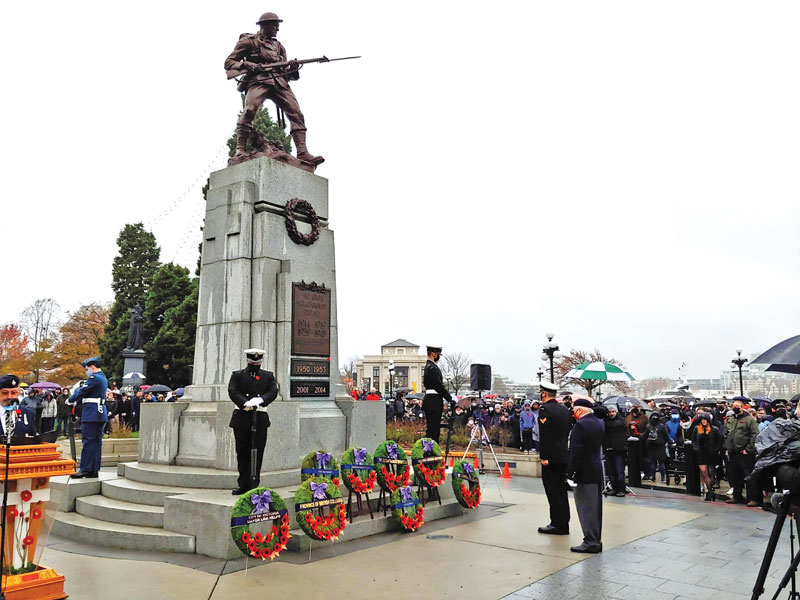 Angus Stanfield, chair of the Victoria Remembrance Day committee poppy fund, stands before the cenotaph in front of the provincial legislature after placing a wreath on behalf of The Royal Canadian Legion BC/Yukon Command and for the youth of British Columbia.
Mark Zuehlke

Looking out at the unexpected throng, Gates, with a wry smile, announced that the formal program was concluded. In the aftermath, many came forward to place poppies at the base of the cenotaph.

Many then walked back to Christ Church Cathedral, where The Canadian Scottish Regiment (Princess Mary’s) cenotaph stands adjacent in Pioneer Square. This cenotaph was originally a wooden cross erected on Vimy Ridge after the battle. It was installed in the square in 1938, then replaced in 1951 by the current stone cross; the wooden one is preserved at the Bay Street Armoury. This is where the regiment gathers every Nov. 11 after the legislature ceremony.

Normally, the event is well publicized, but this year the regiment issued no formal public invitation. Yet people gathered. Soon a small group of uniformed and kilted Can Scots and retired members in regimental Glengarry bonnets arrived.

Gates—now in his role as regimental association padre—stood in front of the cenotaph, seemingly oblivious to the increasingly heavy rain. Then a pared-down contingent of the regiment’s pipe-and-drum band marched up a path from beside the cathedral to the cenotaph.

“People were clearly determined to show their respects this time.”

By now, more than 250 people—many young and in civilian dress—had gathered under umbrellas or standing unmindful of the rain dampening clothes and faces. After the brief ceremony led by Gates, the pipers and drummers retired. People approached the cenotaph to place poppies at its base.

One man, dressed entirely in black with a heavy black mask, then walked across the street to the Afghanistan Monument. Bending, he added his poppy to the tidy line running along the narrow ledge above which the inscription reads: “Named in remembrance are those who made the supreme sacrifice.” Straightening, the man gave the memorial a long, thoughtful look and then walked away.