‘Snowmageddon’ and the military’s role in fighting disasters 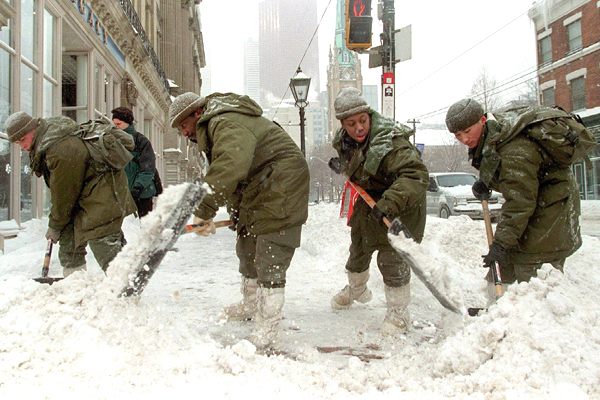 Private Paul Roventa, Master Corporal Gary Walters, Corporal Cameron Kerryann and Pte. Phil Cheung of The Royal Canadian Regiment shovel snow in Toronto on Friday, Jan. 15, 1999.
Kevin Frayer/CP
Twenty-three years ago, on Jan. 13, 1999, Toronto was under siege. More than 118 centimetres of snow had fallen since Jan. 2 in what became known as “Snowmageddon.”

With the latest dump of 27 centimetres, then-mayor Mel Lastman called his second emergency in 10 days and, with that, appealed to defence minister Art Eggleton, himself a former Toronto mayor, for military relief.

538 green-clad soldiers, armed with shovels, descended on the city.

With municipal snow-clearing costs destined to exceed $70 million for the month—more than double the annual budget—538 green-clad soldiers, armed with shovels, descended on the city aboard armoured vehicles in one of the Canadian military’s most ignominious moments. Another 800 more were on call.

The 1990s were a bad time to be a soldier in Canada. The Somalia scandal and subsequent disbanding of the Canadian Airborne Regiment was a black mark that cut deeply into hearts throughout the infantry regiments, not just the paratroopers.

The prevalent overseas mission at the time, United Nations peacekeeping, was a source of frustration for many a soldier whose work in the Balkans, the Middle East and elsewhere was often hampered by restrictive rules of engagement.

At home, the public generally had little concept of what its soldiers were doing, often as not assuming their blue-helmeted roles amounted to little more than those of beat cops keeping two gangs at bay.

There was little media coverage of Canadian operations. Fighting in Croatia’s Medak Pocket came and went with barely a whisper back home. Dead and wounded were shuffled back in secret. Canadian troops arrive in Abbotsford, B.C., to assist with flood recovery in November.
Dale Klippenstein/Canadian Armed Forces
The military had become the butt of insults and ridicule, from news stories on overweight soldiers to misguided jokes: being a nice guy is like the Canadian military—cute, innocent, isn’t taken seriously and will never get any action.

Afghanistan changed that misconception, big time. And so did some pivotal domestic deployments that put Canadian troops front and centre in trying times.

The circumstances have put Canadians face-to-face with their men and women in green, many for the first time.

The post-9/11 deployment of troops to al-Qaida’s training ground lasted more than 12 years, elevating military visibility and appreciation in the eyes of everyday Canadians, who returned to remembrance ceremonies in record numbers.

At home, Canadian soldiers have been more up close and personal in recent years than ever before.

With changing climate, bigger and more frequent wildfires, more extreme weather events and flooding, along with a pandemic, it’s the military, with its labour pool and expertise in co-ordinating logistics on a broad scale, that the stricken have turned to in times of crisis.

The circumstances have put Canadians face-to-face with their men and women in green, many for the first time.

“Over the past decade, Canada has become more reliant on the CAF to respond to domestic emergencies, which are growing in frequency,” said The Canadian Armed Forces and Humanitarian Assistance and Disaster Relief: Defining a Role, an August 2020 paper for the non-partisan Centre for International Governance and Innovation in Waterloo, Ont. 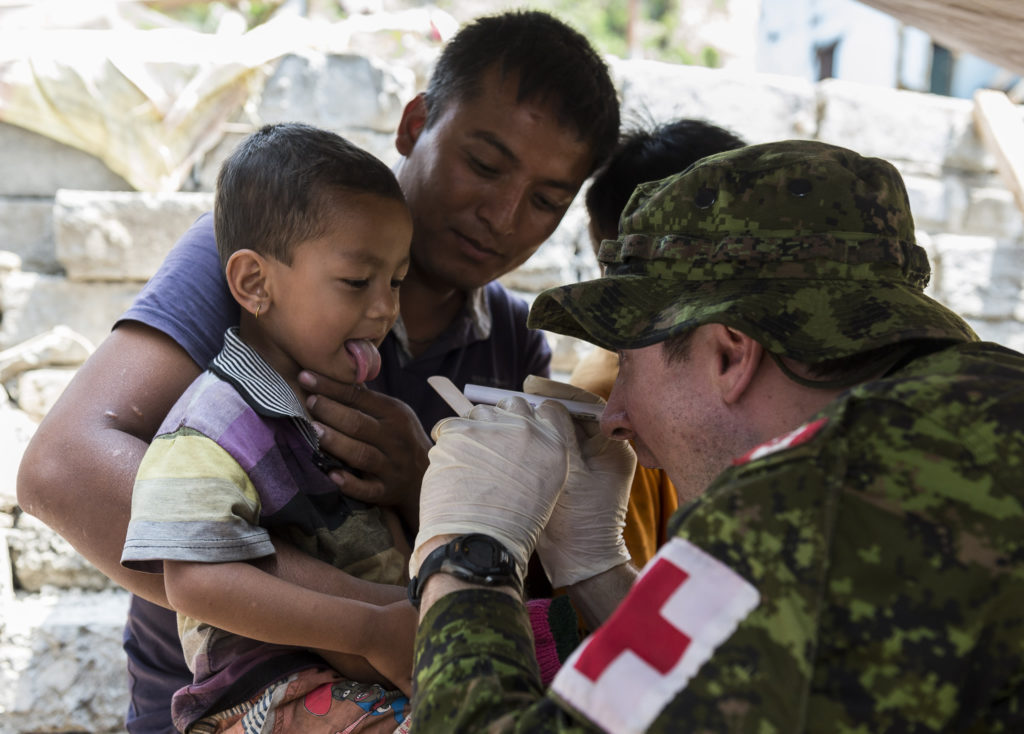 Captain Jonathan Bishop, a doctor with the Canadian Armed Forces Disaster Assistance Response Team, treats a child in the village of Balephi, Nepal, in May 2015.
MCpl Cynthia Wilkinson/Canadian Forces Joint Imagery Centre
Authors Christian Leuprecht and Peter Kasurak, both Royal Military College professors, reported that the Forces performed 30 domestic missions between 2011 and 2020 compared to six between 1990 and 2010.

For the military, firefighting and flood management is “now becoming a routine occurrence, which it had not been in the past,” the former chief of the defence staff, ex-general Jonathan Vance, told the Commons defence committee in 2018.

So much so that military plotters have factored seasonal disasters into their annual planning cycles. In March-April, it’s floods; July-August, wildfires.

By December 2019, the domestic demand had become so great the army chief, then-lieutenant-general Wayne Eyre (now CDS) said: “If this becomes of a larger scale, more frequent basis, it will start to affect our [combat] readiness.” 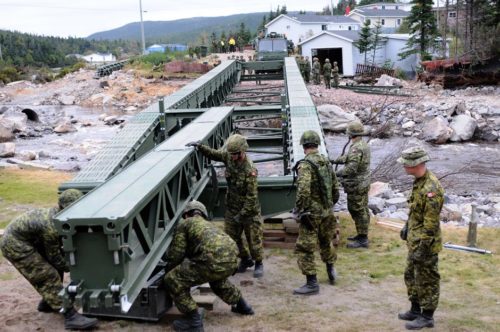 Long-term care homes were hardest hit as the first waves of the pandemic swept over the country in early 2020. And who did Ottawa turn to as evidence of neglect, even abandonment, emerged from facilities in Quebec and Ontario? The military.

For weeks, more than 1,700 Forces personnel worked in long-term care homes while another 22,000 CAF members were placed on standby.

Almost two years later, on Jan. 5, with the Omicron variant propelling case numbers to record highs and hospital beds filling up, Ontario Liberal Leader Steven Del Duca called for the military to again be brought in to assist.

The call came less than three weeks after Canadian troops withdrew from British Columbia, where they had been delivering food, evacuating chickens (and people), and saving 26 dogs after flooding cut off all road access between Vancouver and the rest of the country.

In 2021, CAF domestic crisis relief also included flooding in the Yukon and Newfoundland; tainted water in Iqaluit; and wildfires in B.C., Manitoba and northwestern Ontario.

David Redman, a retired lieutenant-colonel who authored Alberta’s pandemic influenza response plan in 2005, suggested re-calling soldiers to COVID-19 duties would be folly—in spite of past surveys suggesting nine in 10 Canadians support it.

In a wide-ranging interview with the Toronto Sun, Redman said the military has largely civilianized its medical system. It has few doctors, nurses and medics of its own and relies on provincial systems when faced with internal challenges.

Appointed counterterrorism chief in Alberta the day after 9/11 and later head of the Alberta Emergency Management Agency, Redman explained that a pandemic is a whole-of-society emergency, not just a health issue.

He told the Sun that Ontario Premier Doug Ford erred when he put the chief medical officer in charge and essentially ignored Emergency Management Ontario.

“They have not been allowed to do anything,” said Redman. The agency has in the past co-ordinated responses to floods, tornadoes, terrorism, nuclear accidents and even pandemics.

“They could bring process and logic to the issue, and they’re sitting there and waiting to be told to take over co-ordination of the pandemic,” Redman told the newspaper. “They can’t do that until the premier forms an actual task force on the pandemic which represents all of industry.”

“The program was a dismal failure,” they wrote.

During his CAF career, Redman responded to disasters worldwide. He said he has seen few best practices rolled out to deal with COVID-19. “In two years, the people that are in charge have completely shown themselves incapable of even managing their own system,” he contended. 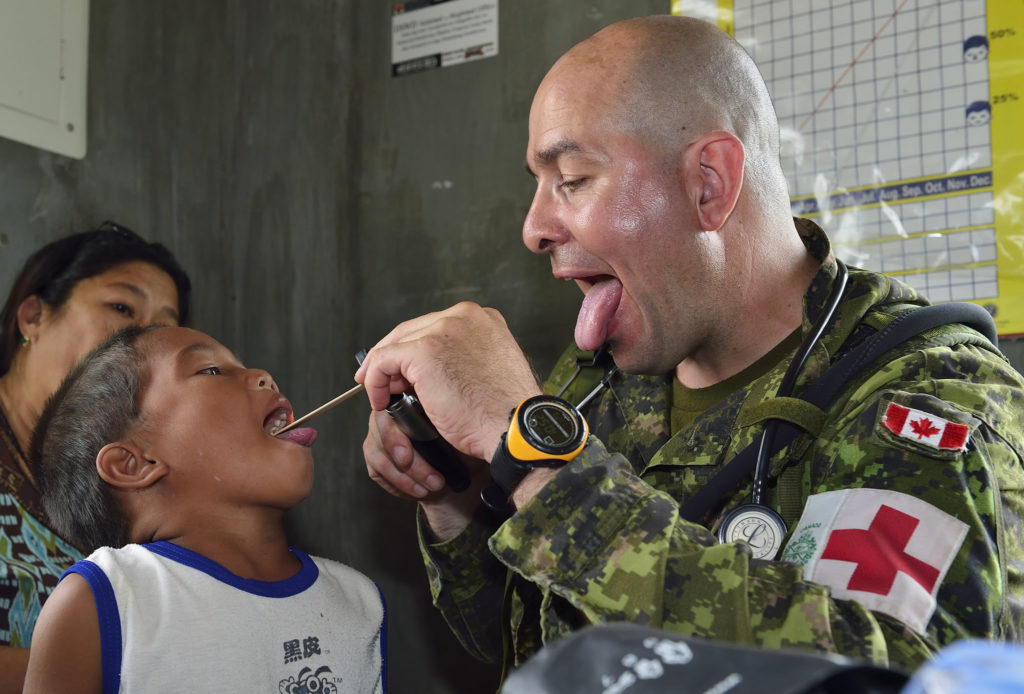 Master Corporal Stephane Fortin, medical technician for the 2nd Field Ambulance out of Petawawa, Ont., examines a child during 2013 typhoon relief efforts in the Philippines.
M.Cpl Marc-Andre Gaudreault/Canadian Forces Combat Camera
According to Leuprecht and Kasurak, the CAF has “vehemently resisted anything other than a combat role since the late 1950s.” That’s when the Diefenbaker government, appalled by models of what a nuclear war could do to the country, instituted a “national survival” program, and gave it to the army to run.

“The program was a dismal failure,” they wrote.

“Both the Regular Force and the reserves, which were supposed to implement the Special Militia Training Program, disdained the mission while the government underfunded it.” 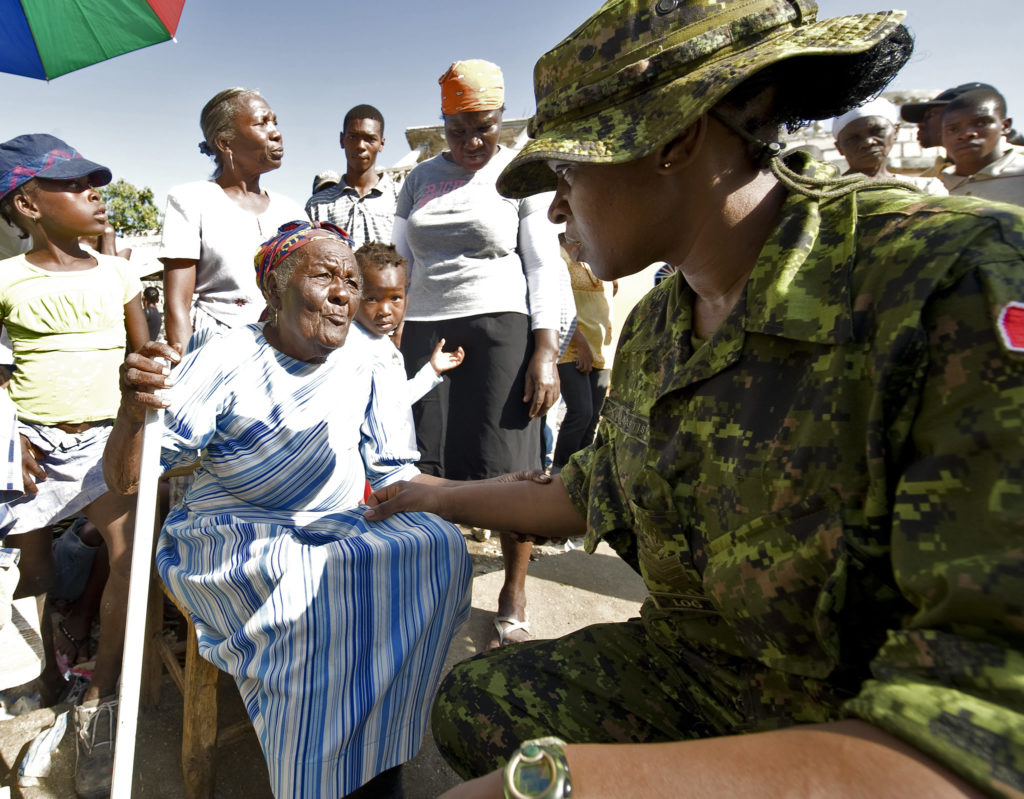 Sergeant Viviane Jean-Baptiste translates for patients seeking treatment after a 2010 earthquake in Haiti.
Sgt. Bruno Turcotte/Canadian Forces Combat Camera
In a 2020 paper for the Conference of Defence Associations Institute, authors Adam MacDonald and Carter Vance said COVID-19 “represents the continuation of a larger trend in terms of ever-increasing demand for CAF support to domestic emergencies.”

“Such domestic demands question the organization’s ability to meet these requests alongside other defence duties,” they wrote, urging a high-level review of Canada’s COVID-19 response once the pandemic subsides.

“Such a review will touch on many aspects, including but not limited to public health, federal-provincial responsibilities in terms of emergency management, and the effectiveness of social programmes in responding to the economic fallout.”

They said it must also address “the CAF’s domestic role and the distribution of duties, mandates, and resources for the organizations in Canada’s security communities.”

“For too long, the question of what Canadians expect from their military, and to what extent they are comfortable with military personnel operating on the Homefront in peacetime, has gone without serious consideration,” they wrote.

“Rather, this drift into serving as the de facto disaster response option for the federal government has been a result of reflexive policy-making without a clear vision of the future. The COVID-19 pandemic is not the first scenario to raise these questions, but it could prove definitive in charting the path forward.”