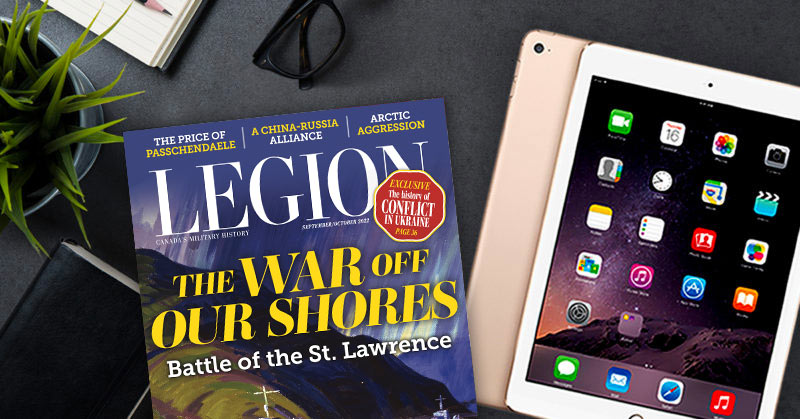 “My late husband was a veteran and he received Legion Magazine,” wrote Maureen Anderson of Oromocto, N.B. “After he passed away, I just kept renewing it.”

We received many such heartwarming comments from readers of how the publication continues to keep them connected to family military service—among a wide range of other feedback—in our most recent reader survey.

Conducted earlier this year, the review received a great response, with 2,882 readers replying. Thank you. Your observations are critical to helping us continue to improve the magazine.

For example, several respondents were eager to see content that will help engage younger readers and newer veterans. We’ve ‘a lot’ of ideas and plans in place to address this in coming issues.

Survey respondents were entered into a draw for one of 10 prizes.

The grand-prize winner was Kelly Mason, of Stittsville, Ont., who received a MacBook Air laptop computer (13.3-inch display and 256 GB).

The second-prize winner was a resident of Nova scotia, who received an Apple iPad.

The third-prize winner was Warren Oda, of Dundas, Ont., who received an Apple Watch.

The $250 winner was Alain Fortier, of St. Catherines, Ont.

The $100 winners are Brian S. Magee of Lindsay, Ont. and John McNair of Kingston, Ont.

You gave us an 83.9 per cent approval rating

We asked readers to rate subjects, features, columns and sections. Once again Remembrance led the way with a 95.5 per cent approval rating. It was followed closely by stories about Canadian military history (94.1 per cent) the Second World War and modern conflicts, the later duo both garnering a 93.4 rating.

Our columns “Canada and the new cold war” by J.L. Granatstein and “Eye on defence” by David J. Bercuson, which ranked fifth and seventh overall, saw the largest increase in ranking from our 2018 survey, jumping 17 and 7 spots respectively. Pictorials landed between those columns in sixth, all three in the 88 per cent rating range. The “News” section was rated at that level, too, followed closely by the “On this date” at 87.7 per cent. Overall, you gave Legion Magazine an 83.9 per cent approval rating.

In addition to helping us improve content, the survey’s responses provide our team with more information about a typical reader’s household. For instance, nearly half of you live in communities of 50,000 people or fewer. Nearly 46 per cent are veterans and almost 78 per cent are male. Legion Magazine readers are also avid travellers, with more than 90 per cent reporting they are planning a getaway in the next two years.

Perhaps most interesting to us, however, is the time you spend reading Legion Magazine—
85.6 per cent of you report perusing the publication for more than an hour; 38 per cent spend more than three hours with each issue.

Such information also helps us attract advertising, which is crucial to our economic success. Ad revenue helps keep the subscription price low, at only $9.49 per year.

All in all, the majority of comments we received were positive—words such as good, great, enjoy and love collectively appeared hundreds of times in your feedback. And your criticisms were constructive.

Many readers even thanked us for what we do. The gratitude, however, belongs to you—a magazine is nothing without its audience. Legion Magazine subscribers consistently show us one of those most critical of military values: loyalty. For that, we are truly grateful.

Your insights on Legion Magazine:

Legion Magazine fills many gaps in our social and cultural history, besides reminding us of military operations of the past, present and commitments to the preservation of security and peaceful co-existence.
Duncan Matheson, Midland, Ont.

I love this magazine with all the historical stories. It really helps me, as the Legion Chaplain, understand what our veterans have gone through in the past and today.
Major Rick Robins, Melfort, Sask.

My older sister was in the air force. She bought my first Legion membership for my birthday when I turned 18. I have kept it current for 47 years. It helps remind me to honour my sister, father, uncles, great uncles and all who served in our military.
Kim R. Bossenberry, Craik, Sask.

As the son of a Canadian-born Second World War veteran, I take interest in what veterans went through. Legion Magazine is a great way to keep memories alive and recognize the Legion’s contributions to society.
Phil Nelson, Sarnia, Ont.

Legion Magazine connects me to my family history and to my heritage. With two children presently serving, Legion Magazine helps Grampa relate to their service!
William Crozier, Westport, Ont.

I think more should be done on recent deployments. Articles about current members and life in the armed forces would be helpful to those considering joining.
Michael Douel, Simcoe, Ont.

It is the one magazine I read cover to cover. I find the investigative articles very well written.
Mark Legge, Canning, N.S.

My late father served in the Royal Canadian Air Force from the Second World War through the late 1960s and never really talked about it much. This magazine allows me a glimpse at some of the things he would have experienced. I also have worked directly with several veterans so more recent military topics interest me.
Ron Story, Calgary

I find the magazine in general serves an older population. Younger veterans do not feel much connection.
Karl-Frederic Major, Burk’s Fall, Ont.

Love the magazine. I look forward to each issue.
Carl Myers, Charlottetown

Great magazine, especially for my needs as a history teacher. For my students, I use a lot of the “Face to face” articles for discussion. These articles have been invaluable to create great discussions with a lot of critical thinking.
James Knihniski, Langley, B.C.

I would like to see more and better maps. Steven Mintz, Winnipeg

I am the president of Metropolitan Branch in Windsor, Ont., and find the information in the magazine helps broaden my understanding of veterans’ issues so I can serve them better.
Tom Friesen, Tecumseh, Ont. 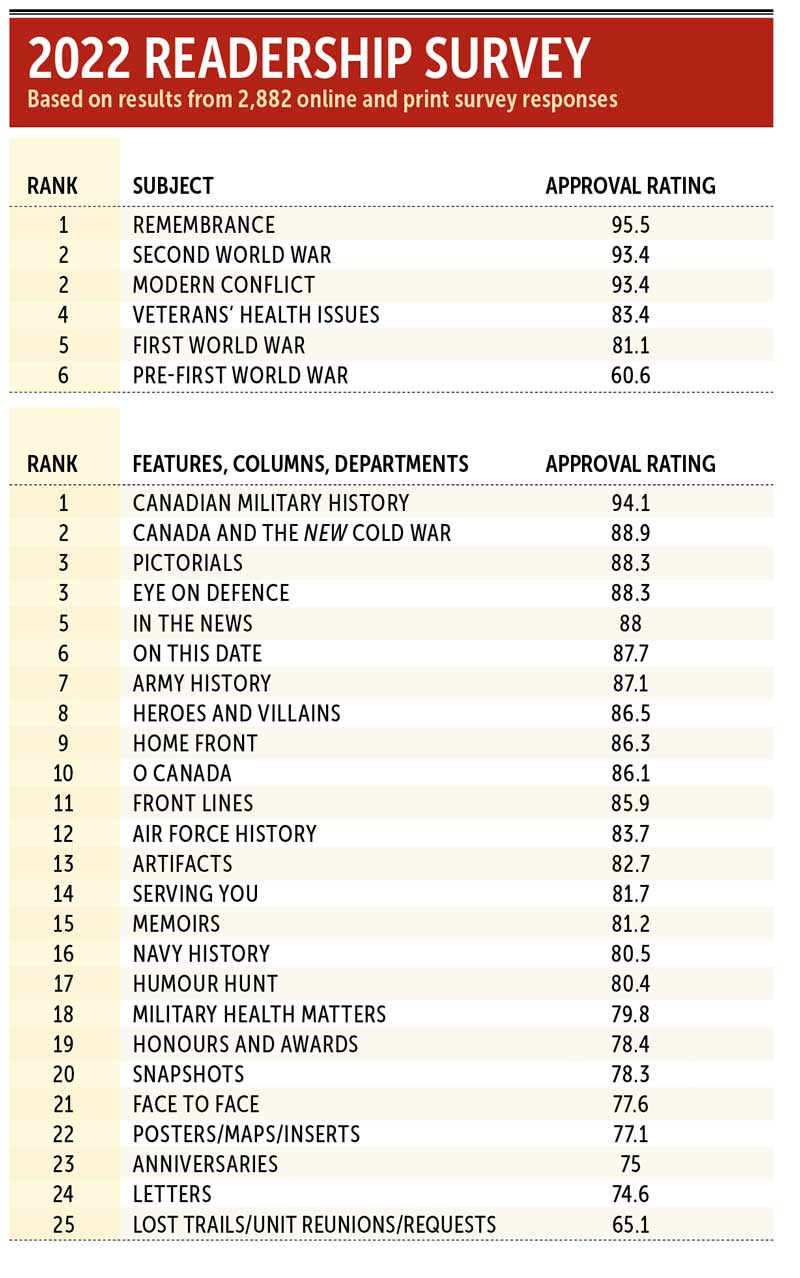