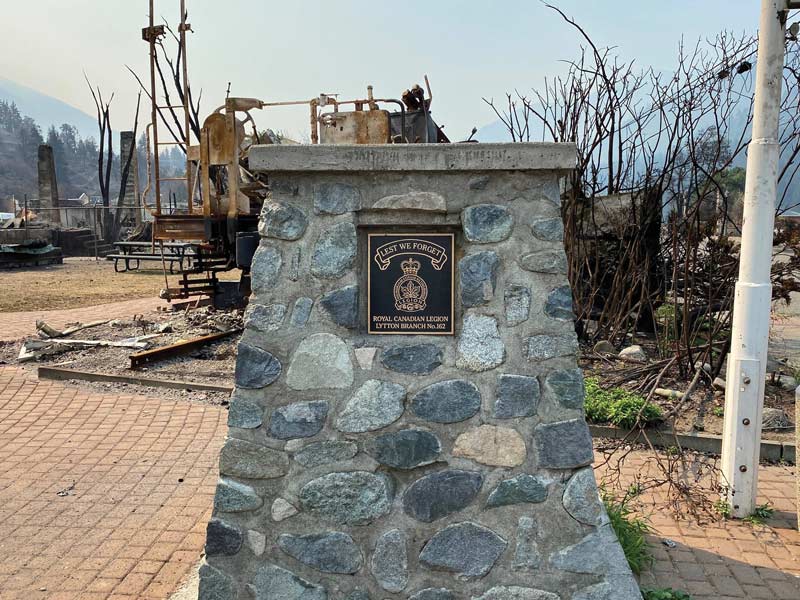 The cenotaph at Lytton Branch was unscathed by the wildfire that ravaged the village.
BC/Yukon Command

Lytton, B.C., was devastated by wildfire on June 30.

The hospital, ambulance station and pharmacy were destroyed.The bank, museum, coffee shop, both grocery stores, all gone. And with them, Lytton Branch of The Royal Canadian Legion.

“It’s going to be a challenge,” said Branch President Sheila Maguire in an interview with Legion Magazine  in August. “But we’ll forge on.”

The outer walls of the building have collapsed. “We won’t be salvaging anything,” Maguire said.

At the end of August she was sorting out insurance issues, too busy to think too far ahead. But she hopes a new building is in the future for the branch, a meeting place for the town’s 250 or so residents and about 2,500 people who live up and down the valley.

“In its heyday, the place was hopping,” she said. 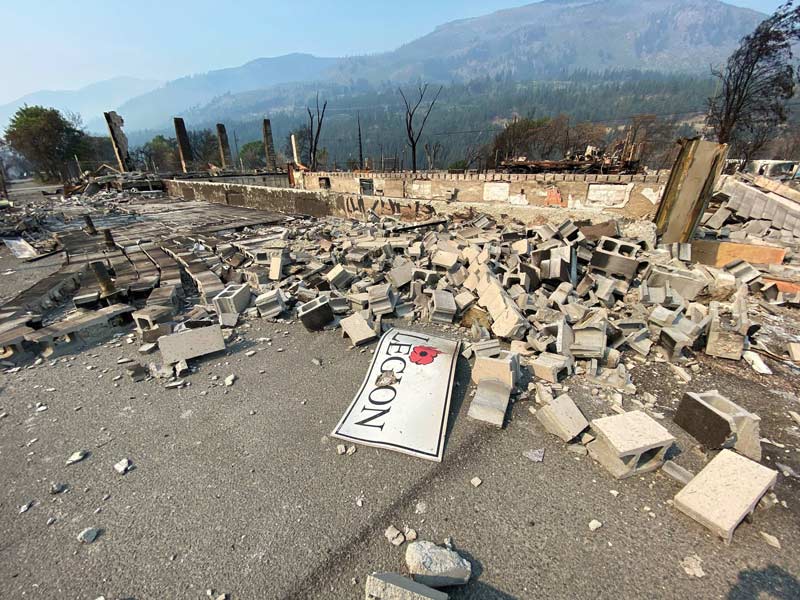 The branch was one of many buildings burned to the ground.
BC/Yukon Command

A decade ago, the branch was located in the basement of a building that had once been a movie theatre, and then housed a liquor store. The branch was in debt and the future looked uncertain, but some determined members paid the utility bills, loaned money to keep the bar supplied and volunteered to keep it running. The branch staged potluck-like dinners that slowly replenished the coffers, enough to support $65,000 in renovations.

It burned down just days before the reopening.

When the liquor store moved out, the branch decided to take over the upstairs space too, undertaking a further $85,000 in renovations, including a new heating system, new wiring, new plumbing, new insulation, furnishings, kitchen equipment and flooring.

The building was meant to be the hub of the community, a place for weddings, reunions, meetings and to hang out.

It burned down just days before the reopening.

Money to fund the venture is only part of the challenge to rebuilding, said Maguire, who was elected president in 2016 just as the second phase of renovations began. Construction projects in small towns remote from large population centres—not to mention home improvement stores—are difficult.

“We don’t have access to a huge number of builders, labourers, plumbers, electricians. And did they just get burnt out, too?”

Getting materials and workers to the town, located on the Trans-Canada Highway 160 kilometres southwest of Kamloops, will be a challenge. Kamloops, the nearest large population centre, is booming, causing a shortage of skilled trades workers in the area.

Several fundraisers have been held in British Columbia to help the branch recover. Branches that want to donate to the cause can send funds to BC/Yukon Command earmarked for Lytton Branch No. 162. The funds will be held in a trust until the branch can use them.