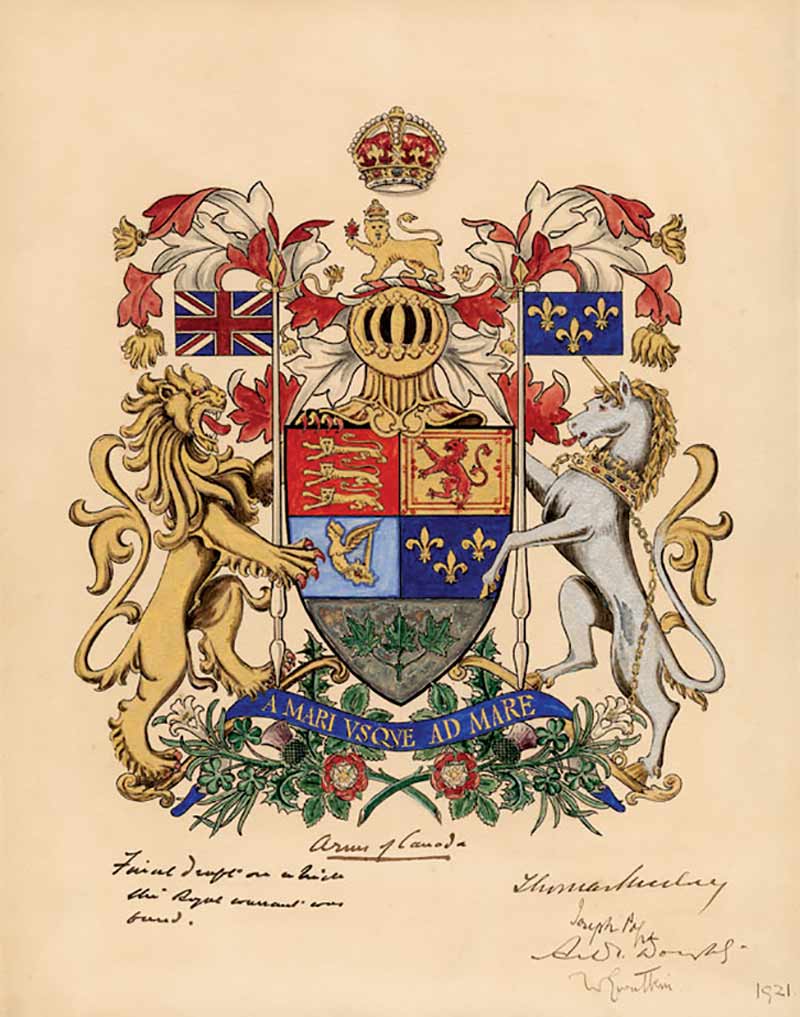 The Canadian version evolved over 150 years and its evolution was as complicated as the country’s.

The idea of a coat of arms originated in medieval Europe. The name was literal: a fabric that went over armour bearing the insignia of the realm. Its original purpose was to discern friend from foe in battle and to identify the dead. Over the centuries, they came to identify other things: families, professions and property ownership among them.

They also became incredibly intricate. Often, a shield remained the central feature, divided into chief and base (top and bottom) as well as sinister and dexter (left and right). The Royal Arms of the United Kingdom features a shield that shows England (three leopards), Scotland (a lion) and Ireland (a harp). It is encircled by the Order of the Garter and its biblical motto: Honi soit qui mal y pense (“shamed be who thinks evil of it”).

The Canadian version evolved over 150 years and its evolution was as complicated as the country’s. Newfoundland and Nova Scotia were the first to get coats of arms, awarded in the 17th century. A year after Confederation, a royal warrant granted arms to Quebec, Ontario, New Brunswick and, once more, to Nova Scotia. The Great Seal of Canada incorporated these provinces and that stood as the nation’s coat of arms. As the country grew, so did the coat of arms and by 1915, it was crowded with symbols for all nine provinces.

In 1919, a committee decided that a new Canadian coat of arms would use the British version as a model. The next step was to take the modified design to Britain and present it to the Garter King of Arms, who oversees heraldry, of which the U.K. has no shortage. He wasn’t happy with the idea, but Winston Churchill helped push the new design through, and on Nov. 21, 1921, King George V granted Canada its own armorial bearings (above).

The Canadian design borrowed the lion on the left, the unicorn on the right and the crown floating above it all from the U.K. coat of arms. But the Canadian version also has a recognition of France, and the lion is pointing to three maple leaves with its right paw. The leaves were originally green but were changed to red in 1957, essentially conferring our official colours: red and white. The crown was also modernized, updated from the Tudor era. The motto read A mari usque ad mare (“from sea to sea”).

As our status changed, so did the coat of arms. In 1982, the repatriation of the Constitution was recognized by adding the motto of the Order of Canada—Desiderantes meliorem patriam (“they desire a better country”)—though it wasn’t until 1994 that the Queen finally approved it for general use. In 2008, a motion was introduced in Parliament to change the design to incorporate Indigenous peoples, though such a change has not been made.

The coat of arms is on the first page of a Canadian passport, and if one were to look closely and squint, the phrase “a lion rampant within a double tressure flory-counter-flory gules” is present in the arcane language of the original 1921 charter. It signifies that the bearer of the passport is travelling under the aid of the Crown. Just don’t expect Prince Charles to help you with your carry-on.