Home » Our Veterans » News » Young artists showcase the will to remember

Young artists showcase the will to remember 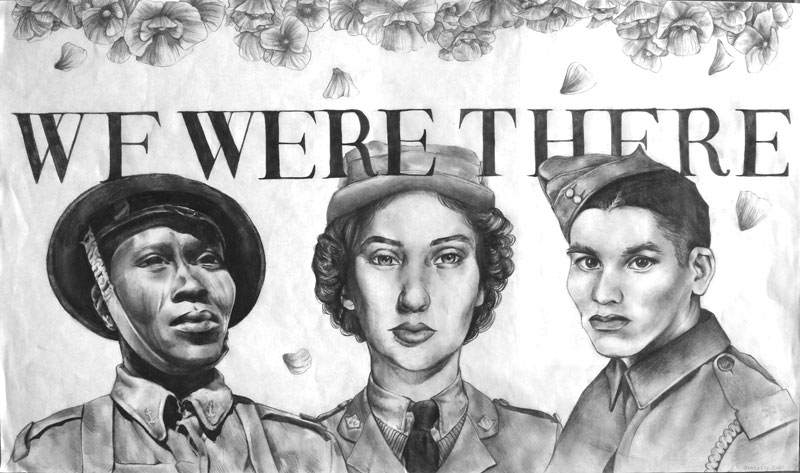 Emily-Ann Alyward had three great-grandfathers and a great-grandmother who served during the Second World War, but they were not the inspiration for the work that earned her first place in the 2021 senior black and white poster contest.

Her inspiration instead came from her circle of friends and three British Columbia communities—Ladysmith, where she lives, Duncan, where she graduated from Duncan Christian School, and Nanaimo, where she intends to study graphic design at Vancouver Island University.

“Multiple cultures and people served, and their stories deserve to be told.”

The southeastern coast of Vancouver Island is home to more than a dozen First Nations and is steeped in Indigenous history; yet not much is known in wider society about Indigenous peoples’ wartime contributions.

White faces are most commonly shown in connection with military service and commemoration, said Alyward.

“I wanted to show the diversity,” she said. “Multiple cultures and people served, and their stories deserve to be told.”

Under the headline “We Were There,” her poster features portraits of three people in uniform: a Black man, a Caucasian woman and an Indigenous man.

More than 100,000 students across the country entered the annual poster and literary contests sponsored by The Royal Canadian Legion, drawing their inspiration from family and community history, the emotions surrounding remembrance as well as historic and contemporary events.

Louise McCrow, whose colour poster placed first in the senior category, found her inspiration in youth and peace. 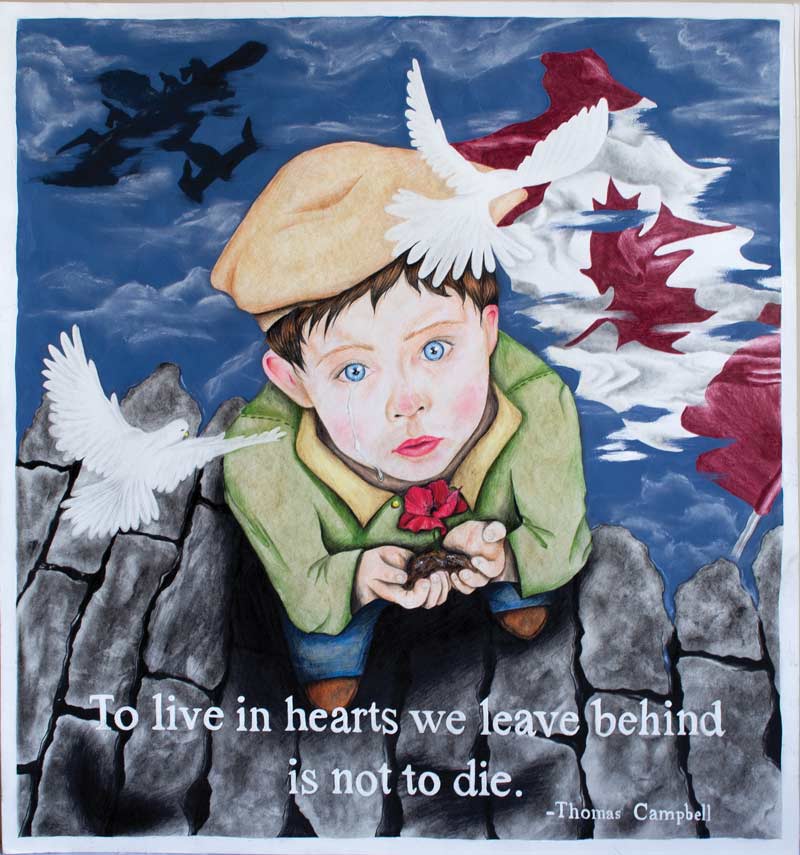 Louise McCrow of Campbellford, Ont., chose the theme of youth and remembrance in her first-place senior colour poster.
Louise McCrow

Her evocative poster encapsulates one postwar reality—in peace, children are left to remember.

The central image is a small child, cupping some dirt from which a poppy grows. Overhead fly doves of peace, and in the water are reflected an aircraft and a Canadian flag.

At the bottom of the poster is the quotation “To live in hearts we leave behind is not to die.”

“I wanted some Canadian symbolism,” said the Grade 10 student from Campbellford, Ont. “And I thought since it is a youth competition, incorporating children into the poster would be an interesting take on it.”

McCrow is a three-time national finalist. As an intermediate, her black and white poster finished second in 2019 and in 2020 her colour poster placed first. She looks forward to entering future contests. 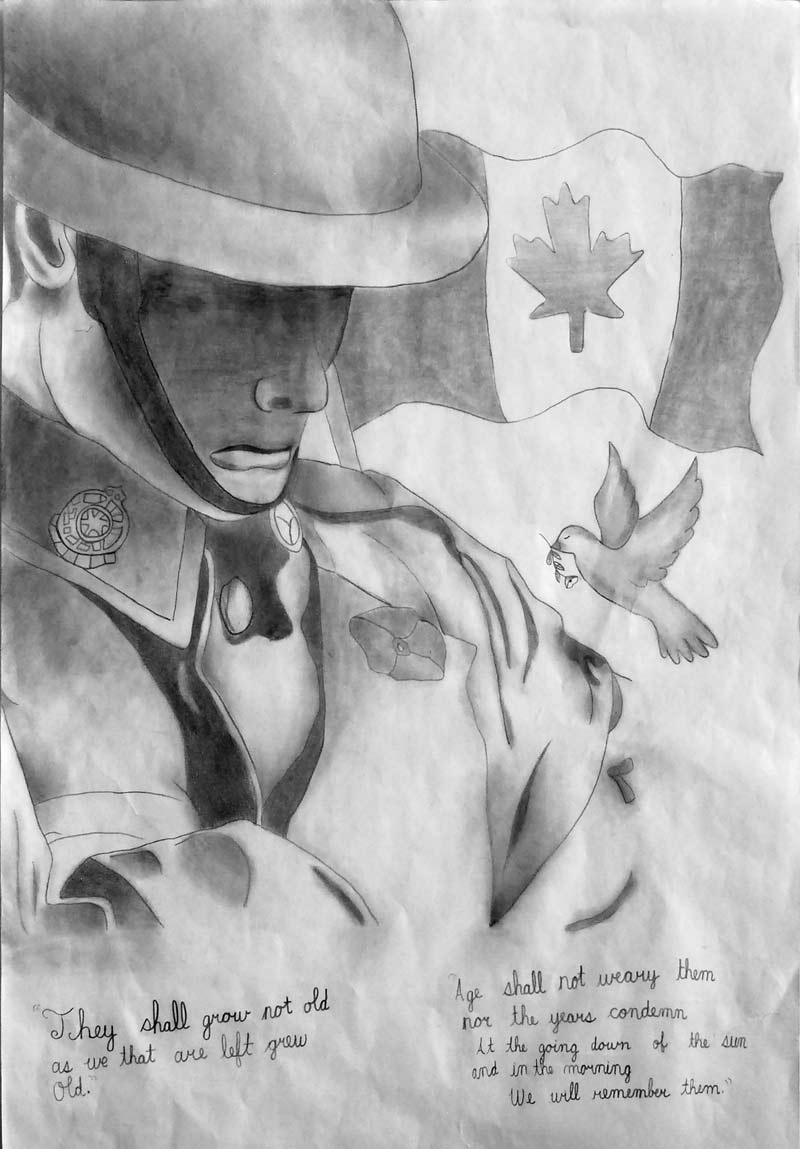 But this is the last year of competition for Taylor Wakelin of Wilkie, Sask., who has entered the contests “for as long as I can remember.”

Wakelin’s first-place senior poem focuses on a common November habit for many Canadians:

On that one special day, we don red poppies proudly on our breast,

But when the ceremony is over, we leave them in a drawer for a year-long rest…

It is not enough to show recognition and gratitude once a November.

It is a shame, but we are slowly beginning to forget to remember.

“I decided to write about how we choose to honour those who fought for our country,” said Wakelin, whose great-great uncles Morton and Cecil Irwin served as aero mechanics with the Royal Canadian Air Force’s 433 Squadron in England during the Second World War.

“Those men and women put their lives on the line for Canada, so it’s disheartening to know that some people think of November 11 as nothing more than a day away from school or work.”

Wakelin, a graduate of McLurg High School, plans to pursue an education degree at the University of Saskatchewan. 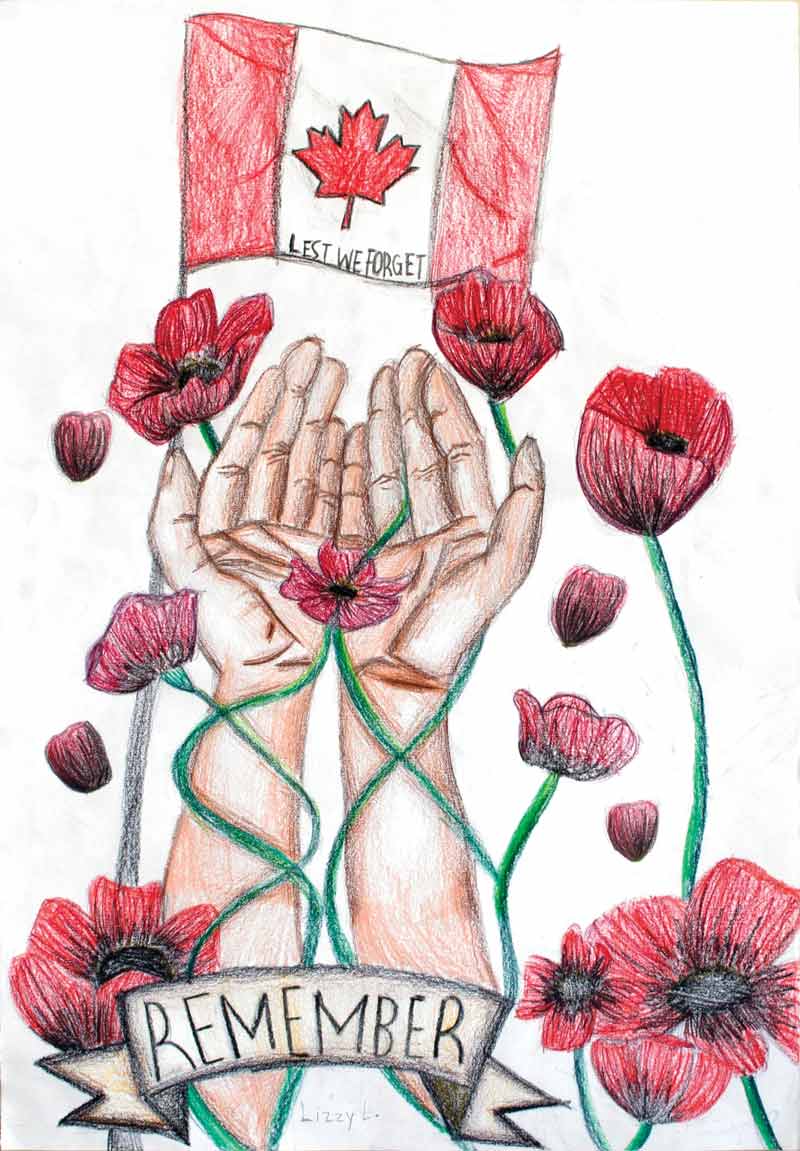 Gabriel Waldner, a Grade 11 student in Holmfield Colony School in Killarney, Man., can’t put a finger on what initially inspired his first-place senior essay, but can describe development of the idea, a journey shared by all writers.

It began with thinking about those willing to give their lives for their country.

The first draft was produced in a couple of hours. Then Waldner “spent a couple of days just revising and editing, thinking it through, making it better.”

The kernel of the idea grew from the fight for freedom to what that legacy means—and it’s more than the liberty to make small day-to-day choices. “They fought for our right of religion. They died for our right of speech.” And something more: “Canadian women, Canadian men, gave their lives so that people all around the world could reside in peace and freedom.”

And when they returned home, they still had work to do.

“Like a horse surging ahead after being given free rein,” he wrote, “Canada flourished and thrived after the war.” 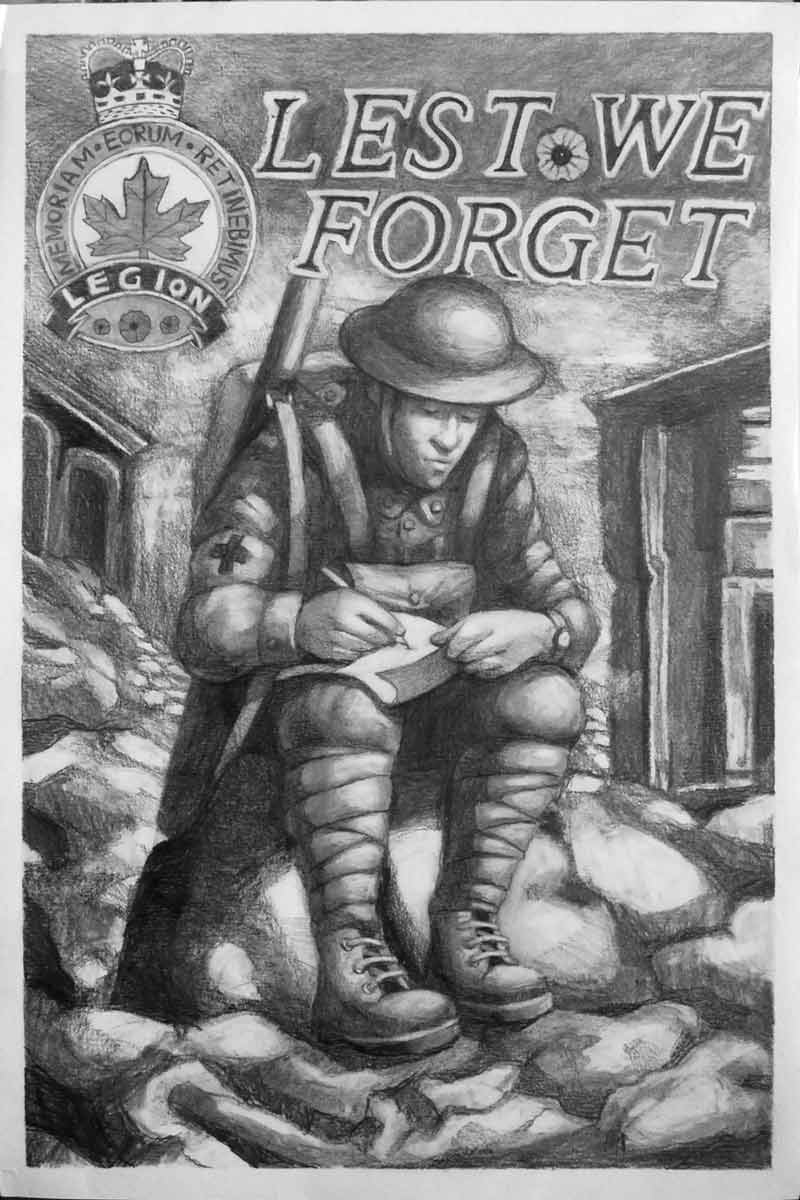 Chelsea Thompson of Botwood, N.L., turned inward for inspiration, to her love of dogs. Her first-place junior essay explores the life of a four-legged Newfoundland hero.

“Dogs fought in the war, and I was thinking of something unique to write about,” said the Grade 6 student of Botwood’s Memorial Academy, whose ‘big pop’ (great grandfather) served as a forester in the Second World War.

She tells the story of Gander, the Newfoundland dog who became the mascot for the 1st Battalion, The Royal Rifles of Canada. Given the rank of sergeant, Gander accompanied the troops on their doomed mission to Hong Kong in 1941 and joined in the fight as the Japanese invaded.

“He ran at any Japanese soldiers” and nipped at their heels, she wrote. Gander was so fierce, enemy soldiers called him ‘Black Beast’ and thought the Allies were training wild animals for warfare.

Like so many of his human comrades, Gander did not survive the battle. He grabbed a live grenade and ran away with it, saving the lives of seven soldiers. Gander was recently awarded the Dickin Medal, popularly known as the Victoria Cross for animals. 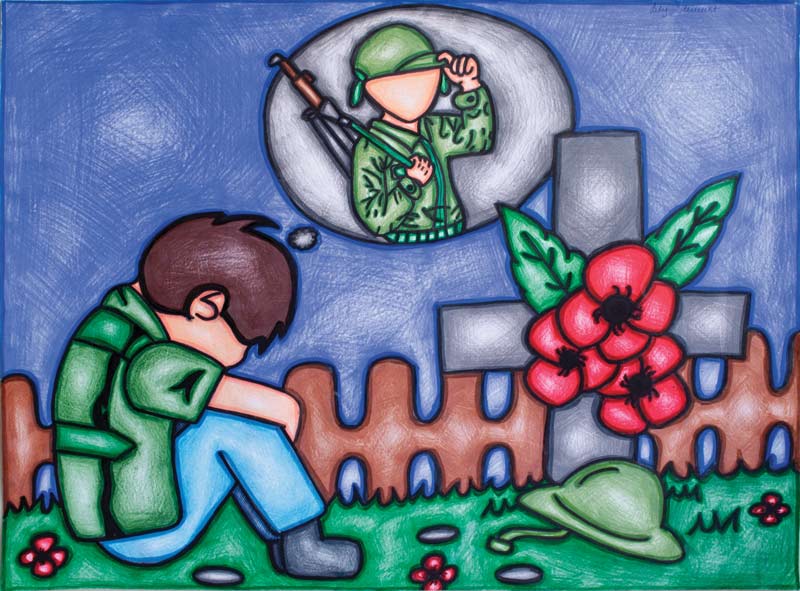 Family history was the inspiration for Joshua Philip, a Grade 8 student from Rosslyn, Ont., who wrote about his great-grandfather, who enlisted in the British Army in Singapore to fight the Japanese during the Second World War and was captured and taken to a brutal prisoner of war camp.

“In these camps, 30 per cent of the prisoners lost their lives as a result of malnutrition, diseases such as malaria and Japanese cruelty. Luckily, my great-grandfather survived to tell his story.”

That story, wrote Philip, “helps me understand the travails that young men and women, some only a few years older than me, suffered across the world. We are all entwined in one way or another. It is our job to understand and acknowledge our similarities.” 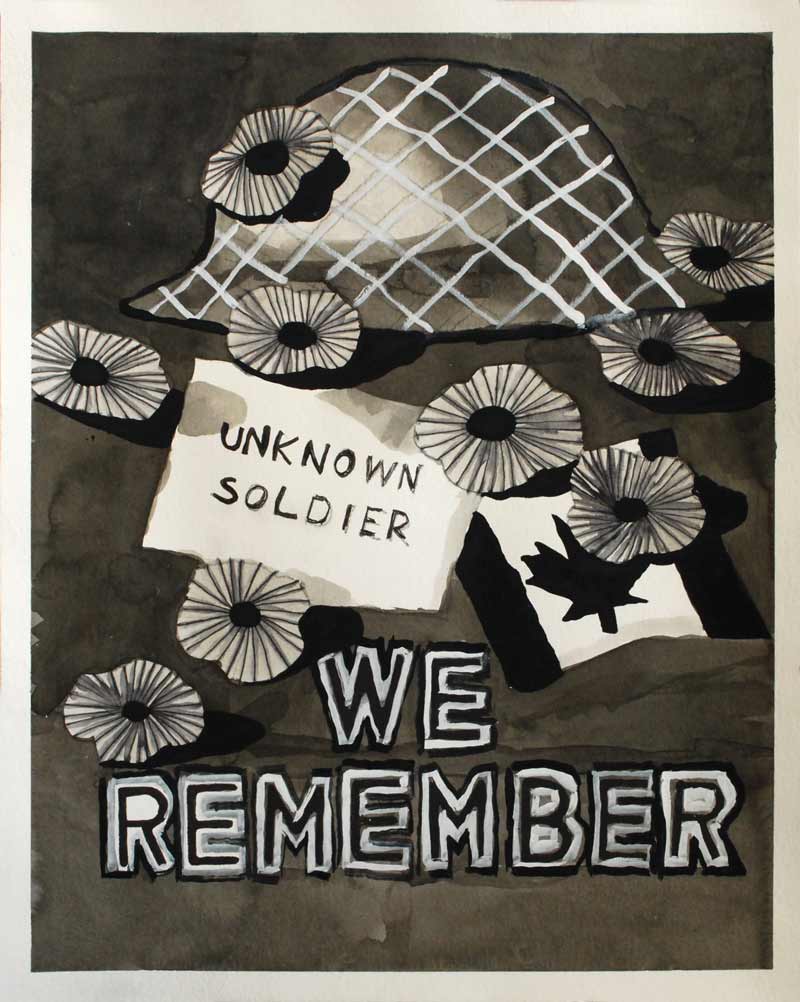 The Legion’s annual contests have fostered the tradition of remembrance and inspired generations of students over the past half century.

The contests are open to all Canadian students. Some enter individually, others are part of a whole class assigned once a year to produce an entry.

Entries are judged by volunteers at Legion branches and winners of contests in each age category progress to judging at the provincial level. Winning provincial entries are sent to Ottawa, where national winners are declared and their work is published in a booklet.

The winners of the four senior contests are sponsored by the Legion for a trip to Ottawa where they meet the governor general and place a wreath at the National War Memorial on behalf of the youth of Canada during the national Remembrance Day ceremony. 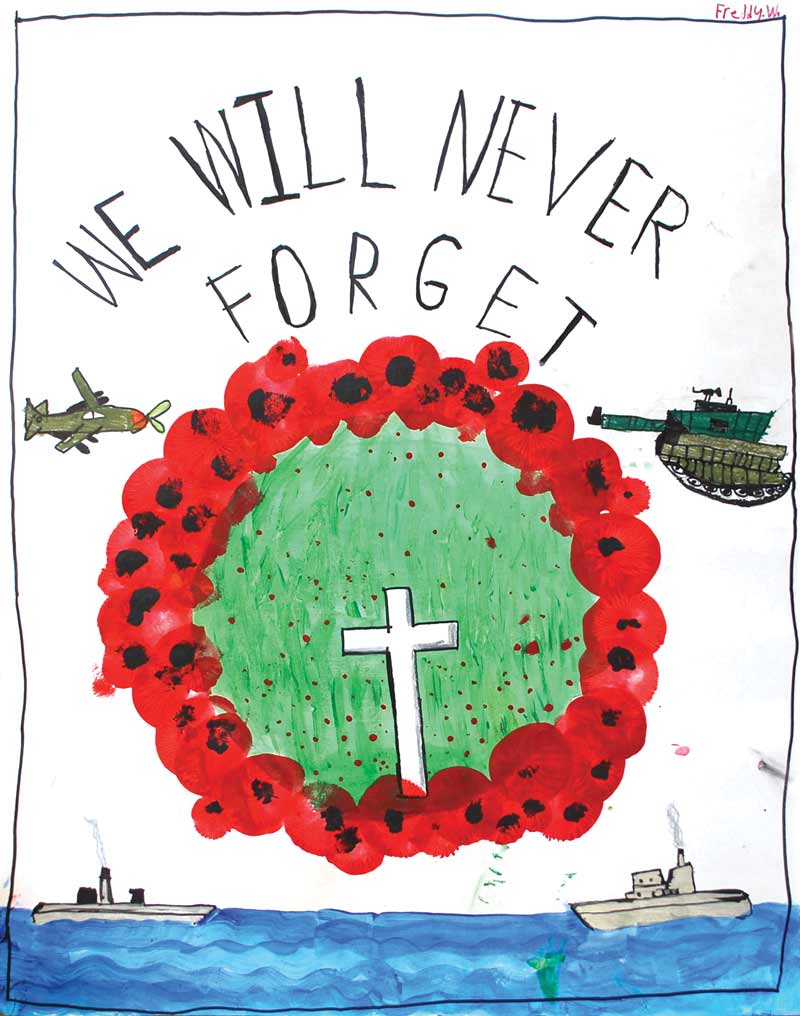