A child runs through the ruins of Benghazi, Libya.
UNICEF/Giovanni Diffidenti
A United Nations fact-finding team has gathered evidence of war crimes and crimes against humanity in Libya, where militias, mercenaries and security forces have been fighting since former leader Moammar Gadhafi was ousted a decade ago.

In what amounts to an interim report to the UN Human Rights Council, the three-member team cites testimony and other evidence of extrajudicial killings, enforced disappearances, torture, rape, and arbitrary arrest and detention throughout Libya—some committed by the former UN-sanctioned government based in Tripoli.

“Since the fall of the [Gadhafi] regime in 2011, the fragmentation of the State and the proliferation of weapons and of militias vying for control of territory and resources has severely undermined the rule of law in Libya,” said the document.

“State and non-State actors alike, from Libya and abroad, are alleged to have taken advantage of this context to perpetrate violations and abuses of international human rights law and international humanitarian law against the most vulnerable, including women, children, members of ethnic minorities, migrants, asylum seekers and internally displaced persons.”

After dominating politics with an iron fist and fostering a bizarre personality cult in the oil-rich North African country, Gadhafi was deposed by opposition forces and later captured at the Battle of Sirte on Oct. 20, 2011, where he was dragged from a culvert, beaten, abused and shot to death.

His body was displayed in public for several days in an industrial freezer in Misrata, east of Tripoli. 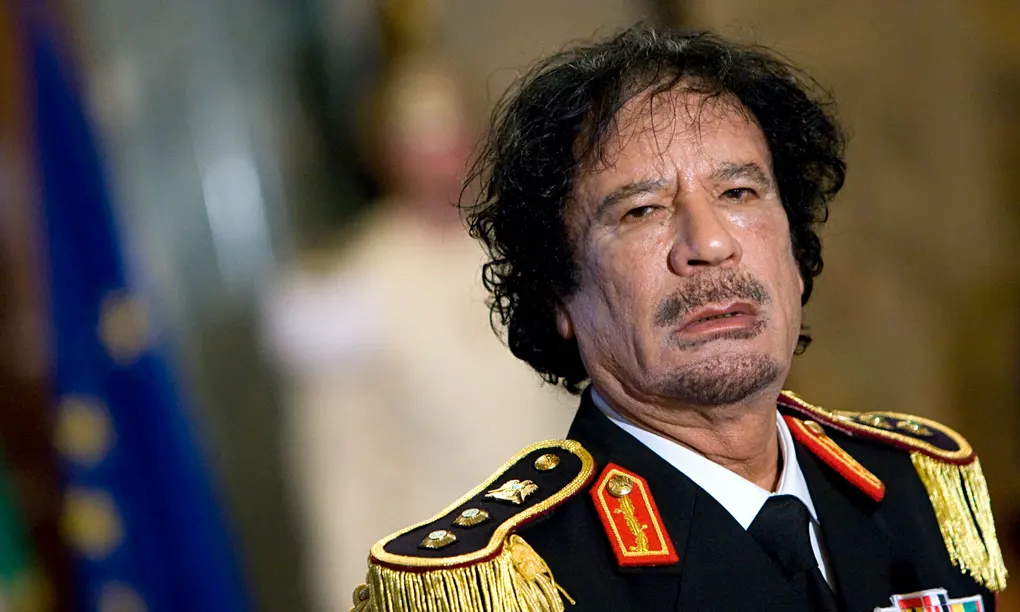 Libya has since been a battleground as armed militias from various regions, cities and tribes struggled for control of or independence from the country of nearly seven million people. The interim government, known as the Government of National Accord (GNA), was one of the chief violators in the years after it was formed under a UN-led initiative signed in December 2015 until it was replaced by a unified provisional government earlier this year—the primary time period under investigation.

Compounding its instability, the country has become a major transit point for refugee claimants trying to reach Europe. Agencies reported that nearly 700,000 migrants reached Italy by boat since 2014, many via Libya, whose Mediterranean coastline is the longest in Africa.

In addition, the UN report said hundreds of thousands of internally displaced Libyans have ended up in areas ill-equipped to accommodate large population movements. They are vulnerable to attacks, sexual violence and abductions.

The state of affairs in the predominantly desert country proved fertile soil for what appear to be many flagrant violations of human rights and security.

It said foreign parties, including mercenaries from Russia, Syria, Sudan, Chad and Turkey, have been involved in what has been technically classified as a “non-international armed conflict.”

While it was unclear whether Syrian and Turkish mercenaries were involved in violations, the investigators reported that Russians from the private military company ChVK Wagner, supporting rebel forces, detained and killed non-combatants in September 2019.

“The evidence gathered by the Mission confirmed that Wagner personnel fired gunshots directly at the victims following their capture and detention,” the investigators wrote.

“There are thus reasonable grounds to believe that Wagner personnel may have committed the war crime of murder.”

The investigators have not established who launched the attacks.

The report said at least 47 health-related facilities and other “objects” were damaged during fighting between the GNA and the Libyan National Army (LNA), which was loyal to elements of the previous government operating out of Tobruk, and other opposition forces between April 2019 and June 2020.

In May 2019, in Twaisha, near Tripoli, an ambulance transporting medical workers and displaying the Red Crescent emblem was fired upon, seriously injuring the driver. The following month, the Al-Khadra General Hospital, Tripoli’s main centre for COVID-19 patients, was hit three times by airstrikes.

The investigators have not established who launched the attacks.

“Schools were also subject to extensive damage and destruction,” said the report. “The Mission investigated the damages to three schools (Bab Ben Ghashir, Alkhalidoon and Attalieaa) as well as the destruction of a warehouse storing millions of textbooks in April 2019.”

On Jan. 4, 2020, at least 25 unarmed students gathered in the courtyard of the Hadaba Military Academy were killed in a missile strike—launched, say reports, by the LNA.

The absence of combatant status in conflicts of this type, said the UN document, means that no one may be attacked unless they are directly participating in hostilities.

“Although the recruitment and training of personnel is crucial to the military capacity of a party to the conflict, the causal link with the harm inflicted on the adversary will generally remain indirect. Only where persons are specifically recruited and trained for the execution of a predetermined hostile act can such activities be regarded as direct participation in hostilities.”

The evidence in the military academy attack indicated the students were undergoing general training under the usual curriculum. The mission found no evidence that they were making preparations for a specific hostile act.

The investigators said the attack likely constituted a serious violation of international humanitarian law and a war crime.

The incidents were wide-ranging and included numerous attacks on civilians from virtually all sides, including the UN-sanctioned government of the day: 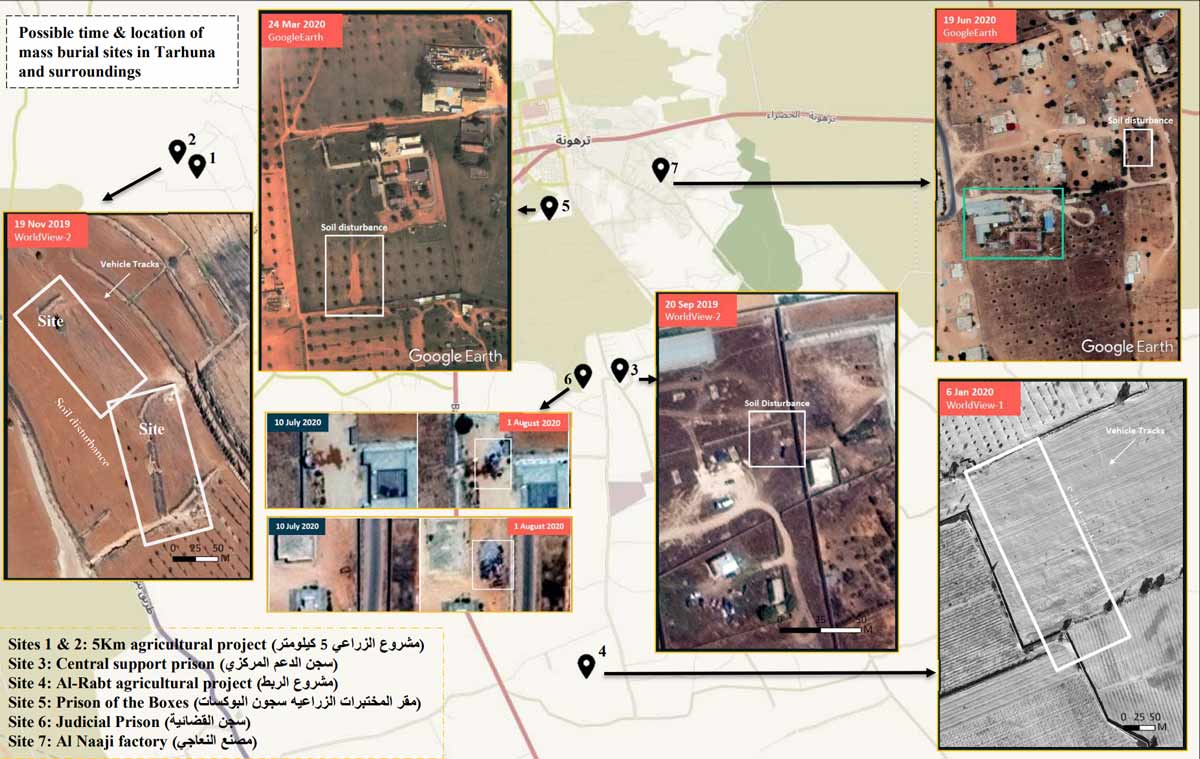 Possible time & location of mass burial sites in Tarhuna and surroundings.
FFM Libya, images from ©2019/20 DigitalGlobe, ©2021 Maxar
The document said state agents or affiliates “routinely use killings non-compliant with the rule of law as a means of punishment or silencing.

“Such killings are a violation of the right to life,” the investigators wrote, “but they may also have a more pervasive impact on other rights, such as the right to truth.

“The Mission noted that recently a number of extrajudicial killings targeted individuals suspected of involvement in serious human rights violations.”

The investigators said they were “facing challenges” investigating reports of extrajudicial killings. They received accounts of abductions, along with evidence of thousands of cases of arbitrary imprisonment and torture, which they described as “an established feature of [the] prison system.”

“The Mission documented several cases of deaths through summary executions, torture, starvation, unsanitary conditions and denial of medical care. Sexual violence is prevalent, in particular during interrogation, and it takes different forms, including rape, threats to rape or coercion into engaging in sexual abuse against other inmates. Women find themselves particularly vulnerable.”

They said the victims include anyone considered “a threat to the leadership of the State.” The majority of victims are civilians.

The document included testimony from ex-inmates.

“We continued to be subjected to torture, but it was medically supervised,” said one man, who had been held in the state-controlled Seket Prison near Misrata. He described suspension, flogging and electrocution on metal beds.

“These acts may amount to crimes against humanity.”

“We were covered with bruises, we were bleeding,” he said, “and when they saw that the suffering had reached a certain critical threshold, the doctor would ask to stop or take a break.… We were tortured about once or twice a week.”

Concluded the investigators: “There are thus reasonable grounds to believe that acts of murder, torture, imprisonment, rape and enforced disappearances committed in…Libyan prisons are committed on such a scale, and with such a level of organization, that they amount, in and of themselves, to a systematic and widespread attack against [the] civilian population.

“As such, these acts may amount to crimes against humanity.”

Sexual and gender-based violence is widespread, “deeply rooted and often hidden” in Libyan society, making it difficult to document.

“Sexuality is taboo and sexual violence carries with it social stigma. Perpetrators appear to abuse this to humiliate their victims. Survivors of sexual violence are scared or ashamed—and sometimes both—to report their case to the authorities or share their experience with others.”

Women have been disproportionally affected by the continuing conflict and the proliferation of militias, said the report, which detailed the July 2019 abduction of parliamentarian Siham Sergiwa and the killing of lawyer Hanan Al-Barassi, both of whom had been critical of the LNA.

“The time is ripe for accountability.”

The main combatants agreed to a ceasefire in October 2020. In March, the GNA and its LNA-supported rival cabinet based in Tobruk formed the provisional Government of National Unity. Presidential and parliamentary elections are expected in December.

The investigators say “the time is ripe for accountability,” though they add they are currently unable to submit a comprehensive report and need more time.

In spite of delays and obstructions, however, they gathered hundreds of documents, interviewed more than 150 witnesses, and conducted investigations in Libya, Italy and Tunisia.

“The current Libyan context was not conducive to witnesses freely sharing information,” they explained. “Indeed, even when a secure channel of communication existed, several individuals declined to engage with the Mission on account of fears of reprisals by State agents or militias.”

Others did not want to relive their trauma, while more were discouraged from coming forward due to the perceived threat posed by government security teams accompanying the investigators.

PrevPrevious ArticlePearson and the peacekeepers
Next ArticleA home for refugeesNext